The JSE’s investment services subsector is made up of a collection of very diverse companies, with interests spanning banking, financial services, education and retail industries. With the exception of Brait and Investec, all the other businesses listed are almost exclusively SA-focused. Independent investment analyst Chris Gilmour describes the subsector as a real mixture. ‘Brait is an industrial holding company – having transformed from a private equity firm some years ago. Its interests span food producers, food retailers, fashion retailers and gyms,’ he says. ‘PSG Konsult is a massive financial services operation while Avior is an investment research house. Purple is largely a stockbroker.’

Brait, with its origins as a private equity fund manager, in 2011 shifted to an investment company. The group has four core investments: Virgin Active, Premier Foods, Iceland Foods and New Look. These businesses seem to not have much in common, but are fairly concentrated in the SA and UK markets. Among its investment criteria, Brait says it looks for ‘primarily majority stakes in quality, market-leading, growth-oriented and entrepreneurially managed private businesses’ and focuses ‘broadly on the consumer sector’.

It acquired its majority in Virgin Active in 2015, just before its planned listing on the JSE and, as at end-March 2018, its 79.2% stake was valued at R17.067 billion. Food producer Premier Foods, with brands including Snowflake, Iwisa No 1 maize meal, Blue Ribbon bread, Manhattan sweets and Lil-lets, was valued at R10.735 billion. UK specialist retailer Iceland, which sells frozen and convenience food, was valued at R6.287 billion.

More than its majority investments in these three businesses, Brait’s valuation (and net asset value per share) hinges almost entirely on UK fashion retailer New Look, which it wrote down to zero as it battles to turn the business around. The company has stated plainly that ‘until such time as its turnaround strategy has taken shape, Brait’s investment in New Look is valued at nil’.

Specialist bank and asset manager Investec, founded in 1974, is in the midst of a leadership transition and in September announced it would unbundle and separately list the Investec Asset Management (IAM) business. It said that while ‘there are compelling current and potential linkages between the specialist banking and the wealth and Investment businesses … there are limited synergies between these two businesses and IAM’. It added that the proposed separation ‘simplifies the group and focuses IAM and the remaining group on their respective growth paths’. 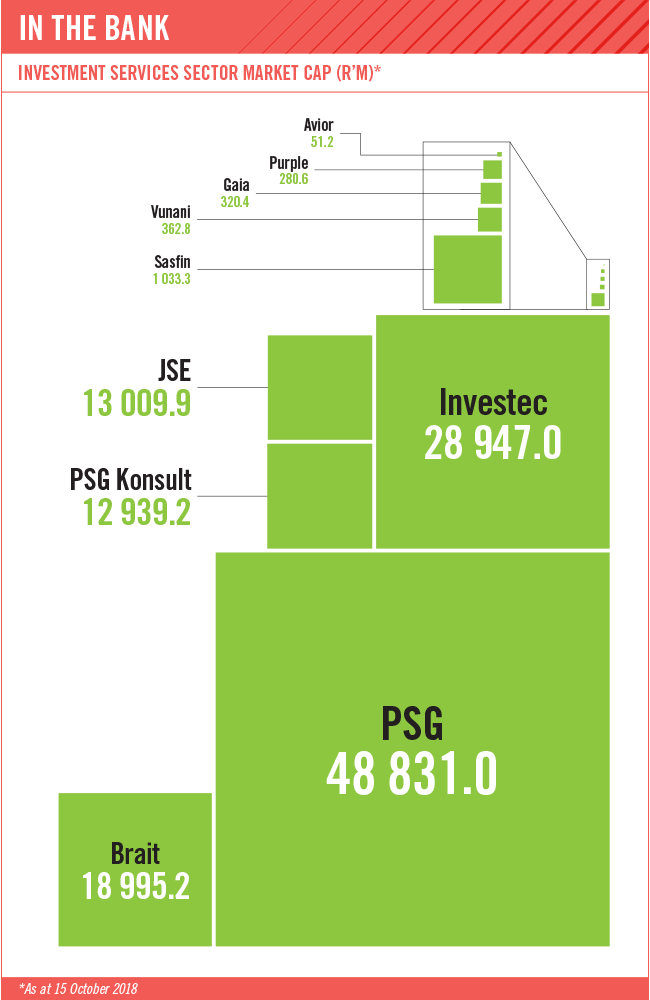 The unit has grown total assets under management to £108.998 million as at end-August, from £103.862 million at end-March. In Southern Africa, assets under management are up from R573.257 million to R646.739 million in the same period. Hendrik du Toit, new joint CEO of the combined business, will return to his role as CEO of the asset management unit post-unbundling, while fellow joint CEO Fani Titi will lead the remaining banking business.

‘What has differentiated Investec from all other banks has been its stellar out-performance in asset management,’ says Gilmour. ‘Listing IAM and Investec separately was always the end game and it will be fascinating to see how the rump – Investec banking – manages on its own.’

In a  mid-September market update, outgoing CEO Stephen Koseff said: ‘On the South African front there has been negative emerging market sentiment. There is continued policy uncertainty. Hopefully that starts getting dealt with. We’re in an election year so that also encourages populist rhetoric. But that has hurt investment confidence and we’ve had a significant weakening of the currency, particularly in the last few months. So growth in that environment is challenging and is being reflected in overall activity levels and performance.’

Sasfin is the other specialist bank listed in this subsector. In the year to end-June, the group reported a 37% drop in headline earnings to R122 million (from R194 million), with return on equity slumping to 8.09%. Sasfin operates three broad pillars: an SME-focused bank (with transactional banking, equipment finance, trade and debtor finance as well as foreign exchange services), a wealth management unit and a capital division.

JSE Limited, operator of the continent’s biggest exchange, is also listed in this subsector. It has a diversified revenue base, with no single unit out of its eight accounting for more than 30% of income. Fundamentally, its revenues are ‘largely driven by activity on the various markets that we operate’. In the first six months of the year, billable equity value traded was up 11%, with equity, interest rate, currency and commodity derivatives contract volumes all higher too.

Writing in the commentary accompanying the group’s results for the six months to end-June, CEO Nicky Newton-King makes the point that ‘the JSE is a largely fixed-cost business’. Last year, it unveiled its strategy to 2022, something necessitated by the ‘changing environment and operating context’. It says ‘the strategy will focus on realising our vision, which is to be the best global platform in emerging markets’. The key elements underpinning the strategy are to ‘put clients at the centre of what we do; operate, to global standards, South Africa’s most trusted, stable, robust and competitive market infrastructure; invest in and retain world-class talent; lead by example on the national agenda, and grow sustainably across the value chain’.

PSG Group has successfully diversified from being almost entirely a proxy for its shareholding in (mostly) market darling Capitec Bank a few years ago. It has pursued entries into the food and agriculture sector (through the Zeder vehicle), private education (through Curro) and uses subsidiary PSG Alpha (98% owned) as an ‘incubator to identify and build the businesses of tomorrow’. The group often refers to the long-term ‘total return index’ differential between it and the All Share Index (Alsi). As at end-February, R100 000 invested in the group in November 1995 (with all dividends reinvested) would be worth R460 million, versus R2 million for the Alsi.

The rump of PSG Group’s value is its 30.7% holding in Capitec, which at the date of the group’s AGM in mid-June accounted for 55% of its total assets (R31.261 billion). PSG Konsult (of which it owns 61.5%) and private education group Curro (55.4%-owned) – which unbundled tertiary player Stadio in October last year – account for roughly a further R7 billion each (approximately 11% to 13%). Agriculture business Zeder (43.7%-owned), with a significant holding in listed Pioneer Foods, is valued at about R4.5 billion, around the same as the group’s private equity-type unit PSG Alpha. 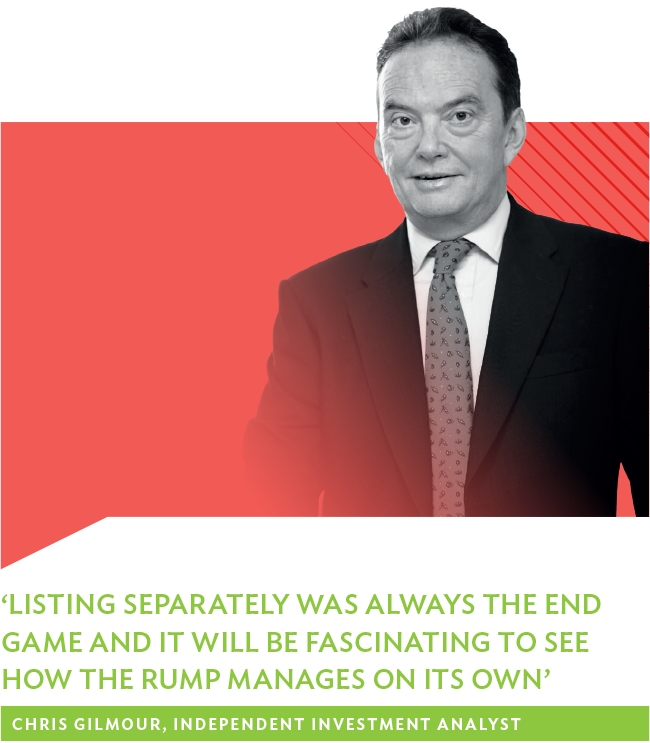 The strength of listed subsidiary PSG Konsult is undoubtedly its network of nearly 800 financial advisers operating at more than 200 offices across SA. Its businesses are structured in three divisions: wealth, asset management and insurance. As at end-February, it had R205 billion in assets under management, with assets under administration of R402 billion. Approximately 60% of earnings are derived from the wealth management business, with asset management comprising just under 30%, and insurance around 12%.

Smaller players Purple Group, Vunani Limited and Avior Capital Markets Holdings are all niche operators in the broader financial services space. At the end of September, these companies had market values of about R280 million, R364 million and R51 million respectively.

Vunani, with interests spanning private equity, advisory and securities broking services as well as fund management, has been well served by its interest in Fairheads Benefit Services. In the year to February, this unit accounted for R124.8 million of the group’s total revenue of R350.9 million.

Avior, which listed on the market in June 2017, says its ‘core offerings’ include investment research, stockbroking, corporate broking and corporate access, transition management and wealth services to institutional, corporate and private clients in SA and abroad. This business generated revenue of R181 million in the year to end-April.

Gaia Infrastructure Capital, which listed in 2015, is a holding company of infrastructure assets, primarily in renewable energy. It acquired the Dorper wind farm (near Molteno, Eastern Cape) in 2016, and bought an effective 20% interest in the Noblesfontein wind farm, located between Three Sisters and Victoria West. Collectively, Gaia’s interest in these assets is valued at more than R760 million.

According to the company, ‘its primary focus, the secondary market in infrastructure equity, continues to present significant opportunities, which are not dependent on whether new infrastructure projects are continually developed. The company’s investment case was buoyed by government’s renewed commitment to facilitate private-sector investment into the selected infrastructure sectors in which Gaia invests, being energy, water and sanitation, and transportation infrastructure’.

Minister of Energy Jeff Radebe in April signed a R56 billion contract to add 2 300 MW of renewable power to the grid as part of the much-delayed bid windows 3.5 and 4 of government’s Renewable Energy Independent Power Producer Procurement (REIPPP) programme. In June, he announced that a further R40 billion to R50 billion would be invested as part of bid window 5 of the REIPPP. This will be launched in November. 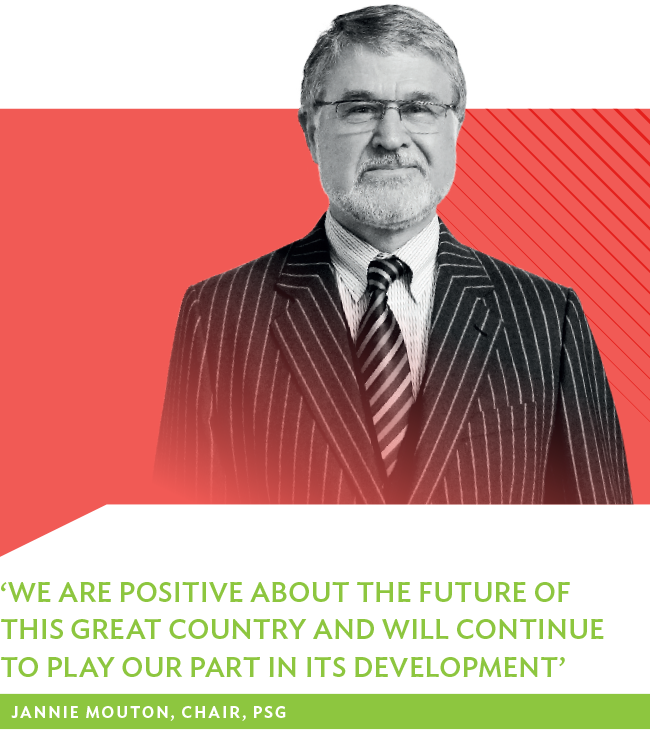 In its results to end-February, Gaia announced it has ‘a diversified pipeline of approximately R1.7 billion of exclusive investment opportunities for which it requires equity funding to execute’ and that the yields of this pipeline ‘are above target investment return of CPI +6% (gross of fees) on a blended basis’.

PSG chair Jannie Mouton offers sage advice, particularly against a backdrop of many locally based and listed companies diversifying offshore. Often questioned about international expansion – perhaps more so in recent years ‘given the current economic, political and corporate climate in South Africa’ – Mouton maintains in its 2018 annual report that ‘PSG Group has significant competitive advantages here in South Africa’. He explains that as ‘born-and-bred South Africans’, the group understands ‘the fundamentals of the country from a political, economic and cultural perspective’. In addition, it can draw on its ‘well-established professional relationships with key role players, including financial institutions, regulators and the like’.

Cementing the group’s place in SA, Mouton adds that PSG is ‘a large player in a South African context, but relatively small in international terms’. Furthermore, it has ‘a good reputation in South Africa and is well respected’.

According to him, many investment companies ‘have expressed how difficult they find investments abroad – not being country/sector experts and not having reliable contacts in those countries. They are also not able to effectively assist management in those countries should the need arise since they are simply too far removed from the action’.

Mouton is upbeat about the future. ‘These are exciting times for PSG Group – we have a diversified and well-established core investment portfolio together with early-stage investments in selected growth sectors, all with promising growth prospects. As always, we will continue to look for “the next big thing”,’ he says.

‘Regardless of the economic and political environment, we as PSG Group are proudly South African – we are positive about the future of this great country and will continue to play our part in its development.’