The industrial engineering sector on the JSE might find itself in a flagging manufacturing environment but it has all the intrigue of the biggest corporate sectors. The industry includes companies that supply and manufacture machines for SA’s factories and mines.

Largest, both in terms of market cap and current fascination, is ball bearing and agricultural implement supplier Invicta Holdings. Its biggest shareholder is SA’s unrivalled dealmaker of the last 10 years, Christo Wiese. While Wiese has made his fortune on consumer goods (think Shoprite and Steinhoff International) – buying companies with strong cash flows to fund more acquisitions – he has yet to match this success in his ventures outside of retail.

In November 2016, Invicta issued a cautionary saying it was involved in discussions that may lead to corporate action. Invicta has not given further details about the potential transaction, leading to speculation.

It is well-known that Wiese sees opportunity in Africa (including SA) as well as in Europe. Unlike the luxury goods-owning Rupert family, Wiese has a firm and oft-repeated belief in far more basic goods. Apart from that he sees value in no-frills products, he has also previously stated an intention to consolidate his consumer business interests.

Marc Hasenfuss got it from the horse’s mouth in a Financial Mail report on Invicta: ‘Probably the most intriguing moment at the AGM was the surprisingly frank response to a question from small-cap expert Anthony Clark on further consolidation of Wiese’s industrial interests. Clark raised the matter in the context of a recent investment presentation by Stellar Capital Partners (SCP), an investment company where Wiese has some influence. SCP holds a majority stake in industrial supplies group Torre, and there have been whisperings in the market that Wiese may reverse his stake in Invicta into SCP or initiate a tie-up with Torre.

‘On rearrangement possibilities, Wiese said: “It is a work in progress. I would like things as neatly packaged and boxed as I can… A number of deals are being discussed”.’

Adding further spice to the speculation about Invicta was the sudden resignation of CEO Charles Walters. The fact that Walters will stay on in a consulting role for a bit suggests the move wasn’t acrimonious but the news that former long-standing CEO Arnold Goldstone will re-assume his position also suggests the change wasn’t planned. So why doesn’t Wiese simply do the ‘tidying up’? It’s not as if he can’t afford it. History suggests Wiese will only do it if the terms of the deal are right, not least of which is price.

Invicta described its operational performance in the half-year to September 2016 as ‘outstanding’ in a ‘challenging’ market. That adjective – along with ‘tough’ – is now one of the most used in company results presentations. Indeed the Invicta explainer indicates that the term ‘challenging’ is a euphemism. ‘South Africa, which accounts for 78% of group revenue, experienced poor GDP growth with volatile exchange rates, political uncertainty, drought, falling demand for earthmoving machinery and subdued demand for commodities,’ Invicta stated.

The ‘outstanding’ was cash flow – another Wiese hallmark – which improved, as well as the expansion of the operating margin. However, a once-off profit from a disposal in the previous period resulted in total comprehensive income nearly halving to R169 million. Revenue was up 8% to R5.75 billion.

Potential investors in Invicta will have to decide if the group can continue to perform better than peers in a difficult market. An additional call they need to make is whether Wiese can translate his track record in retail to industrial machinery. And more than that, does he have the time?

At a corporate-governance level, potential shareholders will also have to determine if the group has reformed. This after the JSE publicly censured Invicta when it failed to obtain shareholder approval for Walters and Goldstone to sell more than a million shares to an Invicta subsidiary. 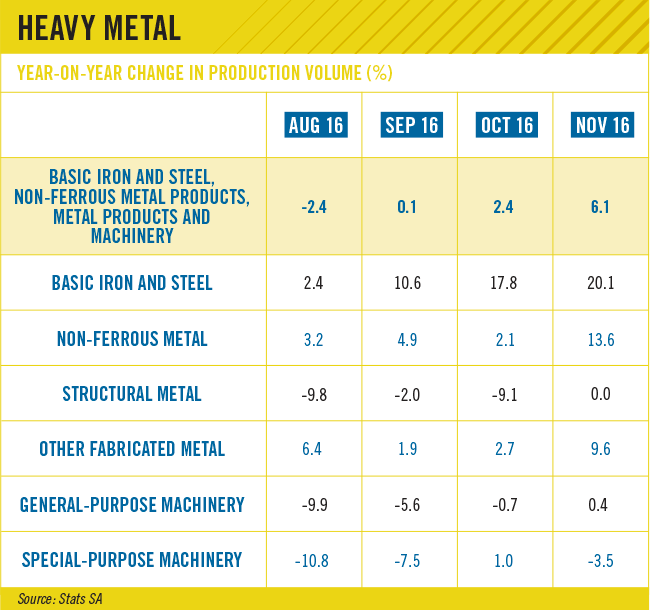 The conflict of interest was that Walters and Goldstone were in a position to be on both sides of the trade: sellers and buyers.

Another curiosity is Howden Africa, controlled by Colfax of the US. Howden, which makes cooling fans for factories, has oddly stopped paying a dividend despite having no need to conserve cash. At the end of June 2016, cash stood at R764 million, more than a third of its market cap.

Indeed, Howden paid net finance costs of a mere R61 000 in the first-half to June 2016. Theories for the safeguarding tactic include that Howden is building a war chest to make a big acquisition, or that parent Colfax is planning to buy out minority shareholders. In theory, suspending the dividend has the effect of suppressing the share price.

Howden has not been specific on the reasons, telling shareholders only that ‘the board is actively investigating options to utilise the cash’, as reported by the Financial Mail.

Declining profit at Howden continued into a third year when the company reported total comprehensive income down 3.4% to R91 million to June 2016.

Potentially more exciting is the new fabrication technology division, which managed to garner R35 million in sales. Losses at this Howden startup were small at R2 million.

While there is speculation about potential corporate activity at Invicta and Howden, the enX Group has already completed the industrial engineering sector’s biggest acquisition of 2016, valued at R7.8 billion.

In a daring deal, enX bought the industrial equipment as well as fleet management and logistics businesses of debt-riddled Eqstra.

The company raised R1.5 billion in equity to inject into Eqstra’s remaining mining business, in which enX now has a 20% stake. Eqstra’s debt at the end of 2015 was R7.55 billion – more than eight times its market cap, according to Bloomberg. The transaction adds Eqstra’s industrial businesses to enX’s existing industrial units in power generation, wood machinery and petrochemical supply. 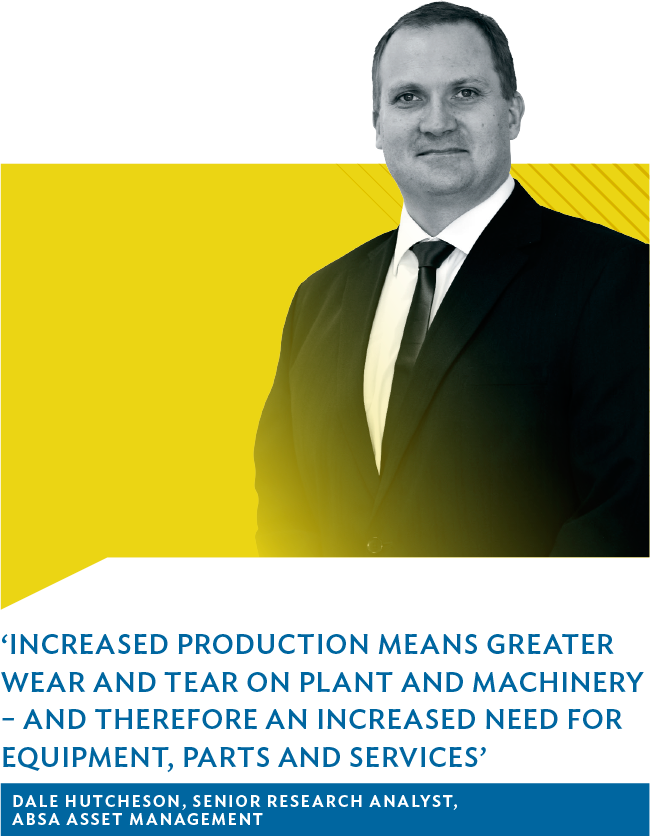 The purchase, a share swap with Eqstra, improves both product and geographic diversity for enX, the buyer says. Like a motor dealership with a workshop, the deal is also in line with enX’s model of adding regular income to cyclical machinery sales.

‘A key component of enX’s business model is its offering of ongoing servicing and customer support, thereby adding value to the products sold through its partnerships with predominate global OEMs [original equipment manufacturers],’ enX said in its year to August 2016 results commentary.

The benefit for Eqstra of the complex deal is that it received a desperately needed recapitalisation. The downside for enX is that it will take on as much as R5.2 billion of Eqstra’s debt. enX says it has significant support from lenders to get through two difficult years (financial 2017 and 2018) of repaying loans and interest.

Countrywide, the broader factory sector continued to decline since most of the industrial engineering enterprises published results, according to Stats SA.

Master Drilling Group – which as the name suggests provides drilling services for miners and builders – has also been expanding in the Americas and Africa to reduce reliance on SA.
This included the purchase of Bergteamet Latin America SpA’s Chile unit and winning its first contract for blind shaft boring in the US.

Despite subdued commodity exploration, Master Drilling said ‘strong margins were maintained during these difficult times’, referring to the six months to June 2016. Profit for the year before ‘comprehensive’ items was only marginally down to $10 million despite a significant fall in revenue. However, utilisation of its drills increased in the second quarter of the same six month period, and Master Drilling expected profits to rise during the half-year to December 2016. 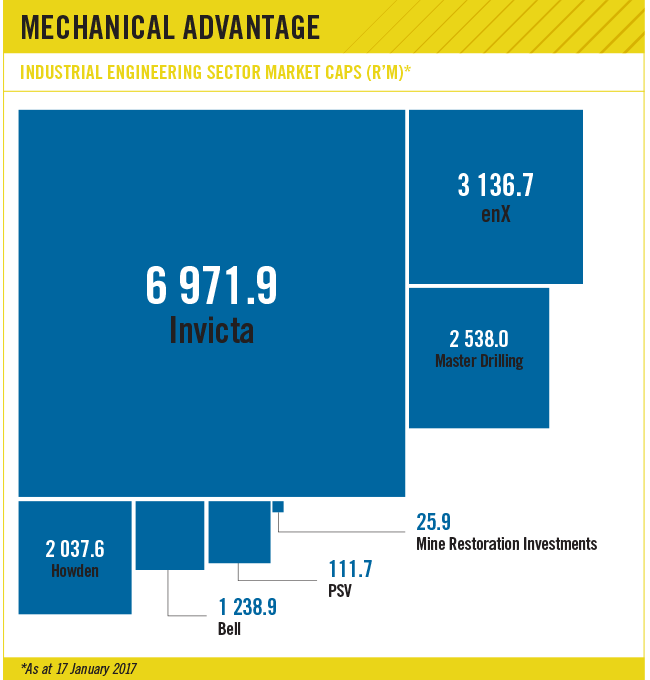 Bell Equipment, one of SA’s few original machinery makers, is probably the best-known company in the industrial engineering sector. However, the market cap of the group, which remains profitable, has fallen to around R1 billion from just under R3 billion in 2013. Its share price declined after the commodity bust took a heavy toll on mining equipment sales. Still, not all are expecting the doom and gloom to persist.

Fund manager Allan Gray has taken a calculated bet that Bell is a bargain as the mining sector starts to show signs of revival. Bell disclosed that Allan Gray had a stake of more than 5% in November 2016. No doubt Allan Gray would also have taken a view that Bell, in part because it trades at a big discount to its book value, offers enough capital protection for clients should a poor scenario play out.

Meanwhile, PSV Holdings – which supplies valves and makes cryogenic freezers for factories – has struggled to make any profits for most of the last five years. In the six months to August 2016, PSV managed to reduce its total comprehensive loss to R461 000 from R9 million a year earlier.

Faring worse than PSV is Mine Restoration Investments (MRI), which has voluntarily suspended trading its shares on the JSE.

Wiese also holds a stake in MRI through Stellar Capital, which was in talks to sell its stake to an investor that would have also injected capital into MRI. However, the negotiations failed, leaving MRI with one less option for revival.

While in general, manufacturers (the customers of the industrial engineering sector) continue to grind lower, volatility and corporate activity will likely offer investment opportunities for professional fund managers and entrepreneurial traders. Industrial customers connected to the mining sector, which may have already hit rock bottom, could offer engineering companies the first uptick.

Dale Hutcheson, a senior research analyst at Absa Asset Management, notes that industrial engineering companies linked to miners ‘should be seeing signs of an improved operating environment from a year ago’. This, he says, is the result of higher commodity prices, which is encouraging increased production from existing operations.

‘The increased production means there is greater wear and tear on plant and machinery – and therefore an increased need for equipment, parts and services,’ says Hutcheson.

He contends that another factor that will drive demand for equipment, parts and services is the return to normal investment levels in mining, given unsustainably low capital expenditure as companies went into cash preservation mode in recent years.

However, Hutcheson cautions that ‘not all these companies will be seeing the full benefit of this apparent cyclical recovery as the mining sector in South Africa waits for regulatory certainty before committing to new projects’. He adds that deciding if industrial engineering stocks ‘have legs’ is dependent on commodity prices continuing at or above current levels.

‘Also worth noting is that the mining sector recovery we have seen was driven by price performance of the bulk commodities, while a commodity like platinum still needs to be at higher levels to encourage investment.’