According to McKinsey, SMEs represent more than 98% of SA’s businesses, employ between 50% and 60% of the country’s workforce across all sectors, and are responsible for a quarter of job growth in the private sector. Despite their importance it’s suffice to say that SMEs have taken severe strain during the nearly two years of COVID. Cash flow – already a predicament for many SMEs – has become an even greater challenge in the wake of the pandemic. Some businesses have been able to see themselves through, others needed bridging finance or loan repayment relief, while an unfortunate number had to close their doors permanently.

Indeed, liquidity is a hurdle faced by small businesses globally, to the point where some countries, such as the UK and Australia, are implementing stricter protocols governing payment terms, making it mandatory for the big guys to promptly settle the little guys’ invoices.

Recent Sage research reveals that 48% of SA executives surveyed face challenges in managing costs and cash flow, and that 45% face difficulties in forecasting demand and revenue due to uncertainty. ‘Cash flow is one of the most important measures of a business’ health, since an organisation can record significant sales yet run out of cash because it needs to pay expenses before its customers pay up,’ says Viresh Harduth, VP of small business at Sage Africa and Middle East.

At any given time, more than nine out of 10 SA SMEs are owed money outside of agreed payment terms, according to Xero’s 2019 State of Late Payments report. ‘Late payments cost the equivalent of 89.5 working hours annually for the average small business – the equivalent of two working weeks,’ according to Xero South Africa country manager Colin Timmis. ‘This reflects the depth of the late payments problem – even before the chronic uncertainty that COVID-19 brought.’ Timmis says late payments are ‘a crisis in South Africa’, adding that ‘before the pandemic, in 2019, our research found that the two chief concerns for South African SMEs were cash flow and late payments – 91% of owners reported late payments that year. Our latest research found that mistakes with cash flow were among the four most expensive missteps made by 41% of businesses in the last year’. 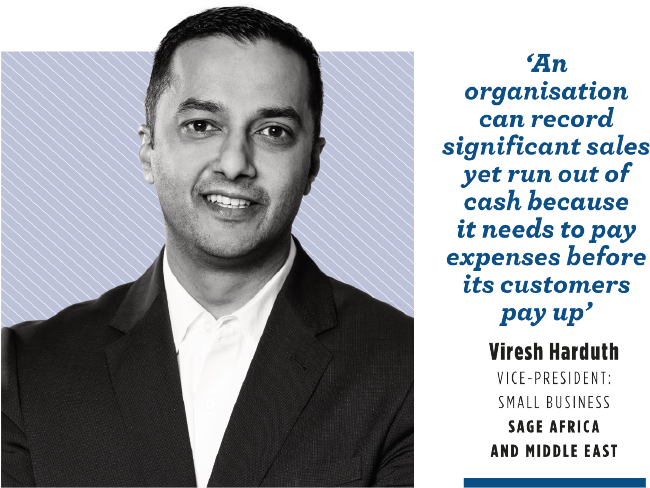 In SA, the National Small Business Chamber (NSBC), established in 2007, has been championing the issue of prompt payment for years, says founder and CEO Mike Anderson. The NSBC, the largest organisation of its kind in Africa, with a current base of more than 141 000 SMEs, launched the Prompt Payment Code several years ago, the beneficiary of which is the SME sector. The code encourages and promotes best practice between the government and larger organisations and the SME suppliers to which they make payments.

Anderson says this is, and will continue to be, a major initiative for the chamber. ‘The NSBC is on a massive drive to educate big companies and government on the damage late payments are causing and why it is so important to pay their SME suppliers on time – within 30 days. ‘Late payment by big business and government is a big problem that continues to get worse,’ he adds, and this has unfortunately escalated during the pandemic.

‘What we’ve seen in the market is that SMEs are experiencing a huge amount of pressure from all directions. One of those directions is their late-paying clients,’ says Daniel Goldberg, CEO and co-founder of Bridgement, a fintech company that specialises in assisting small businesses with funding. ‘Especially in the corporate space, there’s this power disparity, where you find the corporate dictates what the payment terms will be and it’s for the SME just to accept. The SME has no say in those payment terms.’

The power disparity does not give SMEs much leeway, especially when it comes to negotiating better payment terms, according to Goldberg. Sometimes, even this comes with a caveat – such as giving a 5% discount to clients who settle invoices within seven days. ‘It’s a difficult balance,’ he says. ‘Often times we see businesses get awarded a contract but turn it down because the payment terms make it impossible to deliver the goods or services.’

According to Goldberg, since Bridgement was established in 2016, it has seen massive growth and met a very dire need. The products it offers include business loans, revolving credit loans and invoice finance, which allows an SME to receive an instant advance, using their invoices as security. ‘The credit gap for SMEs in South Africa is estimated at between R80 billion and R340 billion,’ he says. ‘SMEs are unable to access the credit they need. Pre-COVID-19 it was difficult but it’s much worse now. Credit has dried up.’

Goldberg believes the government has a critical role to play in creating friendlier regulations to make it easier for businesses to get up and running and trade. There’s much to be learnt from countries that have created start-up- and SME-friendly laws, he says, whether it’s tax credits, grants or incentives. ‘We have some of these things already but there’s a lot of room for improvement. Also, corporate South Africa needs to step up.’ He says that while there are some great initiatives to encourage prompt payment to SMEs, the impact of this has not yet been seen widely enough in the market. ‘The thinking is right but I do wonder if corporate South Africa will self-enforce this.’ 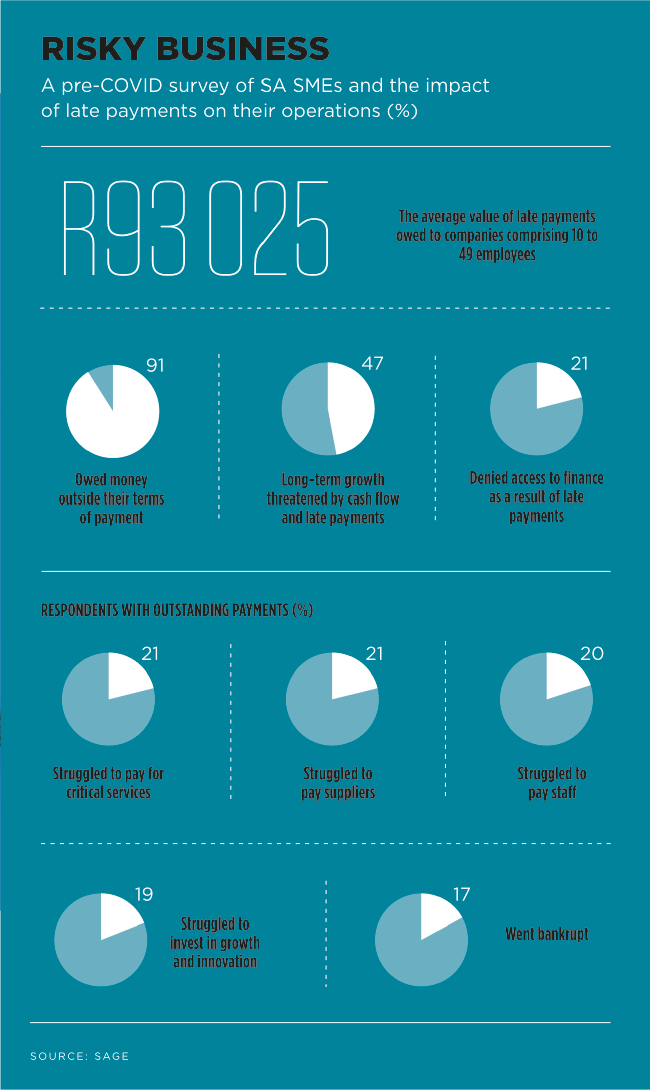 According to the Small Business Institute (SBI), a chamber and business forum organisation and a member of Business Unity South Africa (BUSA), small companies write off as much as 40% of late payments as bad debt and receive payments, on average, 101 days after the 30-day target. John Dludlu, CEO of the SBI, says late payments are ‘a silent killer of thousands of small businesses in South Africa and around the world’.

For the past four years, one of the SBI’s primary campaigns has been focused on the issue of late payments to SMEs. ‘Fortunately, in November 2020, over 50 major corporations in South Africa publicly committed to paying small businesses within 30 days,’ says Dludlu. ‘Unfortunately, this campaign wasn’t joined by the state and state-owned enterprises.’ The problem, however, is receiving attention, he adds. ‘National Treasury, for example, now regularly reports on this issue.’

The initiative to which Dludlu is referring is #PayIn30, and was launched in November 2020 by Business for South Africa (B4SA), the SA SME Fund, and Business Leadership South Africa (BLSA), while being supported by BUSA, the SBI and the Black Business Council, among others. It saw more than 50 of SA’s largest companies formally pledging to pay their SME suppliers within 30 days.

According to Busisiwe Mavuso, CEO of the BLSA, the initiative aims to institutionalise a culture of early payments to SMEs. She says they expect the number of big companies making the commitment to pay SMEs more timeously to increase in time. ‘I’m proud that our members recognise that we’re all in this together, and as corporate leaders, we need to do our part to help our economy grow.’

Discovery Group CEO and chairperson of the SA SME Fund Adrian Gore says that paying their suppliers early is a ‘demonstration of a shared value approach to business’. At the launch of the initiative, he said that ‘as a society, we need to start implementing bold actions to grow our economy and preserve and create jobs. ‘I believe entrepreneurs are a powerful force and an integral part of this rebuilding. We need to support them’. He then called on fellow CEOs to join forces in what he called a ‘significant initiative’. Among the companies making the pledge were Sasol, Massmart, Allan Gray, Aspen Pharmacare, AngloGold Ashanti, Gold Fields, BP Southern Africa, FNB, Liberty Holdings, OUTsurance, Remgro, Sanlam and the JSE. 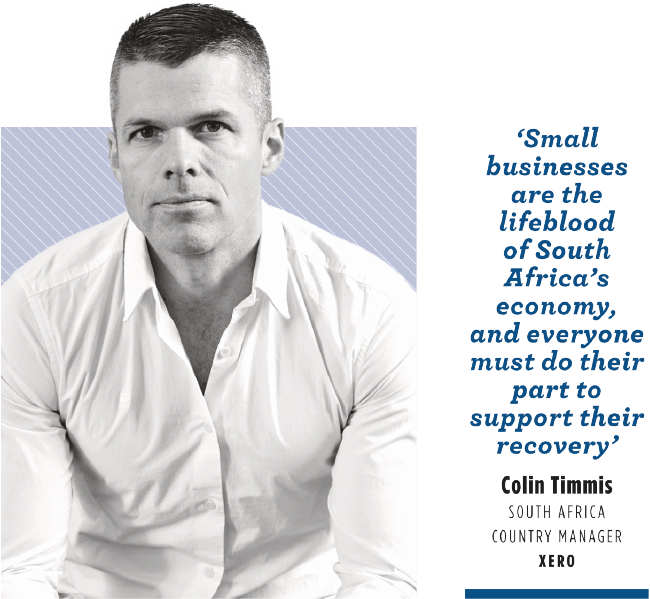 Xero’s Timmis believes that while the government’s stimulus package and various relief funds and other debt-relief measures are helping, SMEs are likely to continue to struggle with cash flow for the foreseeable future. ‘Small businesses are the lifeblood of South Africa’s economy, and everyone – including individuals, the business community and the government – must do their part to support their recovery,’ he says.

This is the spirit behind Xero’s recent Time to Rebuild manifesto, he adds, which lists nine recommendations, including building a more collaborative SME community, boosting digital adoption and tech skills, and improving late-payment practices. ‘This period should be a time of reflection about what sort of world we want to emerge into, post-pandemic,’ says Timmis. ‘South Africa’s commerce and institutions have played critical roles in supporting the country and its people during the emergency and in the years preceding it. Now, both are the key agents in driving the country to enduring success.’

Despite their struggles, the country’s SMEs – with the inclusion of micro-enterprises – remain optimistic. According to the Mastercard SME Index, which surveyed 300 SMEs in SA between April and mid-May 2021, six in 10 business owners say they are proactively planning for and anticipating growth in the next year. While the majority of SMEs (84%) say the pandemic has negatively impacted their revenue, 79% project that their earnings will either hold steady or grow in the next year.

Mastercard has pledged $250 million and committed to connecting 50 million SMEs globally to the digital economy by 2025. For many small businesses, reducing their dependence on cash through digital payment acceptance has played a major role in being able to get paid and maintain revenues. Suzanne Morel, Mastercard South Africa country manager, says SMMEs in SA continue to demonstrate strength and agility, despite the lockdowns, changing consumer habits, and restricted supply chains that have resulted from the pandemic. ‘While several challenges remain, it is encouraging to see how SMMEs are transforming the way they do business to benefit from the secure technology and convenient payments solutions that are currently shaping commerce,’ she says.

Timmis notes that a ‘concerted, collective campaign’ to tackle SA’s late-payments culture is needed, adding that technology has a huge part to play in getting payments to businesses on time. COVID-19 has made businesses of all sizes, across all sectors, re-evaluate their relationship with technology. ‘This will have to be an ongoing discipline in the future, to stay relevant in a hyper-competitive new normal. Ultimately, SMEs that take full advantage of support, always keep one eye on the road ahead, and choose technology options wisely will have an advantage over the competition.’