It’s the science of renewal – taking a novel idea that satisfies a need (which often the consumer didn’t even know existed) and bringing it to market. It means seeing what everybody else has seen but thinking what nobody else has thought. This can be something radically experimental or simply combining two things that already exist and creating something ingenious. It’s innovation.

SA used to excel at this. Previously, homegrown inventions in mining, military, medicine and beyond had transformed into household names or global firsts such as the CT scanner, the first heart transplant at Groote Schuur Hospital, Sasol’s coal-to-liquid patent, the dolos interlocking concrete wave buffer, the Kreepy Krauly pool cleaner and armoured vehicles capable of withstanding landmine blasts.

However, the young democracy prioritised basic challenges such as service delivery, infrastructure, education and job creation before turning its attention – through the Department of Science and Technology (DST) – back to the national innovation system. ‘As South Africans we often pride ourselves on a pioneering spirit,’ says Morné Mostert, director of the Institute for Futures Research at the University of Stellenbosch. ‘South Africa does well in certain industries such as financial services and mobile technology. At the moment, there is a greater need for innovation than ever before.’

Superstar innovators such as SA-born Elon Musk and Mark Shuttleworth are dynamos that stimulate and drive national economic performance. Some economists consider innovative activity to be the single most important force in achieving long-term economic growth. ‘Innovation is a predictive indicator of success. Renewal is a sign that ideas are frequently revisited and updated,’ says Mostert.

‘Innovation means that the country becomes more globally competitive. It also demonstrates an investment and belief in the value of people and ideas. In turn, this attracts more innovative people and businesses to the country. This potentially virtuous cycle generates a spirit of innovation, which is also essential for the development of an entrepreneurial culture. Innovation is a sign of investment in the future. Businesses want to invest in future-oriented economies,’ he says.

While business operations focus on today’s revenue, it’s innovation that creates tomorrow’s revenue, says Awie Vlok, lecturer in innovation management at the University of Stellenbosch Business School and also a former director of the CSIR’s Innovation Leadership and Learning Academy.

The prominent Global Innovation Index, developed by Cornell University, INSEAD Business School and the World Intellectual Property Organisation, rates SA 54th out of 128 countries in 2016 (compared to 60th out of 141 in 2015). Yet the country’s innovation efficiency ratio has dropped from 94th out of 141 countries in 2015 to 99th out of 128 in 2016.  Vlok says: ‘This indicates a relative overall improvement in innovation but a reduced ability to convert innovation inputs into outputs, such as knowledge and technology impact and diffusion as well as creative outputs in the form of new goods and services and intangible assets.’ 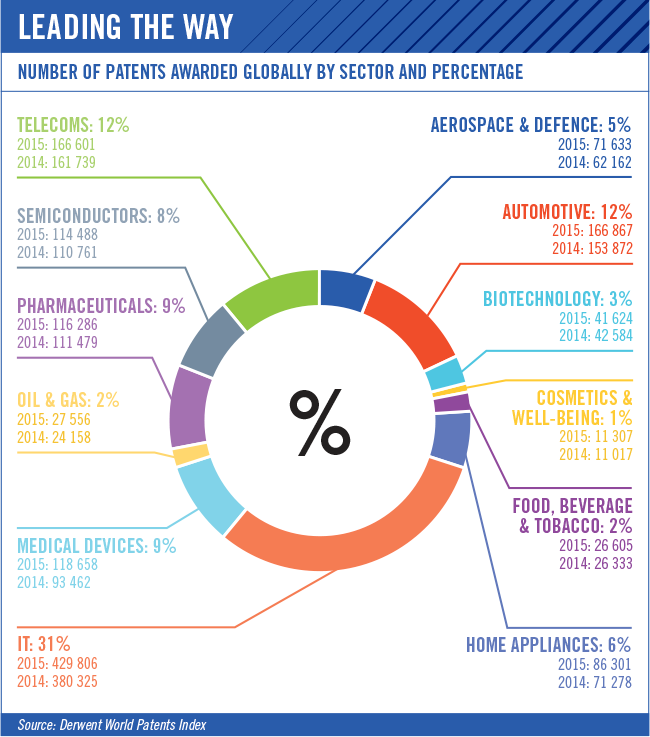 One reason for this is insufficient investment. Science and Technology Minister Naledi Pandor warned in her budget speech that her departmental budget for 2016/17 had remained the same as the previous year (R7.4 billion) and that SA was not investing enough in science, technology and innovation. ‘If we do not change this trend we will be overtaken by nations that have less capacity and knowledge resources than we have. Our failure to address the funding of this sector is causing us to neglect several sectors that could offer South Africa talent, new products and real contributions to growth,’ said Pandor.

The DST’s 10-year innovation plan focuses on hydrogen fuel cells, minerals beneficiation, additive manufacturing, nanotechnology and the bio-economy – growth areas in which it wants to form partnerships with corporates. Government offers companies of all sizes substantial tax incentives for R&D and provides financial support for tech entrepreneurs through the Support Programme for Industrial Innovation and the Technology Innovation Agency, which seems to be back on track under the leadership of its new CEO, Barlow Manilal.

Meanwhile the Department of Trade and Industry’s Technology for Human Resources Programme strengthens public-private linkages between industry and universities. In 2014/15 it supported 296 projects and 1 548 researchers while producing 45 patents, 294 products and prototypes and 1 311 publications. According to Pandor, there’s still need for a venture capital fund for high-technology SMMEs and start-ups. Overall, the national R&D intensity translates to 0.73% of GDP, which is less than fellow BRICS members China (2.01%), Brazil (1.15%) and Russia (1.13%).

‘South Africa’s 2018 target for R&D investment was 2% of GDP, which is unlikely to be achieved in light of current economic conditions and priorities,’ says Vlok. The NDP has since reduced this target to 1.5% of GDP by 2019, which is still extremely ambitious.

An article in the SA Journal of Science also cited this concern: ‘The decline in business funding for R&D would be even more severe if one were to exclude Sasol, whose funding for R&D rose from R376 million in 2002/2003 to R1.26 billion in 2012 and by 2012 constituted 12% of business expenditure for R&D [BERD] in South Africa.’

The article further states: ‘In particular, the levels of specialisation, state-industry embeddedness and effective incentivisation of BERD must all be increased if South Africa is to overcome its present growth constraints and develop a competitive high-technology sector.’

In addition to plugging gaps in funding, the country needs integration of the innovation system, accelerated skills development in the growth areas, and to focus major campaigns on ensuring that innovation drives progress in the growth sectors, according to McLean Sibanda, CEO of the Innovation Hub, which is a subsidiary of the Gauteng Growth and Development Agency.

Growth areas with the most innovation potential include biosciences (largely health, industrial, agroprocessing), manufacturing (with a focus on electronics) and the services sector (significantly influenced by ICTs with integration of gaming, animation and virtual reality), says Sibanda.

‘Biosciences is reliant on technology and South Africa has been building its capacity and capabilities in this sector. The significant contribution of subsectors such as pharmaceuticals to balance off trade payments coupled with significant demand for health and food security has already increased the activities in this sector, with potential for pharmaceuticals, industrials and agro-processing to contribute significantly to exports into the rest of Africa.

‘The services sector continues to dominate the economy and will increasingly play a role in terms of exports as South Africa starts to assist the rest of the continent in its industrialisation and general systems development, whether it be public sector capacity development or financial services,’ he says. Sibanda explains that one way of driving innovation is to instil problem solving and entrepreneurship from a young age, starting in primary school. ‘The key is teaching how to solve problems but secondly that it’s okay to take a risk and fail.’

The message that failure is necessary lies at the core of all great innovation. An oft-used Elon Musk quote goes: ‘If things are not failing, you are not innovating enough.’ This sentiment is echoed by Brian Kropp, HR practice leader at best practice insight and technology company CEB.

‘The role of leaders in driving innovation is critical. After all, they set the tone about celebrating failure. If leaders hide mistakes, then learning doesn’t occur. If they learn from and share lessons learned from failure, they can build a more innovative culture. 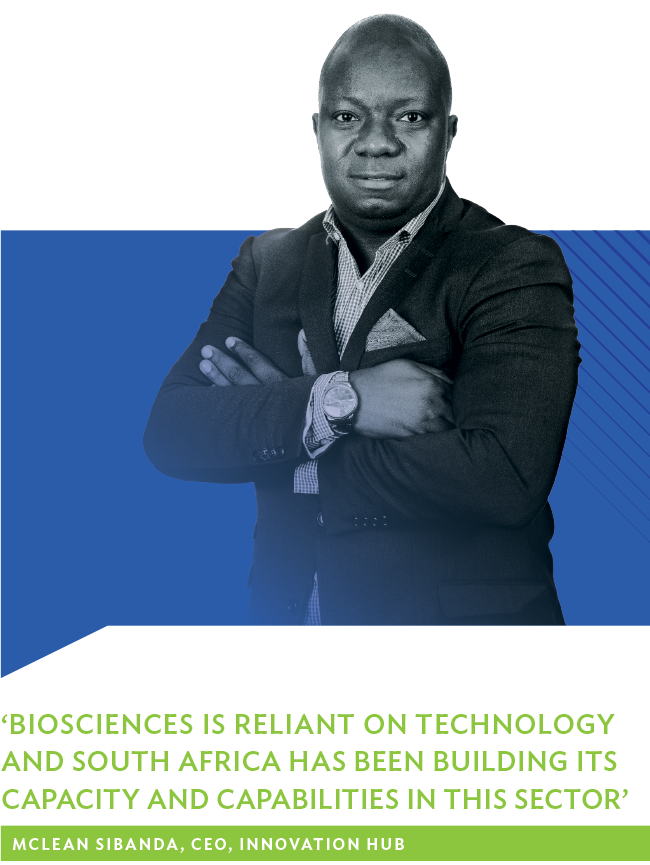 ‘To build innovation, companies in South Africa need to encourage appropriate risk taking, be able to celebrate rather than punish good ideas that didn’t work out, encourage collaboration by breaking down silos, and establish a platform to help people learn from mistakes,’ says Kropp.

In line with this rationale, Thomson Reuters’ 2016 State of Innovation report has coined the term ‘collabovation’ to describe the convergence of ‘collaboration, innovation, cultivation, cross-pollination and calibration’ that happens when strategic partners bring inventions to life. Collabovation happens between government agencies, science councils, universities and businesses as well as their customers and suppliers.

‘Innovation should never be limited to any specific area of your business – it must be driven as a culture and differentiator across the board,’ says Carel du Toit, CEO of Mint, a business solutions company. ‘We define innovation as anything that either is done differently or in a different way.’

Open-mindedness is vital in a world where disruption is rapidly changing the way business is conducted – through technology trends such as 3D printing, robotics, artificial intelligence and the internet of things, but also the sharing economy, in which Uber has disrupted the global taxi industry and AirBnB has turned the hospitality sector upside down.

SA companies and start-ups not wanting to be left behind should reflect on the theory that ‘any useful idea about the future should appear to be ridiculous’. After all, cars will be driverless, drones will deliver parcels, digitisation will create smart cities, and most children entering primary school today will grow up to work in professions that don’t yet exist.

As Jim Dator, US-based pioneer of futures studies put it, ‘if a statement said to be about the future makes sense to you, it’s probably about the present and therefore not very useful.

‘If it shocks or disgusts you, or seems ridiculous science fiction, it may be about the future, and hence useful to you’.

With this way of thinking – in addition to increased public and private collaboration, business R&D investment and skills development – SA must find its way back to innovative greatness.