It’s not every day you get to create and label your own gin, and of all the steps, the one that vexes most is naming the concoction. Dragon’s Breath was one, Virgin’s Cocktail another, Stand Back the most worrying. The gin-making course is care of Cape Saint Blaize Artisinal Distillery in Mossel Bay, a sophisticated business, if ever there was one, that combines restaurant, distillery, laboratory and bar. The historic Ochre Barn, in which it resides, has been beautifully renovated, the gin stills are gleaming copper, the furniture the latest in contemporary Minimalist chic. It’s entirely not what’s expected in the old-town area of Mossel Bay, which, let’s be honest, isn’t on many international jet-set lists. It should be.

Back at the stills. All has gone well. The instructor – part comedian, part chemist, part historian – talks his initiates through the simple process. Boil a bunch of chosen ingredients at high temperature and pressure in the still (including that lion’s tail, otherwise known as wild dagga), wait for the ethanol to filter through, chuck the first 10% out, bottle the rest. It must be more complicated than that, but it seemed entirely simple to the uninitiated.

Waiting for the bottling gurus to label your mother’s ruin, there’s time for a quick tour of the bespoke factory and to marvel at the beau-tifully designed ceramic bottle, have a meal at the restaurant and take in the view of the Mossel Bay harbour from the terrace. Time, too, to consider the nature of the Garden Route’s appeal. It remains all things to all people, Kodak moment, retreat, wildlife haven, beach holiday, touring challenge, hiker’s delight. Plettenberg Bay has traditionally been the nexus of most upmarket distractions: the new wineries, celebrated accommodation, top design and best service. Today that footprint has extended up and down the coast, most notably to George and the Victoria Bay area, which is now seeing serious growth. 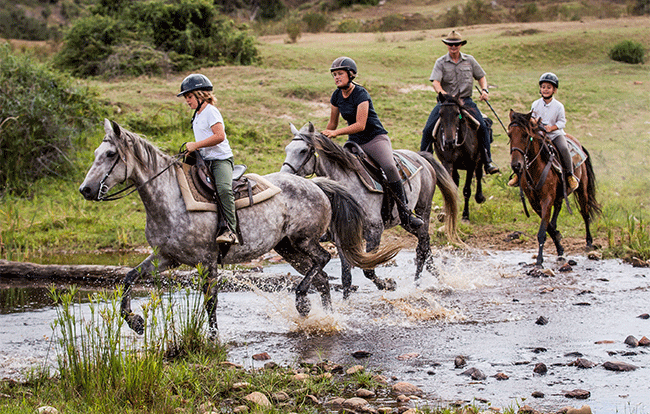 No place better represents the growing sophistication than Donegal Wines in Victoria Bay. It’s an audacious adventure to be sure: a pair of Joburgers cocking a snook at the established wine world by buying their grapes in one place (Basson Farm in the Swartland) and creating and selling the finished product far away in George. And Carl Ahlström and Ansua Steyn seem to know what they’re doing; their shiraz won a gold Veritas in its first year and the Vic Bay red is a thing of beauty. But if the wine is surprising, the ‘vineyard’ is a real showstopper. Designed as a traditional Meursault cave, the cellar and tasting room are a successful fusion of old and new, cleverly laid out so that the roof of the cave is the summer chill area, complete with outside bar and views of the surrounding forests. Chesterfields, Persian carpets and a plethora of pianos add interest (Ahlstrom is a classically trained pianist and Steyn a mezzo soprano). There’s a spooky, dark corridor between the tasting room and the cellar, which the theatrically inclined couple light with candles for events.

A good red deserves an occasion and there are few more celebratory experiences than a dawn trip above the coastal belt in a hot-air balloon. Champagne is actually the tipple of choice on board Nova Balloons’ George-based hot-air hurrah, a toast to: (a) having arisen at four in the morning to be at one of the various launch sites and (b) having conquered the fear of basket and nylon being the only thing between you and a towering Outeniqua peak.

The flight is, as organisers say, heavily weather dependent, meaning winds on the ground or at altitude nix any take-off. If the weather gods are kind, the trip lasts an hour, though the set-up and set-down take a fair time, so four hours is set aside for the outing. Launch sites are as far away as the Little Karoo, outside Oudtshoorn, or as close as George, again weather dependent. So, what’s it like? I can’t share that, as the much-discussed weather arrived in the form of upper-atmosphere eddies that would have taken us halfway to Morocco. But it doesn’t take much imagination to conjure up unforgettable vistas of mountains, sea, coastal wildlife (including whales, if you’re really lucky) and a bird’s eye view of more golf courses than Scotland. It’s a bucket-lister, no question, as thrilling as jumping off a bridge with a piece of elastic attached to your leg, but without the accompanying long-term ligament issues. 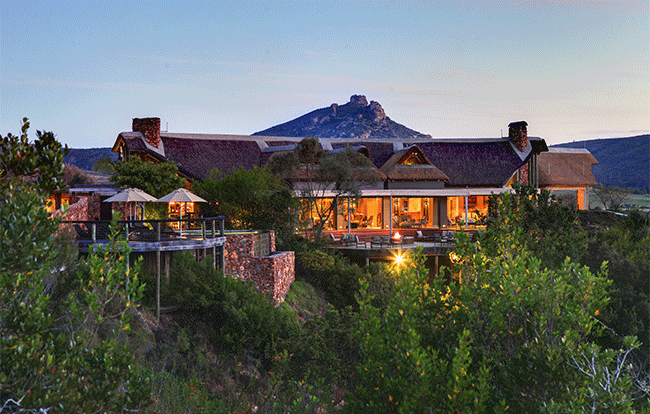 Speaking of golf courses, Henry White’s legacy at Fancourt has had a refresh. Or rather his original homestead, the Manor House, has been refurbished. White (after whom the local neighbourhood of Blanco is named) was a consultant engineer on the Montagu Pass project and installed his family in the grand house in 1859. Built in the style of an old Cotswold mansion, the property, set in its own tropical garden on the larger Fancourt Estate, was only opened to the public as a hotel in 2011 and, with just 18 suites in total, all individually decorated, is a rare Garden Route privilege.

The Jo Pieters Design Studio refurbishment has covered the bedrooms and suites, the fine-dining restaurant Henry White’s and the guest lounge and study. Gone are the monotones and slightly oppressive greyscale of the original approach, replaced by a more cheerful amalgam of colour and pattern, more befitting of a sunny Garden Route destination. Best of all, the unused garden pavilion has been transformed into an open-air gazebo, good for summer breakfasts and intimate dinners.

Fancourt itself remains a much-loved food and spa destination. And golf, of course. Named Africa’s Best Golf Hotel at the 2020 World Golf Awards, it offers the dual delights of the Links, SA’s top-rated course, and the spa, which has proved a godsend in COVID times, a haven from a mad world. The Roman bath is a particular drawcard – large, tranquil, warm and restorative.

Wilder exploits tempt further afield. The exclusive Botlierskop Private Nature Reserve, in the hills above Kleinbrak river, manages to stay off the radar but is no less exceptional for that. So close to Mossel Bay, the 4 200 ha reserve is popular for excursions to see the Big Five. A well-regarded spa, the stilted Fireplace restaurant over a dam, and various accommodation options – including its own historic Manor House – recommend it, but it’s the activities that set Botlierskop apart. Cross the ancient landscape by Land Rover, on foot or on horseback; safaris happen twice a day, there are fynbos excursions on horseback or, for experienced riders, the chance to join the outriders and go game viewing by horseback. There’s also the chance to join a veterinary safari and be part of the reserve’s elephant- and lion-darting programme. 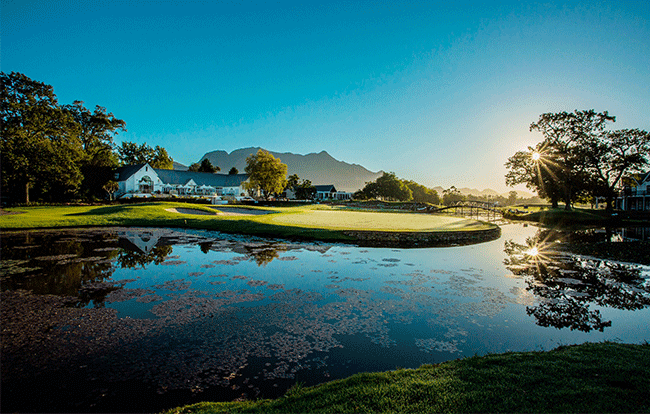 Back in the peri-urban George region, two unexpected gems underline the region’s sense of reawakening, post-COVID. The first is Redberry Farm, near George airport, a celebration of all things strawberry. If that sounds a little twee, think again. It’s a substantial business, not just a place to pick your own strawberries, year-round. Explore the largest permanent hedge maze in the southern hemisphere, eat in the tea garden and restaurant, buy a vast range of products at the farm stall, ride the miniature train or the horses, or take to the water on bumper boats or bubble balls.

There’s more – foodies flock there for Framboos’ hand-crafted ice cream, the Noshery’s wood-fired pizza and Houtbosch’s local wines and craft beer. Most of all though it’s an ideal place to people watch; locals from all walks of life flock to Redberry at weekends, giving it the feel of a medieval market, ale, kids, laughter and fun had by all.

No less intriguing is Maurits Lammers Antiques, on the way to Victoria Bay. Something of a legend in the antiques market in SA, Maurits converted a long barn into what is unquestionably one of the country’s most compelling shopping experiences. It’s said that if you can’t find it in Maurits’ place, it doesn’t exist. Furniture, crockery, silver, big, small, cheap, expensive… It’s all there, a treasure trove of the arcane and the unexpected.

A week is certainly not long enough to experience even a tiny part of what the Garden Route has to offer. The wider route is growing all the time; over time the moniker has come to include parts of the Little Karoo, much of the Overberg and the Baviaanskloof in the east. But the powerhouse centres of George, Knysna, Plettenberg Bay and Mossel Bay still have plenty of pull, benefiting from the creative energy of new arrivals.

It’s this dynamism that ensures the ever-evolving nature of the Route, good for first timers and returnees both. Go, and keep going back. It’ll have developed substantially since your last visit.