When the world’s quietest airliner touched down in Addis Ababa in August, it brought with it the hope that tourism would do for the East African country what it had for Vietnam and Cambodia. The newly minted Airbus A350, the first to be delivered to an African airline, represented a fresh approach for Ethiopia – make getting to the East African country easy and cheap, then seduce them with a combination of history and natural beauty to keep them coming back.

It may just work. Ethiopian Airlines is currently the cheapest way of getting to Europe from SA and word has gotten out that it is indeed a very splendid place, not just an obligatory stopover.

That is a gross understatement – Ethiopia’s treasures are many and varied. In 2015, it was voted the world’s best tourism destination by the European Council on Tourism and Trade, ostensibly for its combination of cultural and natural abundance. Not only is it the source of the Blue Nile, high up in the Mountains of the Moon, but Ethiopia also has nine Unesco World Heritage sites and is the birthplace of African Christianity, caretaker of the Ark of the Covenant (some say) and home to a collection of below-ground level monolithic 12th century churches carved out of volcanic rock.

What’s more, the country boasts the Ethiopian highlands – the most dramatic aspect of the Great Rift Valley – and, in stark contrast to those recondite mountains and valleys, the Danakil Depression, one of the lowest points on Earth, known for its 55°C heat, lava lakes and the salt deposits mined by some of the hardiest people on the planet. 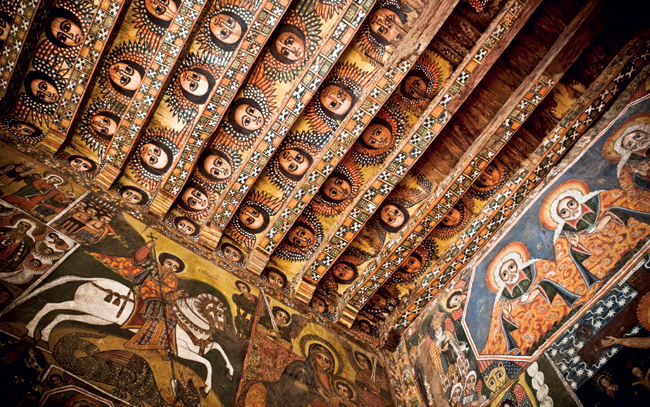 The gateway to Ethiopia is Addis Ababa, shortened to Addis by almost everyone. Politics is Addis’ stock-in-trade, home as it is to the AU and previously, the OAU. It’s a bustling, typically contradictory African city, a highland home to around 4 million people, an amalgam of colonial and traditional history. The telltale signs of the long Italian occupation, the Islamic invasion before that and the Coptic Orthodox Church that defined Abyssinia for centuries are all there. So too are the consequences of the disastrous communist Derg regime of the 1970s and 80s under Mengistu Haile Mariam – Ethiopia was brought to its knees by civil war and famine under his dictatorship and bears the scars today in the slums and obvious sprawl of unequal wealth.

Post-1991 and the coalition government, however, growth has been strong. Addis has gained a 21st century rail system, new infrastructure and a reputation for easy expat living, awash in AU money. It’s the veritable Brussels of Africa and gateway to the high, temperate north.

Ethiopia’s title as the Roof of Africa derives from the fact that half the country sits atop one of the world’s greatest highland biomes. The triangular-shaped upland is caught between two massive escarpments that drop precipitously to the lowlands below. The highlands are bisected by the Great Rift Valley as well as myriad other river systems, offering some of the most extraordinary landscapes on the planet – tributaries regularly fall off the escarpment down rock faces thousands of metres deep.

As novelist H. Rider Haggard famously suggested, ‘you do not know African splendour until you have seen the Ethiopian highlands’. Dishonest perhaps, given that there is no record of the 19th century schlock writer ever having visited the country, yet hardly hyperbole.

Central to the highlands appeal is the Simien Mountains National Park, a 220 km2 reserve in the middle of what is colloquially called the Historical Northern Route, a popular tour that takes in Gondar, Lalibela and Aksum. Simien offers a microcosm of all that the highlands have to offer, especially the spectacle of giant cliffs thousands of metres high. The observation lookouts at Gidir Got and lmet Gogo are ideal vantage points from which to take in the weird, other-worldly landscape. It’s in the Simien Park too that the famed bleeding-heart monkey – or gelada baboon – is found, its hourglass-shaped red chest patch a beacon to other geladas. The Ethiopian wolf (also known as the Simien fox) also calls the Simiens home, along with the walia ibex, though they’re far rarer and stick to the impossibly sheer cliffs of the escarpment edge. 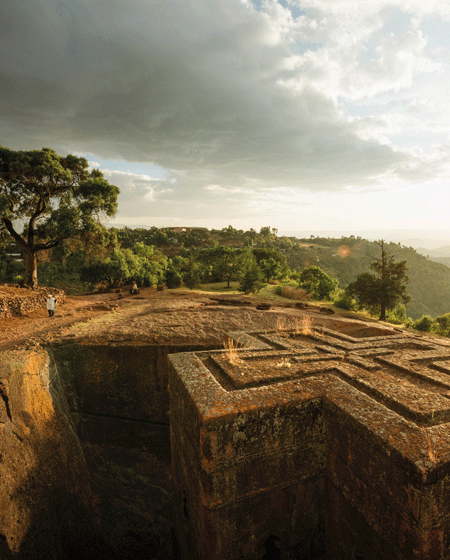 Further south in the highlands is Lake Tana, which feeds the Blue Nile river. The lake has more than 30 islands, many of which house monasteries and churches dating to the 14th century. Their remote location is hardly a coincidence. Religious treasures were hidden on the islands (away from marauding invaders) and some, such as Daga Island, were used as the last resting place of a number of Ethiopia’s long line of emperors.

However, it’s for the 45m-high Blue Nile Falls and the market town of Bahir Dar that most come to Tana – together they are among Ethiopia’s most visited attractions.

Still in the highlands, the ‘golden triangle’ of Aksum, Lalibela and Gondar are the other reason visitors head north. It’s at Aksum, the ancient centre of Ethiopian history that some believe the Ark of the Covenant came to rest, taken there by the Abyssinian Emperor Menelik I more than 2 000 years ago, after the sacking of Jerusalem by the Babylonians. More precisely, it’s said to be locked in the crypt of the 4th century Church of Our Lady Mary of Zion, one of the ancient city’s most revered sites.

Pre-democracy and the Derg, Ethiopian emperors had to trek to Aksum to be crowned, one reason it rivals far larger cities for the number of churches it hosts – most chose to build their own ode to themselves in the highland city. There are also about 80 mosques, 100 shrines and more Zionist and Orthodox pilgrims than you can shake a stick at.

The religious flavour is hardly incidental – along with Armenia, Ethiopia was one of the first countries to formally take to Christianity (in the 1st century AD) and it is the only African country to have been Christian before its colonisation (by Italy). It is also the only one to remain Christian through the rise of Islam in the 7th century.

Yet despite all that, Aksum is not the region’s cultural epicentre – that distinction falls to Lalibela, a small holy site further south, home to no fewer than 11 medieval stone-carved churches dating back to the 12th century and earlier.

They are distinguished by their form – each is monolithic, hewn from rock, many below ground level. Most famous of all is Bete Giyorgis, or the Church of St George, in the shape of a cross, built by the town’s founder, King Lalibela. A devout Orthodox Christian, he sought to recreate Jerusalem and the 11 churches are divided into representations of Christ on Earth and God in heaven. 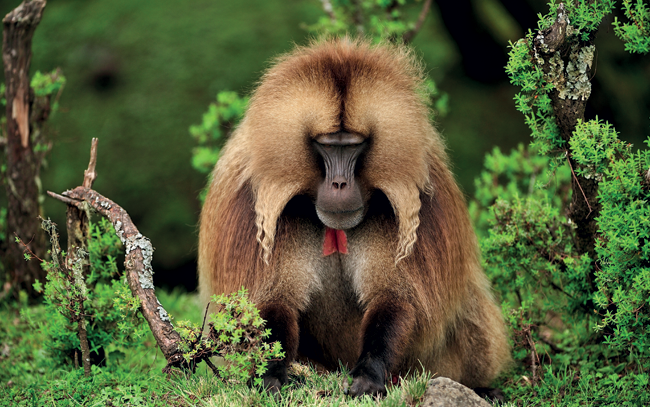 If Lalibela is its royal namesake’s legacy then Gondar, further south, undoubtedly belongs to Fasil, the 17th century emperor with an Orthodox zealot’s zeal for building churches – some 44 by most counts, as well as a spectacular castle, the Fasil Gemb in his 70 000 m2 royal enclosure. Gondar was Fasil’s fortress city, the first in Ethiopia and the country’s capital until the mid-1800s, when it proved not fortified enough and was sacked and burnt by the invading Islamic hordes from Sudan.

Not content with world firsts for Christianity, stone masonry and playing host to an abundance of endemic fauna, Ethiopia also lays claim to humankind itself, with the Afar Triangle on the Eritrean border holding secrets to early hominin evolution.

It’s a place both fascinating and fearful, one of the lowest places on land and consequently the hottest. Salt deposits are mined by the local Afar in caravans that set out for the salt lakes in the early morning and return before the punishing heat of midday. The depression’s secrets – those ‘missing link’ bones – are thrown up by seismic activity; the whole area is part of a mid-ocean ridge, the only section visible on land outside of Iceland.

Three tectonic plates move apart here, dropping the floor of the valley by an average of 1 cm a year, releasing molten lava into one of only five lava lakes in the world as they separate. The active volcano, Erta Ale is the centre of the region, near the settlement of Dallol. It’s not easy to get to but with the right guide and good timing, Danakil is the triumph of a lifetime. 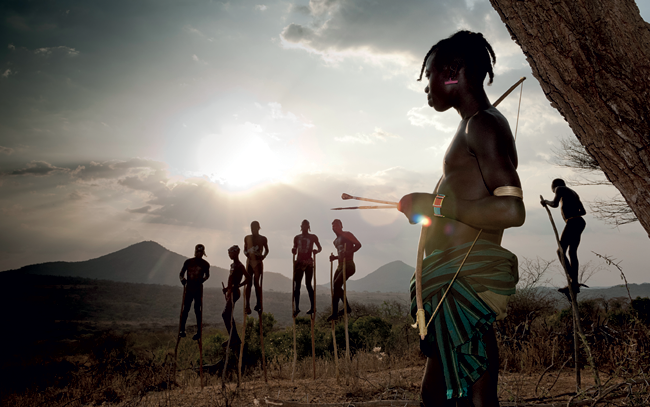 Ethiopia is an African original, a largely unexploited destination that is as complex as it is rewarding. However, Ethiopia is not without its troubles. Recent headlines centre on ethnic disputes between the ruling Tigray and the larger Oromo and Amhara groups. While tensions remain, signs are that government is at least talking to the largely peaceful opposition groups.

That is good news. If not addressed, internal conflict is the one stumbling block that could undo the state’s attempts at a tourism master plan, which would be a crying shame. Here’s hoping…