I’m astonished. Arvo Pärt? These boys are brave. And good. In the Drakensberg Boys Choir auditorium, the Estonian composer’s pared-down, complex Ave Maria takes flight. It’s beautiful, fully the measure of the notoriously difficult genius’ creation. And entirely apt – out here in the foothills of the Drakensberg, with Cathkin Peak and Champagne Castle as a backdrop, it could be pastoral Europe.

The Berg, as it’s affectionately known, forms the edge of the high inland plateau of Southern Africa. Where the plateau falls off to meet the low-lying eastern seaboard, a dramatic series of valleys, cliffs, peaks and caves exist. This escarpment stretches from Mont-aux-Sources in the north to East Griqualand in the south. It’s also, frankly, a difficult place to get the full measure of, given that it is so scattered, diverse and, in parts, inaccessible. The trick is to plan well, do your research and then give in to the inevitable left-field discoveries. Getting outdoors is essential and the Berg is a favourite for mountain bikers, canoeists and hikers. And as COVID loosens its grip, a multitude of races will come back, the Grindrod Bank Berg and Bush among them.

The music morphs into Awie van Wyk’s Neem My in Beskerming and we’re back in Africa. The boys’ choir is based in the Cathkin Valley, close to the Champagne Valley, and it’s to this northern area of the Berg that most visitors come, dramatic as it is. The popular part of the Berg is broadly four valleys – the Champagne Valley, the Ndedema Valley (with Cathedral Peak), the Middledale Pass Valley and the Amphitheatre Valley. It’s the last that gets all the attention, that famous half battlement of rock finding its way onto every biscuit tin and brochure in the land.

It’s here that the Cathedral Peak Hotel is located. An old favourite close to Monk’s Cowl, right in the shadow of the most famous section of the Berg, the historic hotel has been through good and bad times, and has now been reinvented as an upmarket family hotel. The current management is from the same family as the original 1937 owners. Our aim was to find an ideal spot to soak up the winter sun   and enjoy the views. Out on the hotel’s stoep, overlooking the extensive gardens, proved to be just the panacea. There really are few better located hotels in the Berg. Yet there’s much more to the Berg than just the popular section of the proclaimed uKhahlamba Drakensberg World Heritage Site. Below, the mountain range snakes down towards the Eastern Cape and the snow resorts of Rhodes and Barkly East and on to Lady Frere. This southern section is less heralded but often wilder and less touristy. It has a rolling, almost Scottish Highlands feel, less severe and certainly better for gentler walks and hikes than the more strenuous northern region. Places such as Lotheni Nature Reserve, the Sani Pass and the town of Underberg make it as interesting as the north, but it’s free from the traffic and the coach tours. Work on tarring the Sani Pass is ongoing; by late May the bitumen was half laid – so, if you want to experience the dirt-road upper Sani, go soon.

The Central Berg is less visited too, though its infrastructure is better. To get there, most visitors arrive from the KZN Midlands, that patchwork of intriguing shops, restaurants and quaint places to stay. Indeed, many weekenders stay in the Midlands and venture into the Berg proper by car. If that’s your strategy, then two places recommend themselves. Cleopatra Mountain Farmhouse, near Balgowan, and Rockwood Farmhouse in the Karkloof Nature Reserve both offer exceptional accommodation in spectacular surroundings. Rockwood Farmhouse, set on Spitzkop Farm in the mist-belt forests and grasslands of the Karkloof, is next to a large dam, far from the weekend Midlands meanderers. Contemporary in design, the exclusive, luxury, open-plan home is extensively glazed, offering spectacular views of the reserve.

The massive stoep recommends itself, obviously – it’s the idyllic spot to soak up the scenery and relax with a mug of hot chocolate and a good book. Of all the patios and stoeps we tried, Rockwood’s was the best, quite wonderful in its combination of serenity and fashion forwardness.

Cleopatra Mountain Farmhouse, meanwhile, has become the trendiest foodie spot in the Berg. Accommodation is in a beautiful old farmhouse and the emphasis is on good living; Richard and Mouse Poynton, by now legends in their own lifetime, are food fanatics and the menus are exceptional. Culinary weekends and excursions to the fresh-food markets and farms of the area are popular. Or guests can simply withdraw and enjoy the combination of water (the public lounges are literally built out over the dam) and pampering (the spa sees to that). Insider tip? Don’t bother taking a book – the extensive library at Cleopatra is a joy to behold.

Back up north, Van Wyk’s plaintive song becomes Sanctus, from David Fanshawe’s Afro-opera African Sanctus, and the roof is lifted off the auditorium. The composer, we are told, was partly inspired by this area of the Berg. It’s easy to link music to scenery; of all the dramatic landscapes in the Drakensberg, none is better than the area around Cathkin Peak, an area rich in cultural and geological history.

It’s also called the Mdedelelo Wilderness Area, which means ‘he who cannot be overcome’ in Zulu. On the northern side of Cathkin Peak is Mount Memory, visible from the choir school, which sports a large cross honouring those who died in the Second World War. Of course, the area that gets all the press is still further north, just south of the Golden Gate Highlands National Park. Royal Natal is grand indeed, and if the dragon that Piet Retief and his party of 66 wagons named the range after in 1837 lives anywhere, it’s here. 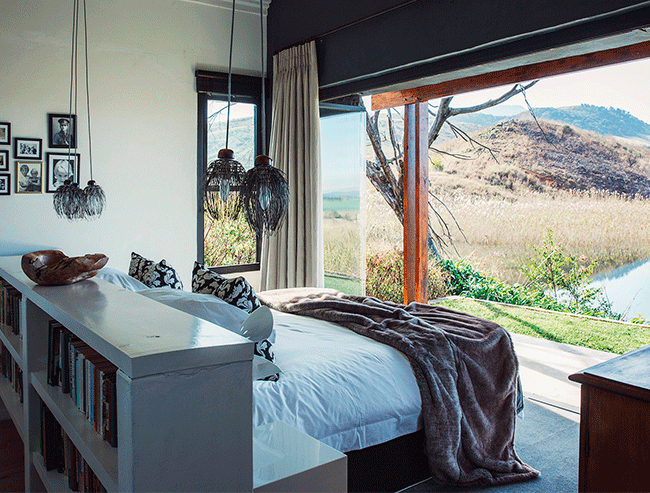 You can access the lower Amphitheatre foothills from the Mahai camping site, walking up the Cascades footpath, following the Mahai river. The concrete path peters out above the Tiger Falls and Lookout Rock, but a number of wilder walks and hikes continue on from there. Tiger Falls is a fairy glen, especially in the golden light of morning. Two tranquil pools are separated by gentle falls and the whole site is overhung by indigenous forest, Gudu Bush and Dooley Ridge, high above.

But most come to Royal Natal for the Tugela Falls, the world’s second-highest falls after the Angel Falls in Venezuela. Here the Tugela river literally falls off the escarpment, tumbling nearly a kilometre from the highlands to the midlands below. There’s no need to hike to the falls – they are visible from the main Royal Natal road. But if walking, and then hiking, is what’s wanted, two main routes reach to the base and top of the falls. The Tugela trail leads up the Tugela Gorge and is an easy 7 km. 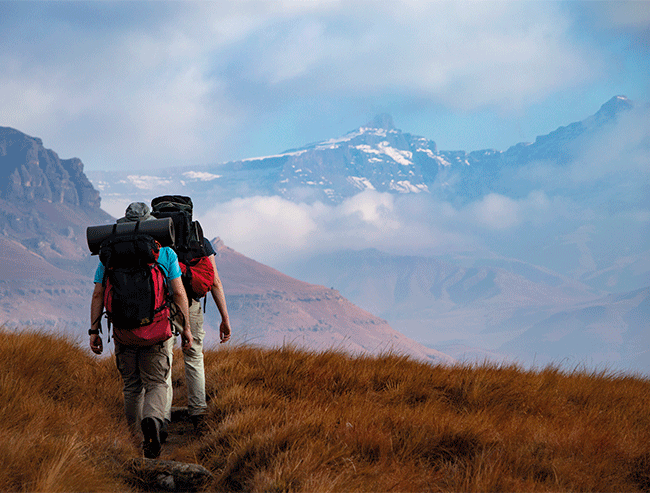 The other, the Mount-aux-Sources trail, begins at the Sentinel, high up on the escarpment. To get there you have to approach the Berg from the Harrismith side of the N2, through Phuthaditjhaba in Qwa Qwa on the R57. From Mont-aux-Sources and the Sentinel, the trail ridges the escarpment all the way to the Tugela Falls. It’s probably the most spectacular hike in the country, if not the continent. North is also where Montusi Mountain Lodge is located. Montusi sells itself on its uninterrupted view of the famed Amphitheatre. The atmosphere is thatch chic and the accommodation is in the form of a central lodge, exclusive garden suites or spacious self-catering cottages. It’s very popular with upcountry weekenders and can get busy, so book well ahead.

Despite the central location, it has an air of whispered quiet. Quietly indulgent is perhaps the better phrase. The owners are excellent chefs and make their own chocolate as well as bread, enjoyed at dinner and breakfast in the restaurant. Both meals are included in the lodge’s pricing. Back on stage, the conductor is taking his own bow, the boys already filing out. The finale was Gustav Holst’s World in Union, rousing as only a well-drilled choir can manage. Come December, the singers will be leading the region’s biggest festival, Christmas in the Berg, especially poignant after the travails of the past couple of years. Book ahead, it’s another reason to visit the area, as if any is needed.