In a rugged, sparsely populated area in the Northern Cape, the ancient Kalahari landscape meets the future of energy generation. Here the land is home to wide-open spaces, game farms, manganese and iron ore mines – and now also to SA’s first operational large-scale solar PV wheeling project. Follow the unpaved R380 road from Kathu towards Hotazel, and you will see, to your right, row after row of solar PV panels – or, more precisely, bifacial solar modules that expose both their front and back sides. Mounted on single-axis trackers, they rotate to track the sun throughout the day, absorbing irradiance from the sky as well as from light reflected off the ground.

The 10 MW Adams solar project started operating in November 2021 to provide clean energy for Amazon Web Services. It powers the US tech giant’s SA data centres, as far as 1 000 km away, using the Eskom grid. This type of ‘wheeling’ project – where privately generated power is transmitted to the off-taker via a utility-owned power network, often across large distances – is a breakthrough for SA, agrees Peter Twesigye, a research lead for the Power Futures Lab at the UCT’s Graduate School of Business (GSB). He says projects such as these are an enabler as they bring the economy another step closer to bridging the gap between electricity demand and supply.

By raising the threshold for licence-free private power generation from 1 MW to 100 MW in June 2021, the government opened up huge opportunities for companies – not only for those wanting to instal smaller roof-top solar systems on their office, commercial and industrial properties, but also for very large electricity users, such as mines and heavy industry.

The Minerals Council South Africa has hailed this increased threshold as ‘probably the government’s biggest structural reform in two decades’. Mining companies are in various stages of building plants, conducting studies, planning and applications for up to 3.9 GW of renewable solar, wind and battery energy, valued at R60 billion. 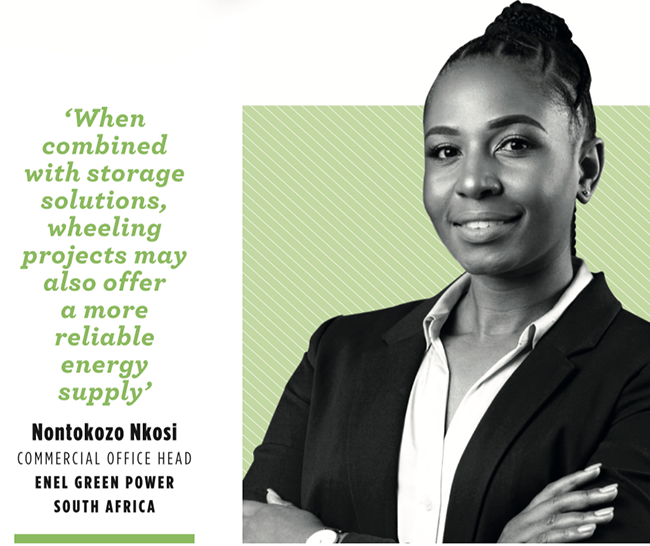 ‘The process or the use of wheeling as a solution to deploy renewable-energy projects for South African companies has gained serious momentum,’ says Nontokozo Nkosi, head of the commercial office at Enel Green Power South Africa, who also credits the recent amendment to Schedule 2 of SA’s Electricity Regulation Act (the legislation behind the raised 100 MW cap) as a direct driver of the increasing uptake. ‘Wheeling allows for quicker implementation of renewable projects because of the use of permitted “shovel ready” projects.

‘Companies may benefit from economies of scale as the wheeling projects may have the ability to sell the energy to multiple off-takers. When combined with storage solutions, wheeling projects may also offer a more reliable energy supply.’ She adds that Enel Green Power South Africa is in advanced discussions with some commercial and industrial solar companies in SA to deploy renewable-energy projects through wheeling.

Such projects are crucial building blocks in the country’s just transition to a low-carbon economy, because their decentralised nature enables renewable-energy producers to generate clean energy in one area (for example, on wind farms along the stormy West Coast and Eastern Cape, or solar PV farms in the sun-drenched Northern Cape) and supply end-users in geographically distant locations.

‘Essentially, wheeling allows your business to buy clean, private power at a more efficient rate than coal-based power – while still supporting state utility Eskom,’ says the SOLA Group, which is the independent power producer behind the Amazon project. ‘For our clients, this means that electricity can be generated in an area with lots of space and great solar resource, in order to supply an energy consumer that may not have the space or the solar resource available.’ Adams solar farm, for example, takes up 20 ha of vast empty land near Kathu that would simply not be available at the urban data centres where the electricity is needed. In addition to the cost savings, there are also the environmental and social benefits. This particular project, which is more than 63% black-owned, will generate up to 28 000 MWh of clean energy per year – roughly the annual electricity consumption of 8 000 average SA homes. It will save 25 000 tons of carbon emissions, the equivalent of taking 5 400 cars off the road.

‘It is immensely important that, while we are rebuilding energy generation in South Africa, we are also developing South African companies and skills,’ according to SOLA CEO Dom Wills. The Amazon project created 167 jobs during construction (63% of which were from the surrounding area) and continues to provide jobs in electrical maintenance, cleaning and security.

More clean-energy jobs are on the horizon at South African Breweries, which recently announced a large-scale power purchase agreement based on waste-to-energy. The group has committed to reach 100% contracted renewable energy by 2025. All of its breweries in SA are already using solar power, which is currently being expanded, while the new contract will augment this with industrial-scale biogas. Project developer Bio2Watt is currently building the Cape Dairy Biogas Plant at one of the country’s largest dairy farms, where the slurry manure from 7 000 cows and other organic waste will be converted into biogas. Bio2Watt is a pioneer in waste-to-energy on the continent, having successfully run a similar biogas project for BMW’s Rosslyn plant near Pretoria since 2015. 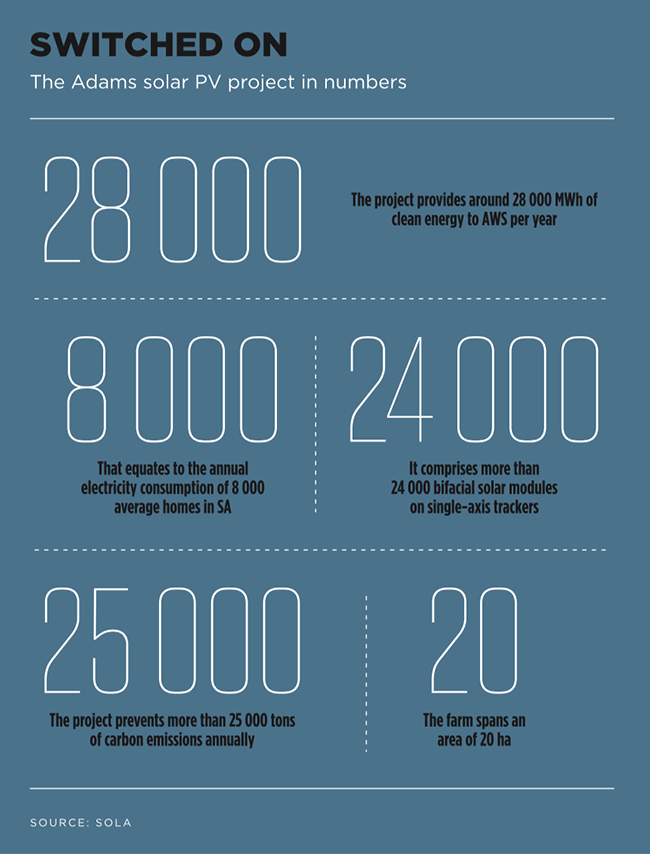 ‘With the energy-capacity constraints we face in South Africa, you would be hard pressed to find any commercial property owner who is not considering renewable-energy generation for their own use,’ says Georgina Smit, head of technical at the Green Building Council South Africa (GBCSA). ‘Solar PV is definitely the star of the moment for our members. With the costs of the technology and equipment having come down so dramatically in recent years, and South Africa’s increasing electricity tariffs, the payback periods on a sizable solar PV installation can be as low as two years.

‘More than looking at other types of renewable energy, there is also a significant focus on energy storage. More affordable and efficient ways to store renewable energy would be welcomed by property owners.’

Sustainable energy generation plays a paramount role in green building, particularly when it comes to the sector’s net zero carbon goals. ‘Incorporating renewable energy into your building is an important way to reduce your carbon footprint, to reduce your energy costs and to build resilience into your assets against power shortages and outages,’ says Smit. She explains that much of the effort is still in its early stages, as Green Building Council members are conducting feasibility studies to weigh up their options.

Property owners with retail and certain industrial facilities in their portfolios, adds Smit, are leading with the larger rooftop installations, as their buildings generally have enough space to generate the demand on-site. One of the proactive members is the listed property investment firm Liberty2Degrees (L2D), whose entire portfolio of shopping malls achieved GBCSA Green Star ratings last year, with 1 MW solar PV projects at Liberty Midlands Mall in Pietermaritzburg and Eastgate Shopping Centre in Bedfordview already operational. ‘Our plan is for a renewable energy roll-out across the portfolio,’ says Amelia Beattie, L2D chief executive. ‘The installation of a 1 MW solar project at Liberty Promenade in Mitchells Plain in 2021 was approved, with the expected completion this year. Achieving our sustainability objectives reduces our exposure to commercial risk and asset obsolescence by ensuring we are future ready.’

To support this, the company aims to raise awareness for renewable energy among tenants and shoppers, and installed three solar-powered trees on Eastgate’s rooftop piazza. The striking man-made trees illuminate the piazza area when it gets dark and have become a talking point among shoppers.

Generally, SA property owners only cover their own energy needs as it does not make financial sense to generate more power than they need at that particular building, says Smit. ‘There are still limited opportunities for them to feed excess energy back into the grid and get reimbursed for this, or to wheel power to their other properties where it could be used.’ 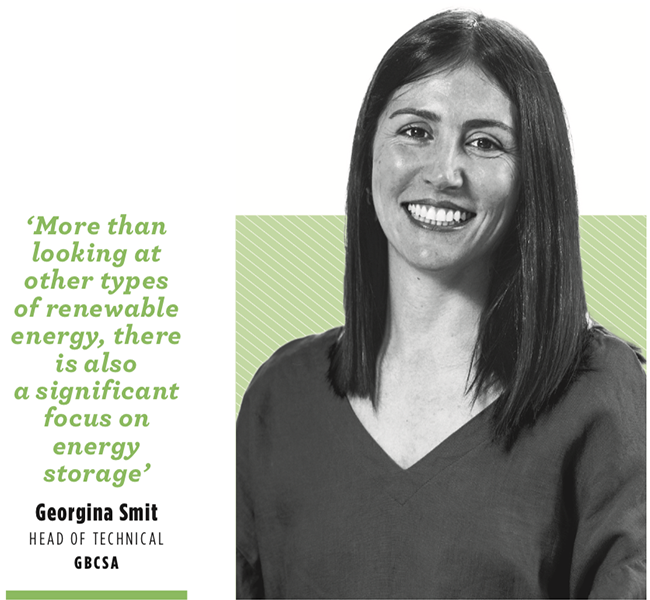 This, however, is changing. The City of Cape Town already operates a feed-in system for small-scale embedded solar PV generation, although all plants need to be less than 1 MW and must be net consumers over a rolling 12-month period. ‘Net generators are not allowed,’ says Beverley van Reenen, Cape Town mayoral committee member for energy. ‘The city is considering future net generation for larger installations and would need to ensure that network, technical and legislative requirements can be met.’

Getting this right in SA is a complex issue that involves regulators, policymakers, utilities, end-users, development finance institutions and the private sector.

Twesigye, whose work at the Power Futures Lab aims to build capacity in energy-infrastructure investment, reform and regulation, notes that UCT GSB has just partnered with six other institutions in energy to launch the African School of Regulation initiative. The aim is to accelerate the energy transition on the continent and ensure that it is just, inclusive and cost-effective.

Clean energy is an increasingly important consideration for SA, particularly in mining and other energy-hungry sectors. Yet Eskom will remain a critical source of baseload energy, emphasises the MCSA, seeing that solar and wind aren’t as reliable when it comes to providing sustainable levels of around-the-clock electricity to keep mine employees safe and production steady.

However, action from the government is urgently needed to unlock the 3.9 GW of renewable-energy projects in mining, which, according to MCSA CEO Roger Baxter, could go a long way towards easing the pressure on Eskom to the benefit of other industries and the country as a whole. ‘The existing regulatory and licensing processes to implement renewable-energy projects are cumbersome and a major impediment for investments,’ he says. ‘The measures that could be employed to speed this up include the provision of emergency tax incentives, shortening environmental authorisation and Eskom-related grid-tie connection processes, providing a clearer framework of wheeling on the national grid, and ensuring a shortened smart-tape process.’

Help may be on the horizon in the shape of Sipho Nkosi, Sasol chairperson and a former president of the then-Chamber of Mines, who has been appointed to the Presidency to lead a team tasked with identifying and removing red tape. Should this succeed, all of SA stands to benefit from expedited investment in solar, wind and other clean energies.