Africa’s legal medicinal cannabis market could be worth $7.1 billion by 2023 – that’s according to a report by Prohibition Partners, a research and consultation firm in the legal cannabis industry. The report allocates the bulk of Africa’s potential cannabis industry to a handful of countries, including SA, Nigeria, Lesotho, Zimbabwe and Morocco, with SA’s market valued at $1.85 billion in that time frame.

On the face of it, the industry certainly seems to be heading in the right direction.

In December 2021, cannabis investment holdings group Labat Africa listed its shares as a dual listing on the Frankfurt Stock Exchange, a first for a cannabis-focused company in SA. This was followed by a R300 million cash injection from California-based GR Global Ventures, the acquisition of a 100% share in Miami-owned CBD lifestyle brand Echo Life, as well as the purchase of a medicinal-cannabis cultivation facility in Kenton-on-Sea in the Eastern Cape – a move that saw their shares jump by 8.33%.

Highlands Investments, a medical-grade cannabis producer growing mainly in Lesotho, merged with SA cannabis brand Goodleaf in June 2021, and in August 2021 announced the sale of 8.5 tons of its Highlands Pure THC and CBD flower and trim into the European medicinal-cannabis market, following a previously successful shipment of 176.5 kg of THC flower exported to Europe in April. Intadose Pharma, a Canadian-based corporation, completed a record shipment of medicinal cannabis weighing 2.125 tons from SA to North Macedonia on 25 December 2021.

While the above developments are encouraging, there is broad consensus that the gains are nowhere near what they could be, and the SA cannabis market is not yet delivering on its ‘golden-ticket’ potential to catalyse economic prosperity, lift thousands (if not hundreds of thousands, over time) out of poverty, provide pain relief and boost our mental and physical health.

This is something that President Cyril Ramaphosa tacitly acknowledged in his 2022 State of the Nation Address. ‘The hemp and cannabis sector has the potential to create more than 130 000 new jobs,’ he said. ‘We are therefore streamlining the regulatory processes so that the hemp and cannabis sector can thrive like it is in other countries, such as Lesotho.’ Just how this process will be streamlined, though, is yet to be revealed.

The Department of Agriculture, Land Reform and Rural Development estimates that the industry is currently worth R28 billion in SA and, while already making up 70% of the African market, can compete on a global scale. But is this true? 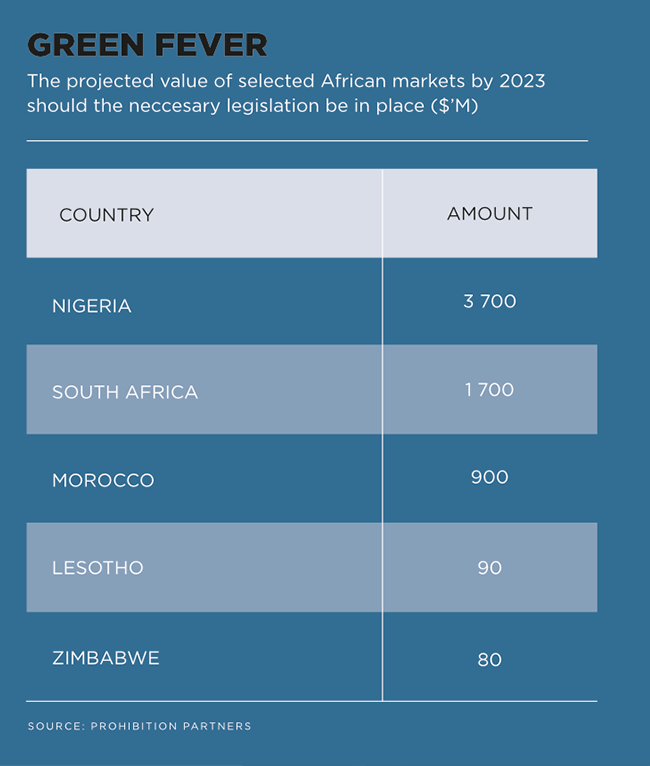 ‘South Africa has made some positive steps towards creating a legal cannabis industry, but the manner in which it has happened has been sub-optimal and very incongruent,’ says co-founder of the Africa Cannabis Advisory Group (ACAG), Sibusiso Xaba. ‘On the medical cannabis side, in 2019 South Africa created a legislative and regulatory framework by which companies could cultivate and process cannabis. And it all sounded like good news. But the reason this has not had the desired results is because we’ve done this without creating a framework for our domestic industry. So, right now, if you have a medical-cannabis licence, and you raise enough money, the only place that product can go is to international markets where the product is legal and allows for importing, such as Israel, Australia, Germany, the UK and maybe Switzerland.’

The problem comes in, says Xaba, when potential exporters discover the gap between the South African Health Products Regulatory Authority’s (SAHRPA) licensing and export requirements, and international import requirements. Producers that may have jumped through all the hoops required to get their product export ready on the domestic side then hit a wall when it comes to international requirements, such as more stringent quality standards and proof of supply stability, which can take additional months to meet. Many companies cannot sustain the delay, nor can they turn to the domestic market to sell their product as it is not yet viable.

THC, the psychoactive component of cannabis, is listed as a Schedule 6 drug in SA. Medicinal cannabis cannot be obtained (legally) without a prescription and an application for SAHRPA approval. The local medicinal-cannabis market is underdeveloped and the practice of prescribing medicinal cannabis or cannabis products is rare. Bear in mind that the first legal prescription here only occurred circa September 2021, according to an online news report. Currently, the health-supplement market – mainly products containing cannabidiol, aka CBD, below a certain threshold – is the only viable cannabis market sector in SA, and is still relatively niche.

In 2021, Africa exported more than 15 tons of legal cannabis, a tenfold increase from 2020. Cannabis exports from SA are expected to grow, but many operators are at risk of bankruptcy due to their inability in meeting international standards, and the longer-than-anticipated ramp to scale production and sales. These risks would be greatly mitigated with the development of a robust local medical cannabis market.

While Ramaphosa has not yet revealed how he plans to streamline the regulatory process, the Department of Agriculture, Land Reform and Rural Development does have a plan, namely, the National Cannabis Masterplan Framework, which was revealed at the National Economic Development and Labour Council in June 2021. It includes nine pillars of development, namely regulatory systems; sustainable seed supply systems; R&D; sustainable producer-support systems (including a model to include smaller growers in the hemp and dagga value chains); market development; supplier-development systems; manufacturing and product development; education and training; and communication and awareness. The plan also identifies challenges, acknowledging legal obstacles, lack of infrastructure and supply chains.

The masterplan is yet to be implemented, and how effective it will be remains to be seen.

Most of the cannabis market remains in informal, illicit trade. New Frontier Data’s 2021 Global Cannabis report estimates that consumers globally spent about $415 billion on high-THC cannabis in 2020, ‘with annual spending projected to climb to $496 billion by 2025. Much of the world has not yet legalised cannabis, and nearly all the demand resides in illicit or unregulated markets’. 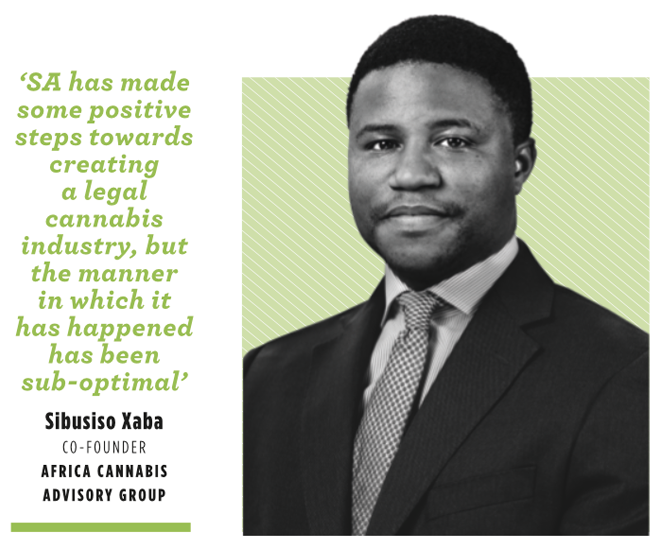 SA is no exception. The fact that it is easier and cheaper to obtain cannabis illegally is an enormous obstacle. Concerns are also growing that corporate interests may be muscling in on an industry that has sustained small-scale growers, albeit informally, for decades, and that regulatory efforts may sideline rural growers and hobble SMEs and entrepreneurs.

Gabriel Theron, founder of Cilo Cybin Pharmaceutical, a biohacking, biotech and pharmaceutical company, is not optimistic that SA legislation will open up any time soon. ‘We are so far behind what’s happening globally; we’re playing catch-up. Lesotho is moving faster than we are. Yes, there is some investment in the space, but the big fish have already come and gone.’

Cilo Cybin is the first and only company with a licence to grow, process and pack cannabis in SA, and Theron plans to list Africa’s first cannabis special acquisitions company, titled Cilo Cybin Holdings, on the JSE later this year, with a view to acquiring Cilo Cybin Pharmaceuticals as well as other genetics and wearable health-device companies in the US and SA. Theron views agricultural cultivation of medicinal cannabis as ‘a race to the bottom’ in SA. ‘We have missed the boat. It’s cheaper to import raw materials or compounds than it is to buy it domestically. I’ll give you an example – I am buying already-extracted broad spectrum CBD from Switzerland and importing it at a lower cost than I would if I grew it myself, even though I have all the correct licences. No THC, 96% CBD. South African growers have already been undermined by the global market and a lack of political will.’

For this reason, he believes the major economic potential for entrepreneurs in the cannabis space, as things currently stand, is in building cannabis-related brands in the wellness and supplements market, rather than in cultivation.

Xaba is optimistic though, and he is well placed to make a forecast – with a background in deal structuring, venture capital and capital raising, at times assisting the National Treasury in raising funds internationally to finance critical infrastructure projects, he quit his investment banking job in London after investigating the potential of the cannabis market to transform SA. He spent the next four months on a research roadshow, travelling to the world’s leading cannabis markets including Canada, Israel and Europe, and then moved back to SA to co-found ACAG to assist African stakeholders including entrepreneurs, investors, governments and corporates navigate every facet of the local and global cannabis markets.

‘If we play our cards right, this industry has the potential to address many of our pressing healthcare, nutritional, sustainability and employment challenges. We can not only form a domestic solution to a lot of our problems, but become a high impact international player too.’

What’s clear is that any positive forecasts on the potential value of the cannabis market in SA are heavily reliant on the ‘cards’ of regulation and legislation, which will need to be amended chop-chop if the legal market is to catch up and open up – to all. So far, big corporates seem to be the only entities with the resources to manoeuvre through the narrow corridors of SA laws and regulations.

An apt summary comes from cannabis legal specialist Bret Pollack. ‘It is undoubtably very encouraging that the government is drafting our national cannabis policy. But many still argue that it is taking too long to roll out into a robust, rational, equitable, inclusive, locally integrated legal and regulatory framework. Moreover, as long as the Drugs Act continues to criminalise dealing in any part of the cannabis plant, we cannot speak of a meaningful South African cannabis economy, socially and economically emancipated from oppressive police and enforcement action characteristic of the ongoing prohibitionist era.’