Since early last year, well-off individuals and companies – who had been relying on trusts as part of their estate planning to contain potentially heavy tax bills that asset-rich estates can sometimes attract – were forced to rethink how they make low-interest or interest-free loans available to trusts to avoid ending up having to pay donations tax. This was as a result of the introduction of section 7C of the Income Tax Act that came into effect on 1 March 2017, according to James Whitaker, director at PwC’s Cape Town office.

He says that section 7C is a government instrument to address avoidance of donations tax and estate duty through the transfer of assets to a trust by way of a loan account by a related party to the trust, such as a trust beneficiary or founder of the trust.

Yet soon after that date, on 19 July 2017, government hurried to take further steps to curb loopholes and extended the ambit of section 7C in respect of a loan, advance or credit provided to a trust.

Hylton Cameron, tax director at Grant Thornton in Johannesburg, says that in terms of the latest Taxation Laws Amendment Act in December 2017, certain provisions came into effect retrospectively on 19 July 2017, closing possible loopholes in regard to loans provided to trusts in terms of section 7C. ‘Two measures that taxpayers had used to circumvent section 7C had caught the attention of National Treasury. Therefore, amendments have been enacted to address these so-called “schemes”.’

Cameron explains the first, scheme (a), involves the taxpayer advancing an interest-free or low-interest loan to a company whose shares are held by the trust. Previously by advancing the loan to the company instead of directly to the trust, the anti-avoidance measure of section 7C did not apply. The second, scheme (b), involves taxpayers entering into an arrangement under which the loan claim of the person who made the loan, advance or credit to the trust, is transferred to another person who is usually a current beneficiary of the trust, or a future beneficiary such as a spouse or child. 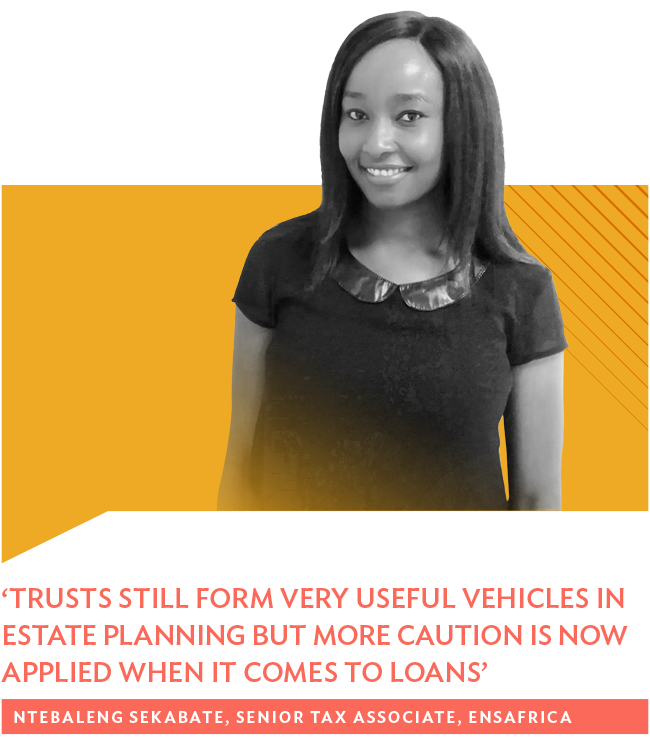 He adds that SARS has nipped these schemes in the bud by amending the legislation. ‘Without going into all the details, the amendments now cater for loans to companies (scheme a) if the trust owns 20% of such company. In such scenarios, the provisions of section 7C will be applicable. The other amendment (scheme b) is that if a person connected to the trust or the company (referred to in scheme a) acquires a loan claim owing by a trust or a company (referred to in scheme a) that person will be subject to the provision of section 7C.

‘These amendments are likely to cause a headache for taxpayers and even worse, some taxpayers who may not have fallen foul of section 7C, could now be affected with such amendments, especially with such amendments being retrospective,’ says Cameron. He adds that in terms of the law being retrospective, per the Draft Taxation Laws Amendment Bill issued on 19 July 2017, taxpayers were warned of the intended change in legislation. ‘One may argue that for the amendment to be effective from the date of the draft amendment, is to say the least, problematic.

In a recent interview with Moneyweb, CEO of the Fiduciary Institute of Southern Africa, Louis van Vuuren, says that it was not a straight-forward process for SARS to levy the new donations tax flowing from the amendments to section 7C, and that he expected SARS would first need to do a degree of ‘systems development’, which he didn’t expect would be ready by 31 March 2018 when the first section 7C donations taxes were due.

Despite these challenges, Cameron notes that he has not seen many changes to trusts as a result of section 7C. ‘A possible reason is that some taxpayers may not be aware of the changes in the law and we are not always aware of such transactions. Various articles have been published on the issue and some taxpayers are certainly aware.’

Meanwhile, the latest rate for donations tax above a certain threshold was raised to 25% from 20%in the last national Budget in February, according to online tax website South African Tax Guide. It reports that then Minister of Finance Malusi Gigaba made no changes to the taxation of local trusts this year, but in relation to foreign trusts, the proposals mooted during the course of 2017 are to be revisited. These were aimed at taxing distributions from foreign trusts that in turn held shares of foreign companies. Last year’s proposals were highly prejudicial to taxpayers and there was extensive pushback from tax practitioners and taxpayers alike.

Although the taxation of trusts is not affected as such, the increase in estate duty to 25% in relation to estates bigger than R30 million continues to make the use of trusts an effective vehicle for estate planning purposes. The website also states that donations of more than R30 million a year will be subject to a higher rate of 25% up from 20%. 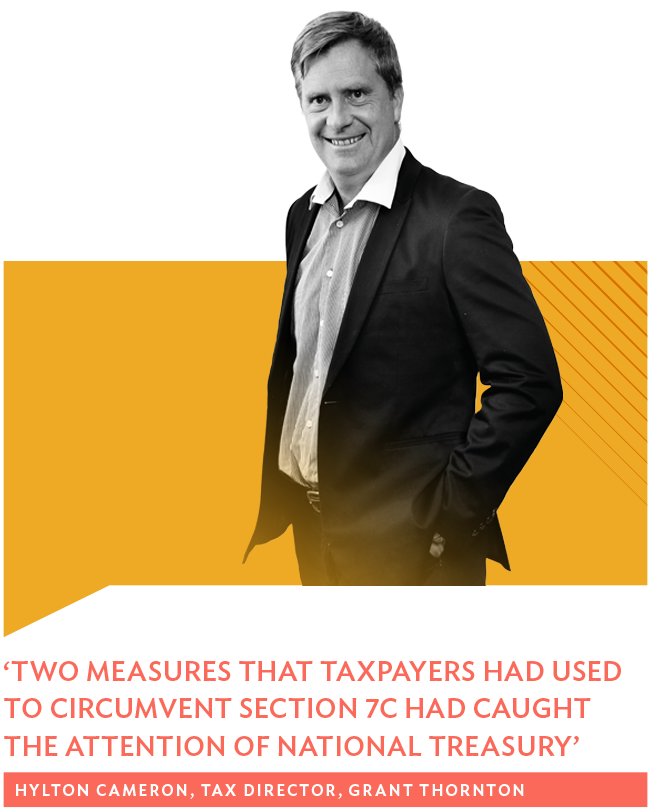 Ntebaleng Sekabate, senior tax associate at ENSafrica, explains that the use of trusts for estate planning purposes has become less tax efficient since the introduction of section 7C. ‘Prior to the introduction of section 7C, taxpayers were able to dispose of assets to trusts on a loan account without incurring any tax liability. This allowed them to ensure that the growth in the value of the assets happened in the trust, effectively “freezing” the value of their personal estate, which would attract estate duty upon their death,’ she says.

‘Taxpayers therefore avoided being taxed at the time of death at the full value of their assets through the use of low-interest or interest-free loans to trusts. But this option has effectively become less tax efficient because the difference between the interest payable on the loans and the official rate of interest is now treated as a continuing donation by SARS. This is the case where the loan is made by a natural person or a company connected to that natural person.’

Therefore, according to Sekabate, any interest foregone by the taxpayer on the low-interest or interest-free loan would be treated as an ongoing and annual donation. Also, the taxpayer cannot claim any deduction, loss, allowance or capital loss from SARS on the favourably termed loan to the trust.

However, she adds that trusts still hold important benefits for wealthy individuals as their sole purpose is not only to avoid paying estate duty at the time of death. ‘Trusts are also used by many to protect assets from creditors as well as from potentially irresponsible heirs who might squander long-accumulated valuable assets. Therefore one should not entirely rule out the use of trusts as an estate planning vehicle – although the taxpayer would pay tax on the interest foregone, the growth in the value of the assets disposed of to the trust would still happen.’

In cases where the growth in the value of the assets appreciates exponentially, such growth would still be excluded from the taxpayer’s estate when that person dies and no estate duty would be payable, Sekabate explains. ‘Trusts still form very useful vehicles in estate planning but more caution is now applied when it comes to loans, credit or advances granted by an individual or a company, directly or indirectly, to a trust.’

Whitaker says the year of assessment that ended on 28 February 2018 will be the first year that SARS will apply section 7C and deem donations to have been made.

‘All loans, credit or advances made to trusts by related persons or companies on or before 1 March 2017 are affected. The amount of the donation will be the difference between the amount of interest actually incurred on the loan, and the amount of interest that would have been incurred at the official interest rate.’ However, according to Whitaker, exemptions can be granted in some cases.