Earlier this year, then Minister of Finance Malusi Gigaba, in his one and only Budget Speech, appeared to endorse public-private partnerships (PPPs) as an important mechanism for delivering infrastruc-ture in SA. Gigaba was removed from the ministry by President Cyril Ramaphosa shortly after his speech but more significant is that the longer-term views of National Treasury were reflected in the 2018 Budget Review, which unambiguously espouses PPPs. Nevertheless, SA has a long way to go before it revives the potential of what the Economist Intelligence Unit once described as the only mature PPP environment on the continent.

‘There’s no doubt that they can deliver,’ says Kieran Whyte, partner at Baker McKenzie. ‘But after a promising start, we got caught up in a different discussion. It’s important that the Ramaphosa government returns to the issue, especially from a funding perspective.’

PPPs emerged worldwide as the preferred mechanism for delivering infrastructure in the early 1990s, although they’ve been around a lot longer. Essentially, a PPP is a contract where the private sector agrees to perform a function traditionally provided by government. And, says Preshnee Govender, senior corporate tax manager at KPMG, ‘most of the project risk – technical, financial and operational – is transferred to the private party’.

According to Whyte, PPPs are a critical mechanism for funding infrastructure in SA. ‘We don’t have the tax room to finance public spending on a large scale, collections are down, the deficit is rising – at least for the next couple of years – and we face the sovereign downgrade issue,’ he says. The NDP needs infrastructure investment to rise from 19.5% of GDP (2016) to 30% by 2030 but, as National Treasury’s Budget Review points out, ‘the public sector cannot fund this infrastructure alone’. 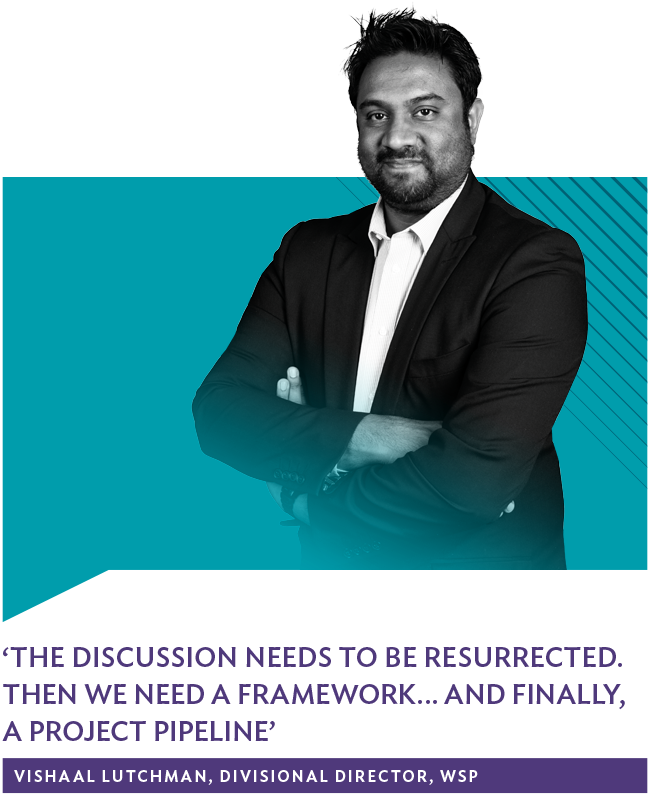 The PPP mechanism was seized on by the SA government in the late 1990s, with the necessary enabling legislation being passed and a unit set up within National Treasury in 2000. Its function was to ‘package projects’ – usually in partnership with the Development Bank of Southern Africa (which established a PPP unit as early as 1996) – and maintain a pipeline of possible deals that the private sector could engage with.

The current limited state of PPPs in SA is illustrated by a list of ‘projects concluded’ provided by the Budget Review. Early projects were often large and significant to the national economy. They include R3 billion-plus national toll roads – the N3 between Durban and Gauteng, and both the east and west sections of the N4 running from the Mozambique border to Botswana, via Gauteng – as well as prisons, hospitals (Nkosi Albert Luthuli, at a cost of R4.5 billion), water concessions and the R31.8 billion Gautrain Rapid Rail Link.

In more recent times, by contrast, the only projects National Treasury lists as having reached financial closure since 2007 are in the office accommodation space. Since 2012, four government departments have had new head offices concessioned at a total value of about R10 billion. This is slightly misleading as the list excludes municipal and provincial PPPs, as well as the renewable energy sector – but it’s hardly indicative of a thriving industry.

A thriving PPP pipeline, however, requires a capacitated government. Govender argues that although the private sector bears significant risk, government must largely drive the process, identifying the needs, setting out the tender process and bidding requirements, and identifying the right private-sector partner.

‘For things to take off, government needs to get its house in order,’ says Whyte. ‘If you don’t get it right, the private sector will hold back, the transactions that get done will lack transparency and you end up with a Sanral-type situation.’ 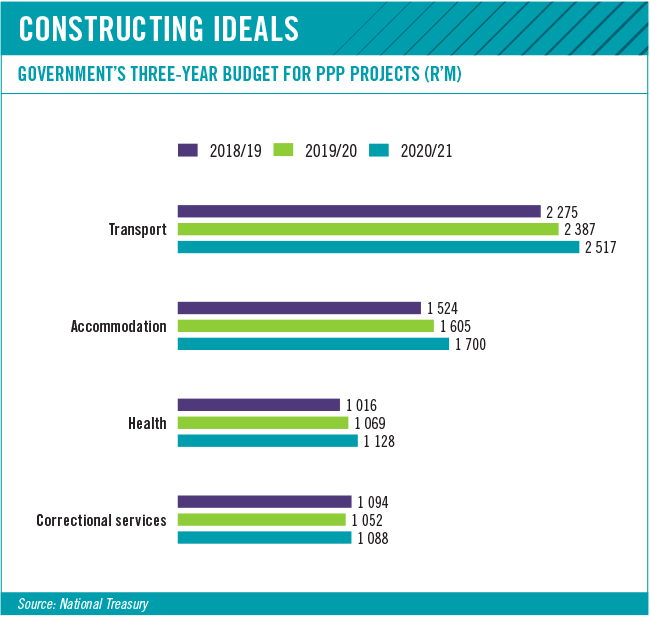 The ‘Sanral situation’ references the Gauteng Freeway Improvement Plan toll roads, a R20 billion project that achieved financial closure in 2007. But users who are required to pay for using the toll roads have mobilised against the project, which has left it in tatters. In 2016, Sanral admitted that user payments were in arrears of more than R7 billion. The former transport minister told Parliament that Sanral was collecting R65 million a month instead of the initially projected R230 million.

However, the Gauteng Freeway project is not the total sum of the problems facing PPPs in SA. ‘Things went wrong when Eskom’s monopoly on generation was left intact after the 2008 blackouts,’ says Vishaal Lutchman, divisional director at consultancy WSP. ‘Medupi and Kusile, or whatever new generation capacity was selected, should have been concessioned out as a PPP.’

This was part of a cumulative weight of negative factors that were to retard the sector. Organised labour had always been opposed to PPPs because the unions believe private-sector involvement will cost jobs. ‘One of the problems for labour is that successful concessions show up public-sector inefficiency,’ says Whyte.

Labour was particularly opposed to two water concession projects – Nelspruit (now Mbombela local municipality) and the Dolphin Coast (now KwaDukuza local municipality) – where the private sector was concessioned to manage and expand municipal water reticulation infrastructure. Although the municipal trade unions claimed a human rights agenda, articulating opposition to what they called the ‘privatisation of water’, ample provision was written into the contracts to supply water to people who could not afford to pay the full economic cost. These two water concessions have in fact turned out to be highly successful. They extended the municipal water supply considerably – in Mbombela’s case to more than 20 000 unserviced households – and without sacrificing jobs. But opposition from labour meant they were not repeated elsewhere.

Lutchman argues that there is currently ‘money at the door, looking for opportunities. The problem is that there just aren’t projects’. The total value of PPP projects in National Treasury’s pipeline for 2018/19 is R5.9 billion, a trivial figure in a national budget of more than R1 trillion. The Budget Review admits that in the three years’ projection – R18.5 billion is only 2.2% of the total public-sector infrastructure budget estimate.

Where might the viable opportunities lie? Lutchman has several suggestions. It’s important to keep pressing on with municipal infrastructure even though these are smaller projects, he notes, arguing that an accumulation of smaller projects is needed to build up momentum and ‘open up the PPP space’ again. ‘South Africa has to come back to toll roads,’ says Lutchman. ‘Even though the Gauteng Freeway project didn’t work, this doesn’t mean the model’s wrong.’ In fact, he adds, there is sufficient technical and manufacturing capacity in SA for the country to ‘put out an e-toll project on its own’. There is no need to bring in foreign partners to provide technology as was done in the Gauteng Freeway case. ‘We already make all these bits and pieces in South Africa – scanners, money collection devices and so on.’

Many of the other opportunities Lutchman likes are in the transport space. ‘In South Africa, we have done Bus Rapid Transit as a state-funded, on-budget programme. In many countries it’s done as a PPP,’ he says. Future projects, including urban light rail transit could be done through PPPs. ‘In the transport space, there’s also the possibility of high-speed trains linking the major urban nodes. Long-distance rail passenger transport is almost non-existent in South Africa. Everyone travels by aircraft.’

Whyte adds that PPPs in education and health should not be forgotten either. ‘These are like municipal infrastructure in that they are relatively small-scale and localised. But they will also build legitimacy for PPPs as they will clearly be seen as meeting a need,’ he says.

Yet before any of this can happen, the Ramaphosa government must get its priorities in order. This means getting government departments aligned, state-owned entities on board and persuading the trade unions of the merits of PPPs. ‘The discussion needs to be resurrected,’ says Lutchman. ‘Then we need a framework – saying where the private sector should be involved and where it shouldn’t – and finally, a project pipeline.’