Speaking at OR Tambo International Airport, before leaving for the 2018 Commonwealth Heads of Government meeting early last year, President Cyril Ramaphosa announced that his Cabinet would aim to raise more than R1 trillion in foreign and local investment in the next five years. Referring then to an investment conference that would take place later that year, the president hinted that the event would generate at least $100 billion in new investments within the mentioned five-year period. ‘Given the current rates of investment, this is an ambitious but realisable target that will provide a significant boost to our economy,’ he said.

As part of getting close to investors, a special envoy was to travel to major financial centres in Asia, the Middle East, Europe and the Americas to meet with potential investors to try convince them to open their wallets, or open them wider than they have been. ‘A major part of their responsibility will be to seek out investors in other parts of Africa, from Nairobi to Lagos, and from Dakar to Cairo,’ said Ramaphosa.

Fast-forward to October 2018 where the much-touted South African Investment conference, attended by some 1 000 local and international investors, delivered a reported combined amount of R290 billion in investments to SA. The main contributions came from Anglo American, the New Development Bank and automotive traders, which invested R71 billion, R29 billion and R40 billion respectively. Locally, Vodacom also announced R50 billion in investments. These investments would have all kinds of positive implications, from creating jobs to igniting local innovation and entrepreneurship, Ramaphosa announced.

‘It’s directly positive for households (wages and training), government (tax and forex, increased competition, and diverse tax base), and positive for some firms selling property, goods and services to the new owner of the “lasting interest”,’ says Zaid Moola, head of client coverage South Africa for Standard Bank. New listings on the equity and debt capital markets, as well as technological benefits through the training of staff and the purchase of modern technology are a few of the indirect benefits, but the longest-lasting benefit is labour productivity. ‘In the end, labour productivity is the one key variable,’ he says. 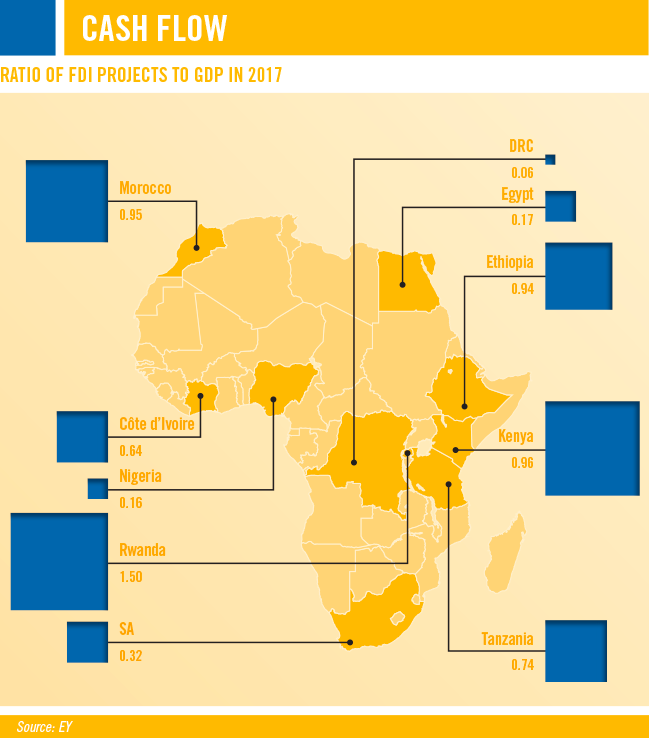 The Global Investment Trends Monitor 2018, published by the UN Conference on Trade and Development (UNCTAD), showed a remarkable recovery of FDI into SA in 2018, from $1.3 billion in 2017 to $7.1 billion in 2018. UNCTAD attributed these staggering, almost unbelievable, numbers to increased investments in the mining, petroleum, food processing, information and communications, and renewable energy industries. And this in a year when global FDI fell by 19%. Egypt was the main attractor of FDI on the African continent in 2018, showing an increase of 7%, up from $7.4 billion in 2017 to $ 7.9 billion in 2018, thanks to its promising real estate, oil and gas exploration, and renewable energy markets.

Moola says market sentiment and policy certainty are key factors in supporting investor appetite, but the opposite also holds true, and many foreign and local investors in 2018 were concerned about the expropriation of land without compensation issue, which must still sit uncomfortably with their promises of investment. ‘One of the key risks now facing SA is the uncertainty around how the proposed reform of Eskom will be managed and, following that, the on-going management of state-owned enterprises and how it affects local non-portfolio assets,’ he says.

Looking back at the nature of FDI over the last few years, there were higher inflows into commodity-related sectors while the commodity cycle was booming before 2011. This then shifted to consumer-facing sectors from 2012 to 2015, when households began to benefit more from the cycle via higher real wages and lower real taxes.

In between, there have been individual FDI transactions that were driven by global themes rather than SA-specific circumstances. ‘It is not often appreciated that FDI into SA is seldom determined directly by circumstances here in SA,’ according to Moola. And this is both a positive and negative. ‘We will attract some FDI into SA even when local policy is poor, but even when SA policy is more attractive, some FDI might not arrive. That is to some extent beyond our control and will depend on the global business cycle and sentiment toward SA by executive management teams,’ he says.

However, this does not absolve us of responsibility. ‘Policy certainty may perhaps be more important for new investors in South Africa,’ says Rajen Pillay, CEO of capital and debt markets at Garuda Capital. ‘However, where investors have been vested in South Africa for some time, policy certainty appears to be less important. Such “old investors” tend to understand the political rhetoric better and still proceed with investments.

Case in point being Nissan’s current R2 billion additional investment, despite the uncertainty of elections and land expropriation rumblings. ‘Market sentiment appears to have more of an effect on portfolio or share investments, and such capital flows become erratic. Bond market withdrawals under such uncertainty have been seen to have major adverse impacts on the currency, which in turn dampens FDI. Hence “irrational market sentiment”, because of its impact on the currency, does damage FDI – despite policy certainty.’

The 2018 FDI Confidence Index, published by consulting firm AT Kearney, and in which not one African country made the list of 25, found that investors viewed the likelihood of a political crisis in an emerging market higher than the year before, ‘which may be contributing to the fact that fewer emerging markets appear on this year’s index’, it notes. ‘And for the second year in a row, investors are prioritising governance factors when choosing where to invest. They are particularly focused on regulatory transparency and corruption, tax rates and ease of payment, and the general security environment.’ Notably, SA made the index listing in 2017 but fell off, along with Thailand and the UAE. 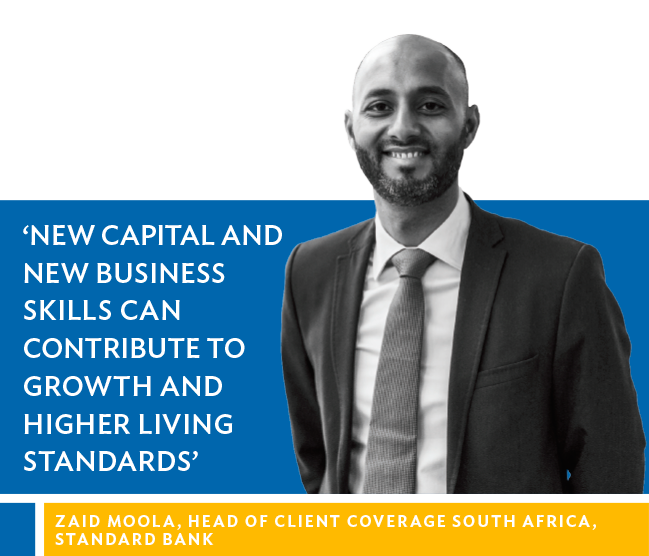 Whereas the UNCTAD report shows dramatic inflow of FDI in 2018, the AT Kearney report showed a decline in confidence in emerging economies, notably also SA. As Courtney Fingar, editor-in-chief of fDi magazine, writes in the Global Greenfield Investment Trends report, ‘capital doesn’t mind so much about politics or rhetoric, but it does care about policy’, which may explain the discrepancy.

Further to this, in the 2018 EY report Turning Tides, EY Africa CEO Ajen Sita says: ‘More than ever before, investors are seeking certainty and clarity around the rules by which they engage with Africa. Pending land reform in South Africa and Namibia, and more broadly across the continent, tax policy and profits repatriation all need to be clearly articulated and practised.’

So, where to from here? Investors have been targeting SA for years and we already have significant stock levels of foreign capital, notes Moola, who says the best way to attract more capital is through, one, improving household buying power and, two, to position SA as a place ‘to manufacture and create’. If we have 16 million households in SA that each buys a fridge or a car every three years, we will have no trouble attracting foreign capital from many parts of the world, says Moola.

When SA households have more disposable income to spend on healthcare and education and travel, interest in SA as an FDI destination will dramatically increase. A strong household sector would be best to attract ‘patient capital’ to SA, he argues, which can come from almost any investment pool. Furthermore, asset managers and pension funds in Asia might be looking for good assets as they grow their own savings systems. ‘This would be in the form of portfolio investments at first, but could grow into direct investment,’ he says.

As for FDI into the rest of the continent, in 2017 the US continued to be Africa’s largest investor, according to EY. US companies launched 130 projects across the continent in 2017, and while focus on Africa under the Trump regime seems to have shifted, the US corporate sector continued to build a presence across the continent. In the same vein, Western Europe pledged €44 billion of sustainable investment for Africa in 2017, a 17% increase in the number of projects after a drop in 2016.

Keeping in mind the EY report was published prior to the major upswing in FDI into SA in 2018, at a time when policy uncertainty in the country was on a knife’s edge, it’s still interesting to note that the authors put Rwanda as Africa’s most successful country in terms of attracting FDI, using the number of projects as the metric. The country’s success is apparently due to its business-friendly environment and consistent, rapid-growth economy.

For example, Rwanda received 1.5 FDI projects for every $1 billion of GDP. Measured on the same criteria, SA received only 0.32 projects, attracting only 20% of what Rwanda did, given its relative size. In a column in the Daily Maverick, Sizwe Mbele, director of strategy at Business Leadership South Africa, questions FDI’s materialising into real economic development, arguing that ‘in contrast to economic theory, the empirical evidence in SA shows that FDI flows at least in the past two decades do not seem to be sufficient to generate overall economic gains and development’.

Moola, however, says new investments lead to better infrastructure, more productive capacity, higher competition and lower prices for consumers. Employment levels, he admits, are hard to forecast, but higher labour productivity in one industry usually has long-term benefits for total employment, he says. ‘South Africa still has many opportunities to use land, people and skills that are currently not being fully utilised.’