When Richard Duffy takes his place as chief executive at Petra Diamonds in April, it will be a validation for CFOs across SA. The appointment of Duffy, who is a former CFO of Anglo Gold Ashanti, follows Mohammed Akoojee’s promotion from CFO to CEO of Imperial Holdings in February.

Both started out as chartered accountants – CA(SA) – and are part of a new breed of finance chief who is stepping out of the backroom to venture beyond core finance responsibilities, assuming hands-on leadership of their organisations. ‘There is significant evidence that CFOs can make great CEOs,’ says Brett Tromp, CFO at Discovery Health and member of the South African Institute of Chartered Accountants.

Market research by the executive search firm Jack Hammer revealed that 17% of CEOs in the JSE Top 40 previously held finance roles. Advaita Naidoo, COO of Jack Hammer, says: ‘This suggests that CFOs aren’t just number crunchers, but that they’re often strong strategic business leaders.’ The US headhunting firm Korn Ferry revealed a similar picture in its 2015 analysis of the global Forbes 2000 companies, where 13% of sitting CEOs had been promoted from a CFO position.

So while the transition from finance chief to chief executive can be a successful one, it’s not (yet) a common route for reaching the top job. In the past, finance experts were perceived as having too narrow a focus on financial topics and not enough outside experience, while often also lacking a broader vision and leadership skills. However, a closer look at today’s CFO landscape shows that their mandate and role has changed dramatically. And its complexity and significance within the C-suite is set to evolve even further. 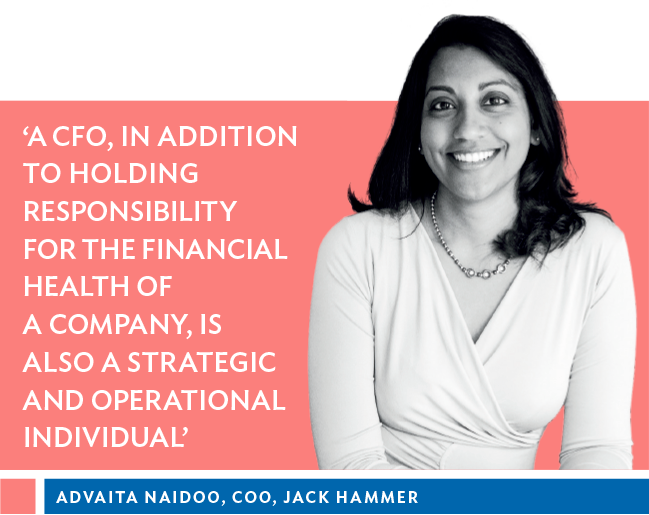 Traditionally, the CFO is the senior executive who manages the financial actions of a company. According to Investopedia, the duties – similar to those of a treasurer or controller – include tracking cash flow and financial planning as well as analysing the company’s financial strengths and weaknesses and proposing corrective actions. More recently, the role has emerged from focusing on compliance and quality control to business planning and process changes, it says, adding: ‘The CFO is a strategic partner to the CEO and plays a vital role in influencing company strategy.’

Naidoo’s description goes in the same direction: ‘A CFO, in addition to holding responsibility for the financial health of a company, is also a strategic and operational individual, often seen as the second in command [2iC] to the CEO. ‘Although it’s not a statutory requirement for a CFO to sit on a company’s board, most companies do reserve a seat for the finance executive,’ she says. ‘More and more, companies are looking for commercial CFOs – individuals who not only do financial reporting but have insight into how to grow business, sustainably and ethically.’ Meanwhile Tromp explains why the role has evolved. ‘With diverse economic conditions, highly regulated industries and increased business risks, the role of finance has become more present throughout businesses and it influences all parts of the business.’ He adds: ‘I have heard the saying from “bean counters to the boardroom”. This sums up the CFO of today – they need to manage the numbers well but at the same time add value strategically in the boardroom.’

‘In the past CFOs were expected to only limit their role to finance, costs and profitability related topics,’ says Alfred Ramosedi, chairman of Accounting Technicians South Africa. ‘Today, the CFO is expected to be at the core of what happens in the business. There [are] myriad issues that companies want them to be involved in. They are expected to understand the market; the risks of the business; how the internal processes work, and so on. Most importantly, they need to help the business navigate the regulatory and standards-setting environment, and work with the CEO to craft the strategy of the company.’

The relationship between the chief executive and their 2iC has been described as the CEO being the ‘vision’ of the organisation and the CFO its ‘conscience’. This comes with the territory, seeing that the CFO serves as the custodian or steward of an organisation’s assets. As such he or she heavily relies on facts and figures and past performance for accurate reporting and decision-making, with a mindset that is typically rule-driven and fact-based, governed by statutory reporting, accounting standards and regulatory compliance. As the ‘conscience’ of their organisation, CFOs must be meticulous about governance, ethics and transparency. ‘Shareholders have delegated responsibility to the management of the company and the CFO is often the person they trust most to ensure that their investment is well taken care of,’ says Tromp.

‘Stakeholders don’t only require financial governance but … governance around non-financial measures as well. There are many moving parts in today’s complex governance environment and the CFO needs to ensure that adequate time and resources are allocated to each part, ensuring that governance is strictly adhered to and that all stakeholders feel comfortable with the business.’ He says that the CFO/CEO relationship ideally is ‘a hand-in-glove’ one, adding: ‘There needs to be total trust between them to work together and navigate the complex operating environment, while remaining independent enough to say “no” to each other and hold each other accountable.’ 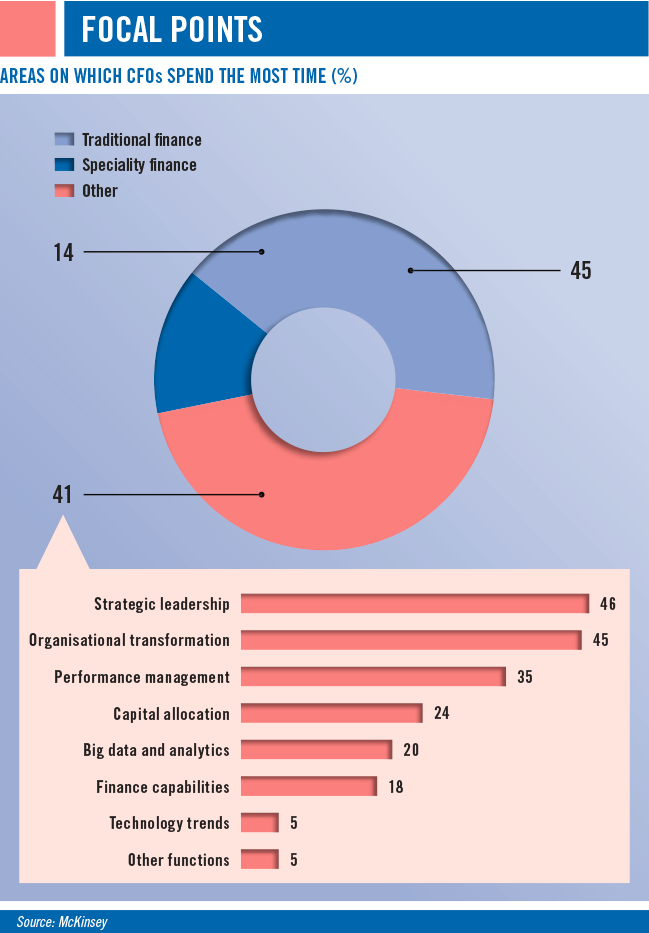 The growing role of CFOs as trusted advisers is strengthened by their ability to provide the financial data and analytics necessary to drive the business forward. As a result of rapid advancements in technology, many of the traditional finance and reporting functions – the pure data crunching – have been automated, freeing up the financial leaders to analyse big data, reconfigure finance processes and provide business insights.

The CFO should be involved in all business decisions, operating ‘in tandem’ with the CEO, says Naidoo. ‘From the point of view that “data is the new gold”, any executive who has the ability to harness insights and drive strategy based on these insights will be the difference between a company’s failure and success. With strong technical capability and a penchant for analytics, CFOs are well placed to do this,’ she says. ‘While the CEO is expected to be the more creative one, the CFO needs to be conservative, analysing the vision of the CEO and its financial viability and feasibility,’ says Melani du Toit, senior accountant at Tax Consulting South Africa.

She emphasises that CFOs need to be held accountable for their actions, as the financial function of the company rests with them and remains their responsibility. ‘In the old days they referred to the CFO as the one who holds the strings to the purse. Currently, we know of examples of where traditional CFO functions are being outsourced to larger audit firms – with which we have a problem, as even the perception of conflict of interest is something that should be more important than earning fees. Each executive has a place and role to maintain the balance and to ensure accountability is enforced,’ she says. ‘By merging the CFO’s role with other “C” roles – given the additional available time due to outsourcing – this may very well create unbalance, and the line of accountability becomes fuzzy.’

In the digital asset space it is crucial for the CFO to stay on top of developments and continuously seek out strategic initiatives, says Kyle Cox, senior analyst at Invictus Capital, a cryptocurrency investment firm. ‘Revenue streams can often dry up very quickly as the market moves to new technology. In our business, we have seen the rapid decline of initial coin offering activity, which was an important revenue driver through our raise technology. As a result we have had to quickly adapt to new areas, such as security tokens, and explore and trail blaze themes such as real estate tokenisation. ‘Due to the emergent nature of many of these technologies, collaboration with experts across many different fields is a key ingredient to any CFO’s and the respective business’ success in the short and long term.’

It remains to be seen whether SA’s financial leaders can live up to the radical overhaul of their job requirements. On top of the necessary financial expertise, they must be agile and tech-savvy, with a deep understanding of their organisation and industry. In short, the CFO of the future will be a financial all-rounder who can help take the business to the next level – ethically and sustainably.