Fourteen years ago, a journalist from Wired magazine sat down with Nathan Wolfe, an American virologist who had just started forming a network of research outposts around the world in virus hotspots, to better understand what he called the ‘viral chatter’ in these places.

The diseases under the microscope were potential epidemic starters, every one originating in animals: HIV in Cameroon, which likely passed from chimpanzees to local hunters; human outbreaks of monkeypox in the DRC; the Nipah virus in Malaysia; and SARS-CoV in China, which was thought to have crossed over from bats to humans in 2002. Scientists refer to these types of viruses as zoonoses.

‘The analyses of the published genetic sequences further suggest that the spillover from an animal source to humans happened during the last quarter of 2019.’ A zoonosis, in other words, that has led to the global pandemic we are currently experiencing; what Wolfe referred to in his 2006 interview with Wired as ‘the 100-year thing’.

Wolfe was among thousands of scientists who for years had been raising the alarm of a potential repeat of past global outbreaks such as the 1918 flu pandemic, but he was unique in that his company, Metabiota, which specialises in global pandemic tracking, had partnered with reinsurer Munich Re and brokerage Marsh to develop a policy specifically to cover large companies against pandemics. Business-interruption (BI) insurance with a pandemic twist. This was in 2015, four years before the first sign of SARS-CoV-2, or COVID-19. ‘We enabled the first business-disruption insurance for pandemics. But nobody bought it,’ Wolfe told Wired in 2020.

When you speak to insurers, the general consensus is that COVID-19, in particular the ensuing lockdown and the crippling effects thereof, were – and still are – uninsurable.

Munich Re managed to sidestep the financial hurdles of insuring a ‘100-year-thing’ through what Wolfe refers to as a bit of ‘financial alchemy’, by passing on the payout risk to institutional investors, such as pension funds, who would receive regular premiums in exchange for carrying a chunk of the risk. This policy was later sold by Marsh under the name PathogenRX. Each would be tailored to a client but most would work on a parametric basis, meaning that a predetermined amount would be automatically paid once the epidemic reached thresholds as set out in the policy. 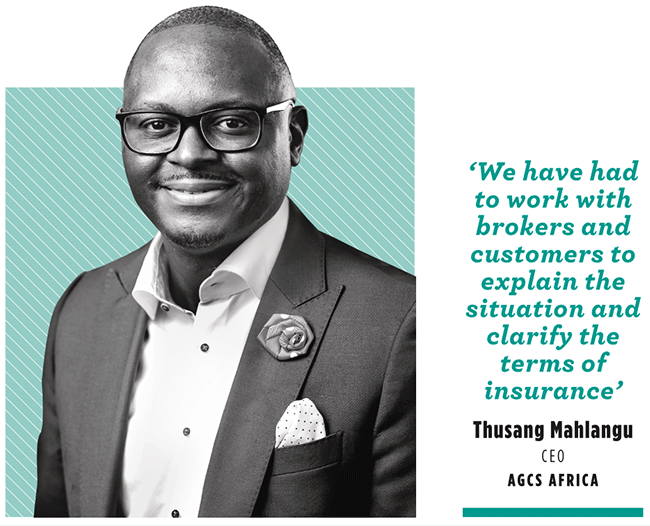 The epidemic risk solutions team at Munich Re continues to provide capacity for public institutions and private-sector businesses, such as hospitality, retail, mining, manufacturing and construction. Products cover specific risks associated with epidemics, including business interruption and temporary site closure.

‘Based on our own proprietary models for the purpose of modelling pandemic and epidemic exposure, supplemented with data sets provided by external providers, we have created a range of innovative tailor-made risk-transfer solutions for all lines of business covering epidemic risks,’ says Gunther Kraut, head of Munich Re’s epidemic risk solutions team.

In SA, insurers initially refused to pay BI-cover claims, coming mainly from the tourism and hospitality industry, on the grounds of a difference in the interpretation of policy exclusions. Local insurers were not unique in taking this stance. Many insurers globally exclude pandemics and related exposures from policies, says Robert Shaddock, head of corporate and business insurance at Standard Bank Insurance.

Most insurers argued that the business interruption that occurred during lockdown was the result of a national lockdown and therefore falls outside the scope of the cover provided by the infectious-disease extension, explains Shaddock.

Santam was one such insurer, first refusing to pay but later agreeing to make available R1 billion to policyholders who had a contingent business interruption (CBI) extension in their policy. ‘This relief payment does not impact the insurer’s efforts to obtain legal clarity on its policy interpretation through the courts,’ the company announced, but group CEO Lizé Lambrechts explained that the court cases may be lengthy and the company recognised their clients’ plight.

‘We hold a firm view that our CBI policy wording is very specific and only covers businesses for interruptions as a result of the outbreak of a disease at a local level, or within a specified radius,’ said Lambrechts. Because of the difference of opinions in the interpretation of CBI cover, it was in the best interest of all parties to obtain legal certainty from the courts, she added. ‘The resolution of this matter will without doubt have a significant and lasting impact on the entire insurance industry.’

Peter Olyott, CEO of Indwe Risk Services, explains that where BI cover was extended to include ‘notifiable disease’, it was clearly subject to the disease occurring ‘on the premises’. Certain extensions also included a ‘within a radius of 50 km’ clause, for example, and linked the disease to the closure of the business ‘by order of government’.

Insurers maintain it was never their intention to cover a national total lockdown scenario. ‘We don’t doubt this; however, in some cases insurers have put out policy wordings that do not make this clear. It comes down to what the policy says, or appears to say, at face value,’ says Olyott.

‘The more complex insurance principle of proximate cause has generally been ignored in the public debate. The confusion between insurers and policyholders is around intention and legal principle on the one hand, versus what the wording appears to cover at face value on the other,’ he says.

Thusang Mahlangu, CEO of Allianz Global Corporate and Specialty (AGCS) Africa, says that they received thousands of claim notifications for business-interruption losses related to COVID-19, mostly in the mid-sized corporate market. However, the vast majority of commercial property policies do not cover business interruption without physical damage. 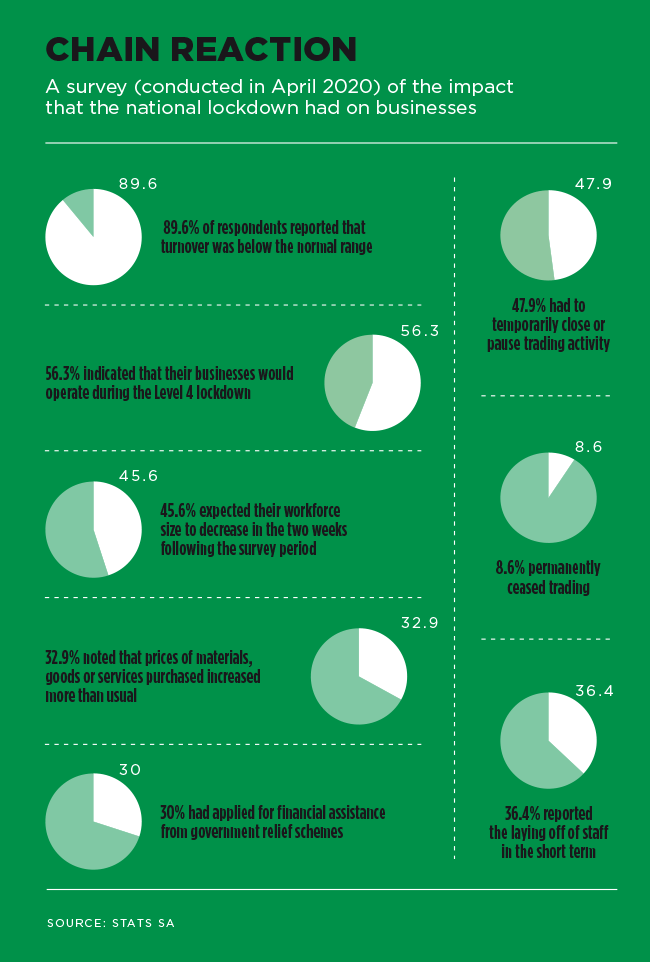 ‘Property insurance is intended to cover physical damage, and non-damage business interruption caused by COVID-19 would not typically be insured,’ says Mahlangu. ‘We have had to work with brokers and customers to explain the situation and clarify the terms of insurance.’ There are exceptions, such as entertainment insurance and a small number of property policies that include non-damage cover for infectious diseases. ‘Many of these have already been settled,’ he says. ‘It is unlikely that the insurance markets will be able to cover every eventuality, and certainly not at the scale of a global pandemic,’ says Shaddock. ‘In the event that such policies do come onto the market, businesses should read through all the provisions included under the cover.’

In its white paper on COVID-19, Supporting Global Recovery and Resilience for Customers and Economies, Lloyd’s says the global insurance industry can work collaboratively to design and develop new products, services and structures, but that to overcome the challenges of offering protection for systemic risks at scale, it must also work with governments to combine (re)insurance capital with capital-markets resources and sovereign funds to provide the necessary security and capacity to pay claims – much in the same way that Munich Re and Marsh did when they designed their pandemic risk insurance.

‘In some countries, the threat of a second wave could make new COVID-19 business interruption cover unaffordable for customers or loss-making for insurers. These will require new solutions because cover does not currently exist,’ says Lloyd’s.

It is no coincidence that Wolfe’s company Metabiota is working with Lloyd’s in their search for answers in insurance. The group has proposed a potential new insurance solution to the Lloyd’s market, called ReStart. The policy would offer business coverage for future waves of COVID-19 by pooling capacity from several Lloyd’s market participants. It would initially be aimed at smaller businesses, potentially expanding across a broader range of SMEs and mid-market over time. The product will manage affordability and insurers’ exposure through risk pooling, variable limits and industry or geographical diversification.

Can the effect of the virus be separated from the effect of the lockdown, in the context of the BI insurance debate? The demand for ‘treating customers fairly’, an outcomes-based regulatory and supervisory approach, may be the deciding factor in this scenario, but legal clarity will avoid any future uncertainty, according to Olyott. ‘COVID-19 is a truly global event. It is thus arguably beyond the capacity of the commercial insurance market, because it goes beyond the basic principle of insurance whereby the losses of the few are carried by the contributions of the many,’ he says.

Because of this, it will likely be considered uninsurable, ‘at least as regards risk transfer via traditional insurance products’. Olyott adds that this may give rise to alternative solutions as with many other fundamental risks in the past, such as nuclear risks, war risks, and riot and strike risks. ‘It is feasible that the only pragmatic solution would be to offer some financial protection through a central insurance pool.’

In an op-ed for Time, Wolfe writes that this ‘will not be the last pandemic in our deeply inter-connected world, and sadly it won’t be the worst. Two profoundly different possible futures are available to us: one in which we stick our heads in the sand as we have consistently done, and one where humanity takes the hard, necessary steps to protect itself’.