The Italian Peninsula extends from the southern Alps in the north to the central Mediterranean Sea in the south. It is nicknamed lo Stivale, the Boot, because of its shape. Italian products in SA usually have an air of sophistication about them – Smeg, Ferrari, Italtile – but machinery, consumables and pharmaceuticals have been the true drivers of trade and investment between the two nations.

Italian machinery for household, office and factory use continues to be at the centre of SA’s appetite for Italian goods, with a large import of Italian petroleum also having arrived in July, says Dylan Stewart, communications manager at the Italian-South African Chamber of Trade and Industry (ItalChamSA). Goods going from SA to Italy in high volumes include fruit and nuts, iron and steel, and seafood.

SA is a mature market that can be used as a springboard into the region, notes Stewart. ‘The possibilities of either producing in SA or at least using it as a node for assembly, distribution or regional managerial headquarters are often the motivations for companies looking to establish a foothold in both the local market and the broader SADC region,’ he says. Access to the established banking and business sector in the country is a drawcard for investors looking to enter Africa.

Whereas certain markets have been historically monopolistic or oligopolistic, the SA market remains ripe for disruptors, as was the case with Ariston Thermo, trading in SA as Heat Tech Geysers. The Italian company Lucchini and its success with local locomotive SOEs has also highlighted the importance of being a first mover in an emerging market. ‘Their ability to meet local content requirements indicates the potential fruit that can be born from making bold, job-creating investments in SA,’ says Stewart.

Italian and SA trade and investment consists of more than fast cars, says Lorenzo Tencati, entrepreneur and senior partner of Singular Group, a global management-consulting firm focused on emerging markets. Along with machinery, consumables and vehicles make up a big part of exports into SA.

In 2013, Italian automaker Fiat and its majority-owned US subsidiary Chrysler opened a 19 000 m2 Mopar facility in Pretoria, with planned distribution of more than 50 000 part types to 80 delivery points in SA, Botswana and Namibia, at the time. Mopar is the service, parts and customer-care brand for Chrysler and Fiat. 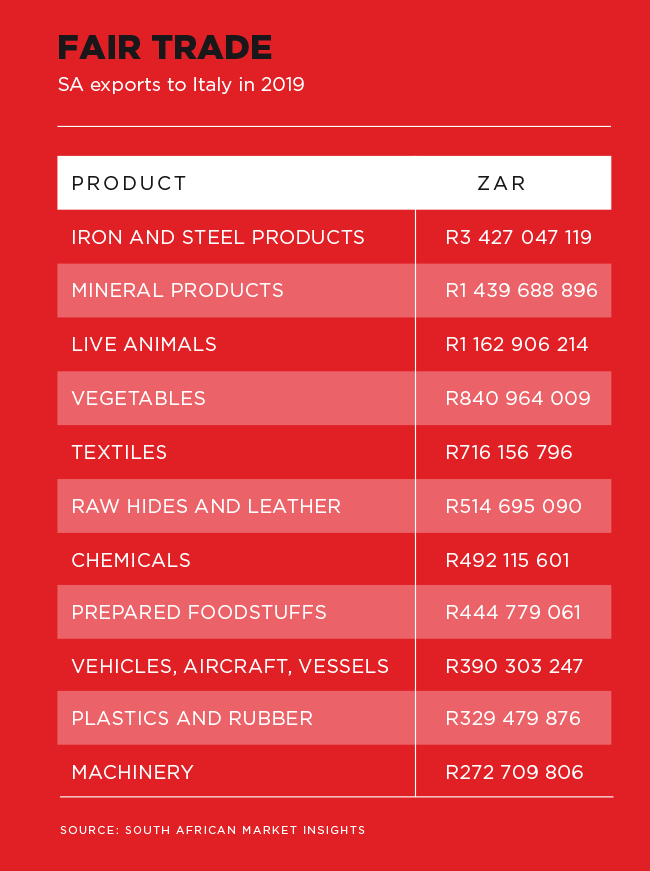 ‘We will strategically grow our parts distribution network in order to support our brands and customers in the marketplace,’ said Mopar CEO Pietro Gorlier. ‘Our new parts distribution centre will further improve service to our dealers, distributors and customers in this region. We will continue to look for opportunities to support our growth.’ The SA Mopar facility supports the Abarth, Alfa Romeo, Chrysler, Dodge, Fiat, Fiat Professional, Jeep and SRT makes.

Stewart says that renewable energy is a burgeoning industry that Italian investors are keeping a close eye on. ‘There are Italian companies waiting for the right policy to make bids to invest in renewables.’

In 2019, Italy’s Enel Spa, through its SA renewables arm, Enel Green Power RSA, initiated construction of two 140 MW wind farms in the Northern Cape. The twin projects, Karusa and Soetwater, to be completed by the end of 2021, each received a €200 million investment. Once in operation, they will supply electricity to Eskom under a 20-year power purchase agreement.

With the launch of Karusa and Soetwater, Enel was building 700 MW of wind capacity across five active construction sites in SA. Other wind projects include Nxuba and Oyster Bay. The Italian company secured the five projects in Round 4 of the SA government’s Renewable Energy Independent Power Producer Procurement programme.

‘This robust pipeline of projects under construction comes on top of the major portfolio of wind and solar assets that we have already commissioned thanks to the determination and commitment with which we have worked in South Africa since we first started our development activities in the country, back in 2011,’ says Antonio Cammisecra, CEO of Enel Green Power. ‘Looking ahead, we are committed to further leverage on the wealth of renewable-energy resources in this country, so we can continue to contribute to its sustainable development and to create shared value for our South African stakeholders.’

In 2017, ItalChamSA noted that Italian companies were increasingly leading industries related to environment-conscious solutions, renewable energy being one. ‘The growing difficulty in gaining a business visa and a lack of certainty regarding the focus areas for future government expenditure make it imperative for Italian companies trying to enter South Africa to have a local partner and we are proud to assist in this regard,’ it told Engineering News. 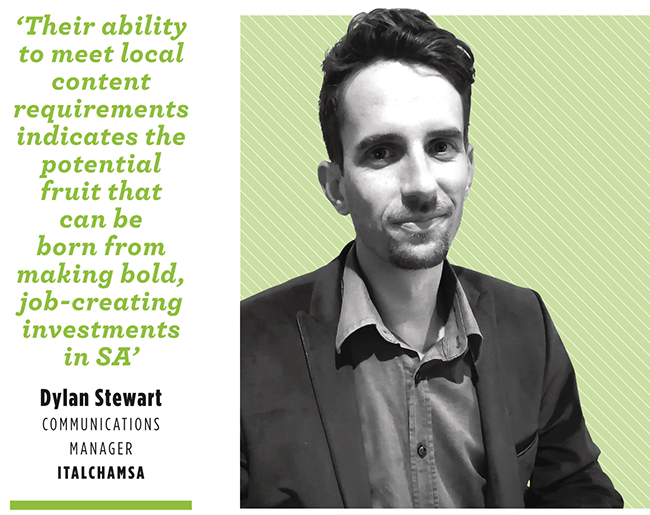 ‘Europe is still the biggest investor in Africa in general. The EU are the real friends of Africa and South Africa, as compared to BRICS, and the Southern Africa Europe Dialogue is an event where CEOs can better understand what is happening in the African region from a more informed perspective in order to influence their business strategies and to understand where there are areas of collaboration between Europe and African businesses,’ he said. ‘It is the most important platform for any European businesses looking to invest in Africa.’

EY’s 2020 paper, FinTech Waves, indicates the fintech industry is gaining momentum in Italy. For example, in 2011 there were 16 start-ups, 199 in 2015 and 345 in 2019. ‘The quick recent growth of the Italian fintech ecosystem should put it on the radar of investors who wish to get the best opportunities early. Entrepreneurs with experience and track records are attracting talents, and it is just a matter of time for investments to follow,’ says Alessandro Longoni, head of Fintech District, in the paper. EY says the market remains heterogeneous, small in size but with high potential.

Tencati says investors continue to be wary of the current uncertainty in the SA market, which includes worries about policy, about politicians dealing with corruption and about the ease of doing business, but ‘the world is on the lookout for signals that SA [will be] a stable environment’ in the future.

Stewart agrees. ‘Policy uncertainty is without a doubt the most significant barrier to investment,’ he says. ‘This comes from two sources. One is around actual lack of certainty about ongoing political debates, such as the one about land reform, which have unknown outcomes. The other has to do with a lack of clear and simple communication about laws and incentives. In these instances the uncertainty is as a result of unknowns owing to obscure messaging or a complete lack of it through effective channels.’

To set aside the ever-present elephant in the room, COVID-19 has dampened trade between the two nations. Yet despite the pandemic, Italy-South Africa trade has maintained some respectability during 2020, Stewart notes, registering close to $1.4 billion worth of goods exchanged between the two countries since January, and it is expected to end somewhere between $1.6 billion and $1.8 billion. The bulk of this trade is on the side of imports into SA, registering $1.1 billion to date in 2020, compared with $2.2 billion worth of Italian imports in 2019.

‘We are still waiting for more evidence to emerge but we do know that trade between Italy and South Africa has been negatively affected by the travel ban, the restriction on local business activity and the quarantining of certain goods imported into the country,’ says Stewart. ‘Trade fairs and delegations were put on hold, which has stunted potential deals.’

There were hints of recovery showing up in the SA-Italy trade volumes during July and August, the latter having registered the highest level of Italian imports this year so far at about $160 million, according to SARS. The second quarter of the year was particularly slow in terms of Italian imports into SA which registered $350 million worth of trade. But, says Stewart, ‘Italy alone remained a major trading partner for South Africa, even during these tough times, ranking ninth in the world for total value of imports during the second quarter’.