With great corporate power comes great responsibility, and SA has a legal tool to keep directors on the straight and narrow and to punish those who abuse that power. This tool comes in the shape of the delinquency provisions in the Companies Act and is a crucial remedy against misconduct by directors in both the public and private sectors. When applied correctly – and early enough – the tool has the potential to stop and remove corrupt directors before their behaviour escalates into corporate failure.

‘What we have seen recently is that these delinquency provisions are increasingly being used to hold directors to account for misconduct,’ says Parmi Natesan, CEO of the Institute of Directors in South Africa (IoDSA). ‘Directors must take note of this, because the penalties are extremely severe.’

According to Rehana Cassim, associate professor and subject head of corporate law at Unisa, ‘the newly adopted delinquency order sets out to raise standards of good behaviour expected of directors. It also protects the public from incompetent and dishonest directors’.

In terms of Section 162(2) of the Companies Act, a shareholder, fellow director, company secretary, prescribed officer, or a trade union or employee representative may apply for a director to be declared delinquent. One should note that creditors don’t have the right to bring delinquency proceedings. The person against whom the application is made must be a current director of the company or have held this position within 24 months of the application being lodged.

‘This is a powerful implement in the hands of workers,’ says Matodzi Ratshimbilani, director at Sandhurst-based firm Tshisevhe Gwina Ratshimbilani Attorneys. ‘Properly used, this provision can see workers permanently force directors out of boards if they fail to discharge their duties.

‘There are many cases where shareholders have applied for directors to be declared delinquent. The latest Old Mutual legal battle with Peter Moyo and the board may be the most highly publicised one where an employee applies for his directors to be declared delinquent,’ he says. ‘But as far as I’m aware, employees have not really utilised this tool against their directors, except to the extent that there may be cases that are not yet reported.’

While SA employees are still under-utilising their rights in this respect, the list of those who may apply to court to declare a director delinquent has recently been widened.

‘As long as a person can prove that they meet the requirement of acting in the public interest, they would have a legal standing to bring such an application,’ says Cassim. A judgement from 12 December 2019 granted the non-profit Organisation Undoing Tax Abuse (OUTA) the right to bring a delinquency application against Dudu Myeni, former CEO of SAA. ‘The court held that OUTA did have legal standing to bring the application against Myeni in the public interest, because OUTA represents taxpayers, who partly foot the bill of SAA through paying their taxes and therefore have an interest in how a company like SAA is run,’ she says.

The procedure of having a director declared delinquent is quite straightforward. ‘All that has to be done is that a person with legal standing must serve and file an application to court to declare the director delinquent,’ says Cassim. ‘No preliminary steps are required before the application is served and filed in court. 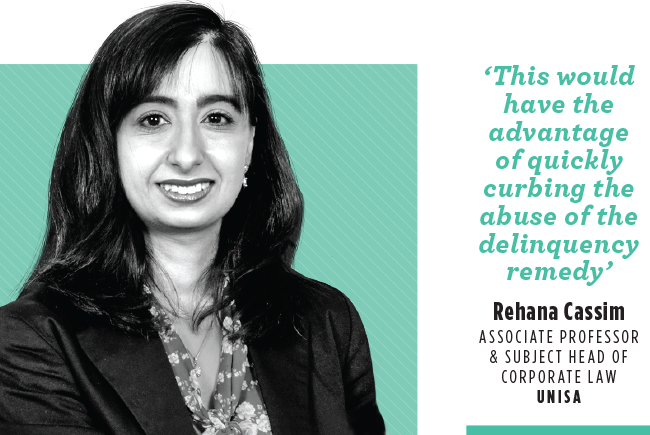 ‘Normal court proceedings would follow in that the director would be given a chance to respond to the allegations made against him or her. Once the application is filed in court, it becomes a public document and may be accessed by the public.’

The IoDSA’s Natesan underlines that it takes money, time and energy to put such a case together. ‘I don’t think it should just be easy though, as that may not be fair to the individuals concerned. Like any other legal process there needs to be a fair procedure,’ she says.

The key purpose in declaring a director delinquent is ‘to prevent a person guilty of conduct that is harmful to the company and is inimical to the position of a director, from acting as a director of the company or any other company’, according to Michael Gradidge, an executive in ENSafrica’s dispute resolution department.

Brent Botha, director at Norton Rose Fulbright (NRF), adds that in order to be declared delinquent, a director needs to be found guilty of ‘serious misconduct’, which is distinguishable from ‘trivial misdemeanours’.

He explains that the delinquency provisions in the Companies Act envision relief for situations in which ‘directors have, for example, taken personal advantage of information, or exploit, for personal gain, a business opportunity intended for the company. Or where a director has intentionally, or by gross negligence, inflicted harm on the company or a subsidiary. In other words, substantive abuses of office’.

Botha’s NRF colleague, candidate attorney Kala Ilanga, adds that ‘a natural person must also be declared delinquent if he/she has consented to serve as a director in circumstances where he/she was either ineligible or disqualified’.

‘Of course, proving the offences will turn on the facts. Delinquency is a drastic measure, and I believe the courts will only do so where there is clear evidence of misconduct,’ he says. ‘Please bear in mind that in terms of Section 162, the remedy is not only full delinquency, which means ineligibility for life or a long time, directors can also be put on probation, which is less severe than full-on delinquency. The severity of the offence will determine the length of delinquency.’ 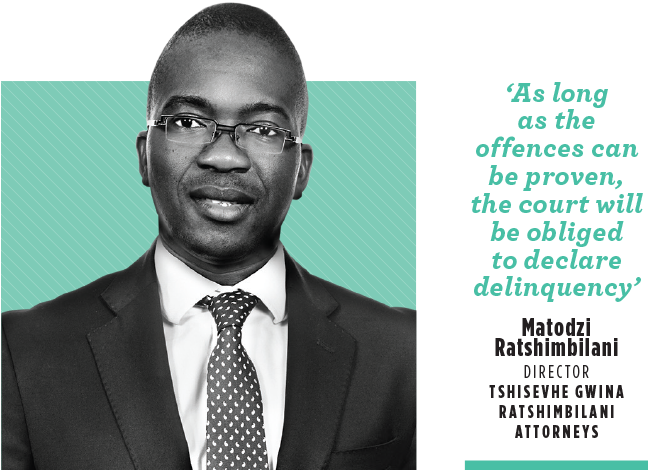 The Companies and Intellectual Property Commission (CIPC) is supposed to maintain a public register of persons who are disqualified from serving as a director. Accordingly, it should be notified of any declaration of delinquency in SA, says Gradidge. ‘However, at present there is no register of delinquent directors on CIPC’s website.’

It’s also worth noting that a delinquency order does not translate into a criminal record or jail sentence. But the reputational damage can be career destroying. That’s why Cassim calls for safeguards or filters to protect against abuse. ‘We don’t need harsher legislation, but there is nothing to stop a single, disgruntled director or shareholder from bringing proceedings to declare directors delinquent,’ she says. ‘There is also potential for a trade union or employee representative to put directors under pressure by exercising the right to bring delinquency proceedings, or threatening to do so.

‘One safeguard would be to permit delinquency proceedings to be brought derivatively – that is, in the company’s name. A derivative action allows a person to bring an action on behalf of a company to protect the company’s legal interests from parties allegedly causing harm to the company.

‘The derivative procedures have a good-faith requirement. Thus, the court would be able to screen out, at an early stage, any frivolous or vexatious proceedings,’ according to Cassim. ‘This would have the advantage of quickly curbing the abuse of the delinquency remedy.’

She explains that another advantage of a derivative application would be financial: a company is generally better positioned than an individual applicant to carry the high costs and expenses of protracted legal proceedings.

Ratshimbilani and Cassim both caution that the delinquency remedy must be used responsibly to avoid it being misused by directors settling scores among themselves or by trade unions and employee representatives as a threat to unduly put directors under pressure.

‘On the other hand, I think that granting employee representatives the right to have directors declared delinquent would improve corporate governance standards in companies and make directors more accountable,’ says Cassim.

There’s also the added element of public shaming, which Ratshimbilani believes will serve as a deterrent. ‘I have had many clients who are directors who get quite concerned when something is done that may lead them to delinquency,’ he says. ‘I believe it is an important tool to keep directors honest.’

This should put our public and private companies on a better trajectory. So while the delinquency provisions in the Companies Act may still require some fine-tuning, there is hope that for now they are keeping our corporate leaders on the straight and narrow, helping them lead SA’s economy towards a better future.