Data from the Reserve Bank’s Quarterly Bulletin shows that the US was the fourth-largest contributor of FDI in SA in 2017, investing R129 billion (the UK was the largest, followed by the Netherlands and Belgium). Into the continent, the US is Africa’s largest investor. US companies launched 130 projects in 2017 versus 91 in 2016. ‘US corporates still appear keen to expand their interests in Africa, despite the US government’s focus shifting away from Africa, following the inauguration of Donald Trump,’ says Sanisha Packirisamy, economist at Momentum Investments.

Some challenges aside, the US continues to inject money into SA, across sectors. ‘The office of the United States Trade Representative reported that US investment in SA rose to $7.3 billion in 2017 – a 10.1% increase from 2016 – with investments primarily in manufacturing, professional, scientific and technical services, as well as wholesale trade,’ says Packirisamy.

Late last year, at President Cyril Ramaphosa’s Investment Summit, at least 20 companies from around the world pledged to invest more than R130 billion in South Africa. Included among these was global fast-food behemoth McDonald’s, which said it will spend R3 billion on SA expansion over the same time period. In the past decade, one of the most significant entrances into SA by a US company involved Walmart’s merger with Massmart Holdings, the US company having spent $2.4 billion on a 51% stake. Doug McMillon, then CEO of Walmart International, now CEO of Walmart Inc, said at the time that the retail giant intended to accelerate its presence with expansion into SA and surrounding countries because of the attractive growth potential.

‘In terms of overall investment into South Africa, in Momentum Investments’ opinion, the decision to withdraw the Minerals and Petroleum Amendment Bill will instil confidence in the oil and gas industry,’ says Packirisamy. ‘Moreover, SA’s ranking on the Fraser Institute’s Annual Survey of Mining Companies improved to 43rd out of the 83 jurisdictions surveyed in 2018, relative to 48th out of 91 in 2017. Further regulatory clarity and economic stability should allow SA to improve on the policy perceptions index in time, thus improving the outlook for inward investment. In addition, plans for the independent power producer [IPP] Bid Window 5 bode well for investment in renewable energy projects.’ 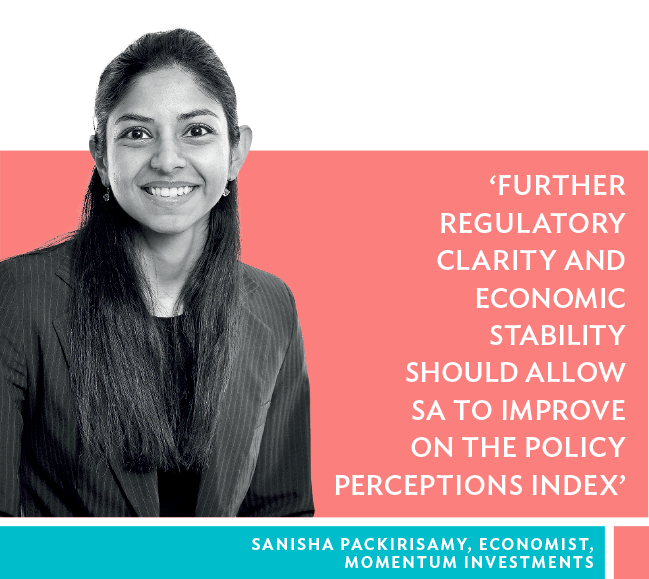 Christie Viljoen, economist at PwC’s Strategy&, says SA has been suffering from a decline in foreign investment for some time now and that there is thus an appetite for foreign money, which favours the investor. ‘The US could facilitate that,’ he says. The sectors that have traditionally been the most popular for US companies to invest in, he adds, are the obvious retail brands, fast-food outlets and shops. Viljoen notes, however, that because the US is one of SA’s biggest foreign investors, ‘hundreds of thousands of jobs in South Africa are linked to US companies or companies that have US ownership’. With regards to where potential for further investment lies, he singles out financial services. ‘Apart from growth and consistency from a GDP perspective, this is a sector that keeps on growing. It involves high-quality companies; companies with strong leadership built up over many years from very small to now very large,’ he says.

According to Packirisamy, the former economic counsellor for the US embassy believed that there were untapped investment opportunities in SA in energy; logistics; agro-processing; pharmaceuticals; advanced manufacturing; renewable energy; energy storage; chemicals; and ICT. ‘He noted that the US views SA’s future as being in knowledge-economy-type sectors,’ she says.

Stephen Kennedy-Good, a director at Norton Rose Fulbright, agrees that SA is still an attractive destination for US investors. ‘South Africa has a very well-established regulatory environment. The laws work well and are understood by foreigners. Also, the market here is sophisticated. I’ve always found that foreign investors like coming to South Africa as we’ve got infrastructure that works well. We’ve also got regulators that work well.’ Foreign investors use the country as a springboard into the rest of the continent, too, he says. ‘South Africa alone is worth pursuing from a market perspective but foreign companies, depending on what sector they are involved in, look from here at other countries in Africa where there are opportunities.’

Viljoen shares a similar view. ‘If you want a company to invest in South Africa, you need that company to have a diverse market outside our borders. We see this on the JSE. So many of the revenues come from outside of South Africa. You can’t do it only on the promise of the South African economy. It would have to be a company that has the potential for growth outside of the country. ‘You not only need it to compensate for slow growth locally, you also need the diversity in the portfolio – in short, a South African company that is international.’

There is also great potential for SA companies to invest in the US. ‘South Africa’s investment in the US rose 37.9% to $4.1 billion in 2017 and was mostly led by wholesale trade and information services,’ says Packirisamy. She cites its efficient financial markets, strong institutions and corporate governance as reasons why the US is so attractive for SA investors. Viljoen adds: ‘They have a large population that is very wealthy by African standards, which makes the market very big and potentially lucrative. Consumer taste is well developed, and people are brand aware. Currently, the country’s economic growth is also healthier than South Africa’s, and unemployment is lower. There’s a lot of opportunity for growth.’

Viljoen names the financial services sector as one area where SA companies have succeeded in the US – and further afield – and where the most growth potential lies. ‘It’s pertinent to consider which South African sectors would be interested in going into developed economies,’ he says. ‘One that stands out for me as logical is financial services and insurance. Some financial groups like Investec, Discovery and Old Mutual already have significant linkages to developed economies. Financial institutions on this side use up-to-date technology and are very innovative and creative with products, and that makes sense to me. I’m hesitant to say fintech… That’s cutting-edge but I don’t know if it’s impossible. Our fintech finds opportunities in developing economies, but perhaps not yet developed economies.’

Several smaller ICT companies are also gaining a foothold on American soil – among them business communications service provider Clickatell and emergency dispatch cloud system RapidDeploy. Clickatell, which has offices in SA, Nigeria, Canada and the US, has expanded steadily over the past 10 years, setting its sights on a US stock exchange listing sometime this year.

According to Pieter de Villiers, the company’s founder, Clickatell could ‘certainly list in the US provided we felt the company would get enough attention given market cap and size’. Given the momentum in the business, private equity could also be an option, he says. While the company’s US presence is still new, RapidDeploy CEO Steve Raucher says he sees great opportunity in the country, which offers a huge pool of potential customers. RapidDeploy has already started pilot tests and is in contract discussions with more than 75 emergency agencies throughout the US, including city governments and police departments. 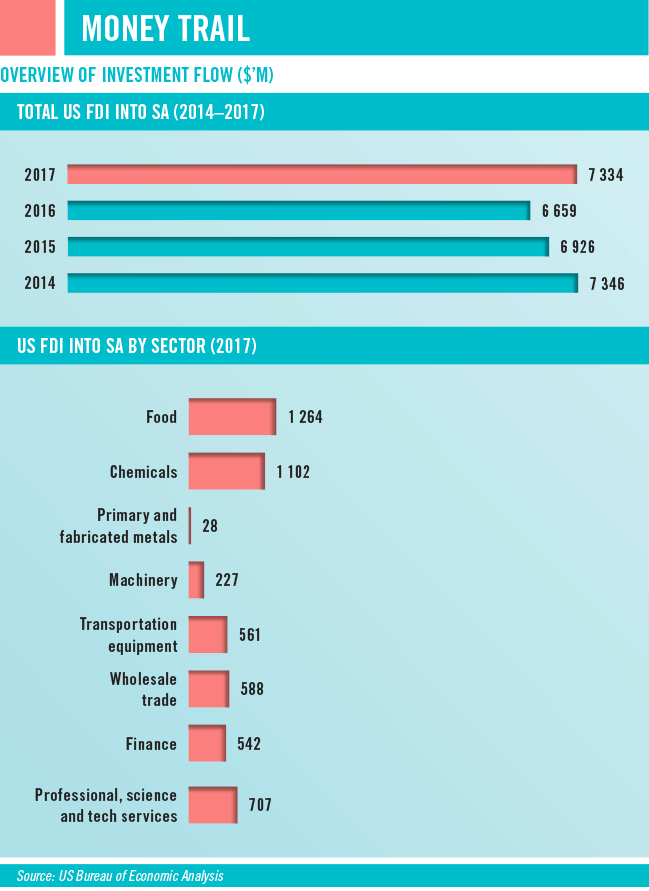 Cape Town-based beverage company Bos Iced Tea launched its first international office in Amsterdam in 2014 and currently sells its product in 14 countries. It launched in California in December last year. CEO Dave Evans believes the US is their next big market as it offers ‘tremendous growth opportunities’. In fact, he has been quoted by CNN Business as having said he expects half of the firm’s sales to come from the US within the next three years.

As far as getting a business up and running in the US is concerned, the process is complex but easily navigable. ‘The US is very open to foreign investment. There are some hoops, but if you look at global rankings of registering businesses on the global competitiveness index, the US does very well,’ says Viljoen. ‘It’s not a deterrent when you look at the paperwork in terms of investing there or not.’

SA, conversely, could make it easier. ‘Two of the main discouraging factors for US firms to operate in South Africa include lingering political uncertainty over issues such as land reform and onerous visa regulations for foreign workers,’ says Packirisamy.

According to Viljoen: ‘SA’s ranking for registering a business has deteriorated over the past 10 years. There are several African countries where it’s easier to invest, so we aren’t flying the flag high in a global perspective when it comes to these things. We also have a lot of intricate local regulations, such as BEE, that add to the process.’