In a bold move, a number of SA banks will no longer provide finance for ‘dirty’ power production. This comes as a result of ever-growing pressure from consumers, shareholders and regulators on businesses to address climate change and carbon emissions.

Nedbank was the first bank in the country (and, according to the Centre for Environmental Rights, also ‘the first commercial bank from the Global South’) to pledge – in its 2017 sustainability report – ‘not to provide project financing or other forms of asset-specific financing where the proceeds will be used to develop a new coal-fired power plant, regardless of country or technology’.

In February, EE Publishers reported that Standard Bank and FirstRand Bank have followed Nedbank’s example in line with international climate mitigation agreements. The three SA banks have withdrawn from funding two proposed coal-fired independent power producer projects: Thabametsi in Limpopo and Khanyisa in Mpumalanga. Nedbank, which in 2010 became the continent’s first carbon-neutral finance organisation, states: ‘It is the responsibility of all businesses – whether they are carbon-intensive or not – to collaborate with government and other stakeholders to help meet domestic and international objectives. Socio-economic development imperatives can’t be achieved unless climate change is also addressed. It is not a matter of either/or, but rather of both or neither.’

This statement demonstrates how environmental, society, government (ESG) factors have rapidly moved up the business agenda, where in the past they had been discounted as ‘non-financial’ or ‘non-material’ risks. The WEF considers environmental risks (the ‘E’ of ESG) as so material that they now dominate the top 10 list in its 2019 Global Risks Report. They are (in the order of their likelihood): extreme weather events; failure of climate-change mitigation and adaptation; natural disasters; man-made environmental disasters; biodiversity loss and ecosystem collapse; and water crises.

However, tackling ESG goes far beyond reputational value and pleasing consumer perception, because embedding these issues in the overall business strategy and the wider supply chain is likely to add value and future-proof an organisation, leading to long-term sustainability. ‘Businesses who are ESG-intelligent tend to have a deeper understanding of the integral aspects of sustainability; [they] are positioned to make better decisions with the information and engagement processes adopted and, as a result, their corporate behaviour enables them to systematically influence their key stakeholders,’ says Bongiwe Mbunge, business and sustainability partner at Mazars. ‘The strategic imperative on an environmental perspective will lead them to measure their carbon footprint, then employ innovative tools of reduction, which adds back to their bottom line. On governance, some of the internal value derived goes as far as the embedded culture and values, goal alignment and efficient use of internal resources,’ she says. 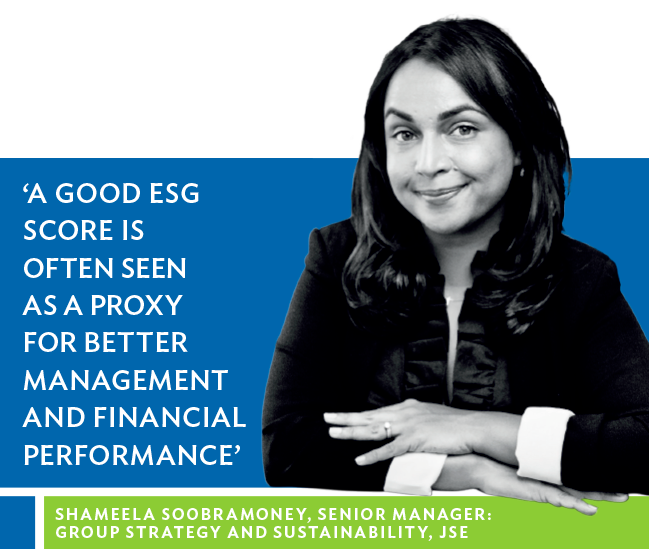 There is mounting evidence that ESG practices relate directly to better investment performance, says Shameela Soobramoney, JSE Senior Manager: Group Strategy and Sustainability. ‘A good ESG score is often seen as a proxy for better management and financial performance. A meta study of over 2 000 other studies showed that in the overwhelming majority of those studies, better sustainability or ESG practices impact positively on corporate financial performance.’ That’s why the FTSE/JSE Responsible Investment Top 30 Index is not only a useful tool for investors but also encourages issuers in benchmarking their ESG efforts against those of their peers.

Soobramoney explains that the JSE intends to enable an environment in which a more sustainable economy can prosper through governance rules and responsible investment products (such as the green bond). The exchange is also heavily involved in advocacy and facilitating the engagement between investors, issuers, asset managers and other constituents, as for instance during the JSE’s annual ESG investor showcase.

This interaction is necessary, because – according to Stephanie Giamporcaro, associate professor at UCT’s Graduate School of Business – SA institutional investors and their fund managers still don’t ask the right questions, or properly consider the ESG risks. She therefore argues in favour of a proposal by the Financial Sector Conduct Authority to make it mandatory for pension funds to report on their ESG provisions. If legislated, the pension funds would, for example, have to show how they apply ESG factors to assets they intend to buy; how regularly they measure the compliance of their assets to their sustainability criteria; and to report on how these provisions are being met in financial statements as well as annual trustee reports, says Giamporcaro. It is to be hoped, she adds, ‘that stronger regulations in South Africa could help to shift short-sighted and deeply ingrained views around ESG factors, as they did in Europe’.

Yet at least when it comes to the E of ESG-related legislation, SA’s environmental laws are generally clear and comprehensive, and comparable with those of First World countries, according to Lloyd Christie, head of ENSafrica’s natural resources and environment department. ‘In other words, industry is generally well appraised of the “rules of the game”.’

Garyn Rapson, partner and environmental lawyer at Webber Wentzel, explains that SA’s laws are well structured in that the National Environmental Management Act (NEMA) provides the broad legal framework, whereas specific environmental management laws focus on specific environmental aspects. ‘Almost all aspects of the environment are now formally regulated, including water, biodiversity, protected areas, the atmosphere and waste,’ he says. ‘The problem is not the law in South Africa, which is world class, but it is the implementation of the law in a Third World country.’ 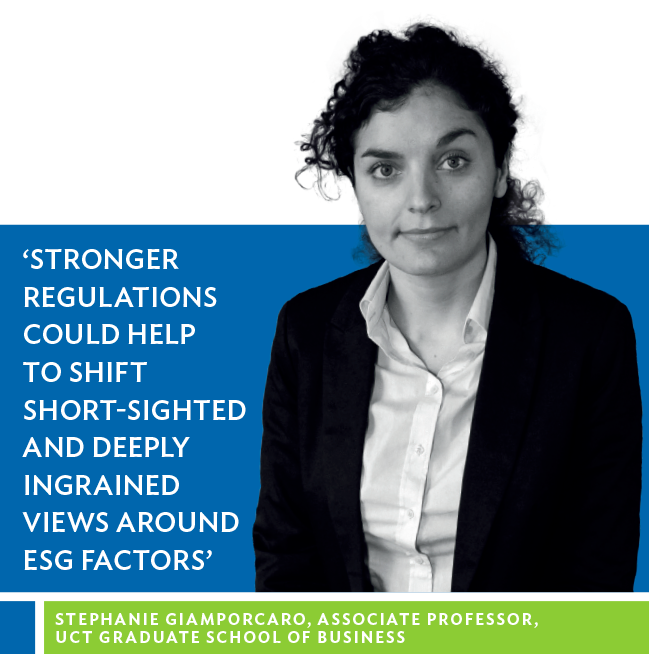 In addition, the increased scrutiny of the auditing profession in SA is leading to more auditors refusing to sign off on annual financial statements where an entity is believed to have contravened environmental laws. James Ross, environmental law associate at Norton Rose Fulbright, points out that the directors of a company can be held personally liable for any negative impact on the environment. ‘Under NEMA, liability also includes board members, executive committee members, contractors, agents, employees as well as managers of a firm,’ he says. ‘It even extends to environmental damage, degradation or pollution that is inadvertently caused by the company which they represent. A conviction could result in a prison sentence of up to 10 years and a maximum fine of R10 million.’ This principle was applied in the landmark Blue Platinum Ventures case in 2014, which saw the director of a clay-mining company criminally convicted and sentenced to five years imprisonment for environmental degradation. ‘The sentence was, however, suspended on condition that the affected areas were rehabilitated within a period of three months. The rehabilitation costs were estimated to be in the region of R6.8 million,’ says Rapson. ‘The Blue Platinum and similar prosecutions are a clarion call for directors and other company officers – across all sectors – to exercise a higher degree of vigilance and compliance with environmental legal obligations, ultimately contributing towards the minimisation of environmental harm.’

Prosecution has not been limited to mining but also extended to the waste, chemical, steel and metals industries, says Christie. ‘In our experience, directors have a much more sober approach to the impact their decisions and corporate action have on the environment.’ They will have to stay abreast of compliance to new legislation – notably the National Environmental Management Laws Amendment Act, the Climate Change Act and the Carbon Tax Act, which are still bills in different stages of being formalised. ‘These laws will all put a “price tag” on environmental impacts,’ says Christie. ‘The carbon tax [expected to take effect from 1 June 2019] will have the most noticeable impact and is also the most publicised statutory intervention. ‘The one that is busy sneaking in under the radar is the requirement for general industry, not just mines, to provide financial security for the undertaking of certain activities. This entails a new statutory obligation on companies to put up impact management and rehabilitation, and financial guarantees as security to ensure that their duty of care towards the environment is provided for.’

The stricter regulatory and legal requirements, combined with increasing public awareness, better-informed shareholders and more vocal activists, will help with policing and punishment of environmental transgressions – be it non-compliance or far-reaching pollution and degradation. At the same time, SA businesses will be pushed harder to understand ESG factors and their potential impact on the environment. Those companies that take steps to mitigate these risks are likely to improve their bottom line and long-term sustainability, while doing the right thing for the planet.