Flying from Johannesburg to London is usually quite predictable. It’s a given that the journey will be direct. The most taxing decision you’re likely to make is which in-flight meal to choose. Now, imagine that same journey routed via Moscow… For travelers across Africa, these types of complex routes are the norm.

It’s easy to understand why the launch of the Single African Air Transport Market (SAATM) by the AU this year to open up the continent’s skies has been met with applause by the aviation industry, most notably the International Air Transport Association (IATA), which has called has called the decision ‘momentous’.

Raphael Kuuchi, IATA special envoy to Africa on aeropolitical affairs, says the agreement represents a decisive move towards greater intra-African connectivity. He explains that the fastest flight from Algeria to Cameroon routes via Istanbul, takes 24 hours and involves three separate take-offs and landings. Lesser routes can take up to 30 hours – half the time it took the Virgin Atlantic Global flyer to circumnavigate the entire globe. What’s more absurd is that the flight costs 80% more when compared to a London-to-Athens flight, for example.

The Open Skies policy is expected to propel the African air-transport market to become the fastest growing aviation region in the world over the next 20 years, according to IATA. Passenger traffic is set to grow at 5.9% a year, with nearly 300 million passengers expected to fly across Africa by 2036. Currently the air transport industry directly and indirectly contributes 6.8 million jobs and $72.5 billion to the continent’s GDP. In SA, passenger traffic has increased, with the current aviation industry employing 490 000 people and contributing more than $12 billion to GDP. ‘With the right policies and regulations, passenger traffic to and from South Africa is forecast by IATA to grow from the current 23.6 million to 54.4 million over the next 20 years,’ says Kuuchi.

Expanding air links and the growth of regional airline hubs are also allowing for more business air travel from Africa into SA. The air transport sector’s ability to connect SA to other African countries’ fast-growing cities can help drive economic growth, boost trade and tourism and create jobs. OR Tambo International Airport in Johannesburg is Africa’s biggest and busiest hub, followed by Cairo in Egypt, then Addis Ababa in Ethiopia. With 26 countries having joined SAATM, more traffic growth is expected. In addition to existing hubs in SA, Kenya, Ethiopia (in sub-Saharan Africa), others may emerge in West Africa. Kuuchi says the unrestricted intra-Africa market access for African airlines will speed up regional integration and increase trade across the region. But the glory of Open Skies comes with a caveat: Africa will only realise the full benefits of aviation if implementation is efficient and more countries commit to SAATM, cautions Kuuchi. ‘Every open-air service agreement has boosted traffic, lifted economies and created jobs. And we expect no less from Africa on the back of the SAATM agreement.’

He suggests that, as it is a major manufacturing country in the region, SA could benefit significantly from increased mobility and trade if the right policies and regulations are promulgated to complement the SAATM initiative. ‘Further, if South Africa implements the AU recommendation to all African states to facilitate visas on arrival for African citizens by the end of 2018, travel for business, trade and tourism to South Africa will see a major boost.’

An increasing need to further ease visa restrictions and red tape to allow business people to move quickly around Africa has never been more important. Euromonitor senior analyst Christy Tawii says: ‘While there have been some initiatives to increase domestic travel in Africa, intra-regional travel still has some way to go. African tourist boards will need to shift their focus, as many tend to focus on attracting European and North American travelers instead of their neighbours’. The independent market research firm confirms though that, according to current trends, SA is positioned as a value-for-money destination, driven by a weak currency and the introduction of new and increased direct air connectivity to and from major overseas markets.

‘To facilitate this growth, improved air access, visa openness and favourable trade conditions will become even more critical in 2018,’ says Oz Desai, GM of Corporate Traveler South Africa. ‘In Africa, where much of South Africa’s outbound business travel occurs, there have been some improvements to visa policies. We also expect visa openness to continue improving in 2018 as the continent seeks to move towards the AU’s goal of being a continent of seamless borders.’

Rwanda was one of the first countries on the continent to grant a visa on arrival to any African citizen arriving in the country. RwandAir is one of Africa’s fastest-growing airlines currently flying to more than 16 destinations across Africa, the Middle East and Europe. Kigali International Airport is fast becoming a transit hub for the airline and others operating there.

Kuuchi adds that the government’s integrated policies of air transport, tourism and conferencing have seen investments in all three sectors. ‘Linking South Africa to Rwanda has the potential to attract investors, tourists and transit traffic connecting to other parts of Africa.’ 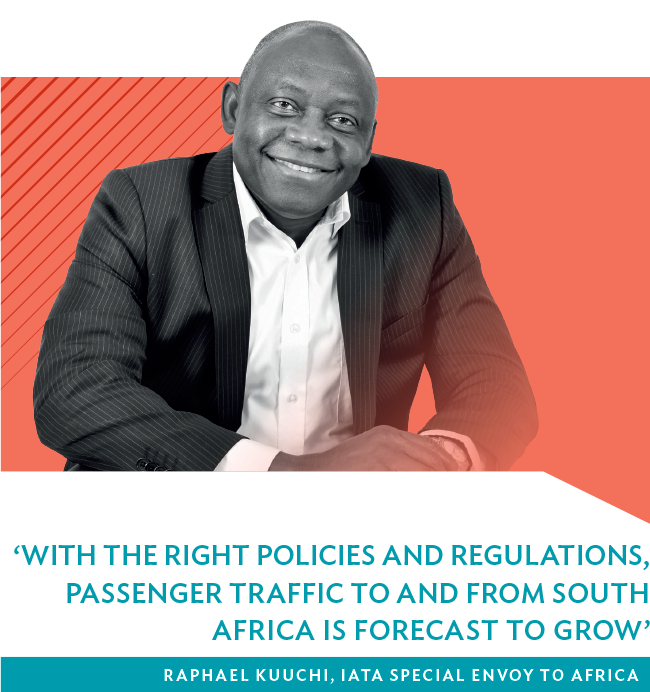 Further developments include Cape Town Air Access (a partnership between Wesgro, the Western Cape government, the City of Cape Town, Airports Company South Africa, South African Tourism and Cape Town Tourism), which recently welcomed RwandAir’s direct flight from Kigali via Harare to Cape Town.
‘Not only does this facilitate improved business and tourism…but it further positions the Cape as a gateway to Africa,’ according to Wesgro CEO Tim Harris. The continent is the biggest source market for Western Cape goods – valued at more than R45 billion. To date, Harare is the largest unserved city in Africa for Cape Town, with about 40 000 passengers recorded through Cape Town International Airport in 2017. Passenger growth revealed a 15% increase per year between Cape Town and Zimbabwe, with a significant 39% growth recorded between Victoria Falls and the Mother City last year.

RwandAir marketing manager for SA, Sarah-Jane Silburn, says the airline has leveraged the country’s geographical location by allowing flights to connect both intra-Africa traffic as well as international traffic through the hub of Kigali. ‘One of our unique selling points is the fact that the majority of our connections through Kigali take less than two hours. We continue to work on improvements to ensure that there’s seamless travel for our customers through our hub.’ With the anticipated increase in passengers over the next couple of years, a bigger international airport called Bugesera is being built outside Kigali.

Despite this, the Open Skies policy is not without its drawbacks. Alexandre de Juniac, IATA director-general and CEO, identified a number of pressing concerns for Africa, among them blocked funds and denied access to foreign exchange. ‘In nine African countries, international carriers are unable to repatriate their foreign currency earnings, while locally based airlines experience difficulties making on-time foreign currency payments to their suppliers and business partners,’ he says. ‘Countries blocking funds are undergoing significant economic challenges. But blocking airlines’ funds is not the answer. It is in everybody’s interest to ensure that airlines are paid on time, at fair exchange rates and in full.’ IATA is currently working with the governments of various countries to make these withheld funds available.

De Juniac says aviation is ‘vitally important’ to Africa, not only for creating millions of jobs and contributing almost $73 billion in GDP across the continent. ‘It connects people and businesses, enables trade and tourism, reunites families and friends, carries products to markets, and vital medicines and aid to communities.’

If history is anything to go by, Miguel Santos, Boeing director for sub-Saharan Africa – writing for Business Day – makes a valid point. ‘If it seems Africa’s aviation sector is behind the curve compared to the rest of the world in terms of liberalisation and modernisation, it is worth pointing out that the global airline industry is very young.’

Passenger air travel only became mainstream after World War II. It was not even 50 years ago, in 1969, that ‘the Boeing 747 jumbo jet made long-haul international air travel affordable and opened up the possibility of overseas holidays’, says Santos. ‘The pioneers of the international aviation sector had no precedents. Nothing of its sort had existed, so they used maritime legislation as a template, and this is why the sector has some arcane regulations.’