Aristotle’s assertion that excellence is never an accident is the base architecture for a current key trend in motoring – the emphasis on eminence over the everyday. And nowhere is this more evident than in the SUV market, where exclusivity is now the go-to goal, the clattery tractors of yore increasingly a thing of the past.

Trend watchers Marketsandmarkets predict the SUV market is set to grow into 2020, with 30 mil­lion SUVs likely to be sold by then. But traditional virtues of durability and safety have now been overtaken by considerations of exclusivity and prestige, with canny marketers accenting desirability above dependability. Into this bespoke family of all-singing, all-dancing all-terrainers comes a coterie of upstarts, keen to muddy the established Range Rover/Fortuner waters. Enter then the golden age of the SUV.

The ultra-elite SUVs used to be a field of one, the Bentley Bentayga, a Billy Bunter of a boiled sweet to look at but peerless in application (and more than a little useful in the mud at Aintree). Cue the new kids on the block, an audacious Italian and a fellow Brit. Lamborghini’s Urus is of course underwritten by Volkswagen, R&D paid for by the good folk in Wolfsburg. Then there’s the Rolls Royce Cullinan, four square and upright like its Phantom brothers from which it inherits a fair amount of kit, chassis and V12 engine. It’s named after SA’s very own rock of ages, big indeed, and full of firsts: it will be the first Roller with a hatchback, a touchscreen, an all-wheel drive system and a thing for the dirt, at least officially – many an aristocrat has used their Roller for estate gambolling, it’s a mark of pride.

Europeans late to the SUV market have battled to make a name for themselves, though not from want of trying. Peugeot’s gorgeous 5008 and Alfa Romeo’s Stelvio Quadrifoglio are adored by their owners but passed over by the general public, as much because the brands are hardly known for executive SUV prowess as any inherent failings. Of the two (hold thumbs that the 5008 does in fact reach these shores) the Stelvio is the tastier option. It shouldn’t be as good as it is with that extra height, compro­mised centre of gravity and those off-road pretentions. But it is – a veritable masterclass in dynamic engagement. It oozes sex appeal and, after a burn through the countryside making full use of that Ferrari-developed 2.9-litre V6 bi-turbo petrol engine, completely addictive.

Most impressive of all the splintering SUV segments has been the compact executive niche; Jaguar, BMW and Volvo have the baton and the wind at their backs with cars that suggest compact can be covetable, refined and stylish to boot. 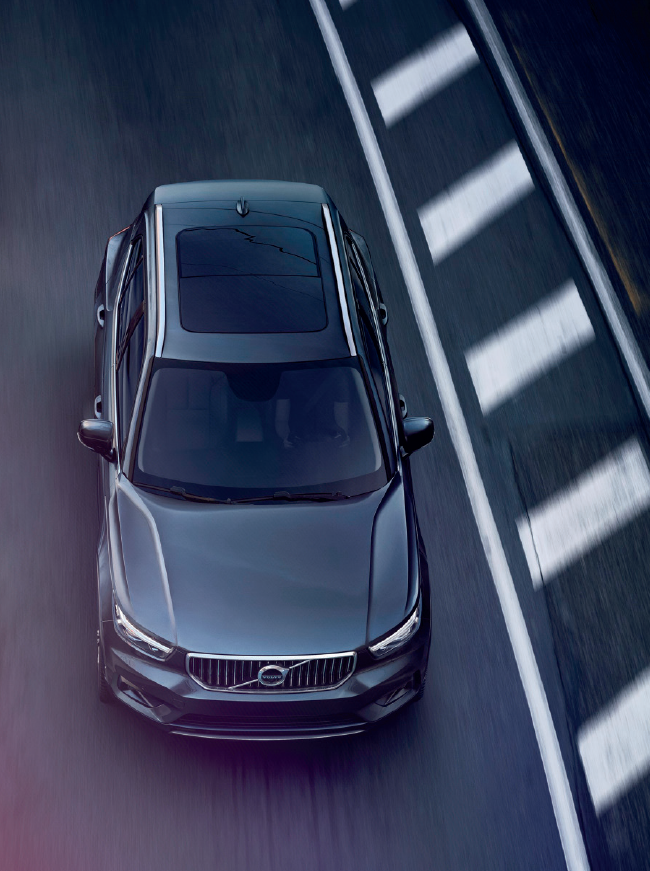 Volvo XC40
This year’s Geneva Motorshow hit was Volvo’s XC40, their spot-on miniaturisation of the XC90, Gothenburg’s pioneering grand SUV. Spot on, because it combines the company’s smartphone-like tech­­nology, a sensible size, decent design and dynamic skills previously lacking in the Swedish SUV stable. It’s been said that the XC40 is the first Volvo in recent years with that ‘X factor’, and the press agrees. As does the market; orders for the new car, including SA, have exceeded supply. Engines are, of course, all variations on Volvo’s single power plant, the ubiquitous 2-litre turbo in diesel or petrol guise. It’s the drive that stands out – confident, taut, almost BMW-like and compliant too, with none of big brother XC90’s harshness at low speeds.

Jaguar E-Pace
Jaguar’s small-but-smashing debutante is the E-Pace – stylish primarily, then capable and efficient as ancillaries. The marque’s Geneva emphasis was all about the coming twin electric motor i-Pace, with its 500 km range. So much so that the E-Pace rather faded into the shadows. Perhaps not a bad thing – E-Pace, based on the heavy old Evoque platform rather than the latest, lighter F-Pace chassis, is hardly a fuel sipper, and only marginally sporty. The ponderous nine-speed gearbox and lag-prone turbo petrol engine are not the sharpest for a demanding market either, so it may have its work cut out for it (the turbo diesel is the one to have). It’s a city-style chariot, forthe seen-and-heards, a compact SUV alternative to the much-admired, full-size F-Pace. 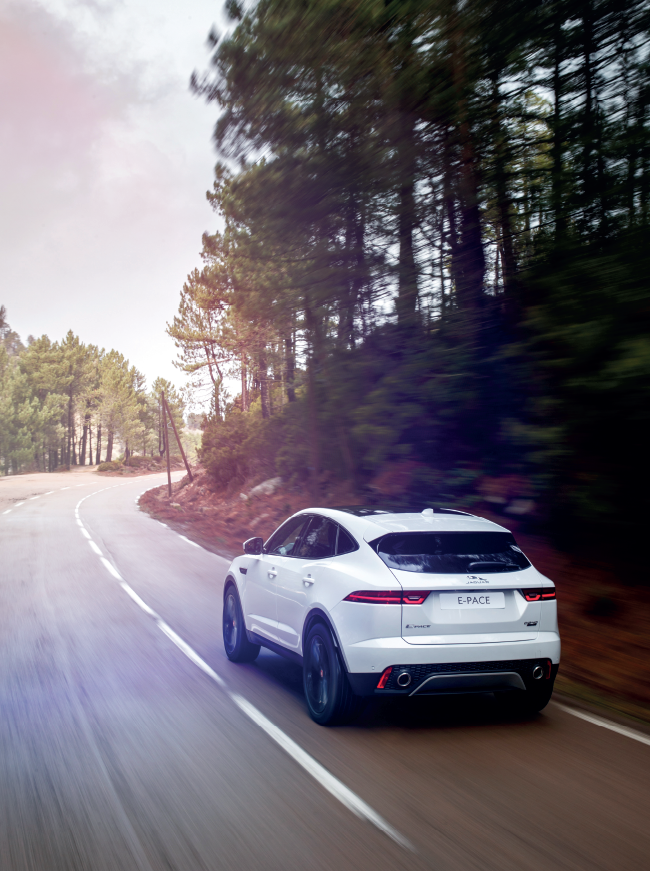 BMW X2
Bavaria’s segmentation zeal is legendary; the X family is the all-purpose (read ‘beefier’) bloodline to the conventional sedan and hatch. And it’s exploding – expect the new X7 soon and ultimately the behemoth X8 to wipe the floor with the Bentayga and the Urus. Down the other end of the line, theX2 has been well received, ostensibly a sportier X1 with a modicum of design flare and better dynamics; a hewn-from-stone feel behind the wheel, weighted, direct steering and a lightness of touch in a chicane. It’s marketed as a crossover but steals kudos from its bigger SUV brothers and sisters. BMW has succeeded in combining contemporary curves with the extra height, the vaguely coupé-like profile, the large wheels and the well-integrated kidney grille. It all works well together, a relief to long-suffering X1 owners used to being the butt of jokes around the dinner table.

BMW X7
X7’s job is to lead the charge against the new wave of jumbo techno-disruptors, the Volvo XC90, upcoming Audi Q8 and popular Range Rover family. The recently upgraded, vastly improved X5 is no longer large enough and even the X8, due next year, will be smaller, a sports SUV in the style and attitude of the X6. Seven full seats is the X7’s bottom line, with better driving dynamics than the X5 and BMW’s new interior equally important. Initial plans for six and eight-cylinder engines only have been amended – a four-pot derivative will come, some time in 2019. Nevertheless, the new 4.4-litre bi-turbo V8 petrol engine out of Spartanburg, South Carolina, delivers the keynote speech. And expect the company’s epic V12 to find voice in the MSport version, also by 2019. A tasty prospect.

Audi Q8
Rather than an inflated Q7, Audi’s Battleship Potemkin fronts the company’s reinvigorated sports attitude, offering an aggressive, hunkered-down profile and bearing; it’s more BMW X6 than Q5. The concept is similar to X8 – an overdose of street cred rather than off-road ability, with the emphasis on design daring and individuality. Daring? From Audi? Alert the press. Power (and other mechanicals) will be mostly Q7 derived, with chassis tweaks and engine mapping making the most of the lower centre of gravity (over the Q7) and weight saving. 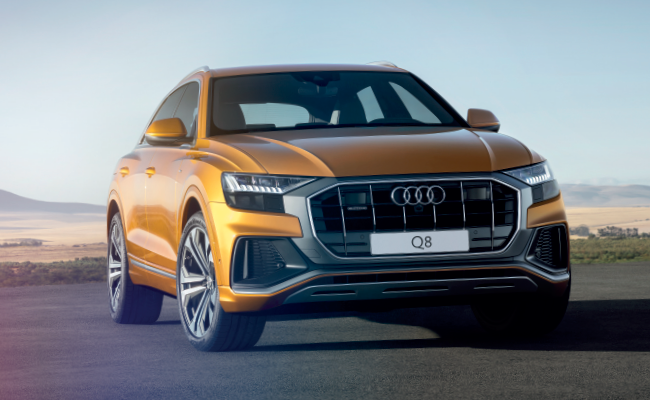 Mercedes G-Class
While the opposition pedals sports SUVs, Mercedes stays with tradition, at least with this particular bloom in their SUV bouquet. That said, there’s a new varietal here – the agricultural G-Wagon (essentially 1970s army transport) gets a bespoke interior for 2018, electronic architecture shared with the S-Class and, for SA, the ever-efficient 3-litre turbo diesel to ensure it avoids the fate of the hapless, change-phobic Land Rover Defender.

Toyota Prado
Equally ageless and ever popular, Toyota’s Prado has been to the tailors and come away with a better-fitting suit. Subtle tweaks to the grille, lights and bumpers have made a surprisingly big difference. Inside is where the real work has been done though, with a far more premium interior, reflected in better materials, enhanced electronics and a new full-length sunroof, as a feature of the range-topping VX-L. Its abilities remain peerless – on a recent Richtersveld trip, it once again demonstrated why it is the go-to vehicle for truly arduous terrain. Very few surfaces offer any real challenge, yet on the open road the 3-litre diesel engine propels it along with acceptable gusto. A tendency to wander and float in crosswinds at speed is its only flaw, understandable for such a Leviathan, irritating nonetheless.

Jeep Grand Cherokee Trackhawk
Hellcat they call it and hellcat it is – wonderful news for the legion of Jeep fans that have been so poorly treated in SA; the barnstorming Trackhawk is a definite for our market, though getting hold of one will mean paying well over the sticker price. It’s all about the numbers – the 6.2-litre V8 delivers 527 kW and 874 Nm to an all-wheel drive system, managing a 0-100 km/h time of 3.6 seconds and a top speed of 300 km/h. Much fiddling has been done to ensure the reserves of torque don’t fry the drivetrain, and factory insiders say it should be ‘okay’ now, so there you have it. Inside it’s surprisingly un-American (classy and well-screwed together) though the army of aids will test even the most patient of drivers. Buy one as an investment – there won’t be many. 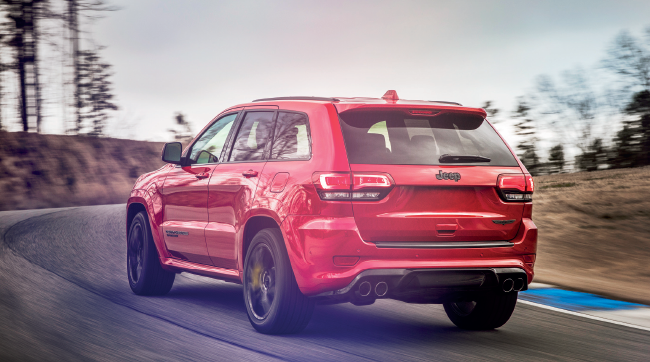 Back to basics
With all the movement in the executive SUV market, it’s easy to miss the evolution of the breadwinners. But the industry stalwarts – the Volvo XC60, Lexus RX 350, Volkswagen Touareg and Porsche Cayenne – have all upped their game of late.

Volvo will hope some of little sister XC40’s magic fairy dust will fall on the XC60, though the recipe is more XC90 than XC40. Certainly it’s a quantum leap from the previous XC60, Volvo’s best-seller locally, though hardly cutting edge. The new XC60 boasts excellent styling, good pricing, dynamic improvements and a wholly new, user-friendly interior. There’s a cosseting ride as well.

Volkswagen’s Touareg and Porsche’s Cayenne have traditionally ignored each other, as too-similar cousins often do, and as both hone their respective skills – Porsche its sports abilities with hotter V6 and V8 engines, VW its comfort factor with the new Innovision Cockpit – there will be no reason for a cessation in hostilities. Their upgrade brings to five the number of new VWAG SUVs using the same MLB Evo platform. The Touareg is the cheapest way of buying it, the Lamborghini Urus the most expensive.

In such rare company the Lexus RX 350 must work hard – and it does, offering a cocktail of serenity and efficiency. The RX has long been the quietest SUV around, noise-deadening wheels and excellent insulation working with the hybrid system of the 450h SE to ensure near-complete hush at the legal limit. The new shape won’t be loved by all, especially in extra-length, seven-seater L guise, with its awkward rear overhang and fussy tail. But a combination of bulletproof reliability, relative exclusivity and ease of operation will win it plenty of admirers.