NICE TO MEET YOU - JSE MAGAZINE

On any given weekday morning, the Foreshore area around the Cape Town International Convention Centre (CTICC) is a hive of activity. Business people hurriedly make their way to one of the cavernous auditoriums or meeting rooms within the CTICC.

You don’t need to see the numbers to know that business is booming in the meetings, incentives, conferences and exhibitions (MICE) space in the fairest Cape, as well as the other major centres of Johannesburg and Durban.

SA has climbed in ranking as an international conference destination to number 32 in the world, and was named the best global conference haven in Africa and the Middle East. SA Tourism’s 2015/16 report indicated that the country had secured 66 international association conferences and meetings for the next five years. ‘These are events already contracted for South Africa and are guaranteed business for the country’s tourism and hospitality industry,’ says Mmatšatši Ramawela, CEO of the Tourism Business Council of South Africa. These events will contribute about R1.4 billion to the economy, attract 108 134 association professionals and generate 311 event days, which will benefit all suppliers in the business-events value chain. In anyone’s book, these are not small numbers. In addition, SA has 45 event bids pending – again, planned to take place in the years to 2022. These events can potentially contribute R1.5 billion to SA’s economy.

Pundits use the term ‘bleisure’, which refers to the blurring of lines between leisure and business travel. Booking.com’s predictions for 2017 show a further upswing in this trend, highlighting that consumers are attaching more value to workplace travel opportunities than ever before. Events and conferences have a direct economic impact on their host cities, including job creation and money spent, as well as influencing travellers’ perceptions of a city.

Research shows that delegates generally spend nine days in SA, of which – on average – five are at the event. Roughly 32% of delegates travelled in SA prior to the event and 34% said they travelled in SA after. This has a direct and indirect contribution to the tourism value chain, which includes accommodation, restaurants, tourist attractions and transport.

However, what about the individual centres? How are they measuring up? There are three main host cities in SA. Cape Town hosts about 47% of the international conferences, Gauteng around 19% and Durban 15%, according to the SA National Convention Bureau (SANCB). 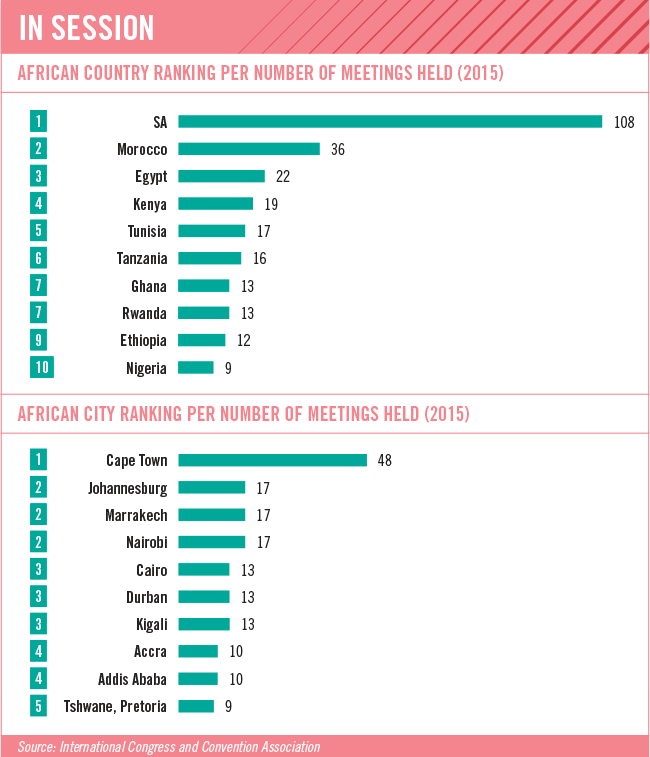 The jewel in SA’s events space is undoubtedly Cape Town – and its gem, the CTICC. Over the past several years, the CTICC has hosted an average of more than 500 events per year. During the 2015/16 period, it saw an increase in the number of international conferences and trade fairs hosted. This rise is attributed to growth in the small (less than 500 delegates) and medium (between 500 and 1 000 delegates) conference bands with almost 45 000 delegates attending global conferences.

‘Cape Town as a destination is without doubt a major draw card,’ says Julie-May Ellingson, CEO of the CTICC. The city’s reputation as a global tourism and business events destination is growing steadily – and Cape Town constantly features on ‘top cities to visit’ lists. Ellingson says that globally, Africa is the meetings destination to watch. ‘A number of new centres have opened that are also driving more conferences to the continent.’ The CTICC has also embarked on an expansion project, set to open in July 2017. The new facility – CTICC East – is expected to boost the number and scale of the events it can host, effectively doubling the conference and exhibition capacity.

There is no one specific sector with a majority over the other, says Ellingson. The City of Cape Town and the Western Cape government have placed priority on strengthening Cape Town and the Western Cape’s competitiveness and potential through the promotion of nine key sectors for trade, investment and growth. The CTICC has aligned its own marketing strategies within this context, to secure conferences and exhibitions in these key economic sectors.

Not to be outdone, Johannesburg is also receiving top billing in the business events stakes. SA Tourism reported in May 2015 that Johannesburg had risen 133 places in the International Congress and Convention Association (ICCA) rankings in the three years prior. According to the ICCA’s 2014 report, released in May 2015, Johannesburg was ranked 101 among the world’s top conference destinations, up from 136 in 2013 and 234 in 2012.

According to Shaun Bird, general manager of the Sandton Convention Centre (SCC), there has been an upswing in the market in the past few years, despite the various challenges facing the industry, especially in the geopolitical sphere. ‘The exhibition market continues to perform well, with consumer goods underlining the fact that South Africa is a strong market for foreign products, especially from the East.’

On specific sectors driving demand on the SCC, Bird says these are very varied and most events are unique. Government demand for space continues to drive the numbers, but these tend to be large or once-off events, such as the recent COP17. The SCC also has a strong presence in the banking and financial services sectors.

Identifying a noteworthy trend in the convention space in 2016, Bird adds that there was a shift towards people organising exhibitions and stand-alone events earmarked for specific industries and associations. Additionally, with the exchange rate in SA’s favour, there has also been a significant upswing in the country as a destination of choice for hosting events. ‘The SCC is taking advantage of this trend, and in co-operation with SA Tourism, SANCB, City of Joburg and other convention bureaus, we’re getting the message out to the international community that South Africa is a world-class destination,’ says Bird. 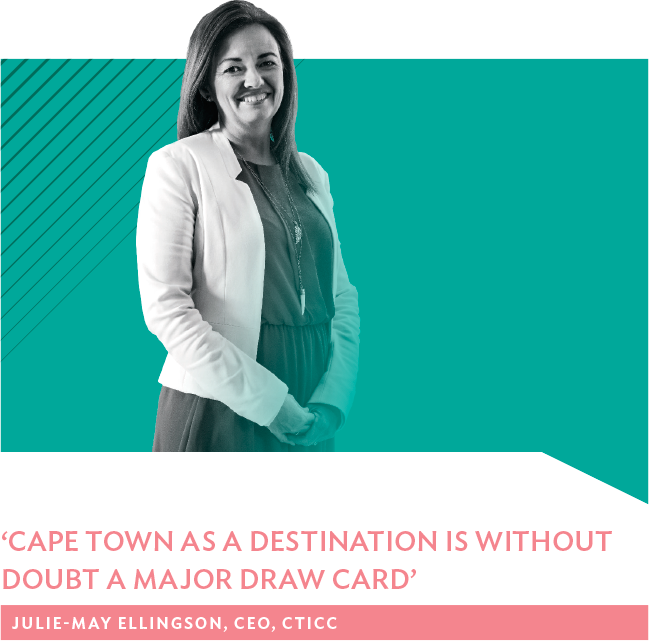 The SCC is looking forward to another busy year. As of October 2016, it had close to 50 major local and international events scheduled for 2017, which include 17 confex events, 11 exhibitions, 10 conferences and numerous other special events and presentations, as well as six major events organised by associations and societies.

Durban may be the smaller of the trio of core cities but it is certainly no slouch in the events space. Durban and KZN were rated as Africa’s best MICE destination in 2012 and 2013 by Business Destinations magazine, and Africa’s leading meetings and conference location at the World Tourism Awards in 2014. In 2015, the Durban KwaZulu-Natal Convention Bureau was entrusted with leading the Future Convention Cities Initiative for the next two years. And there are further accolades. In August 2016, the Durban International Convention Centre (ICC) was named among the top 15 convention centres worldwide by the International Association of Congress Centres.

The 2015 fiscal year was a successful one in many respects for the Durban ICC. According to its news centre, the company achieved a strong set of financial results and delivered significant economic and social benefits to the city and province. It attained notable year-on-year increases in every major economic indicator and contributed R4.6 billion to GDP, showing a 47% growth from the previous fiscal year.

Of course there are other smaller players in the convention space. Not least, the JSE itself. ‘In response to the JSE’s clients’ requirements for a central, convenient and hassle-free location to host roadshows, results presentations, board meetings, AGMs and other client engagements, the JSE has created a one-stop eventing and conferencing environment at its Sandton headquarters,’ says Carol Crozier, Manager of Company Services, Marketing and Corporate Affairs at the JSE.

Situated in the heart of Johannesburg’s financial district, the JSE boasts state-of-the-art audiovisual equipment to enable web streaming and has created a media hub where CNBC, Power FM and the SABC each have studios. ‘Clients are invited to celebrate achievements by symbolically opening the market by sounding the kudu horn in front of the impressive wallboard,’ says Crozier.

The JSE’s auditorium can seat up to 145 and the atrium 180, but its integrated AV systems enable seamless integration between spaces to cater for larger numbers. The JSE atrium is suited for smaller numbers as it can be tailored around the number of people attending. Breakaway rooms are available for smaller executive meetings.

The ability of the business events space to boost the tourist economy in SA as well as the entire continent is significant. In an interview with Fin24 in early 2016, Amanda Kotze-Nhlapo, executive manager of the SANCB, said growing the African events industry by encouraging meetings of local associations to rotate on the continent could offer a huge opportunity.

‘South Africa, for instance, still only hosts about 10% of all the meetings of African associations –some years only 5% or 6%. There are 2 000 active African associations of various sizes with an average of between 100 and 200 delegates each,’ said Kotze-Nhlapo. ‘The potential for growing it is therefore huge, but we cannot do it by ourselves. We have to work together.’

Judging by the dynamism in this space already, there is massive scope for growth.