TALK OF THE TOWN - JSE MAGAZINE

Remember when it took a village to raise a child? That African proverb will soon have to upscale, as the continent comes to terms with the ‘century of the city’. The world’s sprawling metropoles are swiftly emerging as the symbol of the modern age, as millions of people move out of rural villages and into the major urban centres.

Today, for the first time in human history, more than half of the global population (some 3.7 billion people) live in cities, and that number is expected to double by 2050. The bulk of that rapid urbanisation will happen in the Global South – and, according to UN estimates, Africa will be the world’s fastest-urbanising region between 2020 and 2050.

It is expected to be 62% urban by 2050, and the continent’s wave of urban growth is happening on a quicker and larger scale than anything the world has ever seen.

However, simply throwing numbers around doesn’t do this phenomenon justice. To really put Africa’s rural-urban shift into perspective, take a look at Kampala. Today, there are around just 35 megacities (that is, cities with more than 10 million inhabitants), and three of those – Lagos, Cairo and Kinshasa – are in Africa. The World Bank estimates that by 2040 Africa will have doubled that number to at least six megacities – the Ugandan capital being one of them, with an expected population of more than 20 million. Reality check: Uganda is currently the fourth-least urbanised country in the world, and Kampala today has a night-time population of barely 2 million. 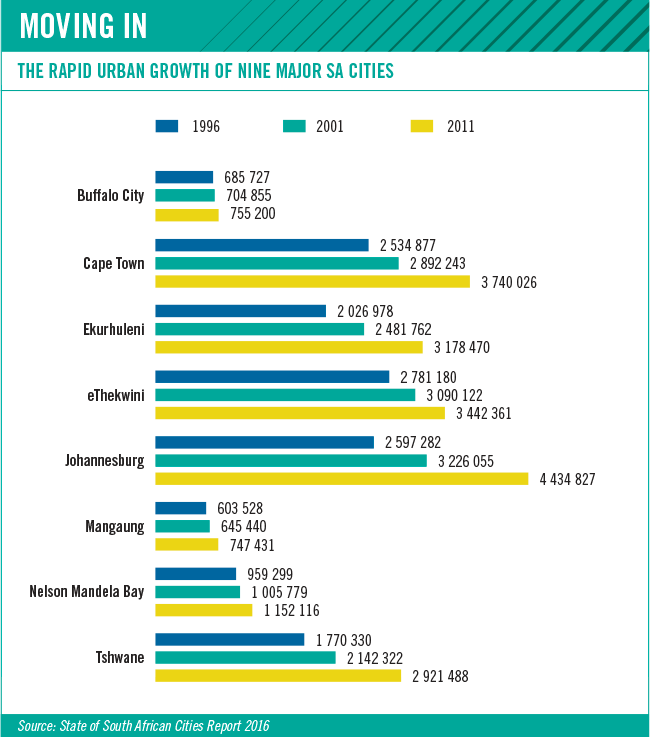 Yes, that’s scary. But it’s also a huge opportunity, as executive director of UN-Habitat Joan Clos points out. ‘Urbanisation in the Africa of today is an untapped tool for development and economic growth,’ Clos said recently, arguing that Africa’s cities hold enormous potential as economic centres and innovation hubs. In fact, a 2011 UN-Habitat report concluded that cities are responsible for disproportionately higher rates of economic growth compared to rural areas. With just more than 50% of the total population, the world’s cities generate more than 80% of global GDP. This is even more pronounced in developing countries. Nairobi, for example, is home to just 9% of Kenya’s population but generates 20% of the country’s GDP.

In a paper published by Oxford University’s International Growth Centre, economics professor Paul Collier noted that if Africa’s urban population really does triple by 2050, ‘in effect, two-thirds of the urban space that Africa will have in 2050 does not yet exist and so must be built during the next 35 years’. The existing third, he writes, has been built gradually over the past century – the challenge now is to build twice as much in a third of the time. ‘A successful city provides the physical conditions in which ordinary workers can be productive, and ordinary households can live in decent surroundings,’ he writes.

‘Building cities that meet either of these conditions is difficult; building cities that reconcile productivity with liveability requires investment that is both substantial and smart. No African city has yet achieved this combination.’

For Paul Jackson, co-founder and CEO of inner city property finance firm, TUHF Limited, it’s a challenge he’s happy to take up. ‘Rapid urbanisation presents opportunities for inner city investment,’ he says, adding that urbanisation is ‘entirely normal for a developing country’. He consider inner cities – the ground zero of urbanisation – as ‘hives of activity […] that cannot be found anywhere else’.

For example, ‘looking outside our head office window in downtown Johannesburg, we can see transport, government, finance, manufacturing and much more providing opportunities of employment and economic growth’, he says. ‘Our cities’ energy is resilient. It is the elements that make up this energy that evolve – as is evident over the last few decades where we have seen transformation from the 1990s ’til now.’ 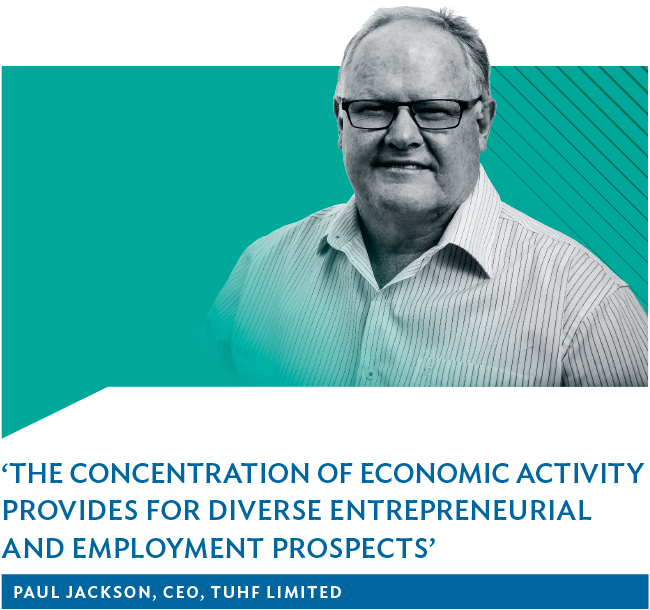 Yet the realities of urbanisation cannot be ignored. In 2012, the International Institute for Environment and Development published research that looked at how the various BRICS nations had dealt with recent urbanisation. India and Brazil in particular were cited as examples of the dire consequences of trying to resist the inevitable movement of people into its cities.

‘Brazil’s world-famous favelas show how failing to accommodate growing urban populations can lead to enduring social inequalities,’ the report noted, pointing to the country’s explosive urban population growth of 5.6% in the mid-20th century. ‘Brazil feared that poor rural migrants would overwhelm the cities. The government failed to plan for rapid urban growth, but that did not slow its pace.

‘Poor planning did, however, contribute to a very unequal urbanisation, with large segments of the population inhabiting poorly located and ill-served informal settlements.’

SA would do well to learn from that. According to the new State of South African Cities Report 2016: ‘Cities are associated with promise and opportunity [and] continue to attract many from rural areas and less prosperous cities, towns and villages in South Africa and beyond – people who are in search of work and a better quality of life.

‘Few arrive with the skills and resources to compete for jobs in the city, and these formal employment opportunities are becoming increasingly scarce. The result is increased poverty, unemployment, overcrowding and social tension.’

Again, though, Jackson sees that as more of an opportunity than a challenge. But doesn’t urbanisation lead to exclusion? ‘On the contrary,’ he says. ‘Cities provide great opportunities for social, cultural and political participation. The concentration of economic activity provides for diverse entrepreneurial and employment prospects. Cities are important drivers of development and reduced poverty.’

‘Then, we stop doing what’s not good, and we become better at the good. That’s specialisation. That’s productivity. Doing that with as many people as you can creates the opportunity for growth.’

That connectivity is absolutely key to the economic growth of a city. ‘In the labour market of a super-city such as London, the typical worker can access 2.5 million jobs within a 45-minute commute,’ writes Collier.

As Africa confronts the joint challenge and promise of continent-wide urbanisation, it will look to shape its cities as hubs of culture and commerce, offering exactly the degree of efficiency and specialisation that Collier describes.

‘Not just our cities are growing, but the way we live, work and interact in them is evolving as Africans start to redefine urbanity in their own image,’ says Aamena Desai, urban designer at Arup. ‘Cities and city regions are also becoming far more influential in providing services and leading infrastructure projects at the local level, rather than these being driven by centralised government.’

‘We made it a priority to work hand-in-hand with government. This enabled us to plan long term and provide much-needed infrastructure in the area, not only for the development’s residents but for the greater community at large.’

Desai says that coupled with rising urbanisation is the parallel growing influence that technology, social media and artificial intelligence has in shaping the way in which we live, work and access information, goods and services.

‘Together, urbanisation and technology are widening the sphere of influence that people have and increasing their agency to advocate for the types of cities and environments they want to live in.’

To this end, the City of Tshwane hosted the third Senior Experts Dialogue on Science, Technology and Innovation and the African Transformation Agenda this past November – innovation was high on the agenda. ‘The importance of cities as innovation hubs that have the potential to drive Africa’s transformation towards prosperity, inclusive growth and sustainable development is particularly relevant and urgent for the Gauteng city region,’ Gauteng Premier David Makhura said in his keynote address.

‘As the most urbanised and industrialised city region in sub-Saharan Africa, Gauteng has all the hallmarks of urban ecosystems in the developing world. We are the magnet that attracts more than 200 000 migrants a year due to the “urban promise”.

‘We have relatively developed infrastructure but huge backlogs remain, especially in the townships and slums. Rapid migration puts enormous pressure on the delivery of housing, healthcare and educational services and infrastructure.’

That alignment of government planning, business development and population growth is crucial to SA’s successful urbanisation.

‘Without the Internet of Things (IoT), smart city innovations would not be possible,’ says Reshaad Sha, CEO of SqwidNet, a subsidiary of Dark Fibre Africa. ‘Cities, in effect, will become competitors for the top talent that, in turn, attracts businesses. To satisfy this new breed of citizen and so expand their tax bases, South African cities will have to see them as customers. One very crucial area where the public sector either needs to employ highly skilled information workers or to leverage the private sector’s capacity is data processing and analysis. 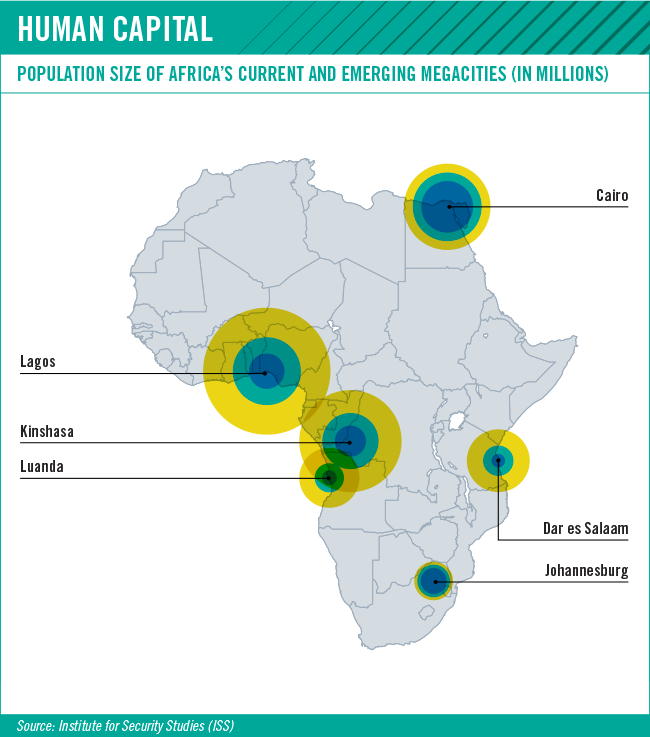 ‘Once the IoT becomes commonplace and billions of data packets are sent every day, it will be increasingly important to process, analyse, or synthesize the data to provide useful insight, make better decisions, inform policy, generate solutions, react to situations, or trigger any of the multitude of actions that might enhance citizens’ lives.’

Johannesburg is already rising to that challenge. The city has collaborated with Intervate to launch a suite of free, downloadable Smart Citizen apps that enable citizens to interact with local authorities on different utilities – from water to electricity, roads and emergency services. Citizens then report issues and provide a photograph and GPS location of the issue, supplying authorities with information.

‘As our tagline says, you can’t have a smart city without smart citizens, so we’re providing the citizen engagement part of the larger smart city solution,’ says Marc Fletcher, Intervate marketing and business development head. ‘This starts at a basic level with infrastructure and connectivity, with the goal of building a truly digital city.’

We’re already 17 years into the ‘century of the city’. In 17 years’ time, half of all Africans will be living in cities. For SA, this presents an enormous positive opportunity – and one that the country and continent cannot afford to miss.