In September, the ground for a new mall was broken in Mamelodi, Tshwane. Over the next 15 months, Mamelodi Square will be built on the site of a former bus depot, with tenants such as Shoprite, Capitec, Clicks, KFC and Pepkor already confirmed. Nothing out of the ordinary – except that it represents a significant vote of confidence following the civil unrest in KwaZulu-Natal and Gauteng barely two months earlier, which caused 337 deaths and knocked R50 billion off GDP as warehouses, schools, factories, banks as well as 112 shopping centres were looted, damaged and set alight.

The damaged Mams Mall, for example, is just 6 km away from where the new Mamelodi Square will employ 420 local workers during construction and 950 permanent workers on completion – creating employment at a time when 150 000 jobs are at risk in KwaZulu-Natal alone because of the riots, which led to some businesses not returning to the affected areas.

The developer of Mamelodi Square, McCormick Property Development, had five out of the 23 malls in its JSE-listed Exemplar REIT portfolio damaged, and needed to physically defend its flagship Tembisa Mall against looters. Yet the company was quick to reconfirm its belief in SA, pledging to rebuild and continue investing in rural and township malls. According to Exemplar CEO Jason McCormick, mall owners will be rebuilding with stronger perimeter fencing, barriers and private security in place, while also rethinking their building design (closed malls are less vulnerable to looting than those where shops open directly onto the parking lot).

The scenes of mass looting and public violence, which broke out in July after the arrest of former President Jacob Zuma, were reportedly orchestrated with military precision. The N3, N2 and N7 near Durban were closed as protesters set alight 37 trucks, including a fuel tanker and a car carrier. Some industry organisations were in discussions about armed, secure convoys to protect trucking in order to restore their interrupted supply chains.

‘Multiple of our customers’ trucks burnt during the riots,’ says Gert Pretorius, executive VP of MiX Telematics and MD of MiX Africa. ‘Where possible, we assisted clients with data on the high-risk areas so that they were able to avoid routing their trucks to the affected areas.’

The demand for real-time telematics vehicle-tracking solutions has increased since the unrest, says Pretorius, who notes that many clients requested tracking-and-recovery services to keep a closer watch on their fleets when they entered high-risk areas. ‘MiX is in the process of building an app that will enable clients to log certain incidents on a map in real-time, which will allow for quicker action by the industry.’ 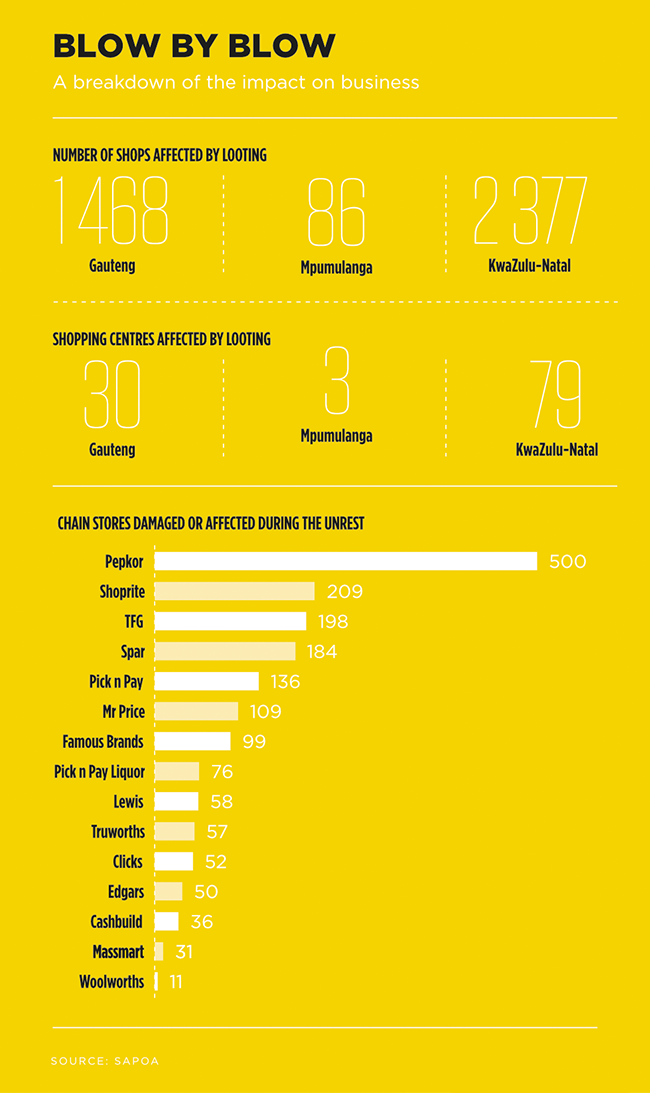 Some of the alleged riot instigators have since been arrested, and huge numbers of citizens volunteered to clean up the destruction, with social networking groups such as #RebuildSA and #UnrestSA attracting nearly 50 000 followers, each of them wanting to rebuild. In Durban, where ransacked shops lost R1.5 billion in stock, the Chamber of Commerce and Industry partnered in several initiatives to provide immediate short-term as well as long-term relief to affected businesses.

‘Part of our short-term relief strategy has been the setting up of various task teams that focus on food relief, policy and advocacy, the fast-tracking of insurance claims for those in the informal sector who were not insured, where we are working with our corporate members to help with funding applications and sponsorships,’ says Durban chamber president Nigel Ward. ‘The government and other entities have rolled out several relief mechanisms to help businesses rebuild. While supply chains have not been fully restored, we are positive that current programmes to help businesses reopen their doors will yield positive results in the long run. We are not aware of any shopping centre properties that will be pulled down at present.’

The chamber established the Durban and KwaZulu-Natal Resource Tracker to connect people to resources and information in real-time, together with Trade and Investment KZN and PISTA, a research and design practice. In another initiative, the chamber partnered with Coaches and Mentors of SA and Zoe-Life, offering one-on-one coaching to help its members deal with the stressful situation. Small-business owners and their staff have faced particular challenges in coming to terms with returning to service the same communities that had attacked and looted their businesses.

All in all, SA business is ‘totally committed’ to restoring the affected areas and has been working closely with the government on the response, according to Busi Mavuso, CEO of Business Leadership SA (BLSA) ‘The damage, though, was severe. Shoprite, for example, will not be reopening six of its 231 stores that were damaged, while about 80 are still closed,’ she said in early September. ‘The Foschini Group had nearly 200 stores damaged and planned to reopen all of them by end-October – that’s four months of trading losses. Other retailers were similarly affected; their stores were stripped bare and they have to replace stock as well as shop fittings and repair damage to property. This is expensive and these companies will be unable to recoup their losses.’

The retail group with the highest losses, Pepkor (which employs 50 000 people at PEP, Ackermans, Tekkie Town and other quintessentially SA companies) expected to have about 350 of its more than 500 looted stores back in operation by end-September. The group says that the staff teams in its operating companies were working around the clock to reopen the remaining shops as quickly as possible.

Pick n Pay (PnP) highlighted the dedication of its staff members, franchise partners and other stakeholders in cleaning up and rebuilding the group’s 136 damaged PnP and Boxer supermarkets and 76 liquor stores, as well as two distribution centres. At the time, PnP’s new CEO, Pieter Boone, commented that ‘last week I said that South Africa was bloodied but unbowed. This week, everywhere I have been, I have seen the strength and determination of people to rise from the crisis and build a better tomorrow’.

Mavuso also speaks of rapid results in the short-term emergency response, which saw organised business working closely with the government. ‘In the immediate aftermath of the unrest, President Cyril Ramaphosa briefed business leaders, acknowledging the importance of collaboration to address the crisis,’ she says.

‘Then, through business and government dialogue, a matrix of sector-specific challenges and concerns was drawn up. It identified problems at a granular level that needed to be addressed, ranging from port delays in Durban and securing essential supplies to connectivity for residents in affected areas. Each factor was graded for the impact it was having on specific sectors.’ Mavuso adds that the matrix outlined solutions for each problem, with responsibilities delegated among various government and business entities.

‘The immediate priority was security and restoring law and order, followed by securing essential supplies including medical supplies. For that, we saw close co-operation between the government and the retail, pharmaceutical, agricultural and other sectors. Similar collaboration resulted in providing relief measures by getting food and medical supplies to those in need,’ says Mavuso. 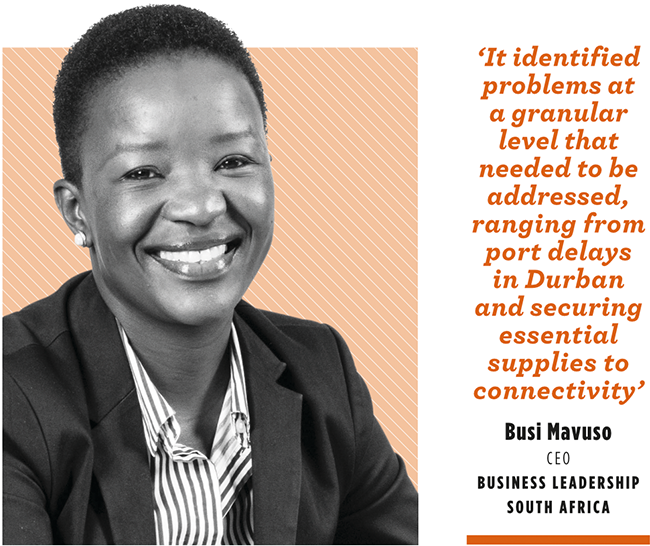 The unrest interrupted the government’s COVID vaccination roll-out and prevented pharmacies in KwaZulu-Natal, Gauteng and Mpumalanga from dispensing medication and providing important primary healthcare services. More than 90 pharmacies were destroyed beyond revival, according to the South African Property Owner Association (SAPOA). The Independent Community Pharmacy Association turned to the COVID Business Rescue Assistance (Cobra) to help with fundraising R20 million to support member pharmacies in repairing, rebuilding and restocking their businesses. By mid-August, nearly R8 million had been raised through donations from pharma companies. In addition, Cobra partner organisations, including management consultants, lawyers, financial advisers and IT experts, offered business support to the damaged pharmacies.

While the larger companies across all industry sectors are currently rebuilding and replacing lost stock, many of the affected SMMEs don’t have the resources to do so, especially as many are not covered by the South African Special Risk Insurance Association.

‘Several SMMEs were already struggling due to the COVID-19 pandemic, the unrest caused further strain on many more businesses and thus threatening their sustainability,’ says Ward of the Durban chamber. ‘We believe support needs to be focused towards the uninsured SMMEs. Furthermore, we believe that this support needs to be easily accessible by small businesses and inclusive.’

SAPOA, whose members own 90% of SA’s commercial real estate, has lobbied for – and achieved – municipal rates relief of up to 75% for impacted properties. In addition, SAPOA CEO Neil Gopal says that the Department of Trade, Industry and Commerce and the Industrial Development Corporation in partnership with the Gauteng government have agreed to assist with funding for the SMME tenants and informal traders.

However, more action is needed, he says. ‘We require government, and in particular, the municipalities to give immediate attention to the unsustainable increase in property rates; the unsustainable increase in water and electricity costs; the interruption of electricity due to load shedding; the collapse of infrastructure around our assets; the dysfunctional state of many of our municipalities; and the levels of corruption at local level. Without a concerted effort to address these, I can assure you no new money will flow into developments.’

Just before the unrest, business confidence had been at its highest level in three years, according to the SA Chamber of Commerce and Industry Business Confidence Index, which dropped from 97 points in May to 93.2 in July. ‘But it’s not only “perception” and confidence that got hammered by the unrest – the damage to the real economy was severe,’ says Mavuso. ‘Look at our July manufacturing figures – Stats SA data shows that in July, […] output shrank 4.1% year-on-year.

‘Having said that, because the unrest was a finite event that has failed to materialise again, and because the response in the after-math by the government and business – as well as other social partners – was so strong, we believe we can restore investment confidence in South Africa. We’ve shown that SA is committed to the rule of law. We hope this ugly chapter in our history is behind us.’

To build investor confidence, Mavusa says SA needs to show an unwavering commitment to instituting the Economic Reconstruction and Recovery plan announced by Ramaphosa last October. ‘Only by successfully implementing those reforms can we hope to build a growing, inclusive economy that creates jobs. Local and foreign investors have become weary of grand plans and promises that do not materialise into reality. Successful implementation is critical.’

This may be the key to SA’s successful recovery from the riots and to spark hope through new investments, such as Mamelodi Square.