Since 1999, trade relations between the EU and SA have been solid under the bilateral Trade Development and Co-operation Agreement, which established a free-trade area that covers 90% of bilateral trade between the two regions. Today, the EU remains SA’s biggest trade and investment partner.According to the European Commission, SA’s exports to the EU are growing and becoming more diverse. The EU also represents the most significant source of FDI into SA, with EU-based companies investing in a wide range of economic activities and contributing significantly to SA’s industrialisation and transformation agenda.

While several SA companies have enjoyed degrees of success in Europe and the UK, including Investec, Old Mutual, Discovery, Mediclinic and Distell, it is European companies that have consolidated gains through SA investments. Historically speaking, the mining industry has served European investors well, generating solid returns – as has the automotive manufacturing sector, with many companies using SA to manufacture for both local and foreign markets. Banks and insurance companies have also done well here. More recently, telecoms companies such as Vodafone and Vodacom, along with media and technology firms, have made significant investments in their relative sectors. And, given that Africa is still developing in terms of data penetration rates and internet access, a lot of untapped potential still remains in this segment. Business services and financial services are yet another two areas that attract significant FDI.

Schalk Barnard, Africa business development leader at EY, believes the reason some companies have been successful is because of their ability to ‘see through the short-term clutter and noise, and have a steadfast commitment to the long term’.

According to Christie Viljoen, economist at PwC’s Strategy&, ongoing investment into SA by European automotive manufacturers in particular is a cornerstone of the local industry’s development. ‘Vehicle exports generated R165 billion in export revenues for South Africa last year, accounting for almost 15% of total export receipts. Vehicle and component production also now account for nearly one-third of total manufacturing production in the country,’ he says.

With so many companies finding SA a favourable destination for investment, and across such diverse sectors of the economy, what is it about the country that attracts their attention? According to Barnard, in the context of Africa, ‘South Africa has the most advanced infrastructure, making it relatively easy to set up regional headquarters here and use the country as a base for the rest of the continent. It has the most regular transport links and the ability to cost-effectively shift products around and launch new services’. He adds that SA ‘has the continent’s most diverse economy, so it is less subject to commodity dependency than most other sub-Saharan African markets’. However, he notes, a lot depends on policy and intent – an area where SA has lagged behind its African peers over the past decade. 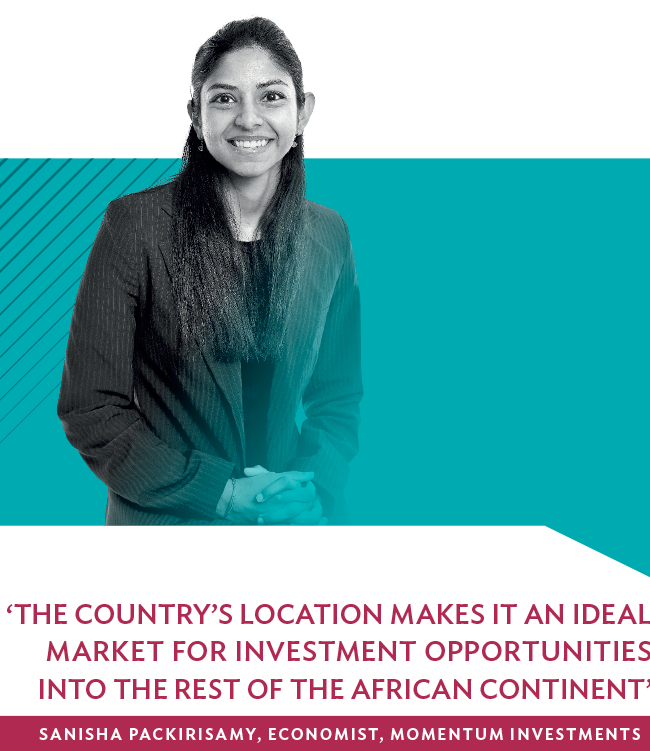 Sanisha Packirisamy, economist at Momentum Investments, points out that, compared to some other emerging markets, SA still has a high market potential, given its democratic standing and developed infrastructure. ‘The Africa Competitiveness Report in particular highlighted South Africa’s excellence in financial market development, business sophistication, innovation and technological readiness,’ she says.

Packirisamy adds that ‘the country’s strategic geographical location makes it an ideal market for investment opportunities into the rest of the African continent’. The country also has much more affordable labour than Europe – less than half the cost of European countries for professional jobs and one-third of the labour cost in Europe for manufacturing jobs, according to the Department of Trade and Industry. SA also boasts deep and liquid capital markets as well as a sophisticated financial and legal framework, she says, while the incumbent government’s commitment to macro-economic reforms should lead to greater stability and growth potential over the longer term.

Kevin Cron, head of M&A at Norton Rose Fulbright, highlights what he calls some of the ‘softer’ reasons. ‘From a European point of view, there’s a commonality of cultural background, as well as a familiarity with English law and continental legal systems.’ SA is also seen as a useful and appropriate platform for headquarter-type companies looking to do business in Africa, he says, adding that SA has missed some opportunities here, as the current tax and exchange control regimes are not as welcoming as they could be. ‘A jurisdiction like Mauritius has deliberately gone out of its way to permit the setting up of companies that enjoy special status from a tax point of view,’ he says, also citing Rwanda as a good example of a country going out of its way to become investor-friendly.

In general, says Cron, it’s not difficult for companies to invest in SA. ‘There are requirements that need to be complied with from a company law and exchange control point of view but those are not onerous in themselves. They are fairly routine and foreign investors don’t find that a hindrance,’ he says. ‘The problem is not a legal or bureaucratic one, but more a commercial problem in the sense that, are we an attractive investment proposition at the moment?’ Certainly food for thought, as Cron explains that SA has no particular tax incentives that are given to foreign investors. ‘So, compared to other jurisdictions around the world, we are not particularly competitive in that regard. Exchange control, in practice, works well, but there is a still a negative perception – simply because of the existence of exchange control.’

Barnard says that an FDI analysis by EY shows that, despite sluggish growth and policy inertia, European investment into SA has risen over recent years. ‘Although capital levels have fallen, European investors are broadening the net, investing in greater projects across more sectors, and have largely moved away from extractives to more consumer-facing investments – in other words, away from mining and metals projects and towards financial services, telecoms, consumer products and retail,’ he says. 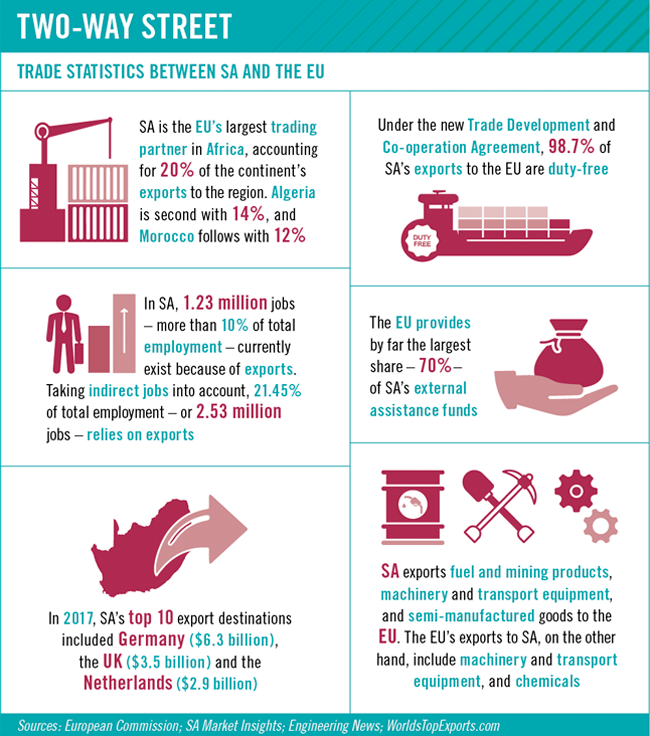 In the 2018 Ease of Doing Business indicator, compiled by the World Bank, SA stands at 82 (out of 190 countries), and has fallen behind Mauritius (25), Rwanda (41), Kenya (80) and Botswana (81) in the rankings. SA ranked poorly on the ability to enforce contracts, trade across borders, register property, access an electricity connection, and start a business (including the number of procedures, time taken and costs incurred).

‘In a competitive world, making the environment more business-friendly is essential to attracting new and continue investments,’ according to Barnard. Packirisamy agrees, saying that reducing regulatory uncertainty and removing barriers to entry ‘by increasing product and labour market competition could additionally improve access to the South African market’. She adds that several issues have discouraged investment into SA, including violent crime and corruption, which have ‘acted as barriers to investment’, along with rigid labour markets and an increase in violent strikes, which have ‘further deterred investment in recent years’.

Viljoen cites a Strategy& study that lists the top five factors affecting FDI inflow into upper middle income economies (such as SA) as trade openness; the burden of government regulation; the time and cost associated with trading across a country’s borders; safety and security considerations; and the strength of property rights.

Cron emphasises that government must appreciate what business needs. ‘It’s all good and wellfor the South African government to say they want to attract investment, and stimulate growth and employment. But they seem to have difficulty connecting the dots in the sense that, while this is the policy of government, it needs to feed through into the various areas that they want to encourage.

‘There has been much talk of creating economic free zones yet we have yet to see these coming through.’ But Cron believes we have to look even broader than this. ‘If we are serious, we need to relook the tax regime, the exchange controls, and even the BEE regime. We need to decide if we are happy to give exemption to foreign companies with the expectation that they may create opportunities for South Africans, instead of trying to dictate to business with what is becoming an ever-more-complex regulatory system.’

According to Cron, government is ‘talking the talk but not putting that into practice. One cannot compel investment by legislation; you have to attract investment by being competitive’.