Despite a rebound in the first quarter, following a broader improvement in confidence after the appointment of Cyril Ramaphosa as President, the FNB/BER Building Confidence Index fell by 14 points to 29 in the second quarter. This is the lowest since 2012, and means that ‘more than 70% of respondents are dissatisfied with prevailing business conditions’.

While the confidence of building contractors slipped to 37 points, reflecting a flat market, the index points to a significant drop in confidence to just 13 points (from 45) among producers of building materials. This sector, along with the broader retail sector, is arguably most tightly linked to confidence and economic growth.

There are nearly a dozen companies listed in the JSE’s building and construction materials subsector, and this lack of confidence is evident in share prices, which are all, with a single exception (Afrimat), at five-year lows.

Cement producer PPC is by far the largest of them all, with a market cap in excess of R10 billion. In fact, it is worth as much as the other companies in the sector put together.

In the year to end-March 2018, PPC reported revenue of R10.3 billion. Of this, R2.8 billion in revenue came from operations outside of SA, driven mostly by its operations in Zimbabwe. Beyond Zimbabwe, it has expanded to Rwanda, the DRC and Ethiopia in recent years. Operations commenced in this latter market this year.

Since 2014, PPC has invested more than R11 billion in capex locally, as it entered new African markets, and expanded existing operations north of the country. Its current capacity is 11.7 million tons per annum (mtpa), an improvement from the 8 mtpa as at September 2011.

The plants commissioned in Rwanda, the DRC and Ethiopia are part of its long-term strategy of becoming a ‘major player in the cement industry across Africa’. In Ethiopia, it will compete directly with Dangote, which commissioned its 2.5 mtpa plant near Addis Ababa in 2015. PPC’s plant at Holeta, even nearer to Addis Ababa, has annual capacity of 1.4 mtpa. The plant’s ‘future development plan’ includes an option to double capacity.

Cement producers in SA are battling a market where volumes were down between 3% and 4% in calendar 2017. PPC says it performed better than this, but that volumes were still lower than the previous year. Revenue growth is being driven by price increases. ‘South Africa’s landscape remains an economically challenging trading environment, with minimal GDP growth projected for the next 12 months,’ says PPC. The company also has a sizeable materials business, which operates in the readymix, aggregates, ash and lime sectors. 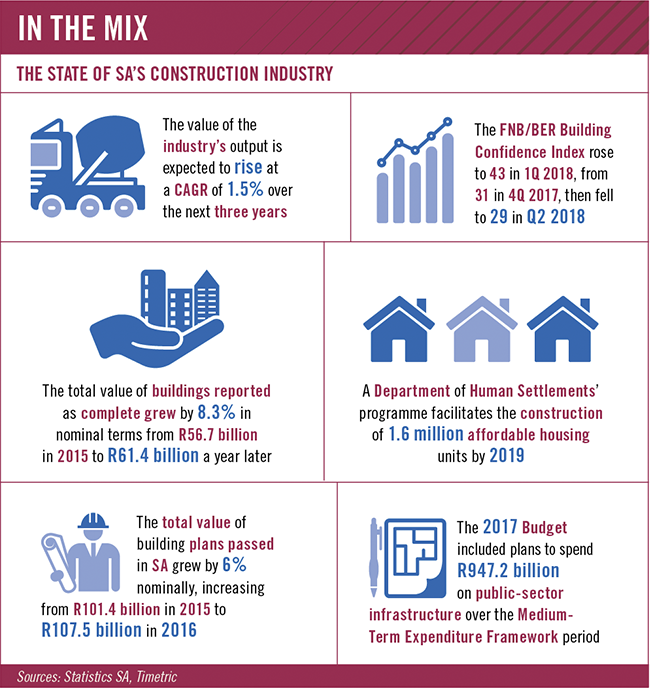 Smaller Sephaku Holdings has a market value of nearly R485 million. It owns all of Métier Mixed Concrete and a minority stake in cement-maker Sephaku Cement. The majority stake (65%) is owned by the continent’s largest producer, Nigeria’s Dangote Cement.

With annual capacity of 46 million tons, Dangote is nearly four times the size of PPC. Sephaku’s operations are small in the broader context of Dangote, though, with production capacity of 2.8 mtpa. But, its operations are sizeable in the local context, considering PPC’s capacity in SA (only) is 7 mtpa. In FY2018, Sephaku Holdings reported revenue of more than R3 billion, with R2.4 billion coming from the cement operations and R830 million from Métier. While the trading environment for building materials will remain challenging in the short to medium term, Sephaku forecasts positive ‘total demand growth’ – fulfilled by both domestically produced cement as well as imports – from 2019.

Niche readymix and aggregates business WG Wearne has been negotiating a recapitalisation of the group with its funders for most of 2018. In the six months to end-August 2017, it reported revenue of R213 million, with a tiny profit of R3.8 million. The delay in publishing full-year results saw the company’s listing annotated with ‘RE’ on the JSE’s trading system. Its results were not published by end-June, and as at time of writing, its listing remained suspended as a result.

Afrimat is the second-largest in the sector, with a market cap of R3.65 billion. This quarry operator has diversified very successfully and now has businesses spanning industrial minerals (such as lime, dolomite and quartzite); aggregates (road stone, concrete stone); iron ore; as well as the concrete bricks and blocks and readymix sectors.

Revenue in FY2018 increased by 10% to R2.5 billion, with 65% of this coming from the traditional aggregates/industrial minerals business, 25% from concrete units and 10% from its new iron ore mining venture, Demaneng.

At year-end (February 2018), it said that while there were positive growth signals, there is a ‘lag-effect’ of between 12 and 18 months in the market. It expects its concrete-based products unit to remain ‘under pressure’, but that the other two divisions would perform better. 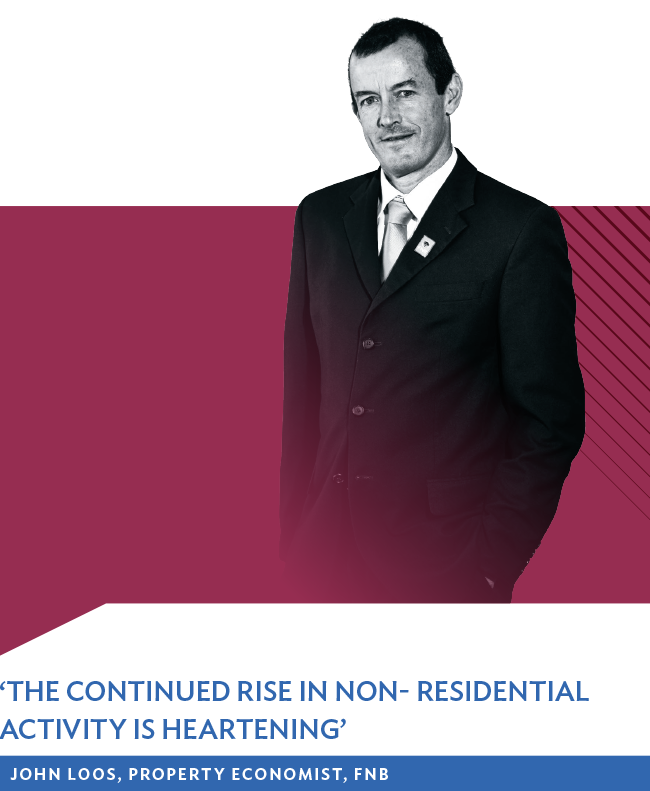 Brick producer Brikor, which listed on the AltX in 2007, has two manufacturing plants in Gauteng with production capacities to make more than 155 million bricks a year. Brikor also owns a clay and coal mine in Nigel. In its 2018 annual integrated report, it noted a 7% increase in revenue in the bricks segment from R167.6 million to R178.7 million. Gross profit in the group increased 12.5% to R74.3 million.

‘The results for the year under review reflect the final chapter in a number of consecutive years of realignment, consolidation, refinement and establishment of a sustainable foundation on which to grow the future business of the Brikor Group,’ says CEO Garnett Parkin in the report.

Distribution and Warehousing Network (DAWN) underwent its own restructuring in 2017, and exited debt free. Its market value is R294 million. Key to the turnaround was the sale of its 49% interest in Grohe DAWN Watertech for R324.5 million. It remains the master distributor of these products in sub-Saharan Africa. Master distributorships for a multitude of products – spanning the hardware, paintbrushes, kitchen fittings, sanitaryware and plumbing segments – make up two-thirds of the group. In hardware, the group distributes a number of well-known brands, including Bostik, Cadac, Duracell, Hilti, Lasher, Pratley, Stanley and Yale. Various manufacturing entities, primarily in plastics, comprise the remaining third.

Trellidor, a household name, is the most recent listing in the sector. It made its market debut in 2015. Currently, the group has a market value of R563 million. The listed holding company owns the Trellidor security barrier business as well as Taylor, which produces blinds and shutters. Both units manufacture all their products locally.

In FY2017, the group reported revenue of R525 million. It says, however, that trading conditions remain ‘tough’, particularly in Gauteng. It has been attempting to diversify its range in the Trellidor division, with these making up around 30% of sales. The ‘traditional’ Trellidor products still comprise the bulk.

Kaydav is the largest distributor of wood-based panels in the country and says that in 2017 ‘poor GDP growth negatively affected consumer and business demand, and with the industry already suffering from excess supply capacity, sustained downward pressure on selling prices was felt throughout the market’. The group reported turnover of R945 million in FY2017.

Mazor generated sales of R426 million in FY2018. In its 2018 integrated report, it makes the point that ‘while it is true that sentiment in the country is starting to pick up under new leadership, newspaper headlines are not sufficient to translate into positive growth in the construction industry. Clear policy from government, which can reignite business confidence, is needed in order for our industry to recover’, adding that the ‘outlook for the next two years is bleak’. 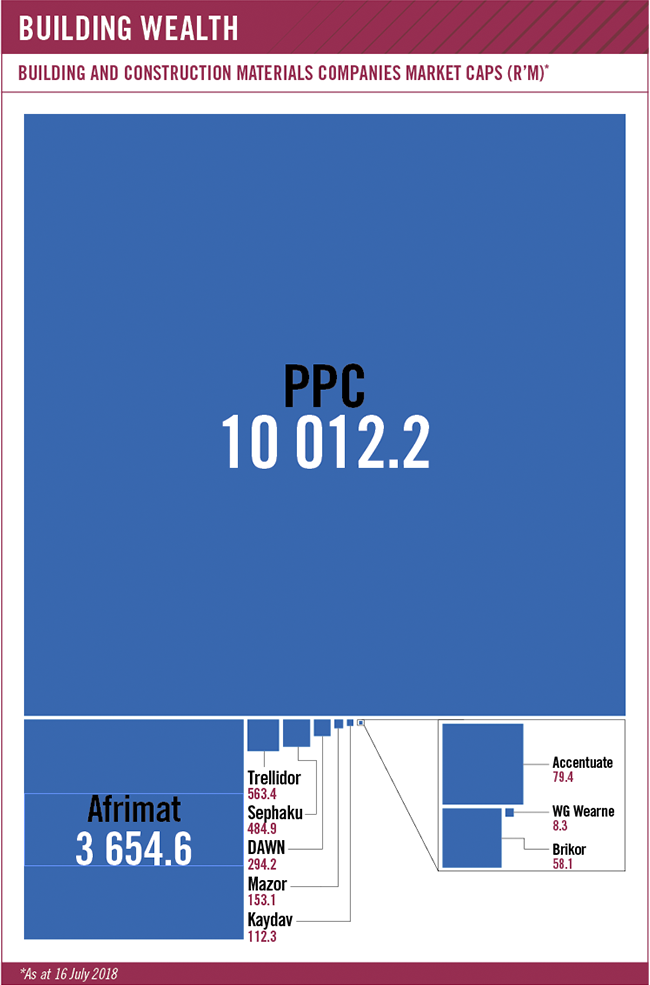 Smaller Accentuate, valued at R79 million, operates in two segments, namely flooring and environmental solutions. The flooring business, Floorworx, is the only manufacturer of vinyl flooring in SA. It contributes around 80% of group revenue. The remaining 20% comes from chemical blending unit Safic.

It says in its 2018 integrated report that although the economy remains ‘under pressure’, it is ‘cautiously optimistic for the remainder of the calendar year. A slight increase in activity is already visible’.

It must be noted that there are building materials businesses inside larger listed entities. An example of this is Building Supplies Group (BSG), which Invicta sold to Pepkor’s (formerly Steinhoff Africa Retail) SteinBuild unit for R678 million in April last year. Consolidated Infrastructure Limited also owns two small building materials businesses – West End Claybrick and Drift Supersand. In FY2018, this unit will report revenue of close to R500 million. PG Bison, which manufactures and distributes timber and wood-panel products, is owned by listed KAP Industrial.

Any improvement in the fortunes of the sector, however, will be driven by an acceleration in economic growth over the medium term.
John Loos, property economist at FNB, says that ‘the continued rise in non-residential activity in the second quarter is heartening. However, this was offset by a noticeable fall in hardware retail sales, hardware manufacturing production and subcontractor activity. This suggests slower overall growth in the building sector this quarter’.

The outlook is also uncertain, he adds. ‘The mixed results from the building pipeline suggest that if there is any upside potential for the remainder of the year, it will be limited. Also, there is little macroeconomic evidence to suggest that the rise in non-residential building activity seen so far this year will be sustained.’