Seemingly, SA and Australia are very similar. Both were once British colonies. Both had gold rushes. Both bask in southern hemisphere sunshine. Both cheer sports teams wearing green and gold. You’d think, then, that businesses from either country would enjoy seamless expansion into the other’s market. Yet, as Germien du Plessis, the Sydney-based corporate finance representative for investment banking firm Bravura, pointed out in a recent article – that’s not necessarily always the case.

‘The Australian market is not as similar to South Africa as one would think. While we share a lifestyle and English as a business language, the Australian psyche differs significantly from South Africa, and the structure of the market is different,’ Du Plessis wrote. She added that, while South Africans may have a good turnaround track record on home soil, ‘it becomes significantly harder to attain the same results in a foreign environment, with a foreign workforce characterised by significant cultural diversity’.

Certainly, SA retailers such as Truworths, Pick n Pay, Clicks and Pepkor have had mixed success in Australia, leading – as Du Plessis put it – to the perception in some quarters that Australia is a ‘difficult’ investment destination. ‘We don’t believe this perception is accurate. There certainly have been hard lessons learnt, but there have also been many successful Australian acquisitions by South African corporates.’

Du Plessis listed success stories across industries, like Metro Cash ‘n Carry, which turned Australian retailer Davids from a loss-maker into a market leader. Or Nando’s, which after a difficult start has grown to more than 270 stores in Australia; Bidfood Australia, which is ranked among Australia’s top 200 companies; or Dimension Data and Datatec, which have completed numerous successful acquisitions in Australia’s ICT sector. Murray & Roberts, meanwhile, has cemented itself as a leader in Australian mining services through its acquisition of construction firm Clough.

The Metro Cash ‘n Carry story, while relatively unknown in SA, has passed into Australian business school folklore. The SA firm acquired Davids in 1998, rebranding it as Metcash. As authors Matthew Kidman and Alex Feher tell the story in their 2008 book, Master CEOs: Insights from Australia’s Leading CEOs, Davids was ‘in a dismal state, on the verge of announcing a A$240 million loss, and needed to be recapitalised in a hurry’. (Former Metcash CEO Andrew Reizer tells it even better. ‘When we arrived from South Africa we worked out that Davids was about 3 million times worse than we thought.’) The turnaround was staggering: by 2002, Metcash’s share price was up 110% over the 12 months to August, and the company was reporting net profit growth of 76%.

Du Plessis – who in her role at the Bravura Group has advised several SA businesses regarding their entry into the Australian market – wrote that the choice of sector is key when looking at Australian investment. ‘We believe that Australia offers a particularly good fit for South African ICT and financial services businesses, as well as industries that rely on technology, have a high degree of automation or have inputs that are import related. In ICT and financial services specifically, a tech-savvy and solutions-driven customer base makes Australia a hub for innovation, and there are significant opportunities for investment.’

Many of those opportunities lie in property. Inevitably – given that about 46% of its value is now in overseas markets – the SA-listed property sector has significant exposure in Australia. In mid-2017, the biggest portion of offshore exposure by market cap was in Eastern Europe (15.9%), followed by the UK (14.8%). Australian exposure (4.3%) was only slightly less than Western Europe (4.7%) and the US (4.4%), and well above African exposure (1.5%). 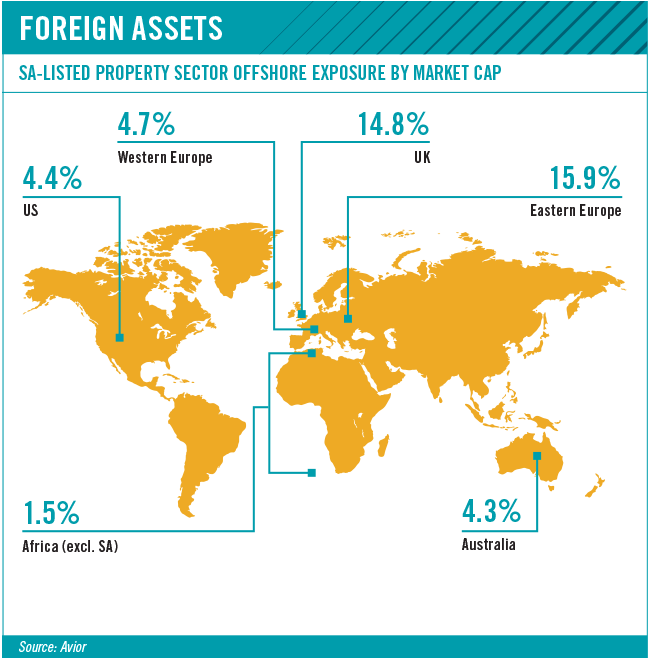 Growthpoint Properties, the largest locally based property stock on the JSE, recently confirmed that it wanted 30% of its bottom line derived from offshore sources, and had chosen to invest further in Australia. As part of this investment, its subsidiary Growthpoint Australia bought 18.16% of Australian real estate investment trust (REIT) Industria from 360 Capital FM for A$68.1 million.

Investec, meanwhile, continues to enjoy success in Australia, following the October 2013 listing of Investec Australia Property Fund (IAPF) on the JSE Main Board. ‘IAPF is a unique investment opportunity, offering South African investors direct exposure to the Australian property market and currency,’ Sam Leon, non-executive director of the Investec Property Fund, said at the time. ‘The objective of the fund is to invest in high-quality, sustainable and well diversified real estate in Australia. At the outset, the fund is a solid, sustainable platform that is well positioned for growth.’

The fund – which is marketed as the only way SA investors can gain pure exposure to Australian real estate through the JSE – has delivered on that promise: between listing in 2013 and November 2017, IAPF delivered a total return of 67.8%. CEO Graeme Katz told Moneyweb last November that the company’s solid earnings were testament to its strategy of acquiring quality real estate assets, backed by solid property fundamentals, proactive asset management and investing in Australia’s growth market. ‘IAPF remains a compelling investment opportunity in an Australian REIT that is developed and stable,’ he said. ‘Australia’s resources boom has now shifted to production and net exports of commodities are now a strong contributor to economic growth.’ 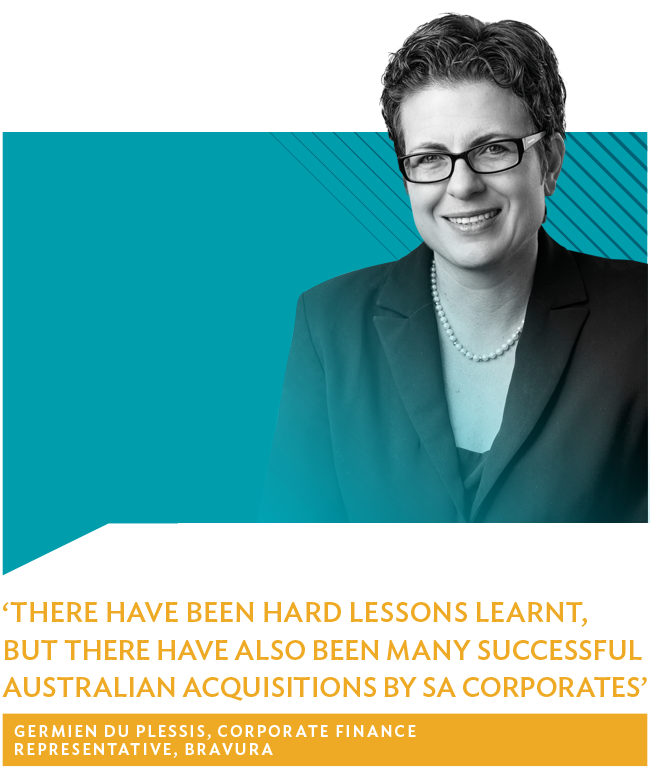 While some SA firms struggle in Australia and others succeed, there’s a lesson to be learned from the case of Orion Minerals. The Australian base metals exploration firm listed on the JSE’s Main Board last September, aiming to expand its fundraising opportunities and improve its access to development capital in SA. Orion confirmed that it is conducting drilling programmes at the Prieska zinc/copper project (previously owned by Anglovaal) in SA’s Northern Cape, spending R20 million a month on a massive exploration project. Speaking about the quality of the remaining resources and the mineral prospectivity of the 1 800 km² land package, Orion chairman Denis Waddell told the media: ‘It’s staggering that there’s been very little exploration in this whole very prospective area for 30 years. It would attract so much interest in Western Australia if you could transfer it there.’

For Australian firms, SA offers a gateway into the broader African region – and vice versa. Shortly after its first restaurant opened in Rosettenville, Gauteng, in 1987, Nando’s expanded to Australia in 1990. After a difficult start – which required a restructuring of the Australian business – Nando’s Australia turned around, eventually becoming a household name in the country. Nando’s has since opened restaurants in Malaysia (1998), New Zealand (2000) and Singapore (2010), using Australia as its springboard into the Australasian region.

The Commonwealth Bank of Australia (CBA) is hoping for similar success in SA. CBA announced last September that it would officially enter the country’s banking sector after its unit TymeDigital won a banking licence from the South African Reserve Bank. A digital-only bank, TymeDigital is expected to become a source of broader research and development for CBA, and a foot in the door of the wider African market.

It will take heart from the success of Australian retailer Cotton On. SA has rapidly become one of the group’s strongest markets, reporting double-digit growth every month in the five years after it opened its first SA store in 2011. Just three years later, in 2014, Cotton On launched regional headquarters in Johannesburg and opened its 100th SA outlet, lauding the region as the fastest growing of all 17 countries in which it operates. ‘South Africa is rich with talented, innovative and forward-thinking individuals,’ Johan van Wyk, Cotton On South Africa country manager, said at the time.

Tellingly, he added: ‘Our team here plays a crucial role in shaping why South Africa is set to become a driving force in cementing our plans for future growth, both within Africa and beyond.’