A spotlight is being focused on the issue of ethical behaviour in SA business, particularly in light of recent events that have brought various companies into serious disrepute, making integrity and ethical practices paramount to the development of the country’s economy. FR Robinson and Renate Scherrer discuss the intricacies of corporate ethics.

FR Robinson, executive director of Infinitus Reporting Solutions
The best place to start building sustainable businesses is fixing the systemic issues that have brought our professions into disrepute and future-proofing them against further potential damage. Let’s ensure integrity is the cornerstone of our businesses.

Locally and internationally, the headlines of late have been disheartening, from politics to environmental news and even within the financial and accounting professions. Many firms have come under fire – whether for failing to uphold professional standards or even being implicated in accounting or auditing scandals.

Some of the responsibility they’re shouldering may be fair; some might not. But in this age of ‘alternative facts’ and social media, protecting our integrity is more important than ever before, both as individuals and collectively in businesses.

Global accountability
It’s important to understand that business integrity is a collective endeavour. Everybody has a role to play – regardless of the job description or level of power. At an organisational level, ensuring integrity means everyone is willing to keep each other in check – and to be kept in check. Too often, sole responsibility is placed on leaders. While they do shoulder great responsibility, employees and shareholders need to realise they are also responsible for maintaining and protecting a business’ integrity. A collective is required to weed out blind spots. In the financial world, structures must be built where integrity can flourish through focusing on objectivity, impartiality and independence. Greater transparency must be pursued. As openness increases, there will be fewer ‘dark places’ where confusion and dishonesty can grow. 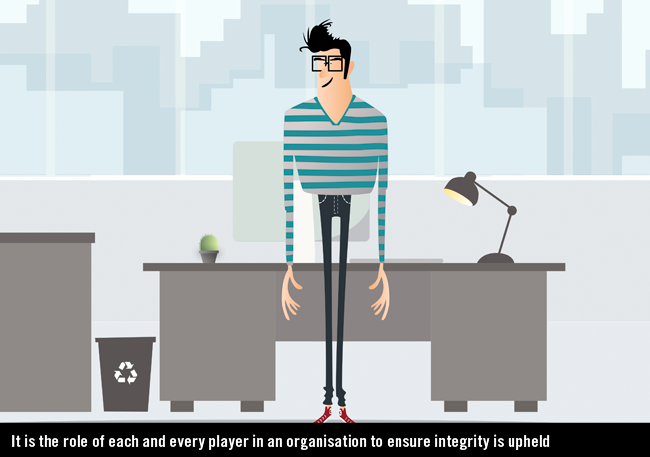 Checking the figures
Any decent data scientist or accountant understands the importance of clean data in drawing useful conclusions. Dirty data muddies the water and makes room for unnecessary mistakes as well as deliberate obfuscation. As the saying goes, the ‘numbers don’t lie’. But if the numbers are not accurate and clear, sometimes they might as well. When figures are simplified by cutting out the clutter and working only with relevant, clean data, the numbers can flag potential problems that can be dealt with swiftly and efficiently. If, however, the data is inaccurate and the key metrics are unclear, there’s a risk of missing the red flags, opening companies to potential data manipulation.

Building a smart bridge
Even the most competent people can make mistakes, so to protect an organisation from human error, it’s wise to invest in experts and systems that provide a measure of automation and independence. This is easy to do in a number of functions, including finance, operations and HR.

For example, automating various HR admin processes can protect against preferential treatment or the perception thereof. Similarly, automating key aspects of an organisation’s financial reporting can help weed out common issues such as Excel formula corruption, version control on documents and, ultimately, the misstatement of numbers.

When it comes to business integrity, actions speak louder than words. To prioritise business integrity, it’s not enough to simply say the right things – they must be followed through and executed. This is no easy feat. It means meeting commitments, treating everyone with respect regardless of their rank, and putting in the time and effort to build and maintain trust between leaders and employees, partners and shareholders.

Success without integrity is not true success. It also leaves companies vulnerable when things go wrong. To state what every good leader already knows, integrity remains the true mark of leadership – the focus must be brought back into organisations and professions.

Renate Scherrer, clinical psychologist And MD of JvR Consulting Psychologists
With millennials increasingly beginning to occupy the top organisational positions, it is important to consider and understand the impact this may have on the manifestation of unethical behaviour in organisations.

Eye of the beholder
One could argue that, as leaders, millennials will increasingly craft company cultures where the greater good is more important than individual needs. Their higher sense of social consciousness may impact their discernment of what constitutes ethical versus unethical behaviour. This was highlighted in an analysis of the generational differences in responses to the National Business Ethics Survey in 2015, in which millennials, as a generation, were found to be at highest risk of non-compliance due to turning a blind eye to certain questionable behaviours. It seems they simply don’t put the same value on different forms of unethical behaviour and will ignore misconduct, especially if it saves jobs, therefore deciding that the end justifies the means.

Slippery slope
Put together, those small ‘ends justified’ unethical acts can lead to bigger negative outcomes. In fact, many executives who end up facing the consequences of their poor ethical decisions will admit that it started small – bending just a few ethical guidelines without intending to hurt anyone. Then, along the way, rationalisation helps recast unethical acts as justifiable and it becomes more acceptable. When new employees join the organisation, they are socialised regarding the way business is conducted and, together with rationalisation, this then leads to the acceptance and perpetuation of unethical behaviour. 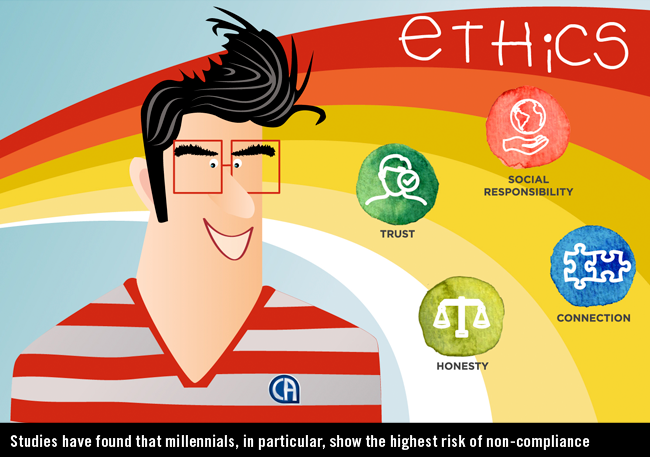 Managing risk
If business understands the drivers of unethical behaviour for millennials, it may help prepare for and manage the potential future risk thereof. If their unethical behaviour is not necessarily fuelled by the emphasis on self-gain but rather stems from the intention of helping others; if their approach to work life translates into a flexible implementation of business rules; and if they question the way things are done because they need their work to be meaningful − then that understanding can be incorporated into leadership development initiatives.

The need for trust and transparency from their environment are millennial strengths that should be capitalised on when it comes to positioning and developing these future leaders as custodians of ethical behaviour. Suggested actions include:

Help them shine
‘Power reveals who you really are,’ as the saying goes. In the case of millennials, it may in fact prove them to be the more caring and responsible generation that will ultimately deal with ethical dilemmas with a human touch. They will hopefully be the generation of leaders that take a stand against toxic, profit-only, power-hungry organisational cultures. Perhaps, in the face of ethical predicaments, they will succeed in rationalising less, being more transparent and consistent, and ultimately acting in ways that enable ethical behaviour and have a lasting positive impact on the interests of all organisational stakeholders.