With Regent Seven Seas Cruises, itineraries in the Mediterranean incorporate several ports of call and the unique offer of free unlimited shore excursions is part of an all-inclusive rate

Cruising on the Med is on the bucket list of many travel connoisseurs. Perhaps it has something to do with the old-world charm of the cities, the cuisine and the ease with which guests can enjoy a kaleidoscope of experiences.

With its rich cultural diversity of people, languages and histories, the Mediterranean has numerous advantages over other cruising areas, says Janine Pretorius, owner of Encore Cruises, which has specialised in Regent Seven Seas Cruises for 21 years.

‘There’s no place else on Earth where you can cruise to as many countries within such a short period of time and sample as many experiences as you can in the Mediterranean,’ she says. Many of the ports are ideally suited to cruise passengers, promising something of interest for everyone, adds Pretorius. ‘Since Regent Seven Seas Cruises offers such value with its unlimited, free shore excursions at each port, guests are truly able to make the most of these stops.’

While the weather from April to late October is almost invariably ideal, she says the advantages of cruising in the Med outside peak periods are also alluring, considering the prospect of fewer crowds at the must-see attractions.

Regent Seven Seas Cruises takes care of every detail for passengers aboard its elegant all-suite ships as they travel to more than 450 destinations. Throughout the voyage, staff and crew deliver exceptional personalised service, for which the cruise line is renowned. It is also popular for its all-inclusive rate that, in addition to shore excursions, also incorporates speciality dining, premium beverages, room service, gratuities, entertainment, lectures and WiFi. 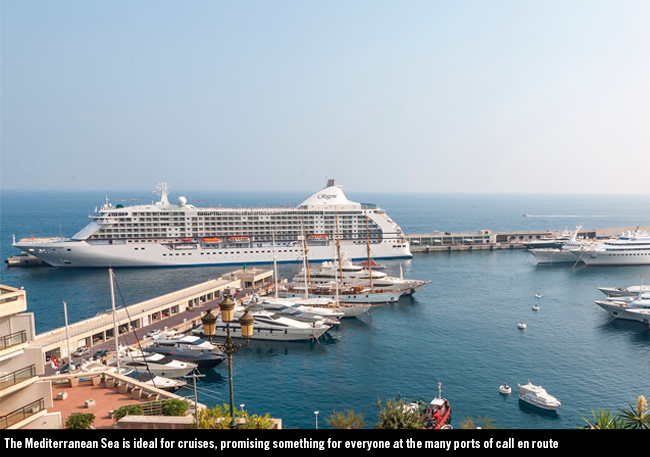 Fresh from its total refurbishment in October 2016, Seven Seas Voyager will sail the Mediterranean during its summer itineraries this year. Many of the seven-night itineraries include maiden calls at Korcula and Hvar (Croatia); Saint-Raphaël (France); and Lipari (Sicily, Italy); as well as calls at the region’s most fashionable destinations.

One such destination is Monte Carlo, which invokes images of jet-setting sophistication, glamour and all things chic. This tiny principality – the world’s second-smallest country – is an international capital of luxury set against a backdrop of yachts, Rolls-Royces, casinos and palaces.

For passengers partaking in the Regent Seven Seas Cruises shore excursions in Monte Carlo, royal aficionados can visit the state apartments and courtyards of the Palais du Prince in the city’s old quarter of Monaco-Ville. Built in 1191, by wealthy Genovese merchants and designed in the style of Louis XIV, the palace is the home and working headquarters of Prince Albert. Fans of the late Princess Grace may also want to see the Monaco Cathedral, where she married Prince Rainier.

For those seeking more action, the Beaux Arts-style Casino de Monte-Carlo features everything from European and English roulette to punto banco and baccarat. The complex also houses the Grand Theatre for opera and Les Ballets de Monte Carlo.

Alternatively, visit an exclusive venue to indulge in premier French wines alongside deep-fried barbajuan pastries and a locally made tapenade. Or take a picturesque drive along part of the route that follows the Formula 1 Grand Prix circuit.

Both itineraries include Florence, which is best explored on foot. Visit the Giotto bell tower and an astonishing array of statues, including Cellini’s Perseus, Ammannati’s Fountain of Neptune and Michelangelo’s famous David. Take in the Florentine architecture at the Piazza Santa Croce and stroll across the Ponte Vecchio (a medieval bridge that survived the attacks of World War II) to pick up a souvenir jewel from a shop lining the way.

Design enthusiasts will enjoy the Villa Durazzo, built in the 17th century. It is the summer residence of the Durazzo family, whose villas are filled with artworks from the Genoese School, Murano glass chandeliers (the likes of which can also be found aboard Seven Seas Explorer), majolica, frescoes and tromp l’oeil designs, complemented by citrus and seaside Italian gardens.

Another city that presents the best of the contemporary and ancient worlds is Istanbul – to which Regent Seven Seas Cruises returns next year. A selection of sailings aboard Seven Seas Voyager includes a 12-night Athens-to-Venice itinerary (departing 3 June 2019); an eight-night Rome-to-Athens sailing (8 October); a 10-night Athens-to-Barcelona trip (16 October); and a 31-night voyage from Athens to Dubai (16 October). 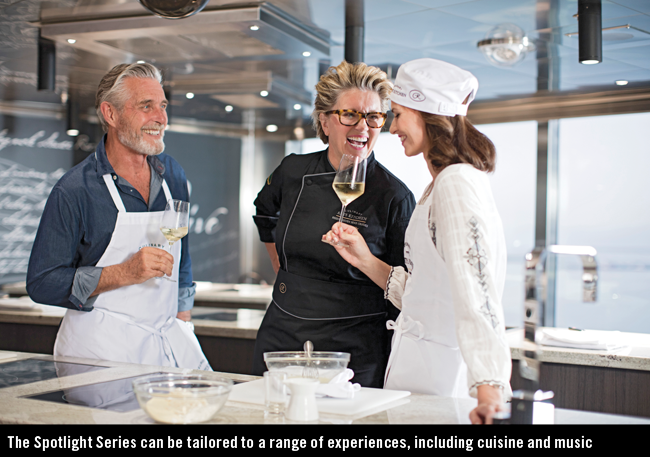 Shore excursions can see guests taking a Turkish bath at a hammam, or eating exotic meze (think smoked trout pâté with mustard and almonds wrapped in grilled leaves of oyster mushroom, or hot hummus with pastrami) paired with wines from the Tekirdag region at a tavern. And, of course, there’s the light show at Sultanahmet, and the majestic Blue Mosque, which incorporates the best of the Ottoman and Byzantine empires.

While passengers can join any number of complimentary activities, an additional selection of Spotlight Series voyages has a particular focus. Appreciate the music and dance of world-renowned entertainers, learn the fine art of pairing wine with food, or gain insight into world affairs, with former ambassadors, politicians and other notables. Experiences can be tailored to incorporate everything from cuisine and music to professional bridge and public broadcasting.

Those passionate about the culinary arts are invited to sail with award-winning Los Angeles chef Tommaso Barletta aboard Seven Seas Voyager on 20 September 2018 for themed Spotlight on Cuisine events featuring Italian and healthy cuisine.

Wine connoisseurs will not want to miss the Spotlight on Wine voyages, with calls to Rome, Venice, Monte Carlo and Barcelona. Regent Seven Seas Cruises has also paired with the renowned Castello Banfi wines for a variety of activities aboard select Seven Seas Voyager sailings, such as a shore excursion to the Italian-American brothers’ Banfi Estate winery in Tuscany.

For those who prefer more time to plan ahead, Regent Seven Seas (building on its tradition of being the most inclusive luxury experience in the world) will launch Seven Seas Splendor in 2020.

Be among the first to enjoy luxury perfected when it departs from Barcelona for Miami on 7 February for a 14-night sailing.