Since its inception in 2003 TUHF has funded more than 34 500 units – lending in excess of R4 billion to small and large property entrepreneurs. As TUHF heads towards its vision of a R5 billion loan book servicing every major city in our country, the organisation is set to list their first credit-enhanced Domestic Medium Term Note (DMTN) programme on the JSE. This follows 13 years of consistent loan book growth, with the last five years’ average year-on-year increase being more than 17%.

A rather unique organisation, TUHF sees the challenge of urban city decline as an opportunity to enable entrepreneurs – through the provision of finance – to regenerate neglected neighbourhoods. This is done via entrepreneurs refurbishing existing residential buildings or converting light industrial or office spaces into safe, secure and affordable rental accommodation with finance provided by TUHF.

Its focus is on reasonably priced income, mixed-use neighbourhoods; transforming rundown buildings into highest and best-use properties; and vibrant communities. Co-founder and CEO Paul Jackson explains that where others see decline, TUHF sees thriving property markets and the potential for families to live close to places of work, education institutions and modes of transport. In addition, small businesses with a wide range of activities spring up and thrive.

Some of the areas in which TUHF offers finance include Hillbrow, Berea and Jeppestown in Johannesburg; whereas in Durban their focus is in Albert Park and surrounds. Port Elizabeth sees them financing in central areas such as North End and Korsten. They have also recently opened offices in Cape Town and Bloemfontein. This makes TUHF the largest lender in inner city residential property and certainly ahead of the urbanisation curve, which is set to see 80% of the world’s population living in urban centres by 2050.

‘We see immense opportunity in our country’s bustling inner cities. The results speak for themselves,’ says Jackson. ‘Our teams are experts in local inner city markets with a key understanding of what makes inner city residential rental businesses tick – both for us and our clients.’

TUHF’s turf may seem risky, but after 13 successful years in operation and a footprint of five branches nationally, it is clear that the organisation is able to spot opportunity and potential where others may fear to tread. According to Jackson: ‘Our approach to risk is different to that of banks. We look at the person before the project. This forms part of our specialised character-based lending approach. Our professionals are intimately familiar with the areas in which we lend.

Currently TUHF is diversifying its pool of debt capital investors and implementing structures that allow for direct access to capital markets while improving its own assets and liabilities management in a reduced risk scenario. This is in addition to TUHF’s traditional investment options – on and off balance-sheet lending, joint financing and agency work.

In this vein, TUHF has announced its decision to issue corporate bonds into the debt capital market. In total it is expected that the DMTN programme will see debt instruments being available to investors to the value of R1 billion, which will be released to the market over the next three years in tranches of R350 million.

Unique to the TUHF DMTN is a R200 million credit enhancement that is made possible by the National Treasury’s Jobs Fund award to TUHF. In return, TUHF has committed to creating more than 12 000 jobs. This means that each of the three tranches of R350 million will be made up of notes to the value of R280 million and a credit enhancement of R70 million.

‘The TUHF DMTN programme aims to test the appetite of institutional funders for this kind of mortgage backed security,’ says Jackson. ‘The advantage of a DMTN programme is that it offers asset managers a listed and investment-grade rated debt instrument, which should appeal especially to those with mandates that do not extend to unlisted debt.

‘We expect the DMTN programme to expand our debt capital sources – moving to new financing structures, now that we have both the track record and the capacity to offer it confidently. We hope this credit-enhanced pool of assets will attract more competition for pricing and assets to reduce our cost of debt, resulting in a more competitive offering to TUHF clients.’ 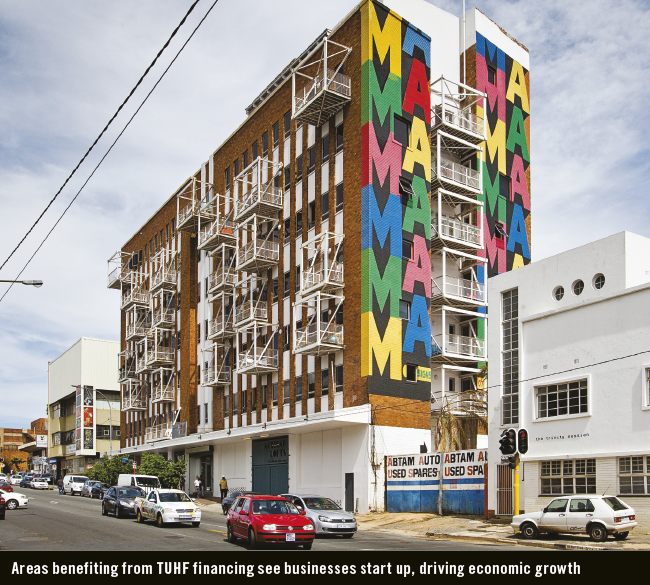 Confidence for potential TUHF investors can be taken from the company’s 13-year history, and a past financial year of record disbursements, reduction in arrears and record loan approvals – compensating for above-normal prepayments.

TUHF Limited is the TUHF Group’s main operating company. The holding company is TUHF Holdings Limited with shareholders made up of TUHF NPC, the National Housing Finance Corporation, Futuregrowth Asset Management and the Public Investment Corporation, apart from other TUHF companies in the group.

As an invested stakeholder in the cities in which it operates, TUHF actively co-operates with city strategies and initiatives. The organisation believes that it is better placed to contribute to the country’s National Human Settlements policy and its housing targets.

‘We are firstly a commercial entity, but also have some key development impacts to show. TUHF is proud to provide access to finance in areas and to people that would not ordinarily be financed by banks. We also stimulate job creation during construction and through property management, and the wide range of services needed at the buildings we finance,’ says Jackson.

Urban regeneration is a direct result of the introduction of a reliable source of liquidity into the inner city property market. ‘We have seen the property market respond with large and consistent increases in value. Areas like Hillbrow and Braamfontein are testament of this,’ he says.

Through access to quality affordable housing, people are able to reside within easy reach of their places of work, stimulating local economic development.

Lastly, urban regeneration as a result of TUHF’s finance sees fiscal impact affected positively through properties that previously had illegal or no water or electricity connections being restored, with payment for rates and utilities being made.

As the largest lender in its market niche, TUHF is making a significant contribution to the broader socio-economic developmental issues that SA faces. Where some have viewed the business as a philanthropic entity, its success – and that of its clients – proves otherwise.