Ideally, collectible assets should be rare or in limited supply, as their value depends largely on how coveted they are. But collectors’ tastes can, and often do, change unpredictably, and when the time comes to sell, a collection could be worth a mint – or it may be old news. While collectibles can make interesting alternative investments and may be a good way to diversify a portfolio, knowing which to acquire purely for love and which for future financial gain requires expert knowledge.

Indeed, experts warn investors of the danger of treating collectibles as they would traditional investments, as the collectible market is not a particularly liquid one and trends in collectibles are prone to change. While investors may consider collectible and luxury items as legitimate alternative investments, the experts advise that people collect what they love in the hope that the value will follow.

‘People should collect for the love of collecting rather than from an investment perspective,’ says Anton Welz, division head and auctioneer at Stephan Welz & Co. ‘We always like to say buy it because you love it, not because it’s going to be worth something. So collect because it’s what you want to do, rather than how much you might get out of it in the end. It’s more a store of wealth.’

Clyde Terry – owner of Clyde on 4th Antiques and Collectibles, and organiser of the annual National Antiques and Decorative Arts Faire and several smaller monthly fairs – agrees. ‘You should be collecting because it’s something you love and you want to collect. Over the years I’ve seen many people buy something simply because they loved it, and which, 20 or 30 years later, turned out to be a great investment,’ he says.

Investment buying is difficult, he adds, because you don’t always know where the market may go or what it might do, and thus ‘buying for passion is a better way to go’.

So just how healthy is the current market for collectibles in SA? According to Welz, this depends on which category you are looking at. 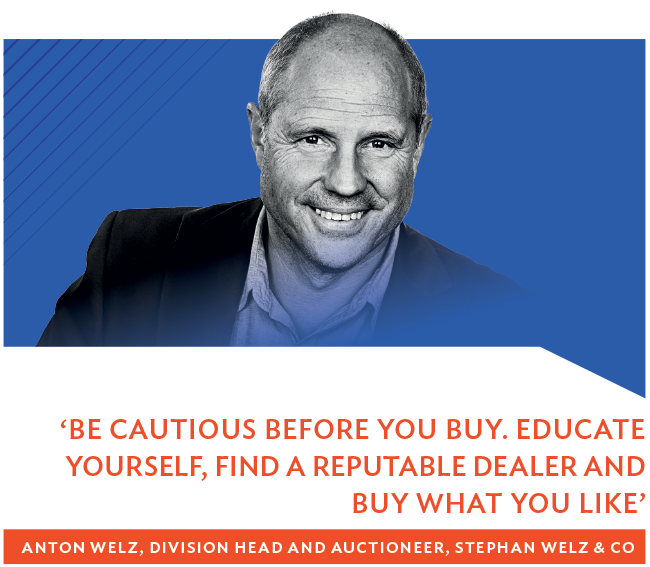 ‘Within each category – such as silver, ceramics, furniture, collectible cars, art, carpets, books and so on – there are fluctuations as to what is more collectible than not,’ he says, adding that fashion also dictates to a large degree. ‘If you take furniture, for example, 19th century brown furniture is currently very unfashionable. It’s probably at its lowest price ever. Conversely, mid-century modern furniture, 20th century design furniture is incredibly collectible. For an Eames chair made in the mid-sixties, you’ll get R70 000 on auction. But you’ll get R1 000 for a Victorian armchair.’

Commenting on how collectibles appreciate over time, Welz says that this also varies. ‘Vintage and collectible cars have increased in value more than any other category of collectibles in the last five years, possibly due to their scarcity. They are also tradeable, and internationally so, which may contribute to their value.’

At present, because the silver price is on the up, auction prices for silver have also increased, he says. Welz explains that there’s always a market for good Victorian jewellery and the big names in art will forever be desirable, ‘from traditional South African masters like Irma Stern, Walter Battiss and Alexis Preller, to newer ones such as William Kentridge, who is probably the greatest South African art export ever’. Young contemporary artists are also worth watching, he adds, citing photographer Zanele Muholi as an example.

The Citadel Art Price Index (CAPI) measures the change in the prices paid for SA art. It represents a broad spectrum of art and reflects trends in the prices of artworks that trade on auction. The index comprises 100 SA artists ranked according to the number of their pieces sold at several auction houses in SA and London over a rolling five-year period. In the August 2016 CAPI, Citadel head of SA portfolios George Herman says the CAPI100 was down 0.1% during the first six months of 2016, with the CAPI50 and CAPI20 showing stronger results. ‘During tough times, investors tend to go with what they know – the old faithfuls as it were – and hence the better performance of the top-selling artists,’ says Herman.

Citadel’s panel of auction houses had 17 auctions during the first half of 2016. In all, 2 340 lots were sold at a total value of R118.9 million. The number of lots sold declined by 14% against the same period last year, and total turnover value dropped by 21%. The average price per piece was R50 800, compared to R53 300 for the same period last year. ‘This metric has held up best among all the data series, providing a general sense of well-being for the overall South African art market,’ he says. The maximum price paid during the first half of 2016 was for an Irma Stern artwork, which sold for R4.5 million.

In Welz’s opinion, auction houses such as Bonhams in the UK have done well to put SA art and artists on the international stage. ‘They’ve given Irma Stern an international price point, along with a number of other local artists,’ he says. When it comes to collecting art, Welz likens this to investing in the stock exchange. ‘The way you might pick 10 companies from a share perspective, you might pick 10 artists. Some might go up and some may go down. You need to pick a few, research them, follow their prices and then start buying,’ he says. 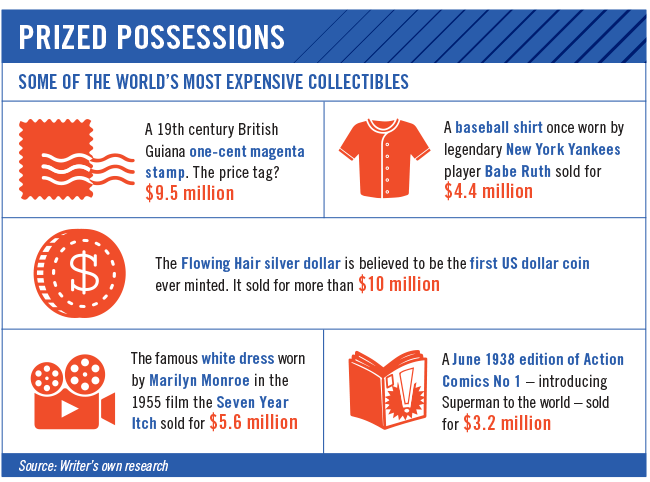 Another category of collectibles that sees great interest is coins and banknotes. John Keogh, a professional numismatist and owner of Keogh International, says carefully selected collectibles will outperform the stock market every time.

‘Collectibles are a moveable asset. If you have bought wisely with knowledge, they will show value in time,’ he says. ‘But collections should be bought for the love, not the value.’

Keogh believes that collectibles are so appealing because ‘people by nature are hoarders, so the thrill of owning something that nobody else has or something that’s very rare, or has an interesting use, is a big attraction’. It is the rarity of an item that gives it value, he adds. That and its condition.

One of the most valuable items to have passed through his hands was a pair of 1874 Thomas Burgers gold pounds, which sold for R3 million.

According to Keogh, the collectible coin and banknote market is generally a good one to be in as it is stable and global. ‘If you buy correctly and take the trouble to find out what you’re buying, it doesn’t matter where you try to sell the piece – you will get value for money,’ he says. But you must buy carefully, he cautions. ‘Find a dealer you like, trust and respect, and who you can work with over the years.’ Also, be sure to acquire the right coin at the right grade in order to retain value, he adds, and steer clear of promotional items.

The Krugerrand, launched in 1967, was the world’s first modern bullion coin – today it’s the most traded bullion coin globally. The idea behind the Krugerrand came about when the Chamber of Mines explored new ways to put its gold into the hands of ordinary people by making smaller pieces available at more reasonable prices. The avenue chosen was a gold coin: a one-ounce legal tender coin named the Krugerrand, which is produced by the SA Mint.

It comes in two forms: proof and bullion. The proof-quality coins are favoured by collectors as they are produced in limited quantities and come with a certificate of authenticity, while the bullion version is preferred by buyers looking to invest in gold.

Krugerrands are legal tender but their value is directly related to the value of their gold content. Thus, the price of a one-ounce coin is equivalent to one ounce of gold. However, given that the price of gold has increased steadily over the years, even as stocks and other investments fluctuated, Krugerrands are a fairly sound investment. They are also traded easily and internationally.

In addition to the Krugerrand, the SA Mint produces other collectibles, the most recent of which are the R2 and 2.5c tickey ‘dolos’ coins. The range celebrates SA inventions – in this case, dolosse, which are massive concrete blocks that protect harbour walls.

Investing in collectibles can certainly lead to significant returns, though not without some element of risk. Perhaps it is best to do as the experts advise and buy – first and foremost – for the love and appreciation of an item, rather than the monetary value.

As Welz says, ‘regardless of the category, if it is real quality it will retain its value, irrespective of what is it. But be cautious before you buy. Educate yourself, find a reputable dealer and buy what you like’.