Being fired for subordination from the Dutch East Indian Company in 1702 might have been a blessing in disguise for Willem van Zyl and his descendants. It allowed him unwittingly to sow the seeds for what would become one of SA’s most successful family-owned agricultural conglomerates.

While Willem farmed fresh produce, wine and livestock on the farm he bought in Franschhoek, his descendants left the Cape in the 1830s and eventually settled in what is now the Limpopo province. Today the Van Zyls still run their business – called ZZ2 – from the fertile Mooketsi Valley, with further operations in the Western Cape, Eastern Cape, Gauteng and North West provinces, and Namibia. They now produce 40% of SA’s tomatoes (more than 190 000 tons per year), in addition to a variety of fruit and vegetables as well as cattle.

The ZZ2 brand name goes back to the registration number given to the second-oldest Van Zyl brother for livestock branding in 1903. More than a century later it stands for the multimillion-rand ZZ2 farming enterprise – a home-grown poster child for the economic prowess of family businesses. Famous success stories with strong family roots include the local heavyweights Pick n Pay, Remgro, Richemont and De Beers, and globally Adidas, Ford, Mittal Steel, Samsung, Tata, Toyota, the Virgin Group and Walmart.

While family businesses come in all sizes, the majority fall into the small-to-medium category. They are defined – in PwC’s 2016/17 South African Family Business Survey – as businesses in which ‘the majority of votes are held by the person who established or acquired the business (or their spouses, parents, child or child’s direct heirs); at least one representative of the family is involved in the management or administration of the business; and in the case of a listed company, the person/s who established or acquired the business (or their families) possesses 25% of the right to vote through their share capital, and there’s at least one family member on the board of the company’. 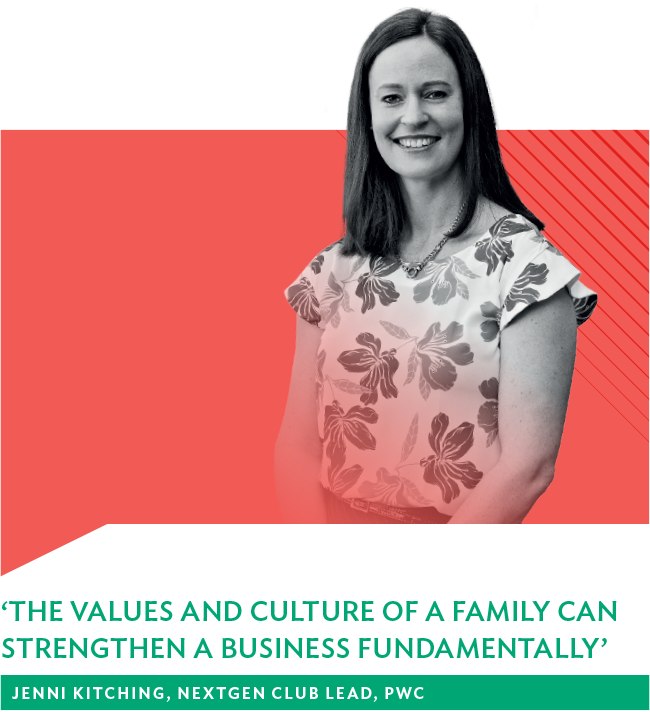 The dynamics of family-owned businesses are often complex, because decisions are based on loyalty, trust and reciprocity, there are emotions involved and the primary driver is to protect, nurture and develop family members.

More than 80% of PwC survey respondents say they have a stronger culture and values, and faster decision-making processes than non-family businesses as well as being more streamlined (78%) and more entrepreneurial (71%). Yet the very characteristics that make a family business strong are also those that potentially weaken it.

‘On the one side, a sibling’s loyalty can outperform a public corporate’s team building by far, but it can also blind one when having to make uncomfortable decisions, for example, regarding sound corporate governance,’ says Jenni Kitching, PwC lead of the NextGen Club, which connects future leaders and owners of family businesses with their local and international peers.

‘The values and culture of a family can strengthen a business fundamentally,’ she adds. ‘However, at the same time, family conflict can destroy the work of generations. It can be a blessing or a curse.’

For most, it’s the latter: merely 30% of family-owned businesses survive into a second generation, according to the Family Business Institute in the US. Only 12% reach the third and 3% reach the fourth generation and beyond.

This is worrying, especially since about 80% of registered businesses and 96% of commercial farms in SA are family businesses, according to the Family Business Association of South Africa (FABASA), which was formed to support this business model and lend business families a voice.

André Diederichs, FABASA founder and chief convenor, explains why so many family businesses crumble. ‘The second generation is close enough to the first to understand the “sweat equity”; the hard work, sweat and tears that have gone into founding the company,’ he says. ‘But the third generation doesn’t appreciate this anymore, as it’s at the receiving end without having had to work for it.’

This is a global phenomenon, as reflected in the American saying ‘from shirtsleeves to shirtsleeves in three generations’, and its Mexican equivalent ‘father merchant, son gentleman, grandson beggar’. Both are quoted in a 2018 research article by the University of Stellenbosch Business School, which puts the average lifespan of a family business at 24 years – about the same number of years that the founder typically remains in control of the business.

To future-proof a family firm, most industry insiders advocate robust, long-term succession planning, which may involve recruiting leadership from outside the narrow family circle.

Diederichs recommends involving the next generation from an early age – to teach children the business principles, motivate them and instil enthusiasm for the company. ‘It’s important to keep the entrepreneurial flair going throughout the generations,’ he says, before pointing to another key challenge – how to balance the personal interests of the family with the interests of the business. The best tool to establish governance structures, he believes, is ‘a family-business constitution’ that sets out the rules and protects the company ‘by not allowing emotions to impact on business decisions’. 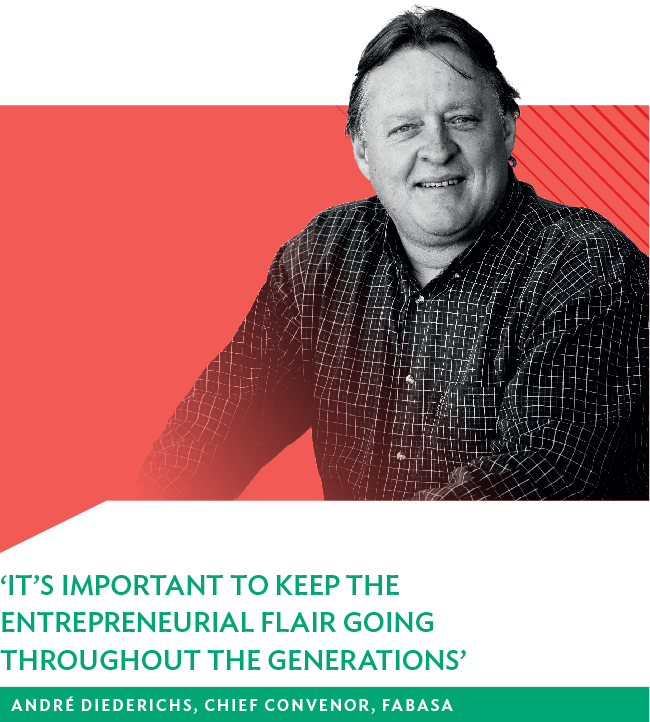 ‘Family businesses are notoriously secretive the world over. They don’t want others to see their dirty washing, or they think researchers are going to give their secrets away,’ says Shelley Farrington, professor at Africa’s only dedicated family-business unit, at Port Elizabeth’s Nelson Mandela University.

‘We have a big interest in black-owned family businesses and are undertaking more and more research among these businesses; whether there are any specific differences worth noting will only reveal itself in due course. At this point, our research suggests that although indigenous African family businesses are similar in many respects to those in a Western context, the underlying philosophy of ubuntu in African culture appears to influence their business decisions, the relationships among family members and their relationships with stakeholders.’

The unit’s current focus is on several studies of indigenous African family businesses, two of them by PhD students. One investigates ‘the role of values on transgenerational potential and how these values are transferred from one generation to the next’ and the second is studying factors affecting transgenerational success in general.

However, because family businesses are so unique, there is no one-size-fits-all approach. Even when addressing the same challenge, their solutions can be completely different, based on each family’s unique culture and specific business demands, according to Catharina Prym, PwC Africa family-business specialist and lead.

‘Yet from a structural perspective, it’s interesting how family-business dynamics follow similar patterns anywhere in the world, culture independent,’ she says. ‘I have worked with families from East China, Europe, the Americas to Africa – and the behavioural patterns stay the same based on a few structural questions. We at PwC globally use the three-dimensions model developed by Professor Peter May to define that specific structure: the challenges family businesses face depend on their ownership, governance and investment structure more than on a specific cultural background.

‘Therefore, we have the same structural necessities, challenges and topics in black-owned family businesses as in any others, yet the solutions we develop with any business family will be unique.’

The next PwC family-business survey (due for release in early 2019) will reveal whether SA’s family businesses have made progress in professionalisation, which was a key concern in previous surveys.

‘What the study refers to is not only technology-related professionalisation, but professionalisation in general: of processes, governance structures, staff,’ says Prym. ‘Primarily the professional leadership structure often is an issue for family businesses in the trade-off between staying in control and leveraging on external know-how.’

Some families manage to develop motivated, entrepreneurial-minded leaders within their own ranks, such as the Van Zyls who have taken their farming enterprise on a continuous growth path.

The current CEO of ZZ2, Tommie van Zyl, tries to remain down-to-earth. ‘When you think you’re king, you’re paw-paw; when you think you’re paw-paw, you’re king,’ he told Forbes Africa magazine. ‘I’m very intrigued by value in a broad sense. Money doesn’t really impress us. We’re impressed by the value of the things we produce and the meaning that we’re creating for many people.’

This focus on value beyond financial profit may just be the special ingredient for building a resilient, transgenerational family business.