WAGE AGAINST THE MACHINE - JSE MAGAZINE

This March, Nedbank employees woke up to the news that 3 000 of them may soon lose their jobs to software robots. Nedbank immediately dismissed the article in question as ‘inaccurate and misleading’ and, amid the inevitable fallout, did its best to deny that it was replacing its human workforce with an army of robots… But the quotes attributed to Nedbank chief information officer Fred Swanepoel in the Fin24 article remained chilling – if you’re made of flesh and bone.

‘What can take a person a long time, a robot can do a lot faster and lot more efficiently,’ he said. ‘In addition, robots don’t get sick, don’t have holidays and work 24 hours a day. You get a vast improvement to your efficiency.’ No wonder, then, that Nedbank was reportedly spending about R2 billion on technology investments, with plans to have 200 software robots in place by the end of 2018.

Of course, Swanepoel was correct, and Nedbank is by no means unique. Across industries and around the world, businesses are cutting costs and improving efficiencies through robotics, AI as well as automation. It raises the question: should those robots be taxed? In a recent interview, Quartz put it to Microsoft co-founder Bill Gates that, in order to generate funds to train workers who are displaced by automation, governments might tax the installation of a robot in a factory.

‘Certainly there will be taxes that relate to automation,’ says Gates. ‘Right now, the human worker who does, say, $50 000 worth of work in a factory, that income is taxed and you get income tax, social security tax, all those things. If a robot comes in to do the same thing, you’d think that we’d tax the robot at a similar level.’ 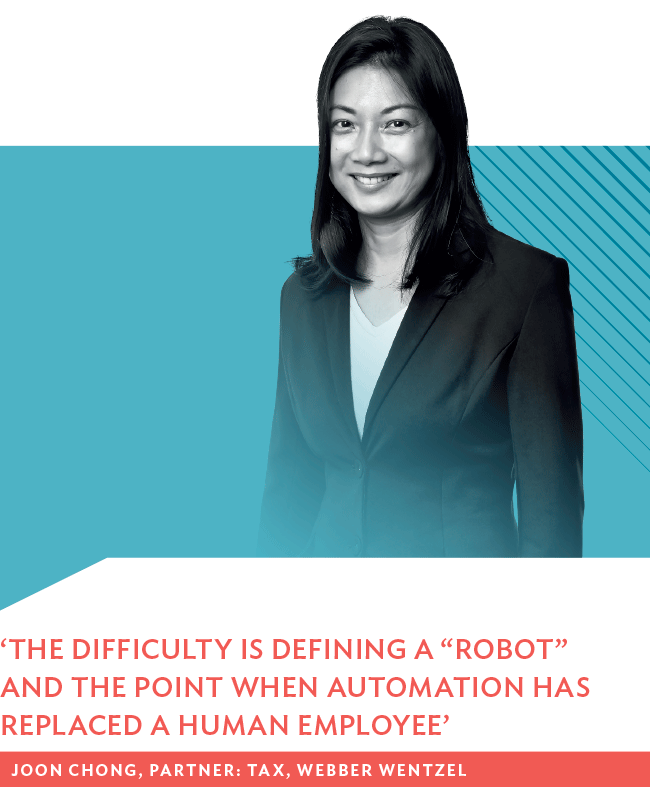 Gates suggests that by taxing those robots, it might slow down the speed of the technology’s adoption, giving society more time to adjust to the changes. He also makes the point that the tax revenue could pay for more employment in education and elder care, with those taxes perhaps coming from the profits generated by the labour-saving efficiency. Some of it, he adds, ‘can come directly in some type of robot tax. I don’t think the robot companies are going to be outraged that there might be a tax. It’s okay’.

In SA, any avenue to increase the tax base would surely be welcomed by the government. But as Joon Chong, a partner in the tax practice at legal firm Webber Wentzel, points out, the amount of work to determine the policy could outweigh the benefits. ‘The difficulty is defining a “robot” and the point when automation has replaced a human employee,’ she says. ‘Some of that automation is in existence already, for example in the motor-vehicle manufacturing industry, where precision engineering requires a very high level of automation.’

It may prove harder than one might first think to figure out exactly what is and isn’t a robot. Comic book company Marvel spent years arguing in the other direction – about the definition of a ‘human’. The US taxes the importation of ‘dolls’ (representations of humans) at about double the rate of ‘toys’ (non-humans). Marvel fought for a decade to prove that superheroes such as Spider-Man and the Hulk were ‘mutants’, and not humans – with massive implications for the company’s tax bill.

Make no mistake: if it means saving on tax, companies will make any and every reasonable argument that their new AI projects aren’t actually AI, and that the robot that just took your job isn’t actually a robot.

The tax question becomes even more complex when you consider the zero-sum replacement of tax-paying human labour with a robot. ‘Effectively, the robot has reduced the PAYE that SARS would have collected monthly,’ says Chong. ‘The robot tax could be implemented as a reverse of the employment tax incentive [ETI]. The ETI is a credit towards or reduction of PAYE payable. The robot tax would increase the PAYE payable, over and above the PAYE calculated for the human employees. The greater the number of robots, the greater the PAYE.’ The difficulty, she says, would be in quantifying the tax calculation and tax rate, as the robot should not qualify for any deductions or rebates.

Also, given the range of automation available, how would you determine how many employees a single robot has replaced? If Robot X is equal to 1.5 employees replaced, the PAYE lost would be the salary of that number of employees multiplied by the marginal rate. But how do you define ‘Robot X’, and why would it be the equivalent of 1.5 employees, rather than 1.8 or 1.3?

‘Ultimately, the employer bears the onus of proving that there is no shortfall in PAYE withheld, if there is a PAYE audit,’ says Chong. ‘The employer would have to do a fair amount of modelling and provide the documentation to support the amounts. Any form of work that could not be done by a human would also need to be excluded from the “PAYE lost” calculation. This is because Robot X could do human work and non-human work.’

Alternatively, Chong suggests, the current Section 11D (research and development) incentive could exclude R&D work that develops ‘robots’ that replace human employees. Or, she says, ‘there could be a new section that limits deductions for expenditure incurred for this type of research and development. The limitation would be similar to what is done in South Korea, which would stifle innovation. The PAYE route is probably the better route as there is a more direct connection between loss of PAYE and “robot” used’.

The Korean example is worth exploring as one unpacks the issue. In 2017, the South Korean government announced that it would reduce the tax deduction benefits that previous administrations provided to enterprises for infrastructure investment aimed at boosting productivity. Around the same time, the European Parliament went in the opposite direction and voted down a proposed robot tax, and called for EU-wide legislation to regulate the development and deployment of robots.

‘MEPs ask the EU Commission to propose rules on robotics and artificial intelligence, in order to fully exploit their economic potential and to guarantee a standard level of safety and security,’ according to a statement by the EU Parliament.

Chong points out that SA is not at the forefront of innovation and R&D, so there would first have to be significant headway made towards automation before a robot tax would be viable here.

‘We would first look at what is being done in other countries such as the US, EU and Australia to determine the viability of a robot tax here,’ she says. ‘There would likely be a discussion document issued by National Treasury before a draft bill is in place. We would have a lot of time.’

When the Korean government made its announcement, Lee Kwang-Hyung, professor of bioengineering and brain engineering at the Korea Advanced Institute of Science and Technology, told the Korea Times that the country’s policy-makers should be cautious about when – and how – to introduce the tax.

‘Obviously it will be better to put the tax on simple automated systems such as unmanned bank-window systems and automatic parking-lot switch systems first to minimise public backlash,’ said Lee. ‘A more pressing concern is that the introduction of robot tax may undermine growth of AI and robot industries here. For this reason, the government should act prudent on the robot tax and learn from the success and failure in overseas countries. What it immediately needs to do is to start public discussions on the robot tax.’

Those discussions are already under way around the world. The International Federation of Robotics (IFR) released a statement recently insisting that a robot tax would make investments in technology more expensive for companies, and pointing to the positive impact that the increased productivity of robots has already had on employment in the most advanced industrial nations. ‘Profits, not the means of making them, should be taxed,’ according to former IFR president Joe Gemma.

Meanwhile, former US Treasury Secretary Larry Summers writes in an op-ed in the Washington Post that Gates was ‘profoundly misguided’ in supporting a robot tax.

‘I cannot see any logic to singling out robots as job destroyers,’ he writes. ‘What about kiosks that dispense aeroplane boarding passes? Word-processing programmes that accelerate the production of documents? Mobile-banking technologies? Autonomous vehicles? Vaccines that, by preventing disease, destroy jobs in medicine?

‘There are many kinds of innovation that allow the production for more or better output with less labour input. Why pick on robots?’