CLASS OF THEIR OWN - JSE MAGAZINE

Describing SA’s education system as in dire straits – possibly even in crisis – would not be an understatement. The country ranks very poorly worldwide when it comes to education, particularly as far as subjects such as maths and science are concerned.

‘More and more, we look to corporates to mentor, upskill and engage with the youth to bridge the gap in education, and provide equal opportunities,’ says Louis Pulzone, CEO of LFP Training. ‘This is particularly evident in the fields of STEM [science, technology, engineering and mathematics] where we look to fill a gap in much-needed acute skills to further advance our country. We are seeing exactly this – an increased focus by the private sector with the implementation of skills development programmes and learnerships. Personally, we have seen approximately R60 million go directly to learners for stipends by corporates.’

Proactive spend targeting education has become a feature of many companies’ CSI efforts in recent years. Standard Bank feels strongly about transformation through education and, in 2016, dedicated R67 million to schooling. The bank has partnered with a range of organisations to fund initiatives that address multiple phases in the education life cycle – from early childhood development (ECD) and education, to bursaries for university studies; from building critical founda-tional skills to enhancing maths and science teaching. Three projects stand out, namely Feenix; the Ikusasa Student Financial Aid Programme; and the bank’s involvement with the National Student Financial Aid Scheme.

Feenix harnesses innovation for the greater good by crowdfunding to pay tertiary fees for underprivileged students. The platform enables qualified students to create a profile for themselves and list their financial needs. Standard Bank then facilitates the donation process directly with the university in question. To date, the fund has raised more than R2 million and fully funded the studies of at least 30 students.

Mining company Sibanye-Stillwater (formerly Sibanye Gold) makes significant investment into education-specific CSI initiatives. Since 2013, the company has spent in excess of R13.2 million on maths and science basic education initiatives in the Free State and Gauteng. One of its more recent projects is aimed at maths. In late October 2017, the company presented a state-of-the-art maths laboratory to the Department of Education in the Free State province and the Mamello Secondary School in the Lejweleputswa municipality. ‘We believe that this facility will enhance mathematics education in the local communities and develop a pipeline of learners that are able to succeed in careers that require maths and science,’ according to Sibanye-Stillwater CEO Neal Froneman. The facility is an ICT-enabled maths laboratory that makes learning interactive and enjoyable, quashing the notion that the subject is difficult and abstract. The facility is resourced with an electronic board, 40 tablets, a laptop for the teachers and other manipulative tools. The mining company invested approximately R1.4 million into the lab, as well as the installation of a borehole to reduce the school’s water and electricity bill.

According to Howard Arrand, FNB Fund chairperson, the FirstRand Foundation is one of the largest corporate givers in SA, having invested more than R1 billion in CSI since it was established in 1998. Arrand notes that the main focus of the foundation’s investment is education, which receives the greatest amount of available funding. In 2016/17, it invested in excess of R156 million (69% of the CSI education and social development budget) across 59 different education initiatives. These include ECD projects, mathematics education chairs, tertiary education and the Laurie Dippenaar Scholarship programme.

‘The foundation believes that it is critical to improve the quality of education and educational outcomes in South Africa as this represents an effort to confront a root cause of many of the challenges the country faces, instead of simply treating the symptoms of poverty, unemployment and other problems,’ says Arrand.

‘The more we invest here, particularly from a very early age, the more we help create a culture of learning. Over and above an improved basic education, this changing culture will undoubtedly lead to a dramatic increase in the quality of specific skills such as IT, accounting, engineering and entrepreneurial.’

The Pick n Pay School Club has been operating for 14 years and is one of SA’s most dynamic public-private educational initiatives. The club collaborates with HDI Youth Marketeers in the provision of educational resources to 3 025 local schools (725 high schools and 2 300 primary schools), reaching 5.7 million learners, teachers and caregivers. The free educational material supplied by the initiative – books, posters, overview brochures, recognition stickers, certificates and mirror decals – is specific to learners’ grades, aligned to the curriculum and written by experts. The material also addresses nutrition, health and sustainability topics.

Another of Pick n Pay’s education-centric initiatives is the Sifunda Ngokuthetha project, which is still in its pilot stages and aimed at turning an everyday trip to a supermarket into an opportunity for enriched caregiver-child interaction.

The model involves placing eye-catching signs featuring engaging language and maths  prompts at several locations within a store, prompting caregivers to start conversations with children that will expand their vocabularies and help them learn. The retailer plans to trial the high-impact, low-cost early learning intervention at five key stores in 2018.

Meanwhile, the Sasol Inzalo Foundation (SaIF) is a public-benefit organisation with a specific focus on STEM education. Technically, the foundation, which was established in 2008, is not part of Sasol’s CSI, being a separate entity. However, it serves a similar purpose with similar goals.

SaIF’s mandate is to help alleviate bottlenecks in the country’s schooling system, boost the vocational skills pool and create tertiary educational opportunities for learners from low-income households in SA.

‘The objective of the Sasol Inzalo Foundation is to make a significant contribution to sustainable economic growth in South Africa by focusing on skills development, primarily in STEM education, through initiatives aligned to the National Development Plan,’ says Yvonne Muthien, the chairperson of SaIF.

To date, SaIF has provided bursaries to more than 1 000 young people from townships and rural areas, most of them women, to study towards degrees in science and engineering. Of these, some 500 have already obtained their degrees. The foundation has also expanded the programme to include the funding of STEM technologists and technicians studying towards national diploma and B Tech degrees.

In early 2017, SalF, in partnership with the Department of Science and Technology, Hartebeesthoek Radio Astronomy Observatory and the National Research Foundation, donated a state-of-the-art mobile science laboratory to be used by learners in rural schools around Krugersdorp, Gauteng. It is the seventh mobile science lab that SalF has donated over the past financial year.

According to Lindiwe Temba, executive head of the Nedbank Foundation (the main arm of corporate social investment for the group), the group’s consolidated spend for CSI in 2016 was R141 million. Some 51% of this, R72 million, was spent on education initiatives.

Temba argues that investing in education and skill building is crucial for the country’s growth and development. ‘Everything is interconnected,’ she says. ‘Our success as an organisation cannot be separated from the well-being of the people and communities in which we do business. That’s why we invest in education.’

Nedbank’s education-focused projects centre on literacy in ECD, improving maths and science at both primary and secondary school level, and school management and leadership, which includes teacher training, academic support and learner materials. One of the bank’s main initiatives, a training programme for ECD teachers in Gauteng, is done in partnership with HeronBridge Training and Resource Centre. Through the initiative, staff at facilities such as crèches, where the teachers are rarely qualified ECD practitioners, are trained and mentored. Thus far, the project has seen 37 practitioners from 25 schools in Diepsloot township trained to NQF level 5. 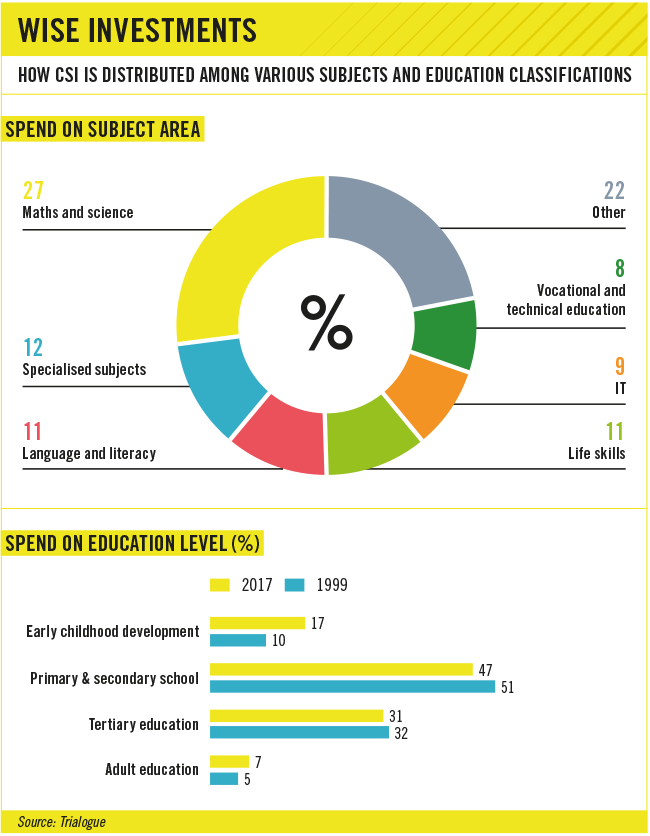 Another key initiative is a maths and science leadership academy, which Temba says has grown to assist more than 440 Grade 7 to 12 learners across 38 schools in Kimberley in the Northern Cape. Twenty teachers have also benefited from this project. ‘It is a programme that aims to develop problem-solving skills and cultivate the children’s passion for this,’ says Temba. ‘It also helps teachers develop their knowledge of how to best deliver the curriculum, and to make maths interesting and exciting.’

Temba considers CSI a non-negotiable. ‘It is a business and moral imperative for Nedbank,’ she says, adding that it is a responsibility that must be shared by all South Africans. ‘We can’t compete globally as a nation if we don’t have an educated population and driven leaders.’ Corporates need to shoulder their share of responsibility in supporting educational initiatives, she says, though this by no means absolves government of its responsibilities.

‘Corporate SA is doing a lot, and significant amounts of money are being invested by the private sector. What is still lacking, though, is a co-ordinated approach. Consider the vast amounts of money being put into education… If there was more collaboration, you can only imagine what could be achieved.’