SA must step up efforts to woo more investors from China

In June 2019, Chinese and SA entrepreneurs signed a total of 93 trade agreements worth R27 billion. One noteworthy agreement was an additional equity injection into a Chinese auto-assembly plant in Coega, where the Beijing Auto Industrial Corporation is building a light-vehicle manufacturing plant. ‘Our engagement through platforms of this nature reflects our common determination to take our economic relations to greater heights,’ said Minister of Trade and Industry Ebrahim Patel.

Diplomatic relations between SA and the People’s Republic of China have been more than 20 years in the making, according to Patel, helped by the upgrading of partnerships between the two countries to a strategic level with the adoption of the Comprehensive Strategic Partnership Agreement (CSPA) in 2010. In line with this agreement, Patel stressed that SA exports to China would shift to more value-added products to grow industrialisation, which would bolster employment locally.

‘The CSPA prioritised improving the structure of trade between the two countries by working towards a more balanced trade profile and encouraging trade in value-added manufactured products,’ he said. ‘This would be achieved through Chinese enterprises investing in South Africa’s manufacturing industry, as well as actively promoting the sourcing of value-added products by China from South African suppliers.’

As noted by Simbarashe Mhaka and Leward Jeke in an evaluation of the trade relationship between the two countries from 1995 to 2014, about 90% of SA’s top 10 exports are raw materials, which is why the dti is promoting, mainly by means of trade exhibitions, value-added manufactured products to China.

Along with the CSPA, SA and China have implemented eight major initiatives under the Forum for China-Africa Co-operation, in the areas of industrialisation, infrastructure, trade and investment facilitation, financial services and capacity building.

In August 2010, SA’s Midas of lifestyle-based insurance, Discovery CEO Adrian Gore, led the investment into Chinese insurer Ping An Health. ‘We’re very optimistic about how people will respond to these incentives,’ he said. ‘From our research, insurance in China seems to be one of the up-and-coming markets. It seems, to an extent, a one-way bet.’ Gore further explained that the investment  was heavily facilitated by strong SA relations with China. ‘We’ve been welcomed in China and we’ve worked with the regulators, who have been remarkably receptive to us.’

On the back of the considerable growth of its investment in Ping An Health, Discovery announced in December 2019 the establishment of a new business unit, Vitality Health International (VHI). The purpose of the unit is apparently to co-ordinate and intensify focus and resource allocation to Discovery’s global emerging health insurance initiatives.

Chris Egbrink, managing principal and country head of global banking, South Africa, at Standard Chartered Bank, lists the noteworthy investments that piqued his interest. These include ICBC’s 20% stake in Standard Bank in 2007; Jinchuan’s acquisition of Metorex in 2011, which was estimated at $1.3 billion, as well as its 51% stake in Wesizwe Platinum in 2010. China’s state-owned Sinopec also purchased a 75% stake in Chevron South Africa for $900 million. SA companies invested in China include the obvious example of media Goliath Naspers’ investment into Tencent, of which its original 33% stake as at 2017 was valued at $128 billion.

Egbrink explains that SA is a strategic economic partner for China, serving as an economic and institutional stronghold on the African continent. ‘Economic relations can be highly impacted by diplomatic and cultural exchanges and, since 1998, relations between the countries have rapidly developed, starting from a partnership to a strategic comprehensive partnership, with a number of trade and investment treaties signed,’ he says. This relationship is mutually beneficial, with China being SA’s largest trading partner and SA being China’s largest trading partner on the continent.

Natural resources, such as mineral products and precious metals, account for more than 50% of Chinese imports, while SA’s main imports are machinery and textiles, says Egbrink.

Acknowledging the trade deficit between the two nations, Egbrink says there has been an average gradual increase between the deficit with more imports flowing into SA than exports going to China. ‘In the long term it is unsustainable and has put strain on the SA current account,’ he says.

‘Authorities will need to work closely to see increased penetration of value-added goods into the Chinese market.’ In other words, what SA needs is a diversified export structure. Egbrink sees the chemicals and raw materials markets remaining the same, but the local consumer goods sector is where the potential for increased exports lies, he says. 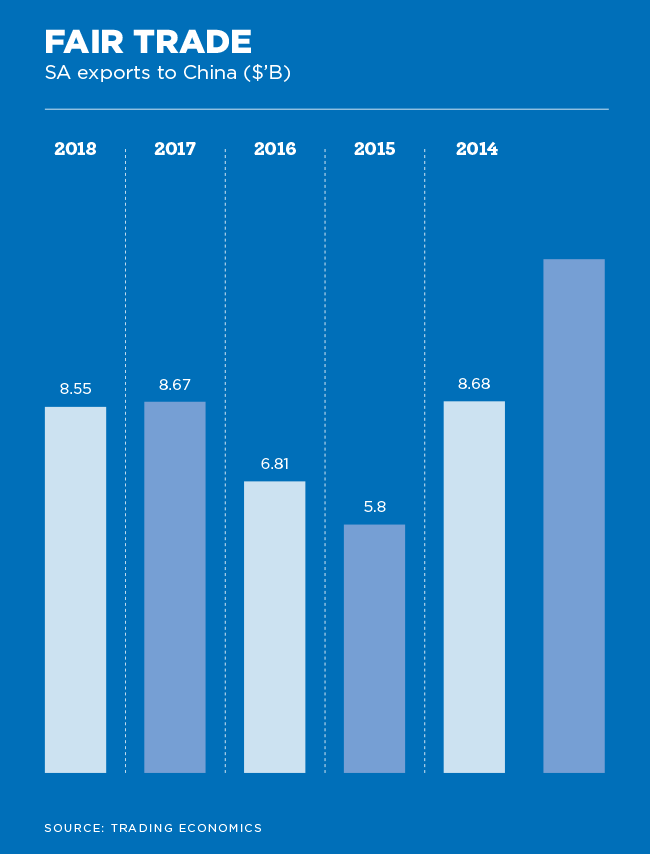 Writing in the Daily Maverick, agricultural economists Wandile Sihlobo and Tinashe Kapuya argue that while China should be a focus for agricultural export, trade barriers, which see China’s facilitation of agricultural trade agreements one product line at a time, have slowed down the trade.

According to the authors, SA’s agricultural exports account for 0.5% in China’s agricultural imports. Its presence in the Chinese market consists mainly of wool, citrus, nuts, sugar, wine, beef and grapes, but these are negligible, the exception being wool. However, the growing population and income in China provide a good base for the demand for higher-value agricultural products.

Issues within the economy will continue to deter some investors, despite the signing of trade agreements, notes Egbrink.

China’s ambassador to SA Lin Songtian told Reuters in July that projects proposed by SA authorities had lacked feasibility studies to reassure the Chinese government and banks of their profitability and sustainability. He also said that Chinese investors want to see favourable conditions made legitimate in an investment law approved by Parliament.

‘To date, there are no major infrastructure projects from China here. Why? Because we don’t only need the concept of a project,’ the ambassador told Reuters. Furthermore, upgrading SA’s railway network, modernising the Durban port and fixing Eskom would also help bring in Chinese money, Songtian said.

One area that could see huge growth is tourism. ‘This strategic co-operation agreement is one of many initiatives developed to increase arrivals from China to South Africa,’ said tourism minister Mmamoloko Kubayi-Ngubane late in 2019, following an agreement between SA Tourism and Tencent, China’s biggest online platform. ‘Tencent, through its popular platform, WeChat, will assist us to access multiple segments of the Chinese traveller’s market,’ she said. 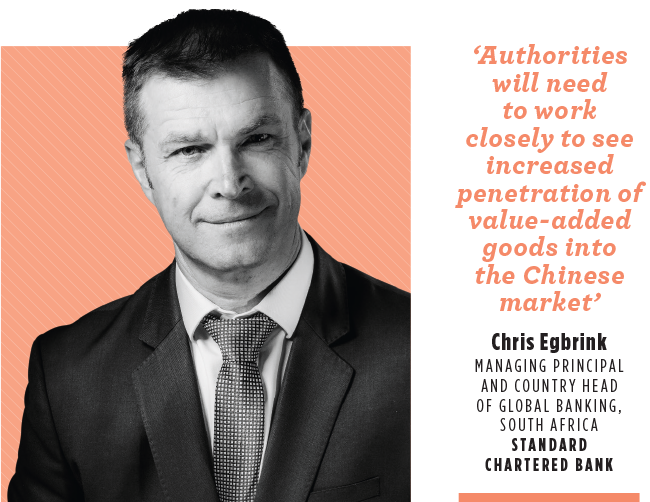 The partnership would be used to promote SA as a preferred tourism destination in China, through digital marketing campaigns on WeChat as well as other platforms in the Tencent ecosystem.

SA Tourism explained in a media release that the country was leveraging its significant trade relationship with China to ‘strengthen the people-to-people exchange between the two countries’.

‘With our renewed focus in this market, we project that our efforts will generate an increase in the share of international arrivals to South Africa from China to over 9% of our total international tourist composition,’ said Kubayi-Ngubane, while delivering her department’s 2019 budget vote speech in Parliament.

Speaking to China Daily, tourism consultant Gillian Saunders said the potential for an increase of Chinese tourists to SA is obvious, especially given what is on offer. ‘I think we have attractive offerings, especially for older generations of Chinese travellers, who are maturing as tourists and seeking new destinations with cultural, gastronomy, new experiences; looking at self-drive; doing independent and not group travel,’ she said.

Chinese millennials are looking for similar adventurous destinations as they start to travel, and SA offers them a range of these options, from beach to coastal, safaris, vibrant cities, cultural heritage experiences, scenic beauty, and more, Saunders explained.

The next step then is for South African commerce to woo investors and Chinese importers with its diverse offerings.