The VivaTech conference, held in Paris last May, is Europe’s biggest annual investor forum for start-ups. More than 13 000 from 125 countries were represented in 2019, while 124 000 people attended the three-day event.

Among those start-ups was Aerobotics, a Cape Town-headquartered outfit that specialises in ‘tree-crop pest-and-disease monitoring processes using aerial data and AI software to process satellite and drone imagery and deliver insights to farmers’. Established in 2014, it currently has clients in nearly 20 countries. Following a ‘pitch’ battle among African start-ups, the company was deemed the winner of the . Then in November last year, Aerobotics and Nedbank CIB Venture Capital won the Venture Capital/Start-up Category award at the Southern African Venture Capital and Private Equity Association (SAVCA) Industry Awards.

Nedbank was an investor in Aerobotics in July 2018 when the start-up raised about $2 million in funding. Aerobotics is just one of a series of SA start-ups that have secured recent funding from venture capital investors.

The majority of VC investments were in Gauteng and the Western Cape, with Gauteng-based businesses receiving the lion’s share of VC funds in 2018 (R658 million), a 38% increase from 2017. VC deals in the Western Cape amounted to R433 million in 2018 and KwaZulu-Natal-backed VC businesses saw a substantial increase in 2018 with funding amounting to R71 million. The jump in VC deals is particularly significant when considering the current slow economic climate, notes Van Lill, but she admits the low number of exits is cause for concern. Exits reported in 2018 (11) declined from 15 in 2017.

‘Determining the lack of exit activity in the sector is something SAVCA will explore, as the continued growth and success of the sector would be dependent on the number and quality of exits reported,’ says Van Lill.

SAVCA research shows that 41% of new deals in 2018 went towards start-up capital, almost half of all deals, highlighting the essential role of VC in funding scalable start-ups. The biggest markets for VC in Africa continue to be in SA, Nigeria and Kenya, each leading in a different field in the sector, says Janade du Plessis, head of principal and alternative investment (VC) at Nedbank. ‘There is a lot of idea generation in Nigeria and Kenya on cheaper infrastructure, and then in SA corporate collaboration, hence the stronger business-to-business and stronger financial services industry in SA.’

Du Plessis notes that VC investments other than Aerobotics included Snapt, Whereismytransport, Pineapple, LulaLend, Valr, Centbee and SweepSouth, most of them operating in the tech space.

The technology sector is very lucrative for VC because of the inherent scalable nature of the industry, especially software, which ‘can grow disproportionately exponential to traditional business models’, says Gavin Reardon, managing partner at Kingson Capital, a VC firm based in SA. ‘Industries of focus will remain software-as-a-service products and platforms for the business-to-business industry.’

Currently, there’s a shift from a product-driven services model to technology-services models, according to Du Plessis. These latest technologies give companies the competitive edge by solving customers’ needs conveniently and effectively. ‘We are seeing that even existing business models, as in use by banks, are changing entirely by becoming increasingly digitised, which is disrupting the existing ones,’ he says. 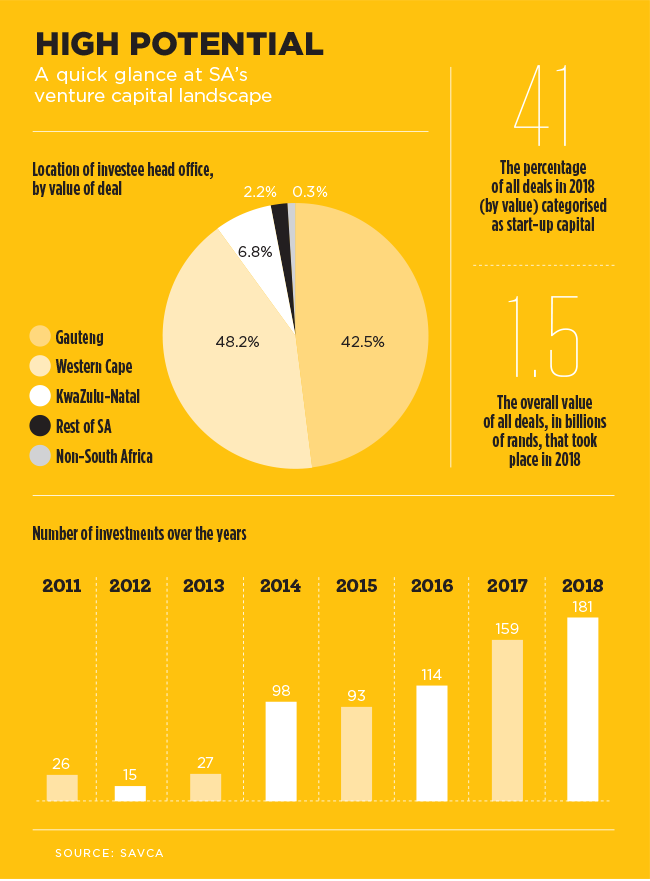 As Brett Commaille, director and investment principal at Hlayisani Capital, notes, ‘tech should not be seen as a sector on its own but rather as an enabler across all sectors’.

Ian Lessem, managing partner at HAVAIC, an SA-based investment and advisory firm, points out that returns in the VC sector are ultimately realised on exit, and a profitable exit is most likely to come by way of an international trade buyer or IPO. ‘With IPOs being few and far between, we tend to concentrate on exiting to trade buyers, who are less likely to be interested in paying a premium for a pure domestic company,’ says Lessem. ‘However, if the domestic company has demonstrated that through its technology it has international reach and ability to scale, it is likely to be more attractive to an exit partner, and in turn investors are more likely to get the returns needed to justify investing in the VC space.’

Private equity, says Du Plessis, can show returns of between 20% and 25%; VC investments can deliver returns of 30% or more, but higher return is coupled with higher risk.

A direct comparison of returns to other investment sectors is difficult at this stage, as the VC industry in SA is relatively small and still growing.

‘We should thus be careful not to base industry returns on a few examples or a small sample,’ says Malizole Mdlekeza, chairman of the Actuarial Society of South Africa’s Alternative Investments Forum.

‘If you look at the more established VC market in the US as a benchmark or proxy, there is a pooled five-year IRR [internal rate of return] figure of 15.30% to the end of 2017, according to the US Venture Capital Index and Selected Benchmark Statistics by Cambridge & Associates,’ says Mdlekeza. This is compared to a figure of 15.79% for the S&P500 Index. Over 10 years, the returns are 9.04% for VC and 8.5% for the listed S&P500 Index. Over even longer time periods, VC shows as having outperformed listed equities, with a 20-year figure of 22.9% compared to 7.2% for the S&P500.

The returns on VC should be higher to compensate for the level of risk associated with the investment, says Mdlekeza.

He adds that according to the Cambridge & Associates survey, early-stage VC also seems to consistently outperform later-stage VC over various time periods as well. Keep in mind that the VC return figures are IRRs, and the S&P returns are based on the equivalent of time-weighted rates of return.

The general state of the VC climate in SA can be broken down into positive and negative, Du Plessis explains. Increased capital flow into the sector, stronger corporate collaborations between start-ups and investors, and an increase in government support bode well for the future of VC investment in SA. 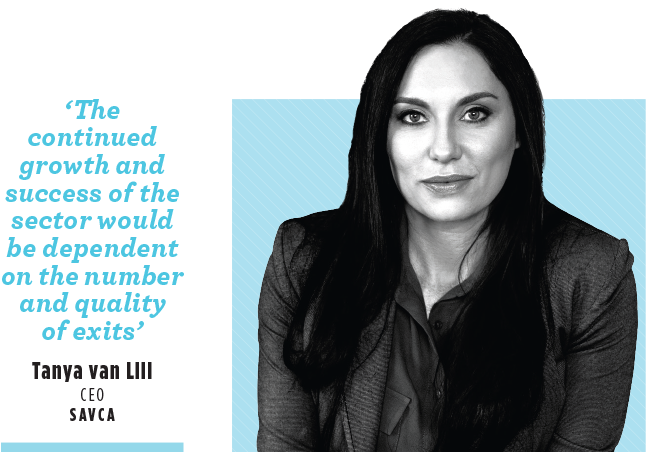 However, challenges remain. Because of regulatory constraints and other factors, it can be cumbersome doing business in SA. And these challenges are often paired with high technology-infrastructure costs and almost non-existent early-stage funding support from friends, family and angel investors.

Du Plessis says that for this to be rectified there must be more exits in the industry, proving that VC and businesses in SA can provide IRRs of 30% or more. Government policies and regulation supporting small businesses need to improve and, along with the development of skills in this sector, more incentives need to be used as a carrot for local and foreign investors.

‘The main restriction is really around awareness and education,’ says Lessem. ‘VC is not a well-known or understood asset class locally.’

Section 12J enables investors to obtain an upfront tax deduction on any amount invested in a venture capital company (VCC). For example, if an investor falls within a marginal tax bracket and they invest R1 million in a VCC, the full amount invested can be deducted. Furthermore, assuming a taxable income of R2 million, the tax owed will reduce from R900 000 to R450 000.

Through this process the VCC invested in obtains funding, enabling it to invest in a qualifying company. And this is the ultimate aim of Section 12J – to fund small businesses, which, in theory, will eventually lead to job creation and greater economic growth.

The Section 12J amendments have brought many more individual investors into the sector, notes Commaille, but globally SA is far behind in the level of institutional support and investment experienced by developed markets.

When things do align, investors seek out companies that have a strong management team with solid technical and entrepreneurial capabilities; a large target market; a validated solution; and unique disruptive technologies that have a distinct barrier to entry. Furthermore, the company must have a defensible business model able to pivot and adapt swiftly, says Du Plessis.

‘As the industry starts to mature, we may see more fund managers opting to specialise in specific industries, or new funds being established as new sources of capital become available from institutional investors looking to capitalise on early-stage investments.’