The leaking of the Panama Papers has exposed a murky world of hidden money. The revelations have focused the spotlight on how tax havens can be used and abused, and raised questions about whether they should even exist. The papers also draw attention to just how much money is stashed in tax havens – a figure almost impossible to determine but estimated to be trillions of dollars.

The Panama Papers are based on the findings of a year-long investigation into the leaked data by the International Consortium of Investigative Journalists (ICIJ), German newspaper Süddeutsche Zeitung and more than 100 news organisations. They examined data from 1977 to the end of 2015.

The 11.5 million leaked records from the Panamanian law firm Mossack Fonseca reveal offshore holdings linked to 140 politicians and public officials around the world, including Russian President Vladimir Putin. The Prime Minister of Iceland Sigmundur David Gunnlaugsson had to resign after he was found to have had an offshore company in Panama.

Mossack Fonseca has denied wrongdoing, saying media reports ‘portrayed an inaccurate view of the services that we provide and, despite our efforts to correct the record, misrepresented the nature of our work and its role in global financial markets’.

Being named in the Panama Papers does not necessarily mean that the person or company is involved in illegal or unethical activity, says Alwyn de Koker, professor emeritus of tax law at the University of Witwatersrand School of Accountancy. ‘The investments of many South Africans in foreign entities normally comply with exchange control regulations, which require the beneficial owners to obtain prior tax clearance,’ he says. 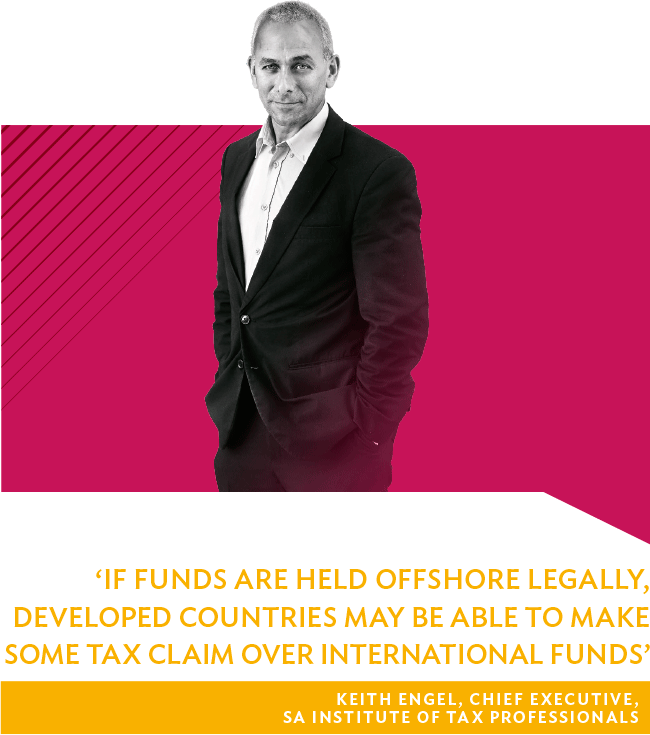 Nevertheless, the names of people and companies that the US has blacklisted for being linked to drug trafficking and terrorism have been discovered in the leaked files, as well as those with links to organised crime syndicates, according to the ICIJ.

The names of a number of South Africans, including Khulubuse Zuma – nephew of SA President Jacob Zuma – and two men connected to the J Arthur Brown-related fraud at asset manager Fidentia were among those leaked.

According to Business Day, the South African Revenue Service (SARS) has found the names of 1 700 SA residents in the leaked data. SARS is comparing those identified in the Panama Papers with income tax declarations to look for discrepancies, but says it is still too early to tell whether any tax evasion has taken place.

Although no South African has been implicated in any misdeed, the leaks raise questions about whether tax evasion is rife in the country. If so, what effect does this have on emerging markets such as SA? There are also blurred lines between what amounts to tax avoidance – which is legal – and tax evasion, which is illegal.

‘Tax avoidance exists when the transaction undertaken would potentially survive judicial scrutiny if all facts were fully known to a judge,’ says Keith Engel, chief executive of the South African Institute of Tax Professionals.

According to Engel, tax evasion – on the other hand – involves deliberately hiding facts. Income is not disclosed or deductions are artificially claimed, perhaps using false invoices. Then there is the blurred line between avoidance and evasion, which Engel says is sometimes referred to as ‘avoision’.

‘In these instances, the tax opinions in support of the position taken are highly questionable or based on partial disclosures of facts. Boutique firms are often involved as the centre for these activities. These transactions also employ chains of entities so tracing of funds is difficult factually but not outright illegal,’ he says.

The release of the Panama Papers has led to much finger-pointing at tax havens such as Panama. De Koker says this, however, is a big irony. ‘The real secrecy problem does not rest with the palm-fringed islands or the oft-maligned Switzerland. The biggest and most abusive tax haven in the world is America – and its banks are awash in laundered and undeclared moneys from Latin America and the rest of the world.’

The Tax Justice Network ranks Switzerland, Hong Kong, the US, Singapore and Cayman Islands as the top five most secretive countries in the world in its 2015 Financial Secrecy Index. SA is ranked 61st out of 92 countries. According to the index, SA accounts for slightly more than 0.2% of the global market for offshore financial services, making it a small player compared with other secrecy jurisdictions.

It is impossible to determine just how much money is hidden in tax havens. French economist Gabriel Zucman, in his book the Hidden Wealth of Nations: the Scourge of Tax Havens, estimates that there is $7.6 trillion hidden in tax havens such as Switzerland, Bermuda and Cayman Islands. He reckons about 30% of Africa’s wealth is concealed offshore, while Switzerland holds around one-third of hidden wealth. On the contrary, the Tax Justice Network has estimated that between $21 trillion and $32 trillion could be stashed offshore.

Over the past 50 years Africa is thought to have lost as much in illicit financial outflows (IFFs) as it has received in official development assistance – in excess of $1 trillion, according to former SA President Thabo Mbeki. He chaired a panel investigating IFFs that produced a report commissioned by the UN Economic Commission for Africa.

The report estimates that Africa loses more than $50 billion each year through IFFs – roughly 5.5% of the continent’s GDP. Large commercial corporations are by far the biggest culprits of illicit outflows, followed by organised crime. This is facilitated by corruption and weak governance. IFFs typically originate from commercial tax evasion and abusive transfer pricing; criminal activities; and theft by corrupt government officials.

Engel points out that all countries, except the tax havens, lose out when money is squirrelled away in hidden locations. ‘These havens serve as places for money laundering – not just tax avoidance. These large amounts are also left outside local economies, so rich countries and poorer ones view these practices with disdain.’

He adds that emerging markets lose out when wealth is removed to offshore locations, regardless of whether it is legal or not.

‘No country has the same right of taxation for offshore holdings. Admittedly, if funds are held offshore legally, developed countries may be able to make some tax claim over international funds – whereas illegal offshore holdings mean that money is wholly lost. However, the real issue is that excess wealth should be reinvested in the country of origin,’ says Engel.

This money could then be used for improving healthcare, education and infrastructure – all critical to the economic success of Africa.

Mbeki’s report highlights that outflows are seriously concerning, given the problems facing the continent, including poverty, inequality and the tapering of official development aid as the global economy slows down.

Transparency International, the global anti-corruption NGO, has played a leading role in mobilising public pressure and proposing policy measures to staunch cross-border flows of illicit funds. Its local affiliate, Corruption Watch, has been active domestically. It has focused particularly on pressurising government to adopt legislation requiring companies to disclose their beneficial ownership and for this information to be placed on a publicly accessible register.

It is also advocating closer regulation of intermediaries – for example, as the Panama Papers so graphically revealed, law firms – that are ‘so critical in facilitating illicit financial flows’.

‘Pre-emptive measures to deal with this huge problem are all about greater transparency,’ says David Lewis, Corruption Watch’s executive director. ‘Disclosure of beneficial ownership is one example. Another powerful measure would be requiring multinational companies to report on a country-by-country and project-by-project basis, thus limiting the ability of companies to engage in transfer pricing and illegal invoicing.

‘We have recently undertaken a study of corporate reporting in South Africa and our companies do not do too badly relative to their peers in other countries. But we could do a lot better.’

The leaking of the Panama Papers has turned the global spotlight on tax evasion. The hope is that this will lead to enough public pressure to stamp out activities that handicap emerging markets from reaching their full potential. 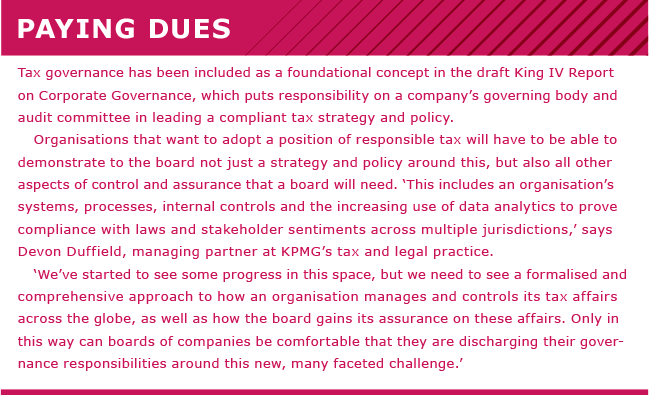