ALL FOR NOUGHT - JSE MAGAZINE

Zero-based budgeting (ZBB) is the dark horse in the stable of accounting tools. It’s a term that has evoked misconceptions, frequently being mentioned in the same sentence as ‘austerity’, ‘job losses’ and ‘cost cutting’. But if properly implemented, this budgeting approach can challenge complacency and improve operational efficiencies.

The concept gained popularity in the US in the 1970s but then lost momentum. However, it is currently experiencing a resurgence with multinationals such as Kraft Heinz, Mondelz, Anheuser-Busch InBev, Coca-Cola and, most recently, Unilever.

‘Zero-based budgeting isn’t a magic potion,’ says James Anthony, a senior lecturer at the University of Cape Town’s College of Accounting. ‘It’s a time-consuming exercise in which an organisation re-evaluates all expenses from the bottom up and cuts wastage – which seems to be working for some large corporations. There’s potentially a lot of value in it for small to medium enterprises as well; primarily because the philosophy behind zero-based budgeting forces management to be less complacent, to reflect on their operations and to focus on value creation.

‘It’s easy to fall into the habit of “business as usual” and roll over your daily operations without ever questioning them. But as soon as you apply zero-based budgeting, you throw everything out of the window. You say: “Hold on, what’s this? Should we be doing that?’’’

ZBB builds the company budget from the ground up, by reviewing – and justifying – every single expenditure at the beginning of each budget cycle. Deloitte defines this as ‘a budgeting process that allocates funding based on programme efficiency and necessity rather than budget history’.

This indicates that the literal interpretation of ZBB (a technique for building a budget from zero) may be too simplified. Yes, it does take a ‘clean slate’ approach to cost transformation – in contrast to traditional incremental budgeting where the previous year’s budget is rolled over as a template for the new budget.

‘But even though ZBB doesn’t automatically include items from the previous budget, it does involve a base case (or minimum amount) of funding that is required to keep even the leanest organisation running.

‘There’s still an operational base level that won’t necessarily need to change, so strictly speaking you’re not always starting from zero every year,’ says Anthony. ‘Everything over and above this base case is considered to be incremental growth, improvements and additional projects, and various other potentially negotiable operations. It’s this extra stuff, the incrementals and “wish lists”, that become the negotiables. And that’s often where the big change lies.’

He explains that, in simple terms, ZBB strives to get the most bang for one’s buck. ‘There’s a finite amount of money in the kitty, so let’s focus on putting money into those projects and products that generate the most value.’ 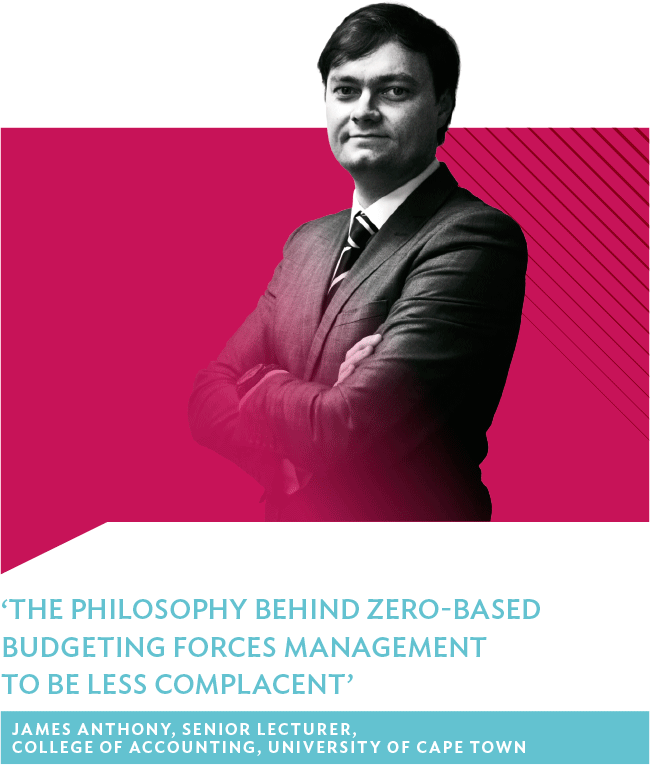 There’s renewed interest in ZBB to give companies a competitive edge in volatile economic times. But proponents say that it’s designed to reduce costs and drive growth for the long haul rather than just to navigate a crisis. ZBB can be applied to curb costs in a single project, business unit or the entire company itself.

Strategy& (formerly Booz & Co before its acquisition by PwC) explains that companies often attack costs the wrong way because they settle for ‘intermittent top-down interventions such as across-the-board percentage spending cuts, deferral of investments, snap reorganisations, or layoffs’.

The report explains that ZBB provides a more sustainable, long-term approach that can minimise costs without the up-and-down spike. ‘The expenses for all organisational activities – everything from the way books are kept in accounting and specific marketing campaigns, to IT, legal and maintenance, to communications in the executive suite, to name just a few – are rigorously assessed, and funding for these activities is recalibrated.’

Thanks to ZBB, global food giant Mondelz – present in 165 countries with brands such as Oreo biscuits, Jacobs coffee, Cadbury and Milka chocolates – achieved $350 million savings in 2014. The company posted $34 billion revenue that year and aims to save $1 billion over three years, according to management consultant Accenture, which orchestrated the new budgeting system. The reason behind this was the snack firm’s wish to improve its operating margins, which were lower than those of its competitors.

Accenture says it took a ‘measured approach’ to ZBB. ‘The team focused on taking cost out of low-value areas like travel and other overheads so Mondelz could reinvest the money in areas that create a competitive advantage, such as product development and marketing.

‘The new budgeting processes and change-management programme have helped embed cost consciousness in the company’s day-to-day operations and culture.

‘Mondelz employees are equipped with the processes and tracking tools to meet their budgetary targets. This cultural change is delivering ongoing efficiency savings that can be reinvested into growth initiatives,’ it stated.

In the last statement lies the key to successful ZBB: a change in corporate culture coupled with employee buy-in and behavioural adjustment are paramount. ‘It’s a symbiotic system in the sense that one can’t impose this kind of budgeting from the top down and hope that it works,’ says Anthony.

‘There’s a psychology and management mindset about it that has to focus holistically on the entire organisation. Employee communication needs to filter throughout the company. If there’s a broken telephone anywhere along the chain, you’ll have serious problems.

‘Management should justify zero-based budgeting in a positive way,’ he says. ‘They should explain it’s not about cost cutting or laying off jobs, it’s about taking the limited amount of money that we have and creating the most value, because that’s beneficial for everyone. That’s very different from saying: “Sorry, guys, we’re in times of austerity, therefore we are implementing ZBB and you must justify your expenses.”’

It’s generally easier to establish ZBB in companies that are already in the doldrums – when employees fear job losses or even complete shutdown, they are more likely to accept it as a necessary step, even as being a ‘saviour’.

Anthony adds that ‘in healthy companies, there’s a stickiness about employee behaviour change, and the “if it ain’t broke, don’t fix it” attitude can undermine successful implementation as employees resist the change’.

The Brazilian private-equity firm 3G Capital, which is behind mega-mergers such as Kraft Heinz, and Anheuser-Busch InBev with SABMiller, has used ZBB to streamline its operations and increase profitability.

At Heinz, hundreds of management jobs were lost and corporate jets abolished. According to the Wall Street Journal, there are no more free office snacks and employees need permission to make colour photocopies. The underlying drive is to cut all wasteful expenditure and hold employees accountable, so they treat the company’s money like their own.

International management consultant McKinsey explains: ‘ZBB makes cost management a part of the way every employee works on a daily basis. Fortunately the culture shift isn’t left to chance. We believe that there is a proven, step-by-step approach to implementing successful ZBB programmes. When properly implemented, ZBB can reduce sales, general and administrative costs by 10% to 25%, often within as little as six months.

Unilever recently announced it would adopt ZBB for its overheads as well as brand and marketing efficiencies, despite posting organic sales growth of 4.1% for the year.

The company is a pioneer in sustainability, having achieved zero waste to landfill across its global factory network in early 2015. Some analysts say this may be a fresh strategic move beyond mere cost cutting, to shake things up and improve the business.

This could indicate that ZBB – the dark horse of accounting – has been let out of the stable, and already it’s starting to attract the smart money. 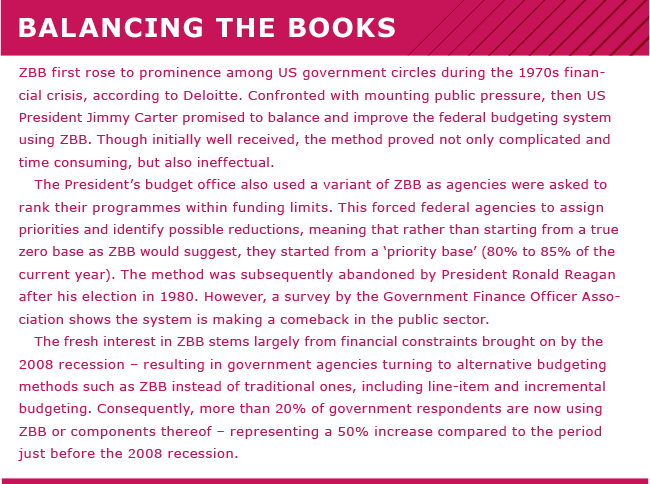