In the current times of political and economic uncertainty, many South Africans are looking for ways to vary their investment portfolios. As such, buying property abroad – particularly in countries that offer residence and/or citizenship by investment programmes – is becoming an increasingly attractive option.

Henley & Partners – a residence and citizenship planning firm that operates globally – currently offers seven citizenship and more than 20 residence programmes. The company’s senior manager Sandra Woest explains the difference between the two. ‘Residence by investment is like when you stay in a guest house or hotel. As long as you pay, you have authorisation to remain in that hotel room. Your stay could even come with privileges to have authorisation to move through a bigger area – for example, residence in Portugal gives you authorisation to work, study or stay in Portugal as well as to move freely through the Schengen areas as a tourist.

While many have been around for two decades or more, residence and citizenship programmes have become increasingly popular in recent years – particularly for South Africans. ‘I think the biggest reason is that people realise it’s a global world,’ says Woest. ‘Entrepreneurs and business people do a lot of cross-border business. They like to have their children educated in a more first-world country, they take international holidays, and they want security, stability and mobility.

‘We live in a rapidly changing world – be that because of government, nature, terrorism or other factors. People want the security of knowing that they can move their family instantly,’ she says, adding that other key reasons for participation in such programmes include foreign investments, asset portfolio diversification, tax planning and visa-free travel.

Lew Geffen, chairman of Lew Geffen Sotheby’s International Realty, says that while ‘golden ticket’ property investment is something many South Africans with means are considering, things are not as simple as they were a few years ago, ‘when there was the luxury of destination choice when buying property to obtain permanent residence in another country’.

Geffen cautions interested individuals to think carefully about where they want to invest their money and explains that in this regard, emerging markets make much more sense for South Africans because our currency stretches a lot further. ‘With the rand this low, the smart money will look at emerging markets with potential, rather than older, established markets where one is purchasing in euros,’ he says.

One of the most popular destinations for South Africans going the residence-by-property-investment route is Mauritius – a short four-hour flight away. The country is rated by the World Bank as the easiest place in Africa to do business, and by the African Development Bank as the most competitive economy in sub-Saharan Africa. Furthermore, the Mauritian government expects foreign direct investment (FDI) to increase by as much as 46% this year.

According to Timo Geldenhuys, director of Sotheby’s Realty Mauritius, the country was one of the first to offer residence by investment opportunities with the government approving this in 2002. Previously, foreigners could buy property under the Integrated Resort Scheme (IRS) and Residential Estate Schemes. Last year the two schemes were merged into the new Property Development Scheme to streamline the process of foreign property ownership. 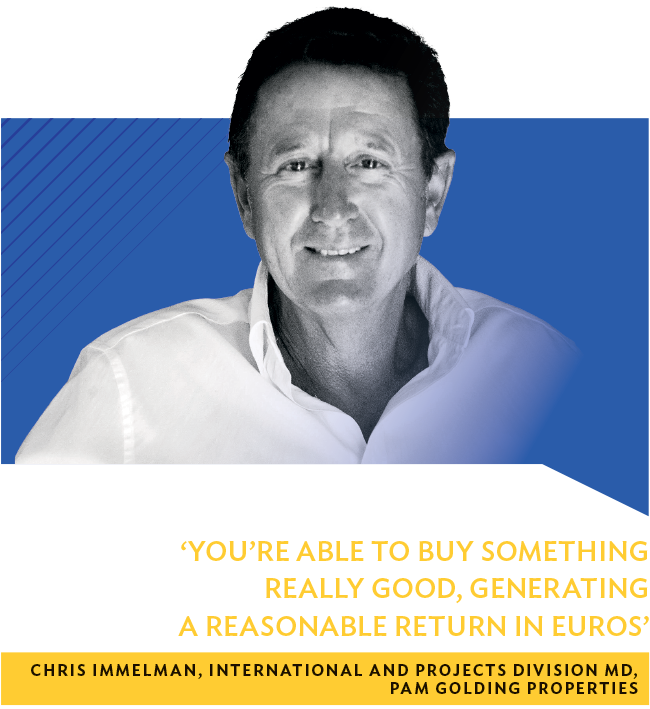 Statistics from the Mauritian Board of Investments show that 30% of foreigners who have thus far bought property in the IRS on the island are from SA, 37% are from France and 20% from the UK. International buyers can become permanent residents once they acquire a property with a minimum investment of $500 000. And the process is fast too, taking between six to eight weeks only.

Geldenhuys notes that while it has become more expensive to invest, given the depreciation of the rand, plenty of South Africans continue to choose Mauritius, perhaps largely due to its proximity to home and its various fiscal benefits, including an appealing tax rate of 15%.

‘There’s no capital gains tax, dividends tax or inheritance tax. All this plays into the hands of corporates and individuals who want to come here and set up shop through business or corporate investment,’ says Geldenhuys. ‘Mauritius is a tried and proven process. It works. Over time, the process hasn’t varied too much. They haven’t changed the rules – what they’ve promised from day one still holds true.’

Another very popular destination for South Africans – and one that offers a route to citizenship – is Portugal. According to Chris Immelman, MD of Pam Golding Properties’ international and projects division – which currently offers programmes in Mauritius, the Seychelles and Portugal – the firm has seen a marked increase in interest in both residence and citizenship by investment initiatives over the last 18 months, but most notably for Portugal.

‘While Portugal’s programme is a good one and very enticing to South Africans, the underlying investment that you make is also very good. You’re able to buy something really good, generating a reasonable return in euros, and it offers very good medium- to long-term capital appreciation opportunities,’ he says.

Immelman adds that the distinguishing factor between Portugal and Mauritius is that to qualify for residency in Mauritius you need to spend $500 000, but can only buy in designated schemes. ‘It is therefore priced in. So your villa or apartment is more expensive than if a local Mauritian had to buy something of an equivalent nature, because included in there is the right for you as a foreigner to become a resident of that country. The same is not true of Portugal,’ he says. 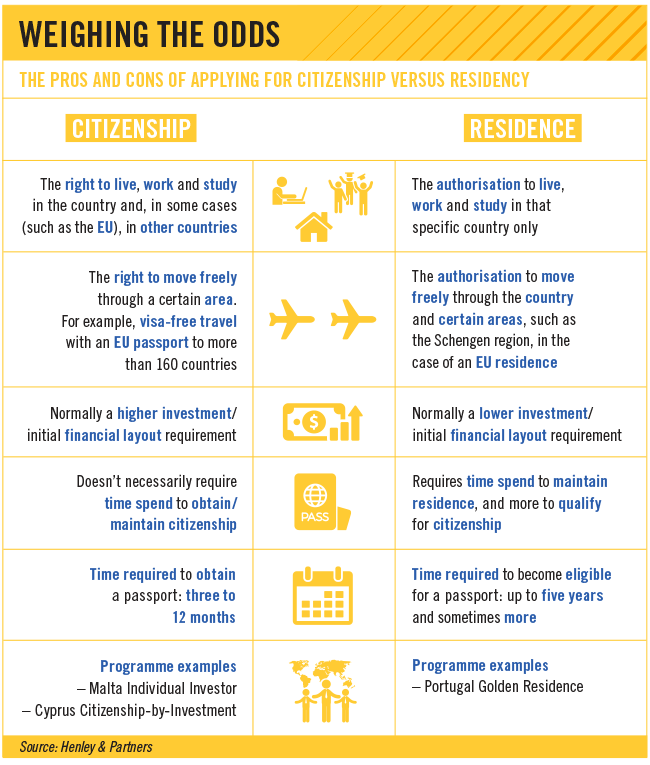 ‘We sell properties in Portugal for €250 000 or €750 000 because they’re a good investment. It just so happens that if you spend €500 000 or more you qualify to enter the “golden visa” programme. So you’re not paying more for that property just because it has a residency component attached to it.’

While there are indeed plenty of benefits to reap from such programmes, least of all visa-free travel for many of them along with a currency hedge, there are some things to watch out for. For example, children are eligible for residency only for as long as they are dependents, after which time they’re on their own. This is the case in both Mauritius and Portugal – unless of course you acquire Portuguese citizenship.

Woest’s advice is to do your homework as thoroughly as possible and partner with a reputable organisation. ‘Currently there are more than 100 programmes around the world. You need to be sure of what the requirements are for each. You must know the risks and the benefits, what you need to put in and what added criteria the government needs you to show.’

Geffen agrees. ‘The rule of thumb for any South African looking to obtain foreign permanent residence through property ownership is do your homework, then do it again. Can you take your business across, join a company there or invest in existing businesses? If you have a family, are there good international schools and satellite campuses of internationally recognised universities?’

He also notes the importance of considering the various tax implications, ‘because you’ll probably have to spend more time there than in South Africa if you want to benefit from more relaxed tax laws like Mauritius, where both personal and corporate tax is pegged at 15%’. In such instances, says Geffen, not adhering to the residence conditions and spending too much time out of the country could cost you dearly, so planning ahead is critical.