The sub-Saharan Africa growth story remains compelling. Many of the economies are growing at 4% to 6% a year, compared to the much slower GDP growth in developed markets. Young and growing populations make for positive demographics. The increasing trend towards urbanisation combined with an expanding middle class with more disposable income is creating attractive consumer markets across the continent.

Private equity is often better able to take advantage of these African opportunities than listed equity. Many of the continent’s capital markets lack depth and liquidity, with limited numbers of listed entities available. The exception is SA’s JSE.

‘With African capital markets still developing and deepening, private equity plays a notable role in mobilising capital flows into and through the African continent,’ says Erika van der Merwe, CEO of the Southern African Venture Capital and Private Equity Association (SAVCA). ‘Access to capital is a key enabler for business expansion, which is one component of a private equity partnership with business owners.’

Despite difficult global economic conditions and the decline in commodity prices that has negatively impacted some African countries, particularly Nigeria and Angola, private equity investment in sub-Saharan Africa is growing.

International private equity has grown fivefold since 2008, with a total of $50 billion of inflows to Africa, says Tyson, who adds that this has been driven by ‘bullish investor sentiment about the growth prospects in the region – colloquially known as “Africa rising” – as well as a search for alternative investments because of weak economic growth in advanced economies’.

The Emerging Markets Private Equity Association (EMPEA), based in Washington, says its members raised $3.6 billion for sub-Saharan Africa in 2015, the second-highest annual fundraising total for the region since the association began tracking fundraising in 2006. The highest was in 2014, with a total of $4.3 billion raised. Investors were, however, more cautious when it came to actually investing the funds, with fewer deals and less capital invested in 2015 compared to the previous year. This may also be due to a lack of suitable businesses to invest in, with many sectors dominated by small family firms. They often lack the scale and management expertise to make them attractive.

EMPEA members are largely based in the US. Closer to home, SA investors are also allotting more money for the rest of the continent.

As one of the Deloitte survey respondents says: ‘We’re not even in chapter one of private equity in Africa. It’s more like the prelude. We hope all the major firms will be there in five to 10 years.’

Africa’s medium- to long-term attractiveness relative to emerging and developed markets is a key reason for the growing appetite in private equity, according to the latest African Private Equity and Venture Capital Association’s (AVCA) annual survey.

Nigeria, Kenya and Ethiopia were the most attractive investment destinations (SA ranked at number five), according to the respondents, who were largely global institutional investors. West Africa accounted for most of the deals done between 2010 and 2015, says the AVCA.

As one of the continent’s largest economies, Nigeria is considered to be the most attractive destination for the coming three years, despite its faltering growth due to ongoing low oil prices. In West Africa, Côte d’Ivoire and Ghana are also starting to look inviting. 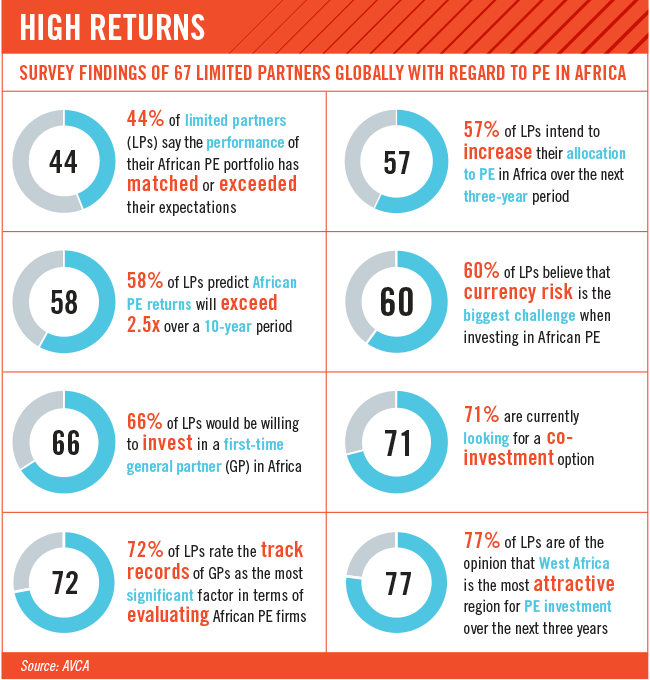 Van der Merwe points out that private equity investors have long-term horizons and are therefore not easily deterred by some of the difficulties that have faced African markets recently. ‘Private equity managers by nature look beyond short-term, cyclical developments and focus on the medium- and long-term potential of businesses and markets in which they invest. There remains tremendous optimism about the investor appeal of a number of economies in East and West Africa,’ she says.

On the other side of the continent, the rapidly expanding Ethiopian market is viewed with growing interest. The Deloitte survey found similar trends, though respondents also mentioned Tanzania and Uganda. East Africa’s growing population and middle class are expected to boost the financial services, agriculture, manufacturing, healthcare and pharmaceuticals sectors, making them popular investment choices. ‘Growth in the region is underpinned by ongoing investments in infrastructure and sound economic policies,’ says Deloitte.

SA, Botswana and Namibia remain the most popular destinations for investment in Southern Africa, according to Deloitte. Here the investment focus is mainly on asset-backed industries such as food and beverage, manufacturing and healthcare.

Across Africa in total, the energy sector has attracted the most funds. It drew 53% thereof – some $7.9 billion – between 2008 and June 2015, driven by a few large transactions. For example, Blackstone (one of the world’s largest alternative asset managers) has invested $5 billion in a number of projects, including a hydropower plant in Tanzania and one to supply power to Burundi and the DRC.

The financial sector has also been popular, attracting 16% of funds – or $2.4 billion over the same period. This includes $1.4 billion to Union Bank of Nigeria by Atlas Mara, the African investment vehicle co-founded by ex-Barclays chief Bob Diamond.

The AVCA found that African-based investors were most interested in infrastructure and real estate deals. Overseas investors were more likely to rate the consumer industry as the most appealing. 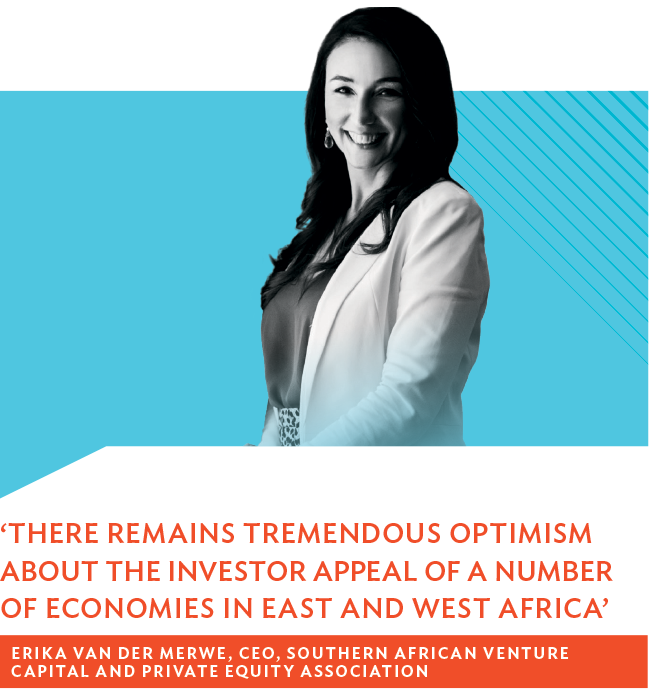 Linington says SA investors generally favour the banking, financial services and insurance, retail and infrastructure sectors, each of which attracted around 15% of total investments made in 2015.

Private equity investments tend to involve more than just the transfer of capital. Investors become actively involved in the management of the businesses they have invested in, which assists in boosting management capability and building skills. They help develop the investments into more sustainable, better-run businesses, ensuring they make a good return while leaving the business stronger and more resilient.

‘Family-owned businesses, for instance, benefit from the direct access to the networks, knowledge of corporate governance, strategic insights and guidance through innovation that private equity provides,’ says Van der Merwe.

Research conducted by the SAVCA and Development Bank of Southern Africa in 2013 found that private equity had helped SA businesses grow faster, create much-needed jobs and improve their governance structures. Private equity’s role in strengthening the private sector has a knock-on effect on job growth and productivity, as well as technology and knowledge transfer, says Tyson. This in turn boosts economic growth. ‘Moreover, the key advantage for development of private equity funding is the willingness to finance “high risk” countries, sectors and projects that, by definition, are also those facing financing constraints,’ she says, adding that private equity directs capital to sectors that struggle to raise finance, yet are developmentally important.

This includes financing the energy sector, which positively affects economic growth. In the case of clean energy projects, this can also be beneficial for the environment.

‘Private equity, with its high risk appetite, has used approximately 87% of its funds for sectors with high development impact and 69% for countries facing high financial constraints. It creates limited risks to financial stability while also introducing knowledge and technology transfer,’ she says.

Private equity is expected to grow, especially as more pension funds begin venturing into this asset class. This is indeed good news for a continent needing capital to grow and thrive.