African expatriates and home-grown talent are defying outdated recruitment ideas to fill the continent’s top corporate positions. ‘It’s a myth that expat leaders originate mostly from Europe, Asia and the US,’ says executive head-hunting firm Jack Hammer in its annual Africa Report, which, in its fourth volume, has shifted the focus from SA to the unique recruitment challenges of global multinationals expanding into the rest of the continent.

The study shows that 75% of executives are African nationals and that 30% of all expat leaders are from another African country or from the returning African diaspora. It also found that the general sense of the continent’s ‘small pool of talent’ is a misconception. ‘Big business would do well to thoroughly investigate all their options based on up-to-date facts,’ says the Cape-Town head-quartered firm, which has offices across Africa and serves large global investors (based in the UK, Europe and US), as well as SA investors with operations in various African countries.

‘The data shows that there is a market of top African talent with the right leadership credentials across the continent. Many of these leaders are currently working in multinationals around the world, and it’s particularly these individuals who are in hot demand to fill key leadership roles in
their home countries.’

Companies need to take a more aggressive and proactive approach to attract the best African nationals for new projects and expansion, says Sarah Fitzgerald, MD of Executives in Africa – a London-based recruitment specialist with a large African footprint. According to Fitzgerald,    high-potential local talent is often not actively seeking new positions, as these men and women tend to be well nurtured in their current positions – which breeds corporate loyalty.

‘The best African nationals often remain under the radar, unable to be accessed through advertis-ing or local recruitment firms working purely on a contingent basis. The result is a common misconception that there’s no good talent in Africa,’ she says.

Danelle van der Merwe, senior executive search associate for African markets in banking and investments at CA Global – which specialises in recruitment in Africa – says social media and the internet are making it a lot easier to find and approach candidates working outside their home country. Also, having an established network in place is of utmost importance.

‘We’ve found that over the past couple of years diasporas are much more willing to come back home, wanting to be part of the growth of Africa. We find that in Africa, people are more willing to look at new opportunities and to consider relocation,’ says Van der Merwe.

In addition to the increasing mobility of SA and African professionals, companies are recognising the value of appointing locals who generally adapt more easily to the context of other African countries than overseas expats, according to Jack Hammer. ‘There is a very real risk that the expat may struggle in the new environment and be unable to rise to the challenge of the role, or even carving out a new life in the country of resettlement.’ 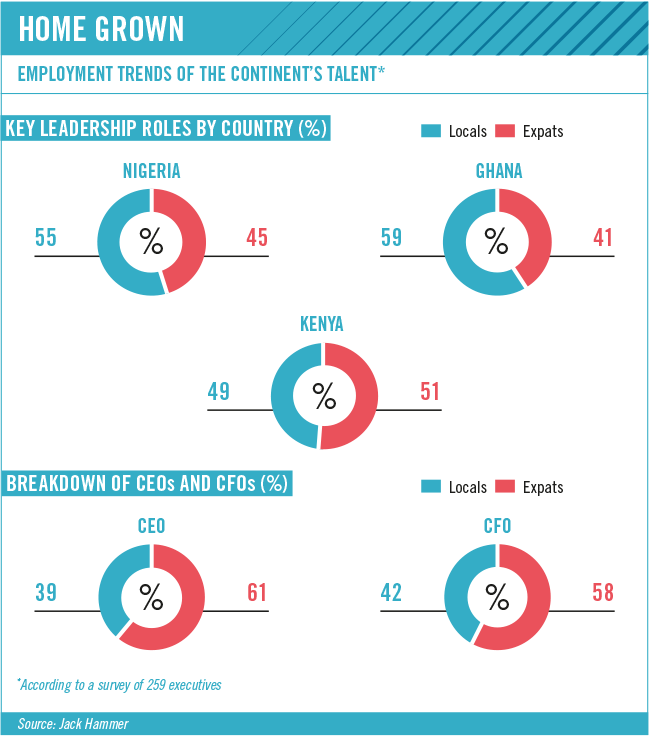 However, for top-level appointments, expats are still being seen as the safe, conservative choice, with 61% of CEOs in Africa being expats. ‘Allocating trusted, known leaders to new markets addresses one element of perceived risk for an organisation, offering reassurance and peace of mind,’ says Jack Hammer. The company also lists three reasons why multinationals still hire expats: to ensure that the organisational culture translates into the local context; to leverage institutional memory; and as career development for leaders within the organisation.

In many cases, expats still play a vital role in local skills transfer. While they are sometimes used as a mere stop-gap, they often form part of a co-ordinated talent deployment and development programme.

Some companies are so adamant about localisation that they demand creative solutions from their executive recruiters. Fitzgerald gives the example of a downstream oil and gas company that wanted to fill a very senior pan-African technical role.

‘Owing to the previous reliance on expats for senior technical positions in this sector across Africa, when we mapped the market, the reality was that the most senior position in this sector was still held – almost without exception – by an expatriate,’ she says.

‘The client decided to stick by their localisation strategy and split the position into two roles, which enabled them to appoint an African national, who had demonstrated the potential to grow into the more senior position with the right professional support.’

This is in line with business services firm EY’s prediction in a 2014 report outlining Africa’s ‘war for talent’. It stated that organisations would   decrease their dependence on expats by building local capacity and transferring skills.

Perhaps more surprising, multinationals are no longer using SA as the obvious port of entry into Africa – they’re rolling out operations directly in other parts of the continent. This is likely to be a result of pull factors rather than push factors, says Debbie Goodman-Bhyat, Jack Hammer CEO.

‘In the past, South Africa was very competitive, but there has been a levelling of playing fields as well as other more attractive growth markets for investors. Companies are now looking for country managers, executive leadership teams and sales offices based elsewhere on the continent because they realise the value of having a physical presence.’ 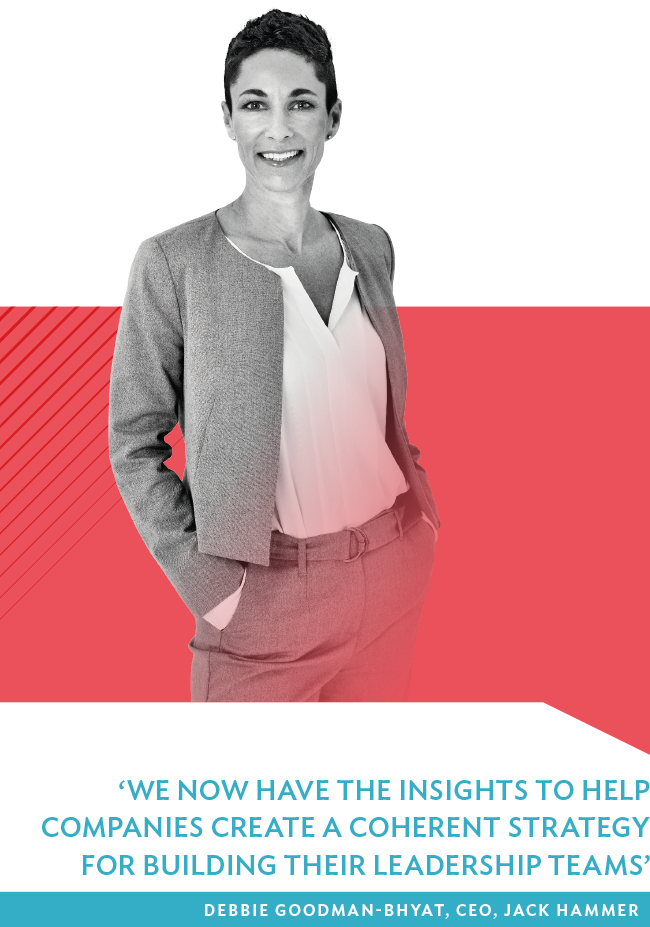 She adds that the obvious traditional sectors of natural resources continue to yield opportunities, but there was also ‘a very buoyant market in particularly Egypt, Kenya and Nigeria in fintech, the digital space and renewable energy throughout the continent as well as investments in “old” industries – education, agriculture, healthcare – where there are new tech innovations’.

Van der Merwe notes a move by companies to enter and build businesses in countries that have previously been overlooked by investors or were difficult to enter, such as Ethiopia. ‘Clients include local and international banks, private equity firms, asset management firms, development finance institutions, insurance companies, and audit and consultant firms,’ she says.

Meanwhile, Fitzgerald says Executives in Africa, sees most demand for talent in emerging and rapidly developing industries and sectors such as technology, modern retail, real estate and renewables. ‘The types of clients seeking to recruit across Africa currently, generally fall under the categories of innovator and disruptor businesses, such as fintech companies, the most obvious of which is the mobile money sector.

‘Many of these start-up businesses are backed by huge investors looking for returns, but also driven by a passion to make an impact on the continent. With this often comes a strong desire to hire local African nationals in key leadership positions. For example, we recently placed a female Zimbabwean CEO – headhunted from a business in Rwanda – in a mobile money business in Ethiopia.’

Another niche sector experiencing demand is the ‘hard discounter’ retail model that has proved so successful in Europe with companies such as German multinationals Aldi and Lidl, explains Fitzgerald. ‘Businesses like Shoprite and Game have had success across sub-Saharan Africa in recent years but are aimed at a more middle-class consumer, whereas the new hard discounter models are targeting the mass market shoppers. This specific model is considered as offering a real opportunity to attract consumers away from the traditional “market” shopping into a modern retail environment.’

Executive recruiters admit that sourcing talent in Africa is arduous, with basics such as telephone and Skype interviews interrupted by poor connections. But, as Goodman-Bhyat sums up, expanding into Africa and growing a sustainable business is no longer an obscure exercise. ‘We now have the insights to help companies create a strategy for building their leadership teams and the talent to realise that strategy.’

As the pool of high-calibre candidates grows, African nationals are ready to make a difference. Now they just need to be entrusted with key leadership roles.