Fancy yourself a gourmand? Celebrity chefs from Nobu Matsuhisa to Marco Pierre White have outposts on board leading cruise lines. Theatre-lover? West End and Broadway-style productions – the calibre of Jersey Boys and Kinky Boots – have become staple fare on larger ships, where theatres can seat more than 1 000 people. Adrenaline junkies can get their fix with rock climbing, go-karting and towering water slides, while the more culturally inclined will love Cunard’s curated selection of expert guest lecturers.

That’s all before you’ve even stepped ashore of course. While cruise companies find no shortage of takers for itineraries exploring the historic capitals of the Mediterranean or the sun-soaked Caribbean islands, increasingly they are touting the merits of being on board first, and the destination second. ‘We’re not competing with other cruise lines. We see our competition as other land-based resort holidays,’ says Nick Wilkinson, Norwegian Cruise Line (NCL) vice-president and MD of its UK, Ireland, Israel, Middle East and Africa operations. ‘We regard our ships as floating resorts.’

And on that score it’s perhaps hard to compete. Combine the value and ease of an inclusive resort stay with a sense of easy-going adventure? It’s not hard to see why the cruise industry is booming, with more than 30 million passengers worldwide expected to step aboard a cruise ship in 2019. ‘The value proposition that a cruise holiday offers certainly makes it a rewarding holiday option for South Africans,’ says Thaybz Khan, head of product at Cruises International. ‘We describe a cruise as a “recession-proof holiday”.’

While the US is the largest single market for cruise holidays, there’s certainly no shortage of interest from local travellers. ‘African travellers are joining the millions of cruise-goers who holiday at sea each year,’ says Wilkinson, adding that SA is the largest source market on the continent for NCL, and globally the second-largest market for meetings, incentives, conferences and events bookings. NCL is also tapping into the wider African market, seeing demand growing from the likes of Namibia, Kenya, Botswana and Nigeria. 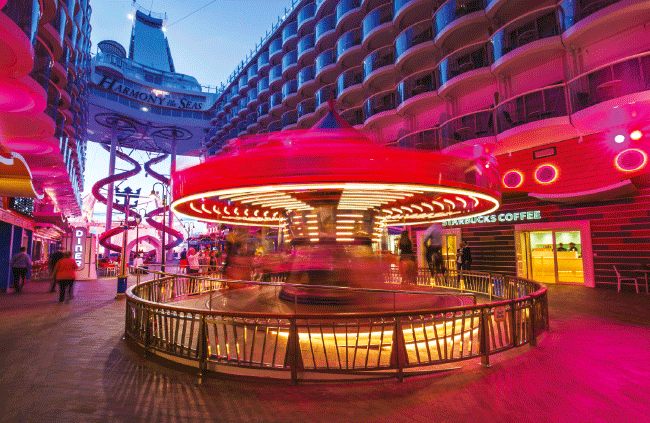 Along with introducing more bells and whistles to entertain travellers, a key trend in the cruise industry right now is the deeper adoption of technology on board. While robot bartenders were little more than a parlour trick when introduced on Royal Caribbean’s Harmony of the Seas, immersive technology is fast making its way onto the high seas.

Over the past two years MSC Cruises has been rolling out wearable technology across its fleet, starting with the MSC Meraviglia. ‘Like smart, connected cities, but with the added complexity of being at sea,’ is how Luca Pronzati, chief business innovation officer at MSC Cruises, describes the new ships. Using radio-frequency identification chips in wearable wristbands, passengers can unlock their cabin doors, make payments and navigate the ship with ease, while the associated mobile app allows guests to make dinner reservations and book excursions without waiting in line.

Carnival Cruise Line’s Ocean Medallion offers similar functionality, with clever service innovations such as its drinks ordering facility: use ‘Here & Now’ to have them delivered wherever you are on the ship, or tap ‘There & Then’ to get them later. MSC also offers specialised Bluetooth-enabled wristbands for young travellers, allowing parents to geo-locate their children anywhere on board. 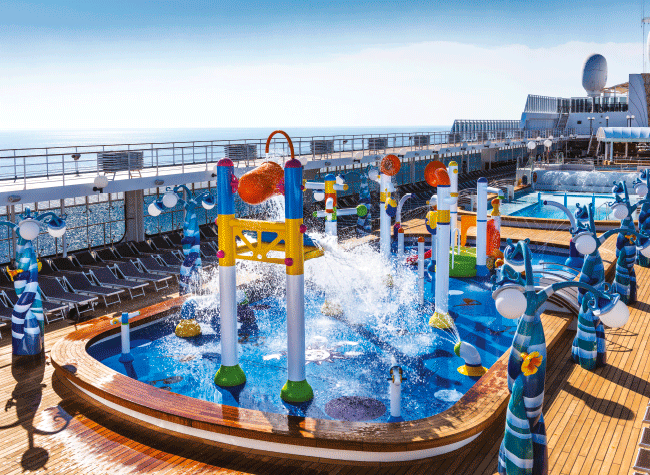 Hand in hand with technology is an increased drive towards sustainability, as cruise companies look to minimise their environmental impact. When the brand-new Costa Smeralda debuts later this year it will entertain its 5 200 passengers with water slides and a glass-bottomed skywalk, but it’ll also be the first large cruise liner to power its engines using liquefied natural gas. Hurtigruten’s MS Roald Amundsen, which was launched in July 2019, is the world’s first hybrid-electric cruise ship. With fuel consumption and CO2 emissions reduced by up to 20%, and the ability to run almost silently in noise-sensitive areas, it is custom-built for polar cruising.

Expedition cruising is another niche showing strong growth, driven by both a maturing cruise market eager for new destinations as well as Generation Z and millennial travellers in search of unique experiences, not the ho-hum of a jaunt through the Caribbean.

Ticking off the bucket list – and sharing it on the ’Gram, of course – was one of the key trends highlighted this year by the Cruise Lines International Association (CLIA), the world’s largest cruise-industry trade association. ‘Travellers are setting sights on destinations that were previously out of reach – some only accessible now by cruise ship – from the Galapagos Islands to Antarctica,’ notes the Cruise Trends and Industry Outlook report. And there’s no shortage of lines happy to take well-heeled travellers off the beaten track. Hurtigruten, for example, offers memorable itineraries exploring the fjords of Norway and the distant Svalbard Archipelago, with the unique  opportunity to see the Northern Lights in the winter months. Hurtigruten is so confident that the Aurora Borealis will make an appearance during one of its 12-day voyages, it offers guests a free cruise if it doesn’t. Ts & Cs apply, of course.

Down south, Aurora Expeditions is shaking up the world of Antarctic cruising this season, with an array of polar experiences aboard its latest vessel Greg Mortimer. Along with sightseeing cruises off Antarctica, guests on board can camp out on the ice for the night, ski onto empty ice shelves, trek across South Georgia Island and snorkel in frigid polar waters. 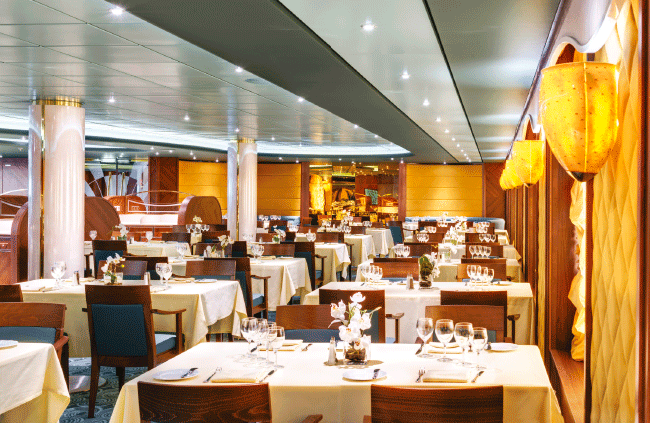 Sustainability is especially pertinent in these southern seas and the new ship boasts impressive design innovations, from bow technology that reduces fuel consumption to ‘virtual anchoring’. Instead of a steel anchor clunking onto the sensitive seabed, satellite positioning and thrusters are used to keep the ship stationary. But if you’re a first-time cruiser and don’t want to gamble the cost of a long-haul airfare on your first high seas holiday, the local cruise industry is as buoyant as can be. MSC Cruises has almost single-handedly developed the cruise market in SA, each year bringing ships from Mediterranean waters to cruise the seas off Southern Africa between November and April.

While these mid-size vessels may not boast the bells and whistles of larger ships homeported in Europe or the Caribbean, they have proven enormously popular with local travellers, offering value for money and a taste of an exotic holiday close to home. For repeat cruisers, part of the appeal is the ever-changing roster of ships appearing in local waters. While the MSC Opera, Sinfonia and Musica have all sailed here in the past, this November the 2 550-passenger MSC Orchestra will make its maiden voyage to SA, offering three-, four- and five-night trips out of Durban and Cape Town. 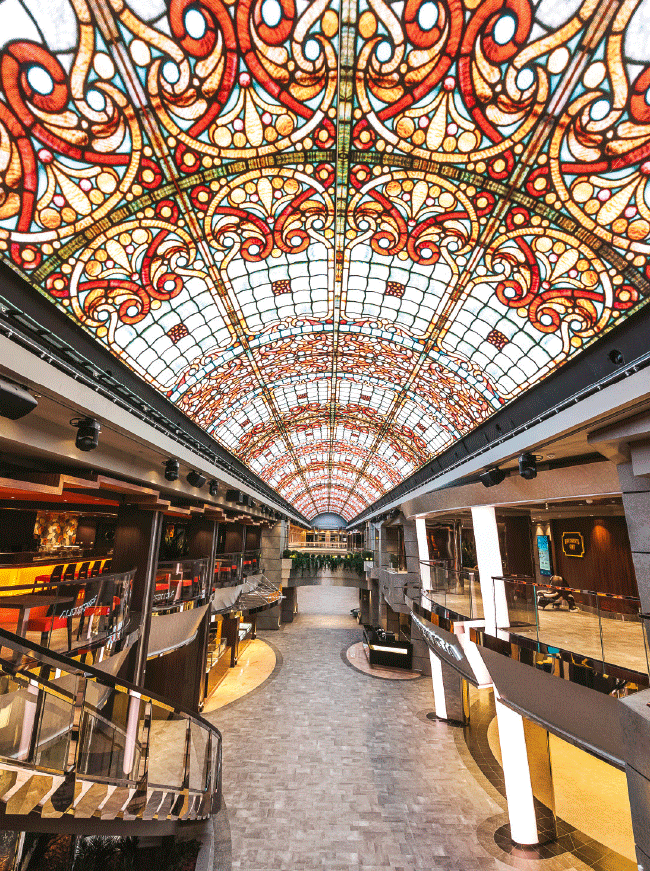 Unsurprisingly it’s the cruises north out of Durban, into the warm tropical waters of Mozambique that are particularly appealing. ‘Our most recent season saw a 25%increase in guests compared to the same period in 2017/18,’ says Ross Volk, MD of MSC Cruises South Africa. ‘MSC Cruises has been bringing bigger and better ships to this country and enriching our itineraries as more South Africans are realising that a cruise is an affordable, convenient and exciting holiday option.’

And MSC isn’t scared to put its ships where its marketing is. In the 2020/21 season MSC will, for the first time, bring a pair of ships to SA to cater for ‘the significant growth in demand we have seen in our guest numbers over the past few years’, says Volk. From December 2020 until March 2021, the MSC Opera, which was refurbished in 2014 and can accommodate 2 550 passengers, will be home-ported in Cape Town, while the MSC Musica will sail a range of itineraries out of Durban. 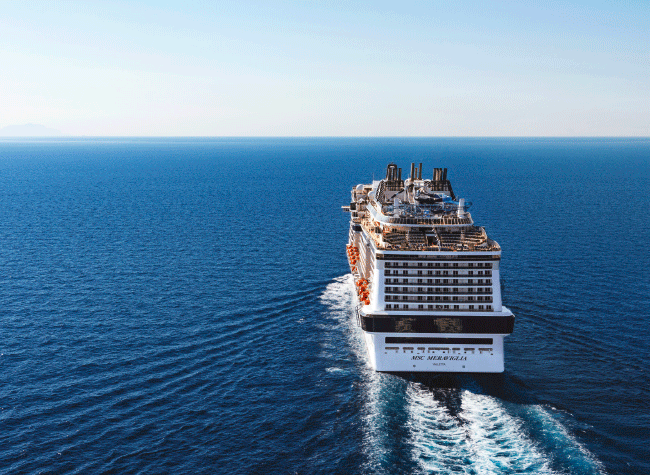 Durban is also entrenching its position as the cruise hub for Southern Africa, with MSC investing R200 million in the construction of a new cruise terminal. While the new terminal, set to open in January 2021, will be an obvious boon to MSC’s Southern African operations, ‘this multi-user terminal will make Durban an even more desirable destination for cruise ships from all over the world’, adds Volk.

As international cruise lines increasingly make their way to local waters, the world of high seas cruising is getting easier – and cheaper – to discover. All that’s left is for you to book a trip, and wave bon voyage.