Shot in the arm - JSE MAGAZINE

In his 2008 Budget Speech, then Minister of Finance Trevor Manuel acknowledged the need to open up access to equity finance for SMEs in high-tech sectors and the junior mining exploration industry. So it came to be that Section 12J was written into the Income Tax Act and took effect on 1 July 2009. The new law enabled investors to obtain an upfront tax deduction on any amount invested in a venture capital company (VCC).

There wasn’t much uptake in the first few years of Section 12J as the deduction was only temporary relief with recoupment of these deductions when investors exited the fund. SARS eventually amended the legislation, saying that as long as investors stayed in the fund for five years or longer, no recoupment would occur.

Etienne Louw, senior manager at Mazars, explains the legislation in its current form. Say, for example, an investor falls within a marginal tax bracket; if they invest R1 million in a VCC, the full amount invested can be deducted. Furthermore, assuming a taxable income of R2 million, their tax owed will drop from R900 000 to R450 000. Through this process the VCC company obtains funding, enabling it to invest in a qualifying company. And this is the ultimate aim of Section 12J, to fund small businesses, which, in theory, will eventually lead to job creation and greater economic growth. ‘Through Section 12J, government has successfully created a vibrant SME sector,’ says Johann Kritzinger, CEO of tax consultancy Nreach One. ‘Capital flowing to SMEs has been significant in stimulating this sector of the economy, which receives little or no support from traditional capital markets – amounting to an injection of R6 billion.’

According to venture capitalist and CEO of MyGrowthFund Vusi Thembekwayo, ‘trusted and established VCC funds exist to turn start-up businesses into investor-ready professional outfits, with systems and structures in place. These funds that are in it for the long-haul will frequently have skin in the game, investing in the innovators alongside corporate or pension fund investors’.

Section 12J does, however, come with its string of caveats. Natasha Wilkinson, tax attorney at Tax Consulting SA, explains a few of the intricacies. Section 11(a) of the act, for example, stipulates that the expenditure incurred by an investor in acquiring shares, which are held on capital account, is not deductible from income, she says. 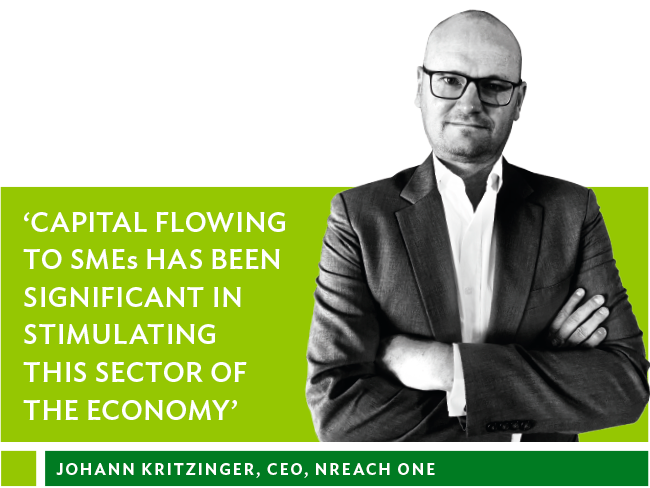 Section 9C(5) of the act reinforces this by stating that, subject to certain exceptions, where equity shares are held for at least three years and are disposed of by a taxpayer, the expenditure or losses incurred, which was allowed previously as a deduction, is included in the taxpayer’s taxable income. ‘There are many such intricacies involved in the VCC regime and it is always best for investors to obtain thorough advice from a tax attorney to establish whether the VCC regime is available and whether there may be a better tax-saving tool available,’ says Wilkinson.

These furthermore include directions from SARS on which VCCs to invest in, what qualifies as an equity share, and which companies qualify for investments from VCCs. For example, investors must ensure they invest only with a SARS-approved VCC whose approval status has not been withdrawn – this list can be found on the SARS website. If the approval status has been withdrawn, the VCC must include in its income the amount equal to 25% of the expenditure incurred by any person for the issue of shares held by the VCC. For the investor, this withdrawal may also result in their investment no longer qualifying for deduction under Section 12J.‘Taxpayers should be mindful that aside from the myriad requirements set out above, Section 12J in itself also contains measures that either limit the deduction available or give circumstances where the deduction will not be available,’ says Wilkinson.

For companies to become a Section 12J VCC, they must be licensed by SARS and the FSCA, and if the investor happens to interact with a Category 2 financial services provider (FSP), they should take comfort that this type of FSP is a full discretionary asset manager, says Kritzinger.

Shakes Motsilili, CEO of Alumni Energy Investments, a registered Section 12J VCC, advises that due diligence is key when deciding on this type of investment. ‘Investigate the team and underlying companies, and be aware that this is an illiquid investment where you will only see the benefits in five years or more.’

At high-level there are three key considerations that investors should be cognisant of, says Louw of Mazars. Firstly, be aware that this investment is locked in for at least five years. ‘Essentially, if an investor decides to exit from the VCC within the five-year period, there will be recoupment.’ Secondly, investors should note that their equity investment in the VCC will not have any base cost. ‘Based on the eventual exit from the VCC share, the full amount received will be subject to capital gains tax, assuming the shares are held on capital account.’ And lastly, investors need to be sure about the exit strategy of the VCC. ‘So-called second-hand VCC shares may not be sought after, as investors will only obtain the tax deduction if they subscribe to shares in the VCC, as opposed to buying shares in a VCC from an existing investor,’ says Louw. Then there is also the issue of the sunset clause written into Section 12J, which takes effect on 30 June 2021. 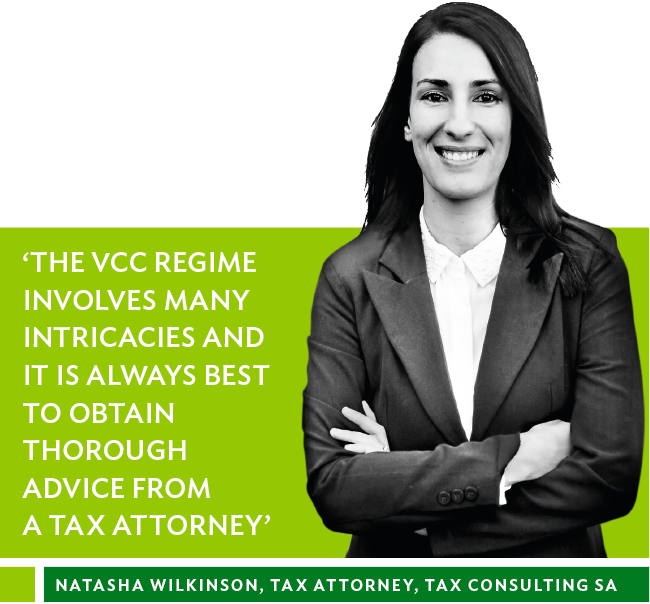 Kritzinger says a Section 12J investment should not be about the tax break and its promotion, but rather the risk-adjusted return and impact achieved. ‘Consider this when choosing between the myriad Section 12J VCCs out there – the biggest is not always the best,’ he says.

SARS has made changes to this legislation almost every year since its inception, but until now the changes have been more focused on eliminating shortcomings to accelerate uptake, which has had a salutary effect. Both the number of registered Section 12Js and the capital invested have doubled year-on-year for the last four years, notes Kritzinger. Today, there are 165 registered Section 12Js and almost R7 billion invested.

The last round of changes has focused on curbing abuse and ensuring that Section 12J VCCs raise funds, ‘and deploy in line with the spirit of the legislation’, according to Kritzinger. The suggested change is mainly aimed at protecting the fiscus in the short term, he says. ‘Due to the 12J Association of South Africa’s healthy relationship with SARS, conducive to suggestions and rationale, the R2.5 million cap will most probably be adjusted.’

He argues that there should at least be two caps – one for an individual investor and one for a corporate investor. ‘These schemes are complex but involve, among other things, different classes of shares. In February 2019, Treasury proposed making sweeping changes to the VCC legislation to counter these abusive schemes, but these were withdrawn following representations,’ says Louw.

One possible effect of this cap on investments is that the amount of money invested in VCCs is likely to decrease, he says. Motsilili says many VCCs have not embraced the spirit of Section 12J. ‘They have attracted already wealthy investors into property and other similar investments, whereas 12J was always about enabling high-risk companies to innovate with a tax-based investment from the private sector,’ he argues. ‘So, the law needs to change.’

There are going to be unintentional repercussions from the proposed changes. Motsilili says the proposed changes to the maximum investment will hamper capital-intensive companies operating in the mining sector, along with VCCs like his that invest in these companies. SARS’ final decision on this issue will soon be published.

Kritzinger remains positive. ‘The industry has shown before that it is resilient and very adaptable to curve balls coming from legislative changes. All the Section 12J asset managers are passionate about making a difference in employment in South Africa.’ As at February 2019, there were already about 3 000 pioneering investors and believers in Section 12J. The industry needs more of these investors, says Kritzinger, because ‘once invested, they soon realise that “venture capital company” means managing investments conservatively in high-growth, high-impact environments’.