What do Elon Musk, Jeff Bezos, Oprah Winfrey, Arianna Huffington, Larry Page and Rupert Murdoch have in common? Well, yes, they’re uber achievers in the boardroom. But they also happen to have dabbled in meditation – or, in some cases, sworn by it to have given them the edge in reaching the top of the pile.

Take media mogul Huffington, who has described her early-morning yoga and meditation sessions as two of her ‘joy triggers’, according to Vogue magazine. She has also reportedly introduced meditation at her AOL Huffington Post Media Group, offering employees free weekly classes.

Closer to home are aficionados such as SA businessman Adrian Jacobs – a former international oil trader who started Mindful Revolution. The company brings together various disciplines and practitioners to tackle stress with the aim of increasing effectiveness and resilience in the workplace through mindfulness and meditation.

Jacobs, who had previously been living in London, was himself a sufferer of acute stress and hypertension. He tried meditation and became a convert. Jacobs told the Financial Mail that mindfulness had changed his life. ‘I know first-hand how effective it is,’ he said.

Another of SA’s early adopters is actuary-turned-management consultant Taddy Blecher, who – in the late 1990s – co-founded CIDA City Campus, an almost-free business university in Johannesburg for students who couldn’t afford higher education.

Blecher spent four years teaching transcendental meditation in township schools – something he strongly believes is a tool that can change lives.

While many business people still dismiss the M (meditation) word as New Age hocus pocus – eschewing this gentle art for more obvious stress-busting pursuits such as high-intensity exercise and extreme sports – it’s becoming more mainstream. And in many cases, it’s an integral part of corporate-wellness programmes – blue chip and otherwise. There’s a desperate need for it as the SA economy reportedly loses between R12 billion and R16 billion a year as a result of absent workers, according to Occupational Care South Africa and Statistics South Africa.

Meditation has now gone way beyond being the next big thing. In 2014, it fronted Time magazine, with the cover line: The Mindful Revolution – the science of finding focus in a stressed-out, multitasking culture. It has also featured as the lead story in the New York Times and Huffington Post.

SA media have evangelically covered this emotional-wellness topic too, as seen in the Financial Mail (Mindfulness: being there is here), Finweek (Being at work doesn’t mean you’re present), and Destiny Man (The power of mindfulness).

That said, why is business in particular embracing this ‘soft therapy’, and why has there been such an accelerated uptake?

Psychologist and mindfulness trainer Linda Kantor teaches on the Graduate School of Business’ executive MBA programme at the University of Cape Town. She argues that the business world is dealing with issues of complexity, stress and a pace of life and work that is unprecedented. ‘Organisations are looking for new ways of coping and new ways of thinking,’ she says. ‘Funnily enough, the ancient tradition of meditation has much to offer.’

Companies are increasingly becoming interested in mindfulness, which is closely linked to meditation (the latter being one of the practices to enhance our capacity to be more mindful or ‘present’).

Another strong motivator for the speedy uptake is development in brain science – which has allowed for a deeper understanding of what is actually happening in the brain as we meditate. Being featured in the mainstream media has also been a boon to the cause, as has the fact that organisations have been singing the praises of mindfulness so loudly. Google even developed their own in-house mindfulness training, Search Inside Yourself, which is taught at the company and around the world.

According to Johannesburg-based psychologist and corporate wellness consultant Maureen Kark, the mainstream embrace of mindfulness is founded on the understanding that the practice is not restricted to, nor a reflection of, spirituality.

‘Mindfulness is about heightened awareness within the present moment – not escaping it. And most importantly, mindfulness practice can be learnt by anyone,’ says Kark. In her view, one of the biggest drivers behind mainstream uptake are corporates, as ‘studies have shown empirically that mindful employees are better engaged, less stressed and illustrate higher levels of sustainable performance in relation to their peers’.

Given the significant costs associated with employee ill-health, burnout and resignation, there’s an increased need for low-cost and easy-to-learn stress-management practices within the corporate space. Experts agree that mindfulness and meditation has proven to be a powerful technique for both stress reduction and improved resilience within fast-paced and digitised work environments.

So, we see that it works and it’s booming, but what is the science behind meditation? What we know from research is that it can reduce stress levels, enhance concentration and focus, and increase compassion. Science shows that meditation strengthens brain structures such as those involved in decision making, memory and emotional flexibility, and high-level information processing.

Those who meditated for about 40 minutes a day show thicker tissue in the left prefrontal cortex, which is the part of the brain responsible for cognitive and emotional processing and well-being.

There are uncountable studies supporting the benefits of meditation. A study in the Journal of Alternative and Complementary Medicine, showed that 40 out of 60 high blood pressure patients who started meditating could stop taking their blood pressure medication. Meanwhile, a study published in the Journal of Neuroscience last November found that people who engaged in mindfulness meditation showed a 44% reduction in emotional response to physical pain and a 27% decrease in pain intensity.

According to Kantor, people who meditate have a capacity to cultivate positive emotions, maintain emotional stability and engage in mindful behaviour.

If those are not the practical tools needed for a highly effective employee, then they make for a good starter pack. It seems humming, closed eyes and a benevolent smile are no longer the preserve of cross-legged yogis. 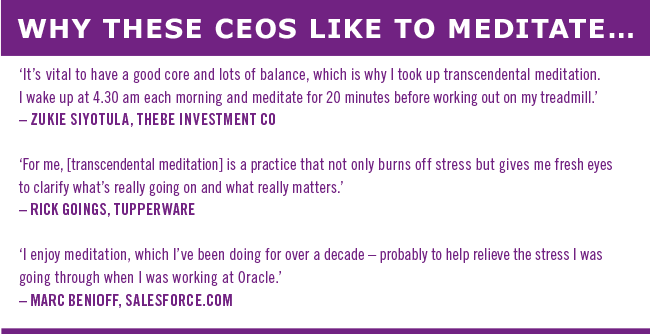