Over the past decade, growing numbers of corporate employees have been waking up on weekday mornings to a problem they didn’t have before: what to wear to work?

It used to be as simple as a suit, shirt and tie for men. For women, though, still vastly outnumbered by their male counterparts, the rules were less specific (knee-length, tailored, must have sleeves). But that was in the good old days before even finance companies started sending out internal memos about ‘a firm-wide flexible dress code’ and ambiguous concepts such as ‘business casual’.

As of March this year even the suits at conservative investment bank Goldman Sachs don’t actually have to wear suits, and Investec South Africa announced in June that it was introducing a ‘dress-for-your-day’ policy. This allows its employees to decide what’s suitable attire for the day ahead.

So who can we blame? Millennials? We’ve already blamed them for just about everything else. Mark Zuckerberg, with his eternal jeans and grey T-shirt, as though every day is Casual Friday at Facebook HQ? Well, maybe.

The truth, according to workplace culture consultant HV MacArthur writing on Forbes.com, is that flexible dress codes are part of a bigger cultural shift in the employer-employee relationship that emphasises employee empowerment, and scrapping dress codes is just one way in which employers can display trust and reward their employees’ judgement. ‘A big push is from the war for talent,’ she writes.

The pressure to compete for talent with Google, Facebook and other progressive Silicon Valley companies is the reason Goldman Sachs ditched the corporate tie for its tech division two years before rolling it out to the rest of the company. But also, the work itself has become more complex and nuanced, requiring people to navigate grey-area decision-making. ‘At this critical juncture of trust and empowerment, managers have to support staff in a way that is less command-and-control and more collaborative, and employees must start to take risks and trust their own judgement,’ says MacArthur.

Empowered decision-making and strategic risk-taking are key skills in the modern workplace, MacArthur adds, and trusting your staff to make good decisions about what to wear to work seems a small step in the right direction.

The link between performance and employee empowerment is exactly what underpins Investec’s new dress policy, says Lesley-Anne Gatter, the company’s head of HR. ‘We believe that high levels of trust and autonomy propel performance forward. Our new dress philosophy is all about this: trust, empowerment and freedom. It is aimed at autonomy – engendering an adult mindset in the organisation, where the organisation is no longer some kind of parental force but rather we employ adults who make good decisions for themselves and the organisation. It’s a contract.’

Scrutiny of policies that undermine especially female autonomy at work, a response to the #MeToo movement, recently led to Virgin Atlantic dropping directives that made wearing make-up compulsory for flight attendants and ruled out pants, except by special request. Yes, in 2019.

Could the dress code rethink have anything to do with traditional dress codes discriminating against female employees? Perhaps, says Gatter. ‘The diversity and inclusion factors have been an exceptional outcome of the new policy. Moving away from a very prescriptive approach will have many benefits in terms of belonging.’ 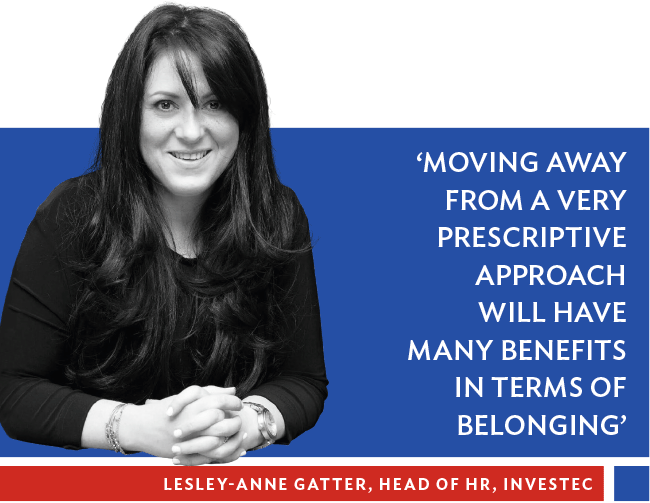 Dressing workers in uniform has traditionally been touted as a strategy for promoting team spirit and a sense of belonging, but Gatter’s comment hints at a radically new interpretation of workplace ‘belonging’ that prioritises diversity and individuality over uniformity – qualities that are especially valuable for finance firms trying to position themselves as innovation hubs at the forefront of financial technology. And don’t underestimate the role played by Casual Friday, a custom that originated in the tech industry in the 1990s, with Hewlett-Packard claiming the honours.

At HP in the early ’90s, Casual Friday wasn’t just about ditching your tie for work: it was also a day set aside for non-routine tasks that promoted creative and innovative thinking. It would soon become common wisdom that no business could thrive without creativity and innovation – and not only on Fridays.

Jason Lauritsen is a workplace culture expert and former corporate HR executive who, as head researcher for a study commissioned by employee engagement software company Quantum Workplace, has studied the employee experience at thousands of companies. His conclusion: if you care about engaging and retaining staff, you should take a hard look at your dress code. And by taking a hard look, Lauritsen means that unless it is ‘driven by a specific business need or safety issue’, you should scale it back or ditch it.

‘As humans we are driven by a need to express our individuality, starting in adolescence,’ he writes on workplace insights newsletter Spark. ‘How we dress and adorn ourselves is an important expression of that individuality. As a result, the dress code can feel as if it strips us of our individuality.’ The negative impact of a prescriptive dress code goes well beyond restricting your employee’s freedom of expression, says Lauritsen. It also sends a message of distrust.

To send a positive and empowering message to employees, Lauritsen recommends guidelines such as dressing for comfort and confidence, or ‘dress for your day’, the policy embraced by Investec. Dress codes aren’t dismantled in a day. At Investec, says Gatter, ‘we observed different parts of the group making alterations to the dress code, an informal relaxing of the policy. We also observed a business that we acquired a couple of years ago and how it was far more relaxed – and how the people valued this’.

Once the company was ready to roll out the new policy, they signalled their commitment to trust and employee autonomy by simultaneously announcing a flexible leave policy that no longer limits staff to a set number of leave days and which seems far more radical than being able to swap your suit for chinos on days when you don’t have any meetings scheduled with clients.

The dress-for-your-day policy is based on an assumption about general consensus regarding appropriate office wear – so how will Gatter’s department correct employees who operate outside of the consensus? There are high-level guidelines to what’s in and what’s not, she says. ‘Our brand is sophisticated, professional and depicts our particular position in the market. Staff need to align themselves accordingly.’ If employees act outside of the guidelines, her team will ‘simply engage in dialogue to correct’.

This may be cold comfort for the corporate employee who has woken up to questions concerning their wardrobe. What exactly does ‘business casual’ mean? Is it more casual than informal, or less formal than smart casual? Does it include chinos and polo shirts but exclude jeans, T-shirts and sneakers? Will wearing a suit signal rebellion? What has the world come to?

On Forbes.com, Eustacia Huen argues for a more nuanced understanding of ‘business casual’. The exact interpretation varies from industry to industry, so take your cue from your office culture, she says, and bear in mind that ‘role and experience matter’. If the CEO wears sneakers to the office, it doesn’t necessarily follow that you can turn up for work in your Reeboks. ‘Logically speaking, the less experience you have, the more formal your attire should be.’

Finally, take courage from the fact that the chief reason for relaxing the dress code was to enable you to make your own choices about what you wear to work. There’s nothing wrong with being a smart person in a business-casual world.