I once was employed by a French company and, when visiting their offices in Paris, was surprised and delighted to see how many employees regularly took their dogs into work. I could see how it made for a happy and relaxed office environment, though I also wondered at the wisdom of it, when the CEO’s aged labrador snored and snorted through a rather tense meeting…

Dog-mad Parisians may be among the world’s most innovative thinking when it comes to allowing pets to accompany their owners to the office, but they are not alone. Globally, some of the most forward-looking companies in the sphere of corporate wellness and benefits are allowing this more and more. And that’s before you get to the greenery.

While many companies are opting for hot desks – and actively discouraging any kind of personalisation of workspace – ‘green offices’ have been shown to boost productivity and well-being.

Whether it’s a blooming African violet on a desk or Fido under it, allowing staff to express their individuality gets a resounding thumbs-up from corporate wellness experts and employees alike.

It is supported by research such as this: in 2014, a study at the University of Queensland in Australia reportedly found that offices decorated with plants could boost employee productivity by as much as 15%. The study’s co-author and psychology professor Alex Haslam told Entrepreneur.com that office landscaping not only helped a workplace become more comfortable but also had a positive impact on the bottom line.

Employees who engaged with their surroundings were generally better workers, according to the research. ‘A green office communicates to employees that their employer cares about them and their welfare,’ he said.

The study, apparently the first to examine the effects of a ‘green’ office, focused on several offices in the UK and the Netherlands. Offices were greened, and air quality, concentration and workplace satisfaction were monitored. But it goes further than this. Offices without photographs or personal knick-knacks are ‘the most toxic space’ you can put a human into, says another of the study’s co-authors Chris Knight, according to the Guardian.

This is further substantiated in an article by Meredith Wells-Lepley, a senior research associate at the UK’s Institute for Workplace Innovation. She found that personalising your space at the office had numerous benefits. These included helping people express their individuality; marking their territory; fostering an emotional connection or a bond to the new environment; and helping them cope with stress by relaxing or inspiring them.

Steve Peralta, a Johannesburg-based corporate wellness practitioner, believes every office should include foliage plants in their space. ‘Besides the resulting improvement in air quality, the presence of plants can help improve one’s state of being,’ he says. Peralta believes the modern disconnection from nature negatively impacts our body and mind, and that ‘minimising this disconnection as much as possible is important’. That said, what about the living, breathing office props? 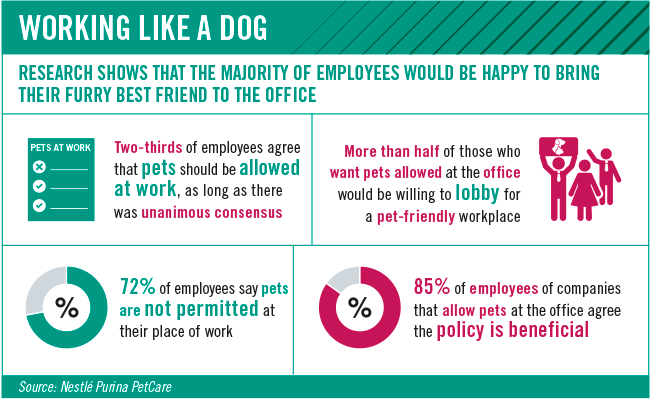 Several studies have shown that employees who bring pets to work experience fewer signs of stress. Besides a mood boost, there are also direct physiological benefits to allowing your furry friend to come to work with you.

‘Having your pet around and being able to interact with it will help to release feel-good chemicals such as oxytocin, and reduce the amount of stress hormones such as cortisol,’ says Peralta. This, he adds, will help to down-regulate the sympathetic nervous system and our-fight-or-flight response. In so doing, symptoms of over-activation such as high blood pressure, emotional distress and general strain will be reduced. ‘You’ll start to feel and think better as a result, which would typically have a positive impact on your effectiveness and productivity.’

When it comes to pets, however, the jury is still out. While corporate wellness experts agree that although it has enormous benefits, it can be difficult to implement and manage.

How, for example, do you stop an aggressive fox terrier from lunging at accountant Fred’s dozing feline, or muzzle your foul-mouthed parrot as he begins to chirp insults at the boss? The line has to be drawn somewhere.

Some companies are also more equal than others when it comes to flexibility in this regard.

An online search of ‘take pets to work’ will inevitably result in Silicon Valley star Google popping up. It makes sense, of course – a pet-friendly office goes hand in hand with the company’s other dizzying offers, which include free meals, on-site créches and a climbing wall, among the company’s many benefits. Its official code of conduct page even features a brief dog policy that goes further than simply letting employees bring their dogs to the office. It asks that employees clean up after their dogs and are aware of co-workers who may suffer from allergies.

Google also makes no bones about the fact the company favours dogs over cats. Business Insider reports that Google – on its investor-relations site – gave cats the thumbs down. It had this to say: ‘Google’s affection for our canine friends is an integral facet of our corporate culture. We like cats but we’re a dog company, so as a general rule we feel cats visiting our offices would be fairly stressed out.’

Amazon is also reportedly a dog-friendly workspace, with between two and three dozen dogs making themselves at home on an average day at its headquarters in Seattle.

Amazon insists, however, that staff first register the hound as a ‘workplace dog’, ensure it’s had its vaccinations, and that it must remain on a leash unless it’s behind a closed door.

In a recent article, CNBC reported that millennials were quite likely to surpass baby boomers as the largest pet-owning generation. It follows then that companies are wanting to lure young employees by allowing them to bring their pets to work.

Environmental and well-being website Mother Nature Network lists the top 10 pet-friendly companies to work for in the US. In addition to Google and Amazon, these include Procter & Gamble’s pet-care division, Ben & Jerry’s, Klutz and Autodesk. 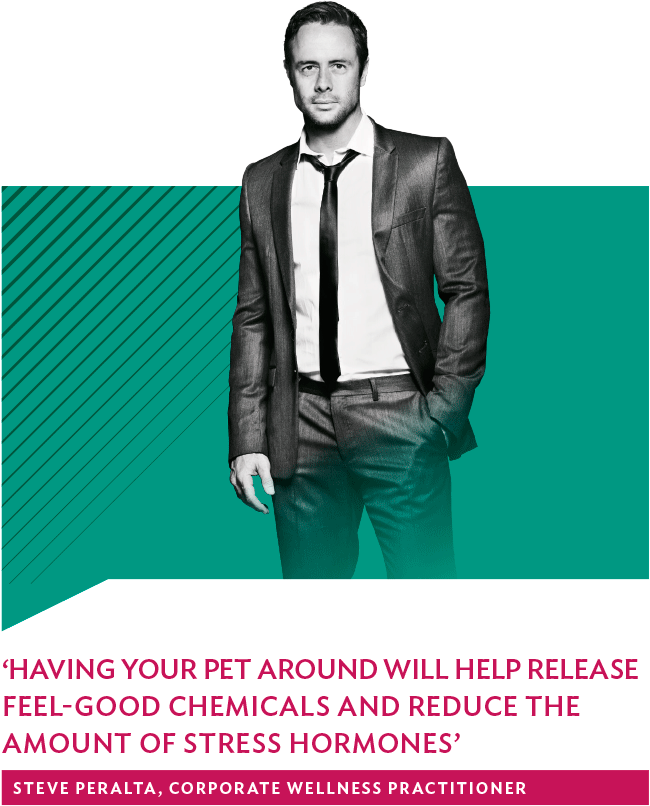 South Africans may love their pets but they are lagging in this regard. Nestlé Purina PetCare, ad agency Jupiter Drawing Room, digital marketing agency Isobar and the health NGO Section27 are some of the handful of organisations that have allowed this, even if not formalised.

Steven Mewissen, owner of Cape Town-based digital marketing agency GSDH – is full of praise for the idea. ‘I like to have my dog around me,’ he says. ‘Animals create a more positive environment. They encourage staff to move physically as they are forced to take their pet for a walk. This results in increased productivity because people get some movement and feel happy.’

Mewissen also believes the connection between animals and humans can create a positive atmosphere. ‘Having a connection is important and animals often make people feel happy. A house is not a home without a dog. That same vibe is transferred into the office, creating a sense of openness and approachability,’ he says.

He encourages his staff to bring their pets as it makes both parties happier. ‘The pet isn’t alone, the owner isn’t worried. It’s win-win.’

Anso Thom, communications head at Section27, is also a fan. ‘It is better than any remedy when it comes to stress relief. It makes you laugh, makes you happy. It also reminds you that there’s more to life than work, work and work. It also forces you to dish out lots of cuddles!’ she says.

Magdie van Heerden, human-animal interaction practitioner and veterinary social worker, cautions however, that taking your dog to the office is not a game, and that there are pros and cons to the practice. Many factors play a role, she says. These include the age of your dog; whether the work environment is dog-friendly (space, indoors as well as outdoors); if your dog is trained (with positive reinforcement techniques only); and if your dog has been well socialised from a very early age (before four months) with many different humans, other dogs and unfamiliar places.

Most importantly, says Van Heerden, the welfare of the dog must not be negatively impinged upon. She goes as far as it calling it unethical if your dog does not benefit equally from the arrangement.

It can also be disruptive, she cautions. ‘This is why organisational culture and climate plays such an important role. It is not only about the employees’ productivity, but the animals’ welfare as well.’

It is also imperative that the programme is well researched, planned and executed. There must be a specific organisational policy in place, and an animal welfare or behaviour specialist involved in the planning.

And if Rover happens to be a snuffly old labrador, then board meetings are perhaps best avoided.