The rand may still be in the salt mines but SA’s appetite for large vehicles remains as strong as ever. Witness the recent launch of the eighth-generation Toyota Hilux and third-generation Fortuner. Without the Japanese icon’s presence in the line-up, the 10% drop in car sales for May would have been considerably worse. The message is clear. Consumers are finding safe harbour in trusted brands and products that will hold their value.

Toyota Fortuner
Reclaiming top spot is Toyota, fielding their star athlete, the new Fortuner, based partially on the latest Hilux but with a more sophisticated chassis. While Hilux must do service in those selfsame salt mines (and Northern Cape ore fields), Fortuner can afford a greater degree of sophistication – most notably a multi-link rear suspension instead of a solid axle that helps mitigate against Hilux’s crashy, unladen ride.

For the rest, it is all-new, both visually and, more substantially, inside and under the bonnet. Much of the interior and engineering migrates from Hilux, with the free-revving new 2.4l and 2.8l diesel engines doing service in both. Previous Fortuner owners loved their no-nonsense SUVs, and the good news is that this ethos has been retained, albeit under a cloak of surprising sophistication. It’s still tough but no longer looks agricultural.

Step inside and the Lexus-inspired cockpit is smart and fresh, with Toyota’s infotainment screen better integrated into the central dashboard than its cousin Hilux. There’s an entirely new, easy-to-grip, compact steering wheel – less barge-like, more sedan-orientated – and the multiple digital displays are best-practice contemporary, reviewing fuel usage, connectivity, 4×4 functionality and the status of safety aids, of which there are many. The seats are superb, good to look at and supportive.

Space, too, has been better utilised with both passenger and luggage areas bigger than previously. But it is on the road that the Fortuner really lays down the gauntlet – the combination of new engines, a more dynamic chassis and an increased sense of connectedness to the driving experience means that distances are covered with consummate ease.

If old Fortuner was the go-to holiday car, new Fortuner adds sophisticated cross-country cruiser to its arsenal of attributes. It’s very quiet, responsive, excellent through the passes and economical to boot. The kudos that has accrued to the new Hilux in its short time will likely feed through to Fortuner as well. Toyota must be pleased – it’s a properly impressive challenger. 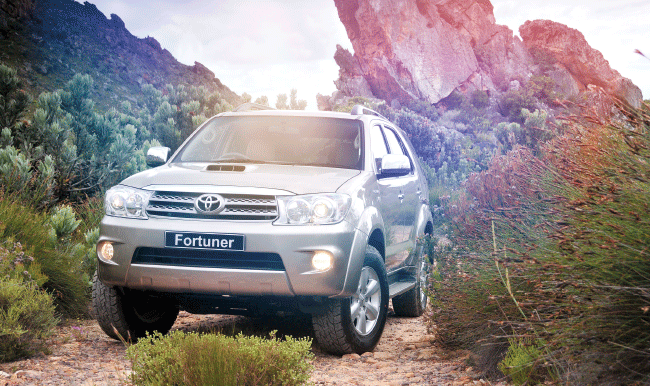 Mercedes-Benz GLS
There is a dearth of true seven-seater SUVs in SA – cars that can accommodate a brace of adults. The GLS ‘S-Class of SUVs’, as Mercedes-Benz likes to call their newly monikered GL, fits the bill. At 1.8m tall and 5.1m long, it’s as much real estate as people mover – an appropriate flagship for Mercedes’ recent SUV onslaught (GLA, GLC, GLC Coupé, GLE and GLE Coupé). It headlines their broader product offensive that’ll see the number of Mercedes passenger car models grow from 29 to 42 by 2020.

As before, the GLS specialises in luxurious space – three rows featuring seven seats that Mercedes insist will accommodate real adults in every seat and still swallow plenty of luggage. That’s almost true, but the age-old problem persists – seven adults generate far more than the 680 litres Daimler offers (in two-row format). Good news then that the GLS has a substantial 3 500 kg towing capacity. Inside it’s a little dark, the glazing on the new model less substantial than the outgoing model, and the generic Mercedes interior is a mite dull, a common issue across various brands these days as best practice takes the place of innovation and individuality.

Most owners will option the air suspension rather than the steel set-up, and generally speaking that’s a good idea. It will keep ride height constant when towing, aid trailer sway and allow for various drive modes to be dialled in (sport, comfort, slippery and off road).

The downside is a slightly irritating, low-speed ‘secondary ride’ harshness, common in many air suspension set-ups – corrugations and minor bumps catch the intelligent system out and send small tremors through the cabin. On the open road, though, it is a superb tourer, a good balance struck between dynamic handling and comfort. And off road, as long as you choose the optional off-road+ package, it’s seriously capable.

There’s a low-range gearbox, centre differential lock and added functions of the Airmatic air suspension, which will raise the ride height to 306 mm, giving a fording depth of up to 600 mm (the same as the legendary G-Class).

Finally, then, GLS is a true crossover – an entirely competent 4×4 as well as an executive express. Choose the 350d and it will also be an economical family carrier, as useful as it is aspirational. 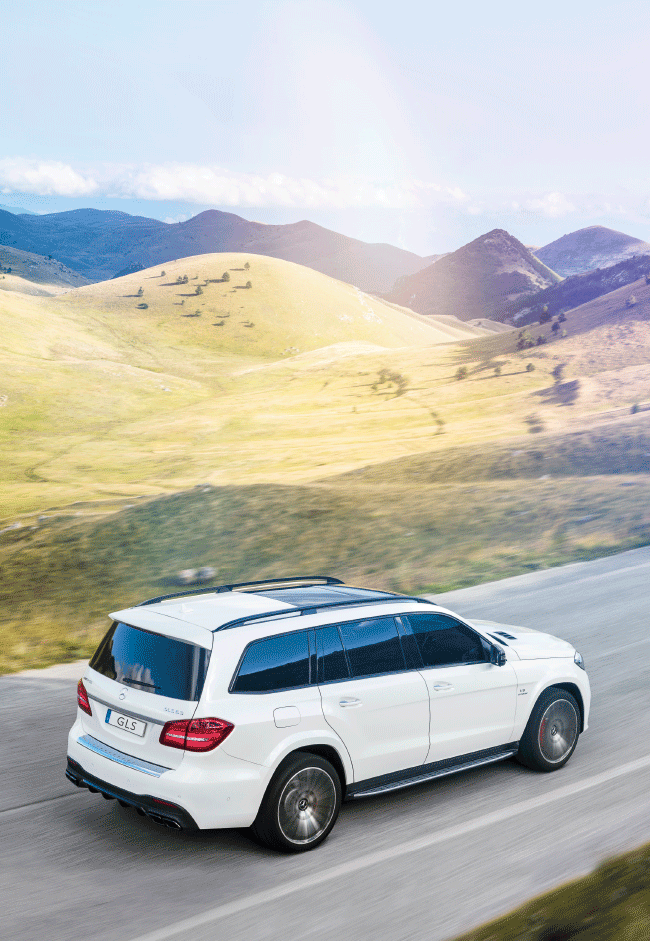 BMW X5 xDrive40e
Munich’s latest hybrid represents the next step on its path towards a more sustainable future – for the company as much as the world. The point of difference for this X5 is a full electric-drive mode. Switch the eDrive button on the central console to max eDrive and the car operates exclusively on electric power, taking capacity from the large lithium-ion battery with no intervention from the 2l turbo-charged petrol engine.

The range of this battery is hardly groundbreaking (just 31 km), but the full electric mode is significant. The car can charge its own battery on the move, so the 31 km range is renewable on the fly. This makes it useful in combination city/highway driving when charge created on fast roads can be used in stop/start traffic. BMW claims 3.1l/100 km fuel usage for this X5, which is frankly disingenuous. The moment the petrol engine is called upon, the figures will reflect typical 2l turbo returns, closer to 10l/100 km. Still, it is a step in the right direction, placing the onus squarely on the owner to get the most out of the car.

As well as self-regenerating, the battery can be charged by means of a plug located above the front wheel. Attach a cable to either a BMW public charger, BMW wallbox charger or a conventional wall socket and charging will take 28 minutes, three hours or overnight respectively. The Wallbox costs a cool R25 000 extra (installation included) or you can go the whole hog and buy a solar carport to go with it, which will charge the house system as well as the car. For the rest, the X5 is the same spacious SUV it has always been. The smaller engine and extra weight blunts the performance but a 0–100 km/h time of 6.8 seconds will be acceptable for most eco-minded folk. The rear cargo space is reduced to accommodate the battery, down from 650l to 500l.

The $64 000 question is, will environmentally responsible BMW drivers choose this hybrid over the capable – and far cheaper – 2l diesel? Only time will tell. 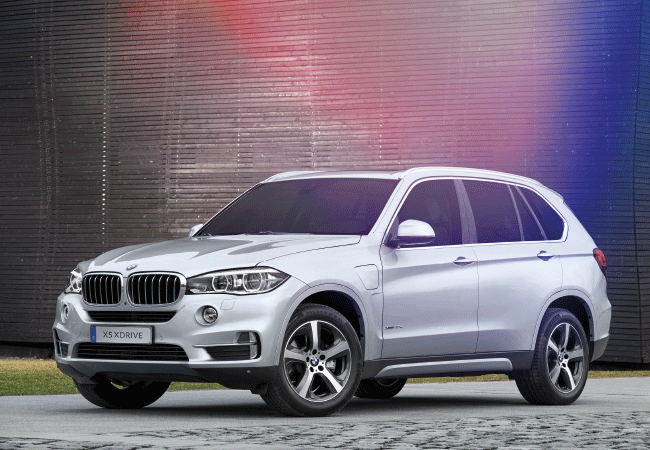 Volvo XC90 PHEV
Another hybrid, another European, another turbocharged 2l petrol engine hiding behind a powerful electric motor. It seems this is the current way of the hybrid.

The conventional XC90 has been a global hit, the first of Volvo’s one-engine-fits-all cars sporting the 2l turbocharged mill. Its combination of beautiful design, careful ergonomics, useful square size and acceptable locomotion has found many takers. In the hybrid, Volvo has added a 9.2 kWh lithium-ion battery pack that feeds a 65 kW/240 Nm electric motor, which drives the rear wheels, while the petrol engine drives the front. Bingo… On-demand all-wheel-drive.

Like the BMW X5, there’s an all-electric mode called Pure, a part electric/part engine called Hybrid and a Power mode for hooligan antics. Volvo beats BMW’s 31 km electric range, suggesting 43 km of emissions-free motoring is possible in Pure mode, although this is highly dependent on the driving style of the owner.

Another advantage over the BMW is the cargo space – the battery is better situated, meaning minimal intrusion, and there is more space in the big Swede. It’s also far trendier – a masterclass in contemporary design, both inside and out. A multifunction steering wheel, crystal gear level, huge, portrait touchscreen with swipe and pinch function, exceptionally comfortable seats, LED active headlight cluster and vast panoramic sunroof all add interest. The steering assistance for parallel and perpendicular parking, auto braking at intersections and imminent frontal collisions, pedestrian and cyclist detection, lane-departure warning and road-sign information make it as bang up-to-date technically as possible.

In terms of power, the XC90 delivers a serene, dynamically capable drive, perhaps a little too dynamic; the low-speed ride is harsh, bordering on uncomfortable. Bad roads are a trial, but smooth highway driving is the opposite. Noise, vibration and rattle suppression is exceptional, and there will be few complaints from the urban executive expecting a luxury status symbol as much as a capable SUV.

Ford Everest
There can be no doubt of the strides Ford has taken in recent years to improve its global product across the range. Locally, Ranger stole the limelight from Hilux for two years before losing it recently to the newly rejuvenated Toyota. And, in a much anticipated move, it released the 3.2l diesel-powered Everest – wholly new, as different to the previous model as Bach to Blur: sophisticated, elegant and, crucially, aspirational. It has been on the market long enough now to assess its quality, ability and effect. It scores decently on the first two counts, receiving high praise from owners who highlight the ruggedness, excellent ride and cabin quality.

Its drawback is its pricing – lovers of the blue oval baulk at paying the nearly R700 000 expected for Everest. This ultimately has reduced its effect on the market – the step up from tractor to trail blazer, with all the safety aids and trick chassis that entails, has pushed the price beyond customer expectations. On features and ability, it is a legitimate competitor to the much more expensive Jeep Grand Cherokee, but it is a perception problem – one that Ford will have to work hard to change.

The state of the SUV market is healthy indeed, and as they move towards new technologies that improve fuel consumption, the public attitude to them will soften further. As symbols of solidity in a fugitive age of impermanence, they are finding new markets. The fight for market share is on.