Chances are, for you or people you know, it’s considered business-as-usual to receive messages or requests from your boss after hours. Whether it’s the expectation to be ‘on email’ even during annual leave, being added to client WhatsApp groups that ping into the evening hours, phone calls during dinner or email missives at midnight, the encroachment of our jobs – or, more specifically, clients and employers – into our much-needed downtime hit a massive upswing during the pandemic, as remote working put the office at our fingertips 24/7 and companies went into survival mode, justifying all manner of boundary breaches.

Many in SA may not even be aware that, in Europe, several countries – France, Italy, Spain and Ireland – consider what’s been dubbed ‘the right to disconnect’ an emerging human right worthy of legal protection. Employers in these countries can be penalised for contacting their employees after hours, helping to modify professional behaviour in workers’ favour and reducing the casualties of burnout, another ‘pandemic’ wreaking havoc on the economy.

Although the global economic burden of burnout has not been calculated, according to the WEF the global cost of mental illness will grow to an estimated $16 trillion by 2030, in part, owing to the increase in burnout.

Maintaining a balance and strengthening boundaries between work and not-work is often framed as a challenge remote workers can solve for themselves. But what if it’s your boss who is disrupting your balance? 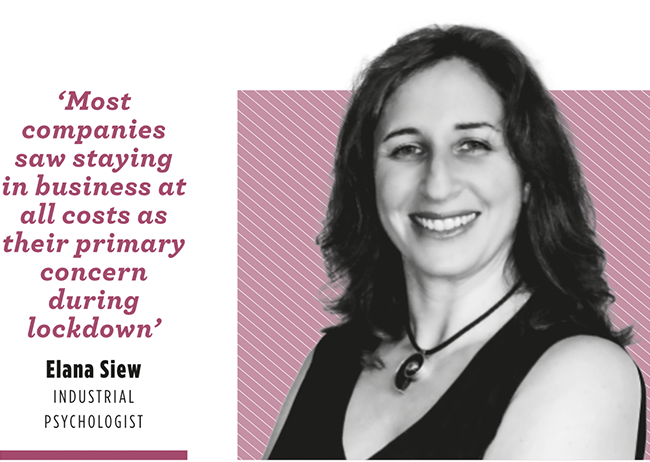 In November 2021, Portugal joined the list of European countries that have passed laws to prevent employers contacting employees via text message, phone or email once they are off the clock. ‘For us, this is as an essential move to strengthen the boundaries needed for a good work-life balance,’ writes Ana Catarina Mendes, parliamentary leader of the Portuguese Socialist Party, in the Guardian.

She compares the encroachment of digital communication into our lives, particularly in the working world, with the impact of long-working hours on labourers in the initial Industrial Revolution. ‘The ongoing digital transition made the need to legislate remote working necessary,’ says Mendes. ‘The pandemic has made it urgent. We conceived this new legislation before the pandemic began, but it has become even more necessary now: to respond to the perverse, undesirable effects of the rapid expansion of teleworking. The necessity of all kinds of digital software means surveillance of workers has also grown very rapidly. […] This is why we have prohibited employers from contacting workers outside working hours and imposed potential fines for breaking the rules.’

While there are many studies that reflect the deleterious effects of not being able to ‘switch off’ from work after hours, both on employees’ health and companies’ profits, there are only a handful that specifically address employer intrusion after hours, mainly in the US.

Online invoicing company Skynova recently conducted a survey of 1 000 employed Americans, in which nearly 70% of workers reported their employer contacts them outside of normal work hours at least once a week – and six out of 10 believed it should be illegal for employers to contact them outside of working hours.

A 2017 survey of 150 supervisors by executive outplacement firm Challenger, Gray & Christmas found that more than 80% of respondents said they would reach out to their employees after hours, with 28.6% of those expecting a response within a few hours. Nearly 49% said that while they would reach out after hours, they wouldn’t expect a response until the next workday. Just 17% of respondents said they would hold off on contacting an employee until the next workday.

‘Even though almost half of respondents said they wouldn’t expect a response until the next workday, most employees feel the need to answer their bosses in a timely manner, worrying about it until the issue is handled,’ says Andrew Challenger, VP of Challenger, Gray & Christmas. ‘This constant pressure not only negatively impacts morale, but also likely results in sub par work, as workers feel they are constantly on call, with no real downtime.’

SA’s white-collar workers – remote or not – are just as afflicted by blurred work-life boundaries, though no research exists that specifically addresses employers’ overstepping their bounds. 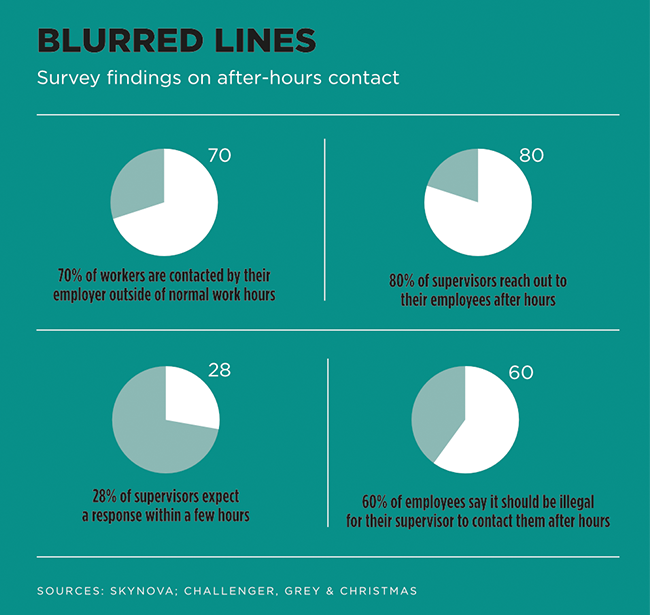 ‘Most companies saw staying in business at all costs as their primary concern during lockdown,’ says industrial psychologist Elana Siew. ‘We all knew there would be collateral damage resulting from the shift in working spaces and methodologies. However, keeping a company afloat and people employed trumped respecting employees’ rights. Most employees also adapted and coped in their own ways without considering their own rights. Even though many companies report productivity to have increased over the past 18 months, the increase in stress levels and decrease in staff satisfaction cannot justify businesses not addressing mental health issues.’

While SA hasn’t officially adopted the ‘right to disconnect’, the Basic Conditions of Employment Act affords some protection to workers earning below a particular wage threshold. According to the South African Labour Guide, those earning up to R205 433.30 annually are entitled to demand ‘payment for overtime worked at the rate of 1.5 times the normal wage rate’. They are also entitled to refuse to work ‘more than 45 hours per week normal time’, ‘10 hours per week overtime’ and ‘more than 12 hours per day’. The thinking is that those who earn below this threshold have less bargaining power with their employers, leaving them vulnerable to abuse, hence the need for legal recourse. The act could theoretically apply to refusing to respond to employer contact after hours, or demanding overtime pay in the event that it occurs. Those earning above the threshold, have no such recourse.

That said, does SA even need a ‘right to disconnect’ law, and would it benefit us? No, says industrial psychologist Ann Werner. ‘It’s not a good idea at all, in the format presented, in that the South African environment is so unaligned to the thinking that created the European laws. It’s like trying to breed huskies in the Kalahari. The rules and laws don’t fit because of our particular and unique socio-economic-political milieu.

‘Unemployment rates in Spain at the end of 2021 were at 13%, while Italy showed a 10% rating and France had a mere 8% who were unemployed. As at the end of 2021, South African statistics revealed a 35% unemployment rate, which is predicted to increase. So it could be that the European laws have been introduced to retain their workforce and to improve the work-life balance of their employees. The attitude of employers in South Africa – from my practice perspective – is that if you do not wish to work the hours expected of you, there is always someone else who can fill your shoes. And so employees are most often forced to work these sorts of hours. This is prevalent in white collar jobs, but the abuse is higher in unskilled labour where the supply completely outweighs the demand.’

It seems the right to disconnect treads the line between supply and demand, and is far more likely to benefit employees in developed countries with low unemployment rates.

Just as an increase in minimum wage – while sounding like a good idea – can actually result in a loss of entry-level jobs in countries where unemployment is high, so too could a blanket ‘right to disconnect’ law affect companies fighting for survival, general employment and employees’ right to choose when and how they work. In addition, the law does not take into account the increasingly globalised nature of work, which traverses time zones.

‘We need to shift our thinking,’ says Siew. ‘We need to understand that long hours don’t equate to success.’