Despite fallout from the Ukrainian conflagration – R5 000 to fill a large fuel tank?!? – the South African love affair with people carriers endures. It’s a universal infatuation in fact: fully 50% of all vehicles sold by 2023 will be SUVs, up from just 27.7% in 2017. The reason for the phenomenal SUV success is simple enough – they offer more space, greater perceived value and improved safety than conventional sedans or hatchbacks.

Lexus has had a stellar year to date; like its mother company Toyota, the hybrid gamble has paid off. On the back of successes with the ES, UX, IS and RX, the new NX has had a strong launch, emphasising the hybrid drive-trains. The mid-sized SUV has new powertrains, new connectivity, improved active and passive safety as well as a raft of convenience technologies. But really all the talk has been about the new design, which now sets the standard for edgy SUV street cred. That title was held by its sister, the larger RX, about which much was written, the huge spindle grille dividing opinion. That, of course, was before BMW muttered ‘hold my beer’ and unloaded the 4-Series snout on the world. NX is an altogether less radical attempt at attention seeking. The origami folds are still there, but there’s better integration of flow and balance, especially around the nose and at the back. Under the bonnet, choose from either the 152 kW, 243 Nm 2.5-litre normally aspirated EX or the 205 kW, 430 Nm turbo-charged 2.4-litre F Sport. The hybrid army is available across the range – in EX, SE as well as F Sport grades. If the success of the Corolla Cross Hybrid is any indication (50% of Cross models sold are hybrid), they should all be popular.

With the spotlight firmly on NX, there’s been less brouhaha around the leviathan LX, which launched quietly, along with Lexus’ super-limo, the LS. Both are niche vehicles. The LX has a dedicated overlander following and the LS is the under-the-radar choice for over-achievers who choose (engineering) content over style.

If Lexus is Japanese royalty, Kia and Hyundai are the determined Eastern interlopers. Continuing their climb through the social strata ever upwards, the Korean twins surprised the local market late last year with decidedly American offerings, unambiguous declarations of intent, no question. Three models lead the upwardly mobile charge. The appropriately colossal Hyundai Palisade SUV is the flagship, a seven- or eight-seater to compete in the space occupied by the BMW X5, Audi A7 and Mercedes GLE competitors. But while the design, style and even build quality may be a match for the Germans, Palisade’s 147 kW/ 440 Nm 2.2-litre diesel unit isn’t entirely up to power standards set by the Euro-elite. Overseas markets have larger, more powerful engine options, but for SA the choice is any size as long as it’s 2.2. That means less spirited overtaking compared to the competition and less relaxed inter-city loping. Still, get past the uninspiring performance figures and the rest stacks up well. The conventional, coil-based suspension is beautifully absorbent, the 2-2-3 seven-seater seating configuration is a marvel of packaging and the air of luxury is more than just a clever illusion. Hyundai makes exceptionally good cars these days and inside, Palisade is the best of them. Twin manufacturer Kia, not to be outdone, is finding success with its larger-than-ever new Carnival and Sorento models. Sorento is a full-size SUV, and Carnival – which replaces the popular Grand Sedona – is an MPV rather than an SUV, meaning it still hefts large numbers of people around, but foregoes the dirt-road ability. No matter. The packaging of both giants is worthy of a look if large and flamboyant is on the menu. Inside the Carnival, the set-up is similar to the Palisade (that ingenious 2-2-3 configuration) and the materials are on par. But where the Hyundai is ever so slightly middle class, the Carnival aims for a rarer atmosphere. Its touch points, finishes and elegant flourishes, such as those impossibly dernier cri Bauhaus seat-heating controls, suggest it plays to a highly fashion-conscious audience. Yes, the engine is that standard 2.2-litre Korean lugger, but the style, elan (and sorted cruising manners) make up for any lack in the pants. Sorento, by comparison, is the dirt-road all-wheel-drive cousin on offer to keep things stable on the gravel. The sense of grandeur (and oodles of space) is the same, just dressed in Wellingtons, ready for adventure as well as the school run.

Over in Germany things are getting interesting. BMW’s electric dreams are now reality, the iX and iX3 testament to Bavaria’s aim to lead in the new era. iX has had a particularly high-profile launch in SA, as much for the gigantic grille as the powertrain. That’s unfortunate – as arresting as the face is, the iX’s real talking point is its speed. It ranks as one of the world’s quickest electric vehicles, giving the Porsche Taycan a run for its money. Given that it is a full-sized SUV, that’s no mean feat. Try a 0–100 km/h time of 4.6 seconds. Inside is equally interesting. That traditional (read bland) BMW interior is gone, in its place a futuristic amalgam of enormous screens, minimalist switchgear and deft touches, such as the USB-C charging points engineered into the sides of the seats. 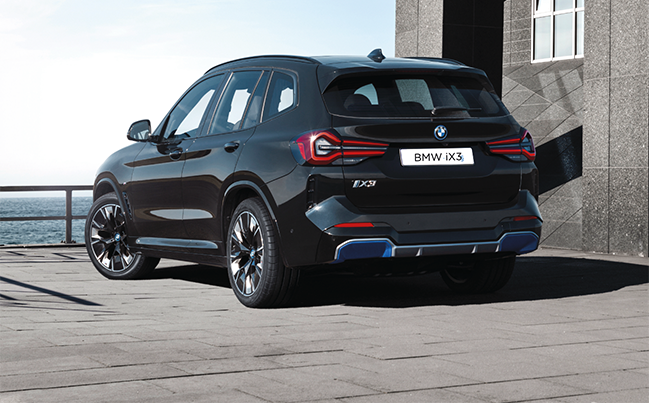 Elements of that new interior follow through to the new iX3, expected soon, BMW’s full electric version of the best-selling X3. There have been updates all round, tweaks to the exterior and infotainment as well as that powertrain. BMW claims its battery pack range is 430 km, driven sensibly. The proof will be in the driving, as with all electric vehicles.

Meanwhile at Stuttgart, Ingolstadt and Zuffenhausen, the electric SUV onslaught continues, with EQS headlining for Mercedes-Benz, the e-tron family representing Audi and the Taycan Cross doing fine work for Porsche. All have had good receptions and both Audi and Mercedes have electric roll-outs that include a raft of upcoming SUVs. Porsche too will reveal its electric Cayenne Turbo GT, which, given the popularity of the Cayenne generally, should do well in SA, bringing electric motoring to the Porsche faithful who need the functionality of a full-sized SUV.

We’re still waiting for the extended Mercedes’ EQ family, which will include SUV versions of the popular GLE and GLA; expect EQE and EQA soon. There’s also an updated GLC in the offing – with conventional engines – adding new C-Class electronics and digital ability to the hugely popular mid-sized SUV. There are minor body changes and a new nine-speed automatic gearbox.

Over in Italy there’s much activity. Alfa Romeo, seemingly reinvigorated by the cash injection offered by mothership Stellantis, has launched the Tonale, a mid-sized SUV aimed squarely at the Audi Q3, BMW X1, Mercedes-Benz GLA and Volvo XC40 market. It is, in essence, a reconfigured Jeep Compass, the mid-range SUV platform shared across the mother company. That’s no bad thing – it’s strong and adaptable. Here it supports a beautiful, wholly Italian work of art, utterly Alfa in the design detailing and interior craftsmanship. Under the bonnet will be a 1.5-litre, 4-cylinder turbo in combination with a 48V (15 kW/55 Nm) electric motor. If that sounds underwhelming, patience; there will be a beefier 2-litre version eventually, as well as a sporty Quadrifoglio some way down the line. Alfa’s other SUV, the larger Stelvio, gets a mid-life nip and tuck this year too. Expect a new interior as well as a hybrid option.

Alfa isn’t the only Italian brand playing in the SUV sandpit. Highly anticipated is the Maserati Grecale and Ferrari’s appallingly named Purosangue. Both marques are latecomers to the SUV game and only broke with tradition (sports cars only) when Lamborghini’s Urus, Bentley’s Bentayga and Aston Martin’s DBX showed there was a lucrative market for premium grade sports SUVs. That said, Grecale is smaller – Alfa Stelvio sized – and shares engines and major components with its first cousin. Interior detailing is rich and luxurious, as is Maserati’s wont, setting it apart from the Stelvio, which instead accents Alfa’s racing heritage. To round off the Italian renaissance, the Levante, big brother to the Grecale, gets V8 bi-turbo power for 2022, along with a tidy-up outside and improved ergonomics inside.

English news focuses on the latest Range Rover, which uses the more efficient BMW 4.4-litre twin-turbocharged V8 petrol engine in place of the 5-litre supercharged V8 unit. Land Rover is in some financial trouble, primarily because of its dizzying array of models and versions that are expensive to make. That hasn’t changed with the latest Range Rover – choose from a dozen versions, including plug-in hybrid, V6 and V8 power plants and a vast selection of style and interior configurations. The choice of many is the Sport, which ticks most of the boxes, being powerful, comfortable and trendier than the high-end SV. Whichever model, Gerry McGovern’s new design is next level. His aim was to create the impression of a seamless sculpture, with doors, windows, handles and all shut lines as flush as possible. To that end the lights are mostly invisible until they are turned on. Predictably, the new Range Rover has proved enormously popular with the trendy set. 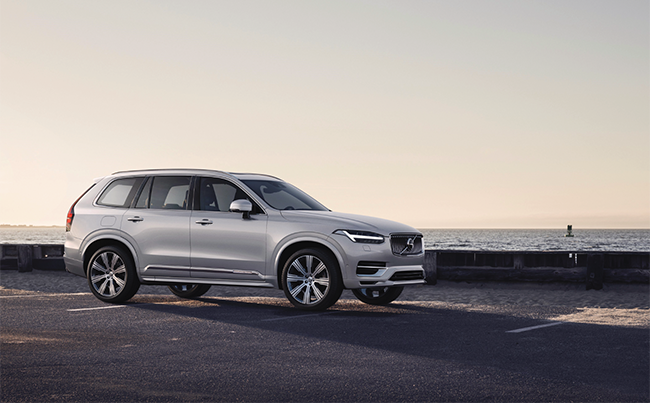 Finally, Volvo, brave when it announced in 2020 that it would be entirely electric by 2030, has introduced the XC90 T8 Recharge plug-in hybrid into SA. There’s not much new besides the platform – a good thing, as the big Swede has always been a well-thought-out SUV, especially in hybrid form. That battery has been upgraded; it features a third layer of cells that pushes the all-electric range to 77 km, vital for fuel-less city use if emissions and consumption claims are to be met. A larger battery also means it’s quicker. Expect the 100 km/h mark to be reached in a little over five seconds. All that power for an acceptable penalty – 7.2l/100 km or so, claims Volvo.

Figures for the last two quarters of 2022 will tell a tale (whether or not oil prices and the knock-on inflationary spike will dull car sales), but one thing is clear – premium SUV sales will remain strong. Global chaos ironically increases their appeal. It’s the sense of solidity, of strength when it’s most needed that underlines the SUV revolution. Indeed.