It’s a usual occurrence at around 2:30 pm or 3:00 pm. Energy levels dip, eyelids grow heavy, and it gets difficult to concentrate… The ‘afternoon slump’ is a well-documented phenomenon, where office workers lose mental focus and grow sleepy. We all have ways of pushing through the slump, whether reaching for a cup of coffee or a pick-me-up in the form of a sugary snack. We probably even know colleagues who regularly sneak a 30-minute nap in the boardroom during their lunchbreak.

The taboo against napping at work is slowly receding as more companies and business gurus adopt a ‘sleep-positive’ approach to rest. No longer perceived as slacking off, a nap during the work day is increasingly being touted as a tool to increase productivity and quality of life in general. One might argue that this is something that Mediterraneans – with their culturally sanctioned afternoon ‘siesta’, as it is called in Spain – have known for centuries.

Google famously provided high-tech sleep pods for its employees several years back, as have Proctor & Gamble, Uber, Samsung and Facebook, to name a few – the idea being that employees who are well rested work smarter and harder. And then in 2016, Arianna Huffington launched an entire campaign extolling the virtues of sleep – including napping at work – with the publication of her book, Sleep Revolution: Transforming Your Life, One Night at a Time.

Huffington said she began to take sleep more seriously after she fainted from exhaustion in 2007 and broke her cheekbone, and described the period that followed as her best years. ‘I have never been more creative, more productive, less reactive,’ she said. Huffington predicted that nap rooms would become as common in offices as conference rooms.

To establish whether napping is something employers should encourage in their employees and provide facilities for, it’s prudent to take a look at the causes of the ‘exhaustion epidemic’, of which the afternoon slump is only the tip of the iceberg.

In a healthy human – one who is not chronically sleep deprived and does not have any other underlying conditions – a little drowsiness in the afternoon could be caused by several factors, such as eating a high-GI meal (which can wreak havoc with your insulin levels); sedentary behaviour (a lack of movement means our brains aren’t getting enough oxygen); and shallow breathing (the same result as lack of movement). There is also some evidence that suggests our natural circadian rhythms cause a drop in body temperature and an increase in melatonin at around 2 pm, which can lead to sleepiness.

If employees are generally getting enough shut-eye at night, a little snooze in the afternoon can have the desired refreshing effect. ‘There are a number of scientific studies that have demonstrated that there are benefits associated with napping in healthy individuals,’ says neuropsychologist and sleep scientist Mariza van Wyk. ‘This is especially true for memory consolidation, while there is also some evidence for napping playing a role in maintaining productivity levels. What is of utmost importance, though, is to get enough good quality sleep at night. Napping should not be a substitute for poor quality sleep the night before.’

In light of this, the question of whether napping at work should be encouraged becomes harder to answer. In healthy individuals, yes, evidence suggests that napping is a positive introduction to one’s daily work schedule. When it comes to those who suffer from chronic sleep deprivation, though – which seems to be fairly widespread – the focus should unquestionably be on putting measures in place to get a decent night’s rest, every night. Expecting a short nap to offset the damage caused by a long-term sleep deficit is about as effective as putting a plaster on a severed artery. 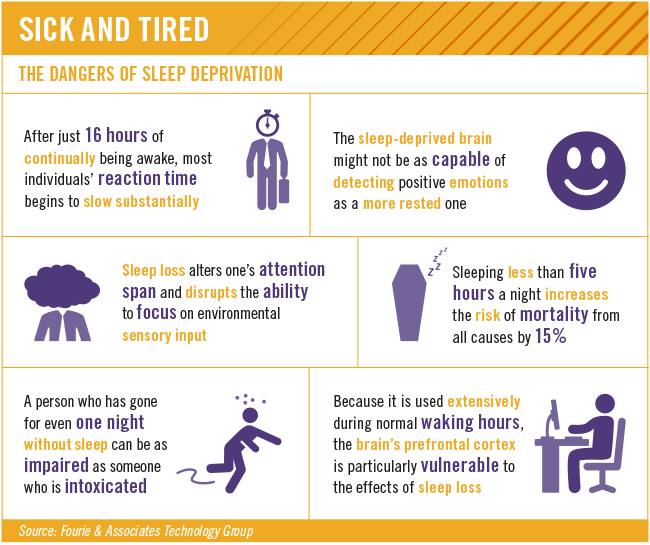 So just how sleep deprived are South Africans? ‘We don’t actually know,’ says sleep scientist Rob Henst from the Sports Science Institute of South Africa’s sleep science division. ‘Only recently have research groups started to research how well South Africans sleep. It is important to note the vast differences in sleep characteristics between our various socio-economic groups.

‘The trend seems to suggest that sleep deprivation in South Africa’s higher socio-economic groups is just as common as it is in the well-studied populations in the US – about 30% of the employed sleep fewer than six hours per day. It is likely that the causes are also similar: lifestyle – behaviourally induced sleep deprivation – poor sleep hygiene, stress and anxiety,’ says Henst.

While reliable statistics are hard to come by, it is worth noting that in 2015, sleep tracking app, Sleep Cycle, published results which showed that South Africans clock fewer hours of sleep than any other nation in the world. This is something employers should take note of. Lack of sleep costs US companies a staggering $63 billion in lost productivity, according to a September 2011 study by the Journal of Sleep. And while that statistic is seven years old, there is compelling reason to believe it may be costing the SA economy dearly as well. According to the South African Society of Sleep Medicine, about 30% to 40% of adults indicate some level of insomnia within any given year, and about 10% to 15% indicate that the insomnia is chronic and/or severe. The prevalence of insomnia increases with age and is more common in women.

Sleep pods or nap rooms may seem like a helpful, even trendy way to promote employee well-being, but it would be far more effective to address underlying causes of chronic sleep deprivation. There is, however, still a case to be made for the odd afternoon nap if you happen to find yourself dozing off at your desk. ‘If you have a strong afternoon dip, try having your nap during that time,’ says Henst.

He also recommends sleeping for no longer than 30 minutes. ‘Longer naps can induce sleep inertia – that groggy feeling after waking up – which could take you a while to get out of, making you feel worse off than before the nap,’ he says. Experiment with the time and duration of your nap to find out what works best for you. Also keep in mind that having longer naps can make you feel less sleepy in the evening, making it harder to fall and stay asleep at night.’