Local game lodges compete favourably with the best of the rest of Africa, notably the super-lodges of Kenya and Tanzania in the Maasai Mara and Rift Valley, as well as the Ngorongoro Crater.

The industry continues to diversify and grow, and it is encouraging to see previously unexplored areas attracting investment, most notably the interior regions of the Eastern Cape and KwaZulu-Natal.

That standards in these territories are as high as Kruger Park and Sabi Sands is equally heartening, and augurs well for the future.

Ulusaba Private Game Reserve
For some, it’s simply no problem – international owners throwing currency at already spectacular properties. Chief among those is Richard Branson’s lowveld property, Ulusaba, in the Sabi Sands, arguably SA’s most important wildlife territory. Branson has a long history of investment in the new SA, having committed in 1994 to a wide portfolio of interests.

Ulusaba is divided into two sections, the appropriately named Rock Lodge perched atop a koppie with panoramic views all the way across the lowveld to White river, and the cosy Safari Lodge, hidden in the undergrowth down in the valley.

In its make-up, Ulusaba – particularly Rock Lodge – is far more traditional than might be expected, given Branson’s edgy reputation (think his Barbarella-inspired, mid-century Virgin upper-class lounge at Heathrow). The emphasis is on natural materials, granite and hardwoods mostly, and the entire camp blends seamlessly into its environment.

The only suggestion of modernity is in the statue art as the Land Rovers climb the steep ascent… They’re weird, frankly –creatures appearing out of the bush, entirely at odds with the rest of the camp.

The suites exhibit a degree of modernity, with white painted concrete floors and minimalist bathroom fittings a nod to the current lodge vogue of clean and simple. Not that anyone really notices the decor – the suites are all about the views, astonishing indeed. Individual decks hang off the edge of the koppie and incorporate outside lounges, showers and personal plunge pools, very welcome in the lowveld humidity. 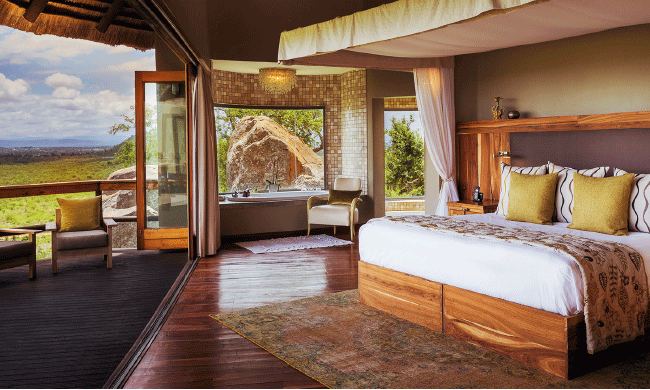 Down at Safari Lodge, the feeling is very different, the accent on making the best of the proximity to the game. So it is that the large communal deck faces a water hole and the Mabrak dry riverbed. Sitting in deep jackalberry shade, it isn’t long before elephant, plains game and a constant stream of mischievous vervet monkeys come calling.

That accent on game is even better realised in Ulusaba’s 13 000 ha private reserve – 10 minutes out, the widely held belief that Sabi Sands is the place to spot leopard was confirmed.

Having just killed an impala, a large male dragged it into a nearby acacia and proceeded to gnaw on its still-twitching head, a gruesome though unforget-table example of the beauty and brutality of the bush.

Camp Shawu
If Branson’s Ulusaba attracts London’s glitterati as well as SA high society, Shawu’s appeal is more down-to-earth. Located in the Shishangeni concession in the south-east corner of Kruger National Park, the lodge focuses on one-on-one animal encounters and, being in a concession area, can walk visitors through the bush to get up close and personal with, among others, rhino and elephant.

The lodge itself (named after one of the region’s greatest tuskers) is small, just five suites, and the emphasis is on being as environmentally sensitive as possible. So it is that the materials are natural wherever feasible – buffalo dung is mixed with other ingredients for the walls in the traditional way of the region. Thatch and ironwood predominate too.

There is also a satellite camp, Shonga, carefully placed to take best advantage of the migrating elephant herds of the southern region of Kruger. Shonga is made up of a number of luxury tents, the ubiquitous boma, as well as a beautiful common area for al fresco drinks and dining.

Though in the busiest southern section of the Kruger, both camps manage to be remote and wild, thanks to careful design and planning. 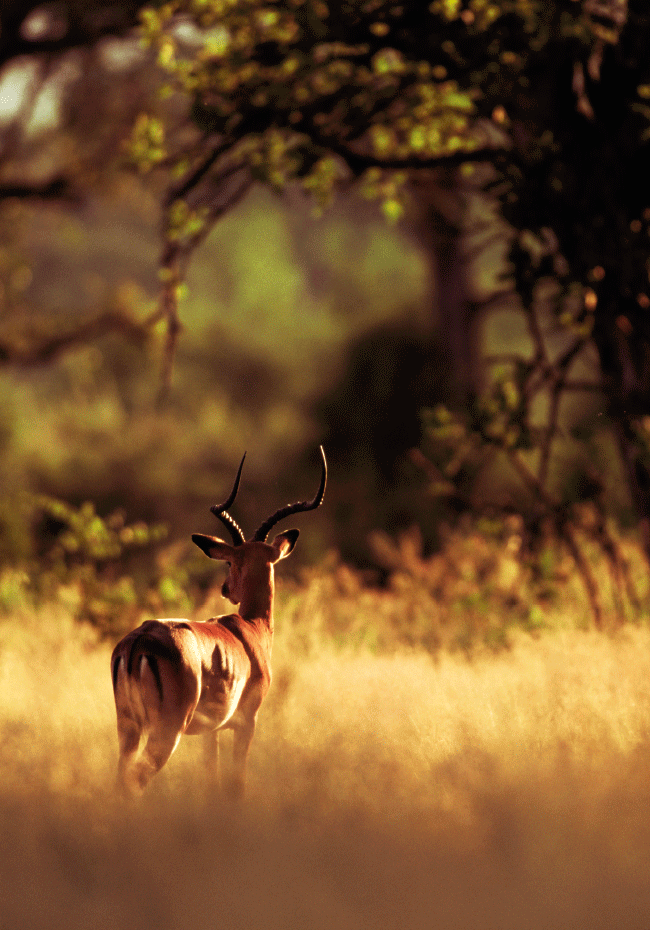 Imbali Safari Lodge
Also in the Kruger, further north than Shawu, is Imbali, near the mythical Timbavati region. Imbali is effectively central Kruger, which makes it a good destination at the end of summer when migrating herds of the north are passing through.

Of the camps at Imbali, Hamiltons is the flagship, well loved by those in the know. The accent there is on a colonial experience, or at least a cherry-picked, updated version of that. So while there are butlers and plenty of white linen
and a sense of Kenyan excess, à la the 1920s, all the modern conveniences of hot water, excellent cuisine and the latest technology for game tracking exist.

The camp is tented but it is as far from the annual Jurgens holiday at Skukuza as it’s possible to be – each suite is curated, a coming together of art and nostalgia that most first-timers by surprise.

If Hamiltons references a rose-tinted past, Hoyo Hoyo articulates a cultural present, pulling inspiration from Shangaan tradition in both architecture and cuisine.

The six huts are configured in the round for a communal feeling and dining is outside in the boma – weather permitting. Here too there is butler service, with every whim catered to.

Being in the middle of one of the most game-dense regions of Kruger, it goes without saying that the game drives are second-to-none. Indeed, in a recent TripAdvisor online poll, Imbali rated third in the country for big five-viewing (Mala Mala and Londolozi were first and second respectively).

Thanda Private Game Reserve
Thanda has been receiving a great deal of publicity recently, not so much for the award-winning Kwa-Zulu-Natal property but their latest endeavour in the Tanzanian Shungi Mbili Island marine reserve. Thanda Island is the region’s newest, entirely private island resort and echoes many of the features of the SA property.

Thanda South Africa is Christin and Dan Olofsson’s centrepiece, the Swedish couple’s plainsong to Zulu culture and wildlife. Though close to Hluhluwe Game Reserve, Thanda’s 14 000 ha are entirely private and supports the big five. Both owners are committed philanthropists – Dan through Uppstart Malmö, his Swedish charity, and Christin through the local Star for Life HIV/Aids initiative – as well as flag bearers for local Zulu culture. However, it’s the chic luxury of all three camps that Thanda is most famous for: the main nine-suite Safari Lodge, the Villa iZulu and the Tented Camp. 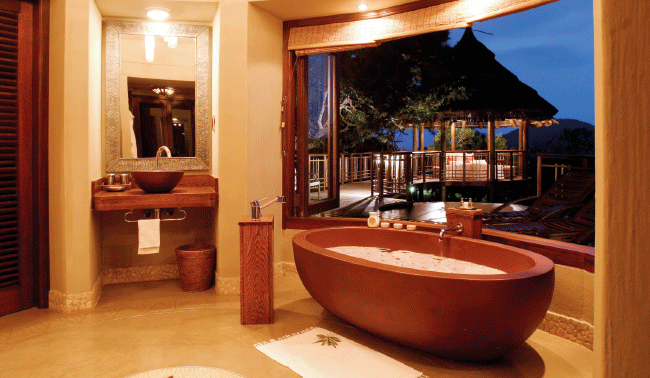 iZulu is especially attractive – a huge five-suite homestead wrapped around a snaking pool, originally designed for the Olofsson’s private use. Space – and plenty of it – is a Thanda selling point but iZulu really goes to town, with vast suites, bathrooms, a public area and pool deck under the indigenous trees. It’s ideal for a family group or collection of friends. The tented camp too is spacious – 14 suites each with their own deck and plunge pool. Pick of this tented crop is the separately located Jabula Tent; larger, more luxurious and meant as a honeymoon suite.

Kwandwe Private Game Reserve
Addo Elephant Park justifiably gets much of the Eastern Cape attention, but that’s to do some of the other, less obvious reserves and lodges a disservice. Further north (part of the Great Fish River Reserve) is Kwandwe, where the accent is
on giving an in-depth account of the bush and the wildlife in it.

It’s an approach that has paid dividends – Kwandwe recently won a 2016 Safari Award nod for Best Guiding Team. It’s easy to see how they managed this – the big game walking safari tracks not only buffalo and rhino but focuses on the environment too.

So detailed is the trek, so useful the information that guests would likely be able to survive a couple of nights in the veld if they had to. What tree collects its own fresh water? How to make yourself unappealing to predators? Tick. A great hike into the unknown. 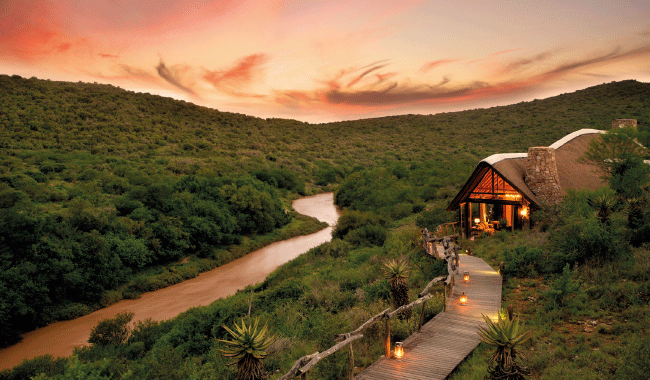 The three camps themselves are a mix of repurposed farmhouses (the Victorian Uplands Homestead), contemporary architecture (the beautifully appointed Ecca Lodge), an open-plan, family-friendly villa (Melton Manor) and the main lodge, high on a buttress overlooking the Fish River.

All deliver the kind of five-star treatment expected in this market, with the six-suite Ecca Lodge arguably the most innovative. It’s a configurable space that can adapt to visitor needs, and is ideal for larger groups.

The interactive kitchen works especially well – watch the chef create a meal (they’re seemingly trained in witty banter as they cook) or do it yourself with all ingredients provided.